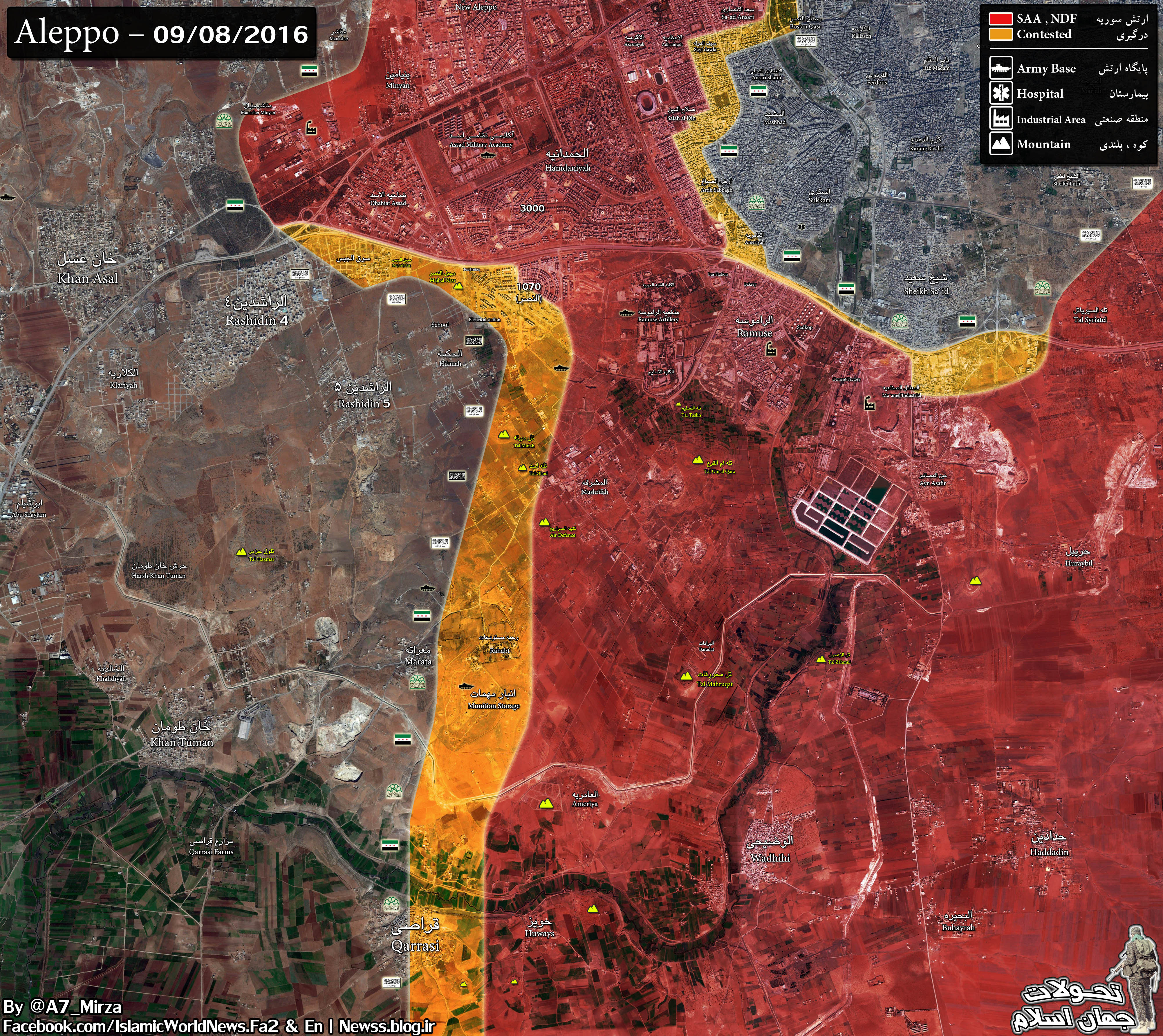 After securing the Ramouesh Neighborhood of Aleppo city, the Syrian army, the National Defense Forces (NDF) and Hebollah continued advances in southwestern Aleppo and seized the Sadkop Fuel Depot from Jaish al-Fatah militants.

Today morning, the Syrian government has opened the Ramouseh road in southern Aleppo and started to supply the government-controlled areas in western Aleppo through it. Now, the pro-government forces control the two strategic supply roads in Aleppo city:

The area of Al-Ameria is likely next tactical goal of the Syrian army and its allies in the area. Seucring Al-Ameria will allow the pro-government forces to avoid any attacks on government supply convoys heading at the Ramouseh road. In general, the mid-term goal of Syrian government in the area is to hold the siege and expand the buffer zone in strategic areas at and in Aleppo. 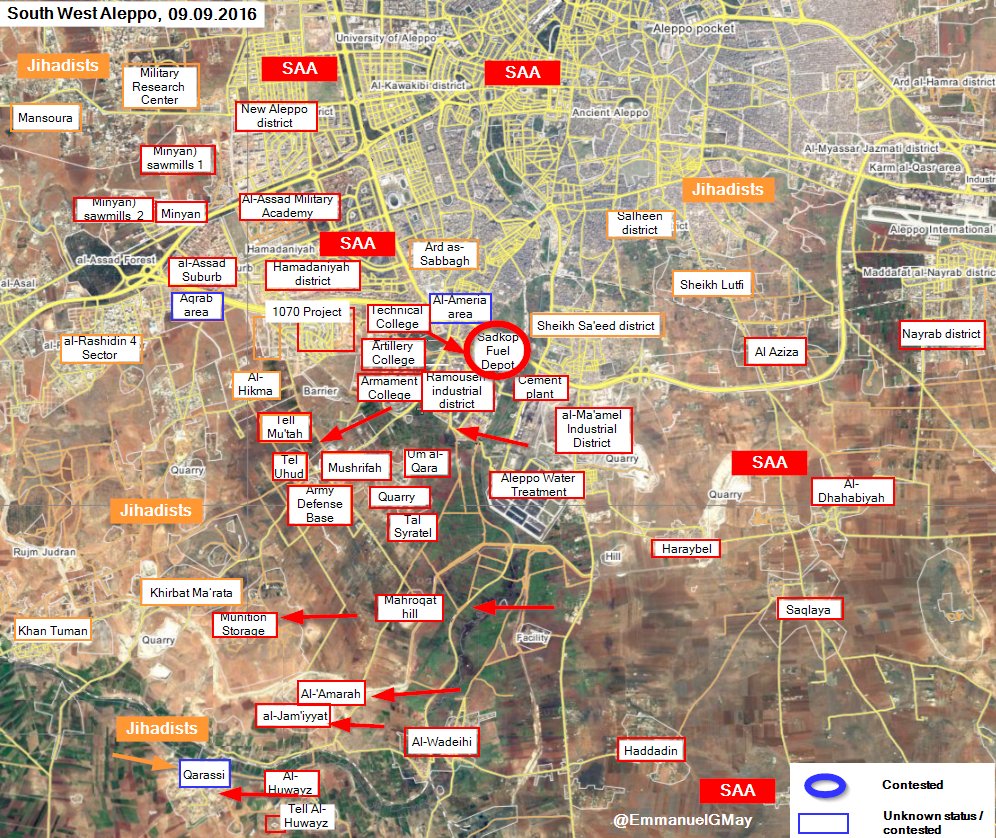 It’s expected that in coming days, the Syrian government forces will build up momentum in next directions: 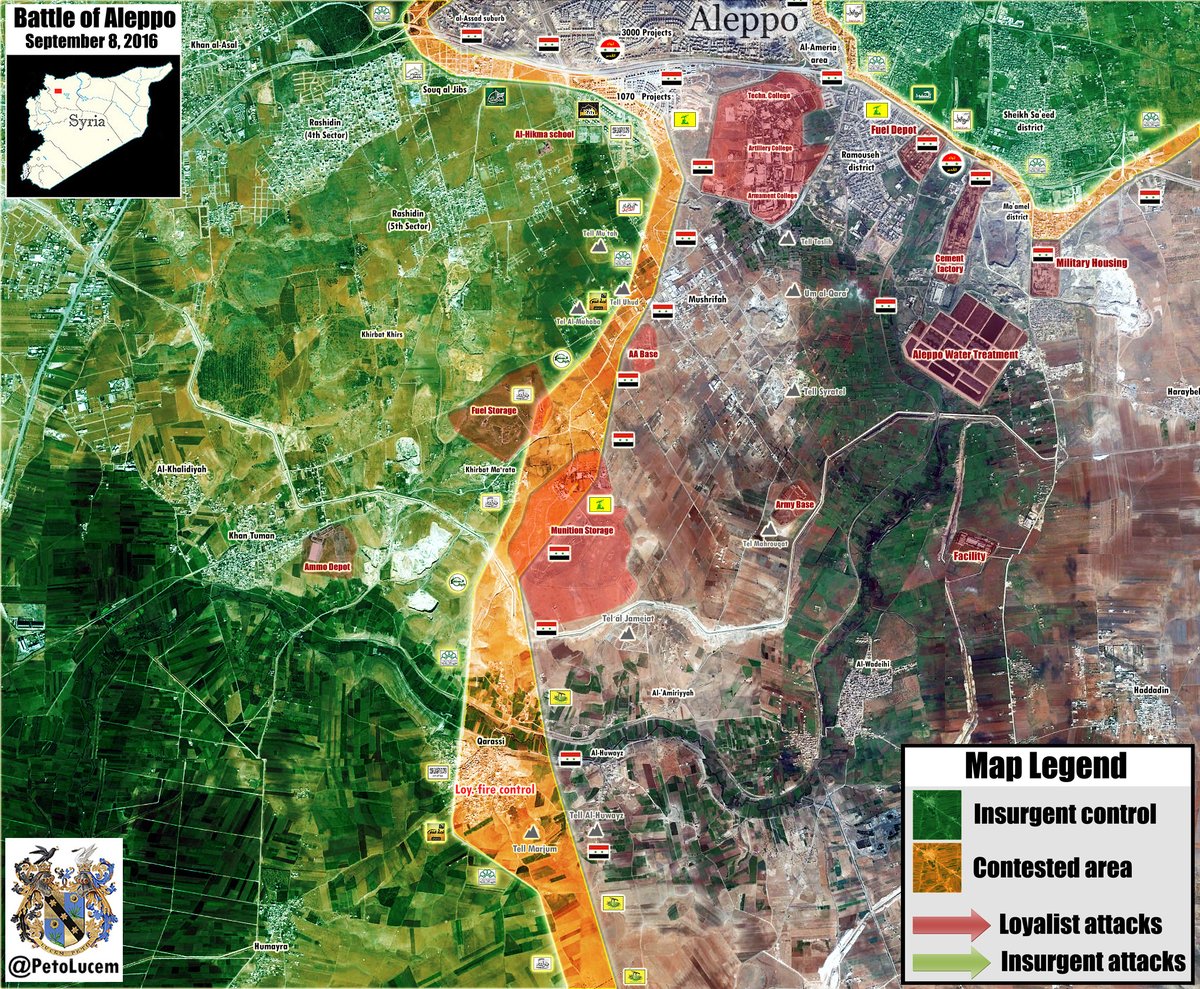 The Ramouseh Neighborhood of Aleppo City: 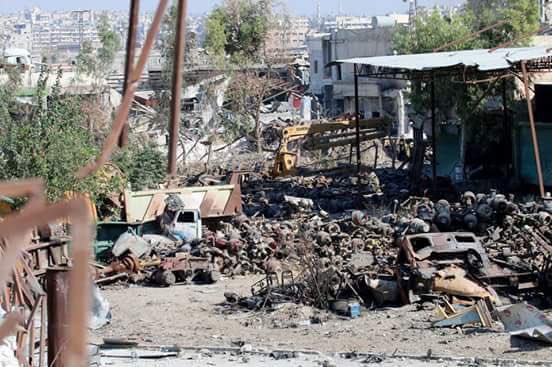 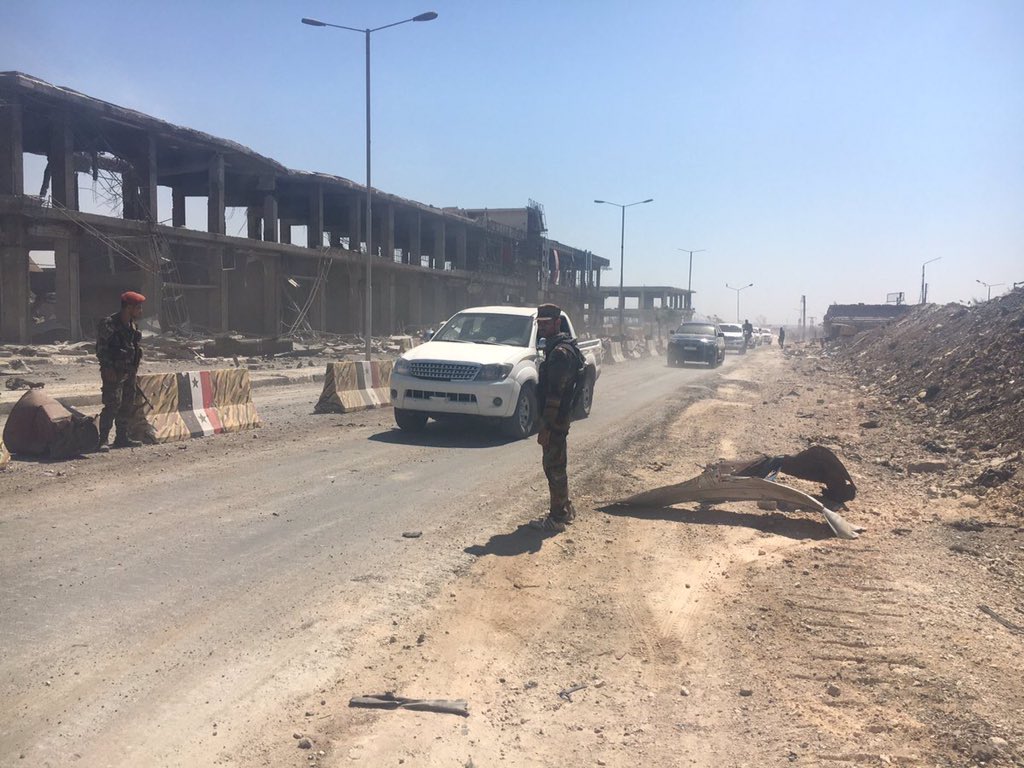 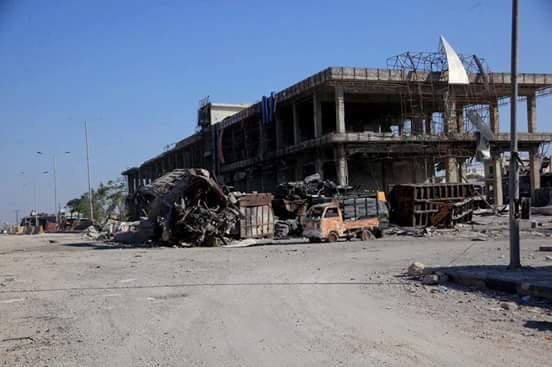 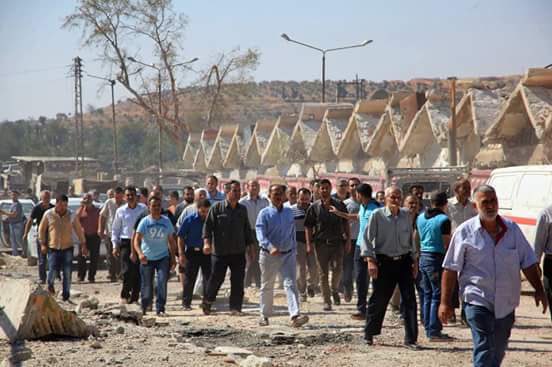 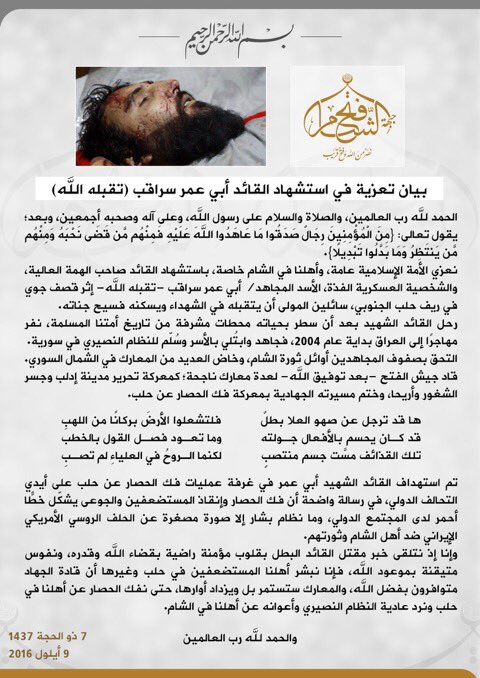 I know that there is an endless supply of anti-Assad links but this one got under my skin because it’s a pseudo military analysis … http://warontherocks.com/2016/09/what-i-got-wrong-about-assads-military-prospects/

The author bills himself as someone who thought the Syrian army was going to win but now realizes that the Syrian army is going to lose because Russian air power is not enough. That the Rebels have proved their worth by being able to counter-attack and break the siege of Aleppo and will likely do it again (I don’t believe him).

To me, it is obvious what happened. During the ceasefire, the rebels were re-supplied by the U.S. and Turkey and refitted with more rebels. When the ceasefire ended, the Syrian Army, Russians and their allies had to start their war of attrition over again. It was unrealistic to expect them to continue the break through they had when the ceasefire started. Seriously, where do they get these analysts?

“No quick advances”?? They were advancing up the wazoo, the problem was that the Russians all but stopped their airstrikes.

When the siege of Aleppo was broken, it seemed like the militants were going to win, but now that they’ve been put on the back foot, it seems like they’ve taken a huge hit from their gambit and the momentum is the government’s now. No more ceasefires, otherwise the rebels just get time to regroup and resupply, if the government keeps up the pressure, in Latakia, Hama and Aleppo, bit by bit the enemy’s territory will keep on shrinking.

at chris chuba • The funniest thing is u.S again is pushing for another truce in all regions these time.. Time for Russia to just play them full time.. If Russia fall again for this truce in Geneva, it will turn to a vicious circle and I think that is why the author feels the rebels will break the siege of Aleppo again

A truce will give them the time to finally get to Deir-Ezzor. Which is 1 of the most inportant city’s for Assad next to Allepo and Damascus.

“Fall” for the truce? It’s not about being tricked, nobody is so stupid. The RF is a rump state of a once strong souvereign nation, so these truces were enforced by diplomatic and (internal) political pressure.

For what is worth, I was always skeptical about the jihadis breaking the siege of Aleppo. Sure, they broke it, but barely: the road was always under fire from the SAA and not usable by supply convoys headed to eastern Aleppo (as the jihadis learned the hard way). Yet, to achieve this very limited tactical objective, the rebels had to pour thousands of troops in the meatgrinder, in a war of attrition that saw them pounded night and day by the Sirian and Russian aviations. Since the beginning the risk was that they would soon become too weak to be able to keep the positions they had taken back from the SAA at such a high cost. That risk turned into a fact and the rebel lines started to crumble in the Ramouseh Neighbourhood. It looks like that South-western Aleppo has been excluded from the ceasefire recently negotiated between Russia and the US.

One can also wonder if there were reinforcements to the moderate extremists withdrawn to start the Jarabulus invasion in the north.

Yeah, I think that helped too.

This logistics train of supply that you speak of, could you use a map and highlight it’s path. Did the US and Turkey use the roads? Did they fly in support?

Bab Al-Hawa is a border crossing that is easily accessible for the Turks and the Rebels in the Idlib and Aleppo province.

its no harm to read different views no matter what the bias, it definitely helps form a more rounded opinion of whats actually going on, sure some of the opinion pieces on this website are laughable but at least the military analysis is pretty decent and thats what keeps me coming back.

I think the rebels made a gamble once they saw erdogon cozying up to putin, they had one last gamble to throw everything they had at aleppo, they failed and thats that, i dont think theres another year left in this conflict thank fuck.

I follow https://mobile.twitter.com/EjmAlrai on this matter (journalist on the ground in Syria).

the rebel offensive in august was more a political move than a military one. It started with them having very heavy losses since the start, and it’s very doubtful that their moves were not known in advance. Probably they did it to signal their masters in SA and elsewhere that they were still kicking, and probably they’ve been detected by russian ew assets, as the rebels really don’t have secure means of communication and an offensive like that could not go undetected – lots of men, vehicles and supplies to be moved. Basically they expended a large quantity of reserves and put themselves in the position not to be able to attack anymore. The blogger who says the russian strikes are not enough is clearly misinformed, or biased against Assad – the russian air power is just what is needed, if more was needed it would had been adjusted accordingly. Russia has some objectives, and deployed its military according to those objectives. Most uninformed people tend to see the issue as a sort of “all-out war”, where sides exercise their maximum effort. That is not true, at least for external actors like Russia, the US or Iran. The rebel offensive of august ended after taking a couple of blocks, and really they did not open any route into the city, as said road remained under SAA fire control all the time. Rebels lost probably thousands of men, and the number of field commanders killed indicates that Russian intel worked to pinpoint the most capable leaders and kill them. The ceasefire, again seems to be in favor of rebels, as the situation on the ground now it’s in favor of the SAA, who could even liberate Aleppo, although at a cost. So it’s not clear why the russians / syrians accept to stop now that victory is in sight. One reason may well be that Turkey accepted to stop supplying rebels (at least outside its border area), so with a truce the SAA will be able to reorganize but not the rebels.

Things are going fine, the Syrian Army is now in a position to start dismantling Aleppo piece by piece. The easy win now would be to drive a wedge up to the Sukkari crossing, then take the whole of Sheikh Saaed to the east. Keeping the insurgents off balance with this it would be time to immediately delivery a knock out punch surrounnding Al-Ameria and Zarazir districts.

I’ve read somewhere that the ceasefire actually does not regard the Aleppo area. Is it true?