On March 13, the Turkish general staff said in a statement that the city of Afrin controlled by the Kurdish People’s Protection Units (YPG) had been surrounded by the Turkish Armed Forces (TAF) and the Free Syrian Army (FSA) since March 12.

The statement added that the TAF and the FSA had captured “critically important areas” during the ongoing military operation in the area. The military also said that 3,393 “terrorists” had beeen neutralized since the start of Operation Olive Branch on January 20.

The YPG is currently in a very complicated military situation because its main stronghold is de-facto isolated from the government-held area, which includes the only supply routes that could be used by the group.

Earlier Turkish sources reported that the YPG was blocking civilians from fleeing the city of Afrin. Pro-YPG sources fiercely claim that these reports are fake news.

It is not clear how much civilians and YPG members remained in the besieged city. Different sources provide different numbers.

#Drone video shows the #YPG militias blocked the way of people who want to leave #Afrin city and forced them to turn back. pic.twitter.com/YmGq9TDDhg

On March 12, reports appeared that the YPG started handing over its checkpoints in the town of Tell Rifaat, the Menagh airbase as well as few nearby villages to the government’s National Defense Forces. However, these reports have not been confirmed by solid evidence so far. On March 13, Turkish Foreign Minister Mevlut Cavusoglu said that the US and Turkey will oversee the YPG withdrawal from the town of Manbij in another part of northern Syria.

Speaking to reporters on his flight to Moscow, Çavuşoğlu said Turkey and the U.S. will decide on a plan to secure Manbij during talks on March 19. He also vowed that Turkish forces would go ahead with a military operation if those talks fail.

Turkey has not made any demands from the Syrian government regarding Manbij, Çavuşoğlu said, while adding that Ankara would “monitor” the return of weapons given to the YPG by the U.S., an issue that has strained ties between the NATO allies.

“Turkish Foreign Minister Mevlut Cavusoglu said that the US and Turkey will oversee the YPG withdrawal from the town of Manbij”.Looks like Kurds are slowly being betrayed and sold to Turks. As I was saying before, Kurts bet on wrong horse.

This is what I was telling one month ago. USA can choose to get rid of kurds and create an “arab coalition” to rule SDF.

this is the whole idea…..US has lost the game in Syria…no tries to have a new round. Together with Turkey they will preserve controll over land taken by FSA. FSA is a pawn in the US game that has the ‘respect’ of Russia as well since they are ‘moderate’, that is they can make deals, sit on the negotiating table. That buys them a role after war. on the contrary HTS ,isis are just fanatics that have to be wiped out of the planet, no other solution.As ‘Serious” states….they will get rid of Kurds, they are useless now, and create an Arab army that will control most of SYria….that is the worst scenario for after-war Syria. The country will become a failed state. it will be divided ,no central government nothing….thats the idea….US wins…Turkey wins…..Russia?what about Russia?is this ok for them after all they have done there?

Don’t let Turkey and USA ally. These stupid kurds will be sacrified. USA made PKK a terrorist organization.

It is rather funny that Turkish media is saying YPG is preventing civilians from leaving when Erdogan announces Afrin is completely cut off.

Do you guys really believe the words you put here as comments? There are southern and northern exits left for civilians to evacuate and humanitarian aid waiting for them. Shut the fuck off.

Why do you Turks-Moghuls violate international law and ignore resolution 2401 and make false claims of fighting the PKK , since they are in Turkey and not Syria.You Turk-Moghuls will be in a bad position as you seem to support Terrorist head choppers and seem to share a common ideology with them Salafi and Wahhabi are extremely conservative. Turkey may not directly financially support them as I do know the equipment supplied to them was bought by the Sauds and UAE for their financially backed groups.

I can put hundreds of western media links here which explain PKK/PYD/YPG relation in detail but it would not matter. You are here for propoganda purposes. By the way, PKK stemmed from Syria specifically from Afrin and currently has its HQ in Iraq. So, I guess you have some reading and research to do before writing down any ignorant comments like the one above.

If you can prove to me they sources can be confirmed as reliable that would be good as unnamed source or confidential source doesn’t fly with me as verification and fact are important and sources. There was the infamous IRG deputy who turned out to be a Mestarivem who leaked the story about Iran and it’s alleged nuclear program he was a known Mossad agent.

PKK is actually a Turk-Kurd group and was specifically created by the US to keep Turkey under control as you refer to Peshmerga they were created to be a counter to Iraq now if you say PJAK as this group again is controlled by the US to counter Iran. Well we know Barzani is closely associated with the Israeli Mossad , but you knew each Kurdish group has their own ideas about leadership, think Switzerland and you might understand.

Why are you just spoon fed with Turkish and west propaganda in regards with the Kurds as many just believe that nonsense without researching anything.

Seems you are the one truly ignorant not really interested in showing you to be nothing more than an uninformed troll.

Insult and ridicule are responses by those who can’t come up with a valid argument or even an appropriate response!

Insult???
Check your initial posting and then read my answers again. I am sure you will understand that who uses insulting and hate speech.

You seem to believe in the MSM and I am right your intent was an insult and please read your post carefully. There was no hate speech but only on your part by grouping all of these various Kurdish groups into one pile as that is bigotry and hatred.

You do know all people on this planet have mixed ancestry and the reference of Turks coming from Asia is just fact so hence the term Moghul as they are from Asia these are more accurate descriptions of ancestry as you have heard of these terms to describe people for hundred years now, African American or African Canadian , German American ect these terms have been around for a long time as none of us are truly in these regions first and Hence the hyphenation.

I could list the same for every group but that would be tedious and not actual racism or hate but common fact and knowledge. Some people feel an perceived hurt when there is none and that is truly what hate embodies as they are the one who are hateful and fearful of themselves.

Hide Behind
Reply to  Omer Cayirli

Too many lump Kurds into one basket.
The Kurds US support are getting stronger daily in both military and infrastructure.
As for their new Republics they are receiving millions in aid along with thousands of make believe foreign N G O personnel who are even providing school materials, light manufacturing , irrigation and agricultural specialist, and.electrical and municipal water supply technictions.
By not supeve suporting one Kurd faction they relieve others from fraction with others.

By afrin they mean afrin area not afrin city. There enough places for civilians to flee

True believers will never run away and believe i n the spirit of war. No when when surrender

In reality show how acts the self-destruction mind. (of Kurds)

Agree, I did not think the Afrin Kurds would be this weak and stupid. So Turkey will have their road between Azaz and Idlib province, and hopefully no more. Let them take care of the refuges there. Syria has lost it’s olive industry. :(

I have bad feeling from this development.
BUT! Assad is also guilty! He is stubborn nationalist. He had to allow already cultural autonomy for non-arab nations. That means, allow use of their language in offices, allow elementary and secondary schools in their language. Assad MUST make 1 step to non-arab nations.

I can confirm that a company sized group from Faylaq ash-Sham has taken Jalama and Iskaan,(SE of Jandeeris city) and are moving to Shadir and al-Ghizawya ( Yazidi village maybe already abandoned ? ). This means that the Kurdish last supply and escape route, Route 62 running south from Afrin city will be blocked. The last exit eastwards to friendly territory is at Basouta, from there on there is 10 km of impassable cliff and steep slopes with no way up for wheels or tracks. The map shows probable blocking terrain where R 62 passes through narrow defiles or choke points. Forward elements of FaS/FSA/TSK will have no problem ambushing/choking off/blocking any movement north (SDF re-inf) or south (Kurds fleeing). With the MSR R214 and R217 from Jandeeris long since cut, the whole of Afrin canton is sealed off. As for Afrin city if Turkish forces have truly seized the imperative massif above al Jamilah/Cumke -Castel Jindo the Kurds are finished. It’s too late for a no-fly-zone to have any effect, Turks can direct observed precision artillery onto YPG positions anywhere.Note the map covers roughly 7,5 x 10 km when printed to A3 size – will not upload yet, will try later

the Kurds are written of even by their leaders…..yesterday they said 2000 fighters were on route to Afrin. I think is only propaganda for ‘those about to die’….in vain…for a lost cause. Us has abandoned them. With no support from US they are just meat for the butchers of FSA ,the Turkish airforce and artillery. 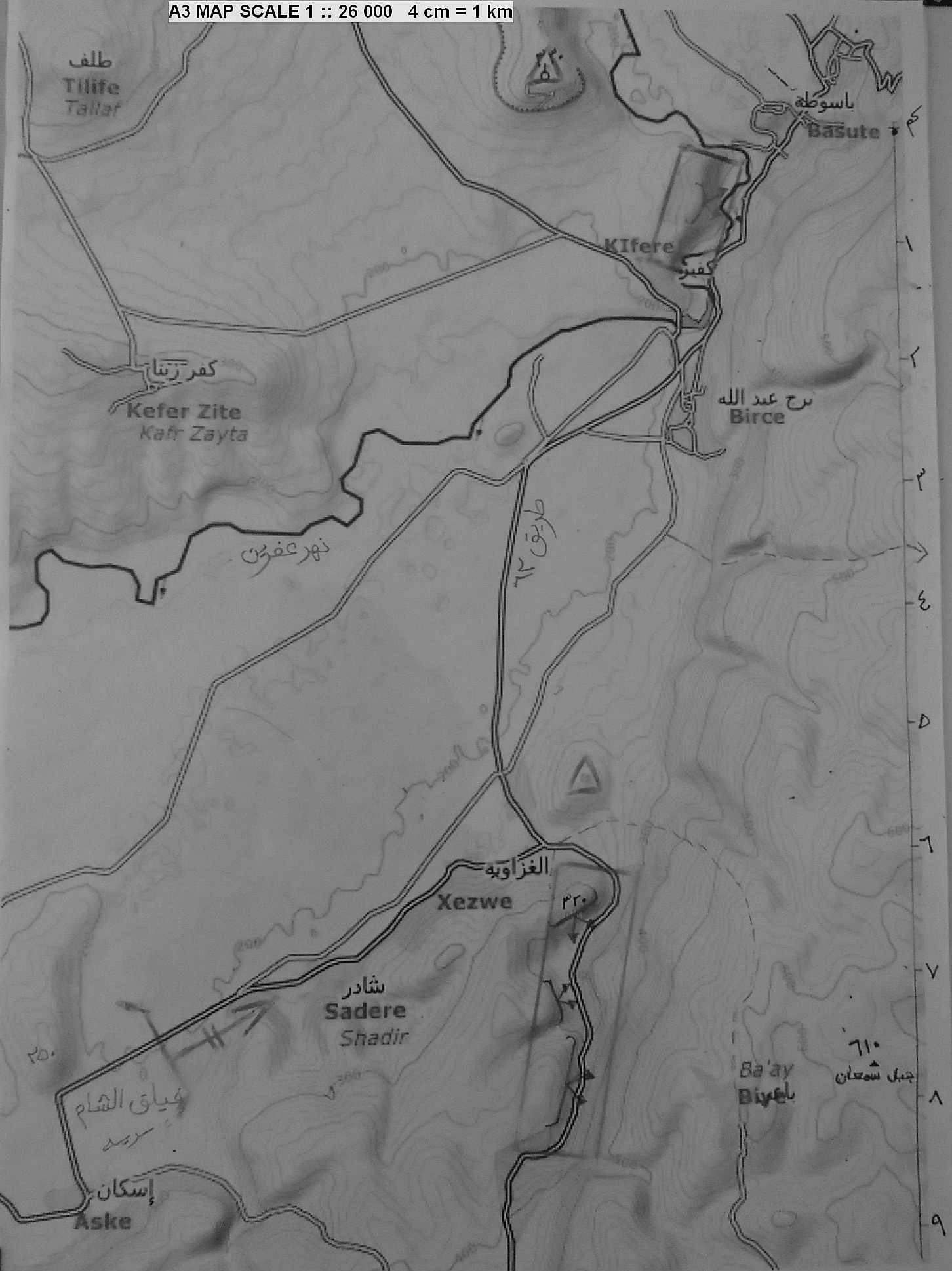 one tank is taking over Tel Rifaat???

Best comment I have ever seen on this site HAHAHA!

Now they hand over the outposts? If they had done it a few months ago there would be no Ottomans in Afrin.

stupid stupid ypg…..their leaders are corrupt like no other on earth…..

did you notice at the first video the guy with the sword…check 2.22′. the guy standing above the one that is playing with the ammo. cant really imagine what that sword is for……war crimes maybe?