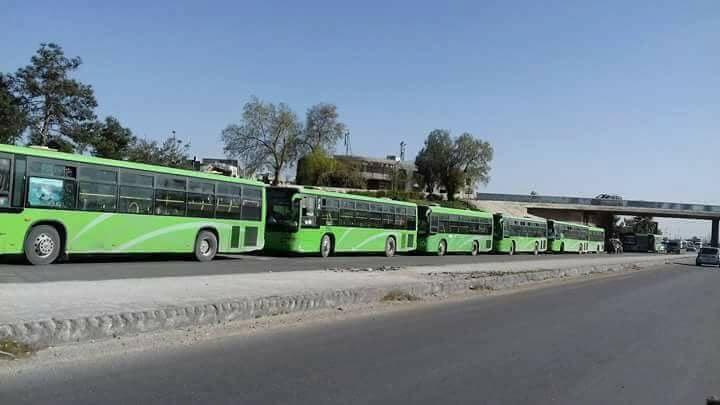 On March 22, about 40 buses arrived the area of Harasta in the Damascus subrub of Eastern Ghouta. The buses will be used to implement an evacuation agrement between the Syrian government and Ahrar al-Sham. On March 21, it was reported that about 1,500 members of Ahrar al-Sham and 6,000 civilians [mostly members of the militants’ families] will be evacauted from Harasta to the militant-held part of Idlib province. 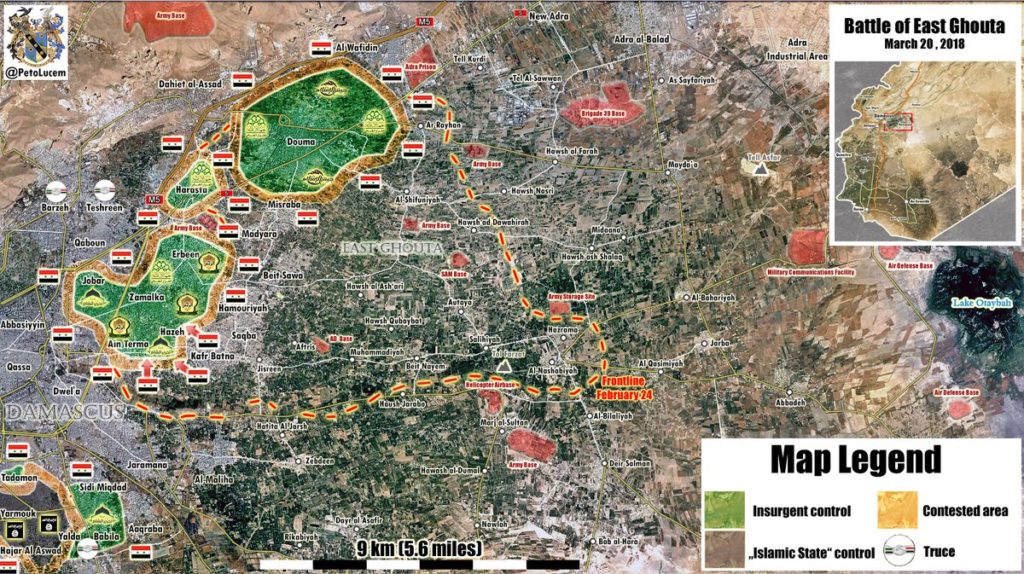 The evacuation of militants from Harasta will allow government forces to re-establish control over this important urban area and to further divide the militant-held pockets in the southern and northern parts of Eastern Ghouta. 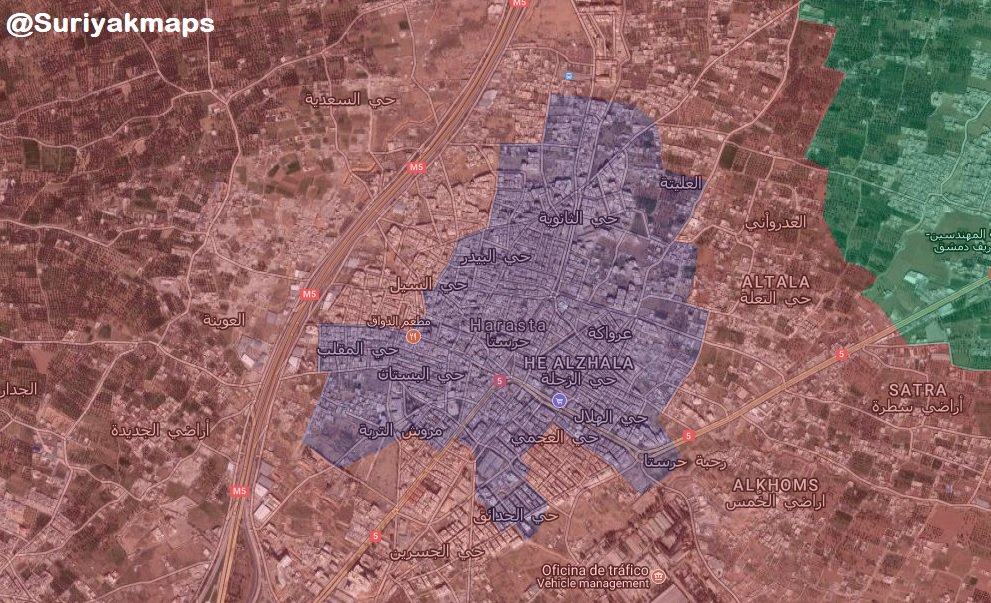 Reports appeared that 13 Syrian troops, which had been captured by militants, were also released on March 22. 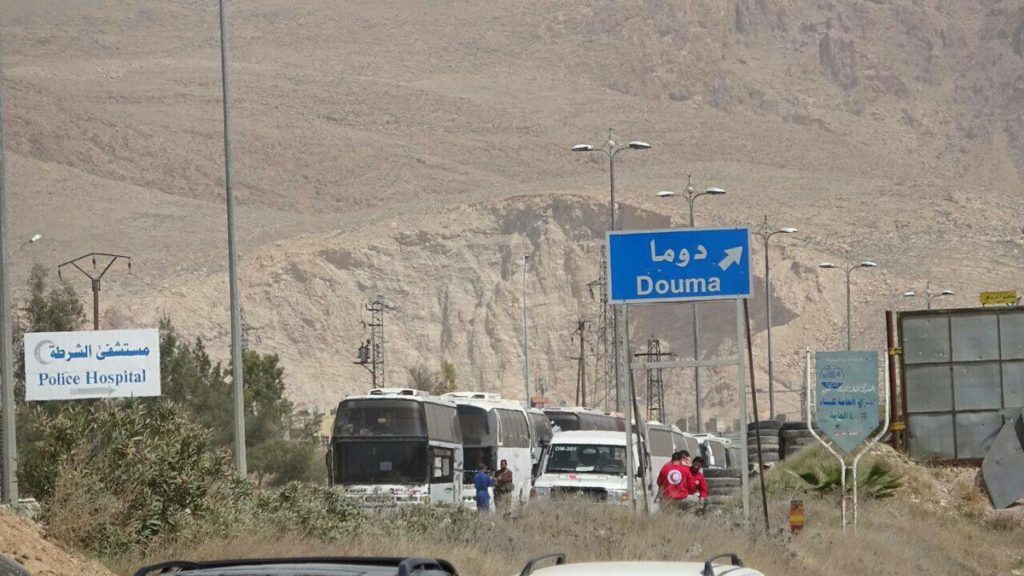 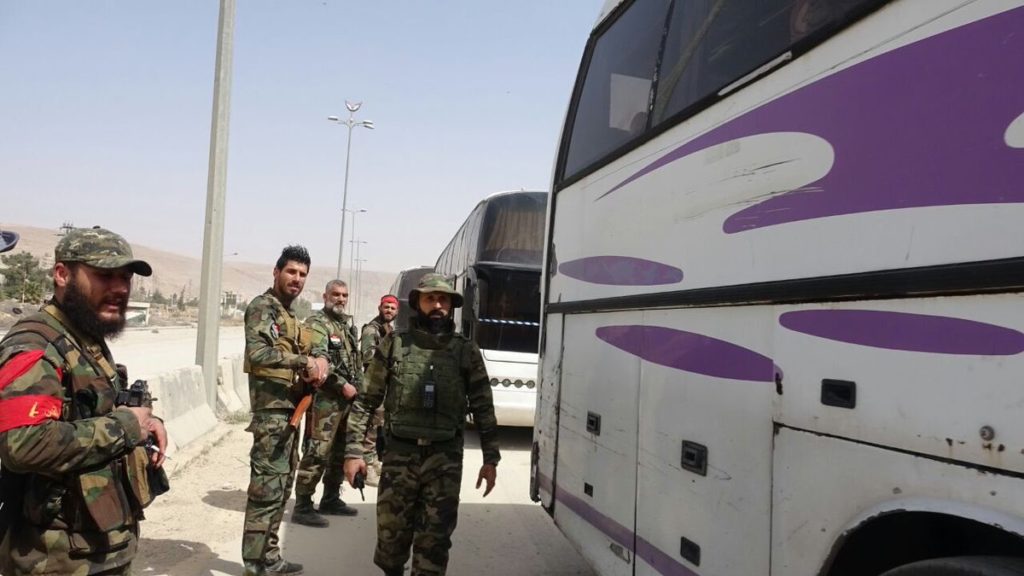 Meanwhile, an evacuation of civilians resumed in the Jaish al-Islam-held area of Douma in the northern part of Eastern Ghouta. Reports also circulate that Jaish al-Islam and the Syrian government with Russian help are currently involved in negotiations on terms of the militants surrender. If the agreement is reached, the evacuation agrement in Douma will follow the evacuation of militants from Harasta.

Clashes are ongoing in the town of Hazzah in the southern part of Eastern Ghouta. The town had been controlled by Faylaq al-Rahman and Hayat Tahrir al-Sham (formerly Jabhat al-Nusra, the Syrian branch of al-Qaeda).

Government troops entered Hazzah on March 21 and liberated a major part of the town, but have not been able to secure it so far.

On March 22, 8,000 civilians in Eastern Ghouta received hot food from specialists of Russia’s Center for Reconciliation of the Warring Sides in Syria.

“Today the Russian servicemen delivered hot food to 8,000 citizens of Eastern Ghouta, and 2,500 food parcels were handed out,” a spokesman for the center Maj. Gen. Vladimir Zolotukhin said.

The Center is now focused on evacuating civilians, providing medical assistance, delivering hot food and distributing essentials, like sleeping bags, among people at the checkpoints and camps.

Over 87,000 people have left the militant-held part of Eastern Ghouta since the implementation of the daily humantiarian pause there.

I agree. It is time to display any NATO troops embedded with terrorism in Ghouta and all over Syria.

No public displays will happen. There are already many Americans, Israelis, and Europeans in Syrian custody. It is what has enraged the western leaders recently. The captives are a dead-man’s switch for Assad. If any harm comes to Assad now none of those dudes will return home. Even Boris Johnson has been forced to say in public that “Assad must go” is now history. This may be behind the recent anti-Russian hysteria in the west, MI6 staging false flag CW attack, etc. How things have changed…

In the OBO who were losers? SDF, YPG Those nations that trust in Washington and Israel and have diplomatic relations with them would be great losers. They will suffer in their own land like Palestine, Afghanistan, Ukraine etc. Their people will be butchered, economy and natural resources will be rubbed by Washington and Israel and will never ever develop and prosper.

Whoever owns the green bus company must be a very rich dude by now. Although his drivers can probably tell horror stories about the scum they had to transport.

if you search deep enough you find jewish ownership, behind the green buses

well base on facts and knowing the participation of israel and turkey in creating isis I be very surprised if israel is not directly involved in the profit created out of a war they demanded and finance to happen. It be very anti business from their side and against their best interest.

Maybe Turkey will get something on the economic rebuilding after war, or maybe not, but Israel, as Israel, an occupant and apartheid state (= zionism), will not get nothing

directly no……….. but via their sister companies in turkey and usa and i am sure they get the lion share. You seem to forget where the global companies, all global companies, belong to one single organism, the same one who try to establish NWO over all the globe with them elevating themselves to the status of global leaders with life and death power all over others.

Well, it seems that the “one single organism” is geting some problems to impose its global status pretensions. And as a British newspaper wrote already on the nineteenth century, give 200% of profit to an capitalist and he will kill his mother, so, they will kill faster each others, in the “one single organism”, for a more modest profit. It’s one beautiful caracteristic of the imperialists, they also eat each others, and they can’t help it. But I don’t deny that, in part, you are right.

In general yes we agree. But…… wish was as simple as you put it, is not. With minus 5% give or take few units, All western world, belong to this organization. They are all employees of it in few words. Politicians – government agencies – government employees – as well the employees of the private sector.

But what worries me is the complete ignorance of fact and reality the western population live with.

From my point of view, that western organization of yours is the old western imperialist capitalism, and imperialist even before being capitalism (16th century). And you are also right saying that they are in danger of lose everything, because their peoples and countries, to not fall with, will have to be rid of them.

Already doing this for the last ten years in full speed changing the demographics of europe or you have not noticed this?

And no I am not talking of the tools used to control human cattle, by the few. Globalization has no colors or religion and definitely is not based in the ideas or the philosophies the system establishing it over you, sell to you, in order not to make waves and follow the destiny they plan for you, in the illusion that you matter and have a voice.

If you not aware then search Cromwell see who financed him to drop the king and reverse his orders, see Dutch and Indian company and who created City Of London and then proceed to colonize what today is called western world and then you know what I mean.

I think that you are meaning guys like those who have bought the write of selliing all the spices brought by the Portuguese (16th century), from their King Manuel I (start of the same century), Curious that in his reign, in Lisbon, there was the only massacre known, in Portugal, of common people of that nation (nação – nation, cristão novo – new christian, were expressions to named them, in Portugal, since that 16th century, all, capitalists and common people, but in Lisbon only the lasts were massacred, as usual). Well, if is like that, we disagree, because, for example, the Krupps were not Jews, and, also for example, Soros isn’t Jew. But this doesn’t matter, because I have some brothers of arms that think like you, if is the case, and brothers of arms are family..

Instead of guessing what I say and it has nothing to do, with what you think. Do your home work.

You didn’t mean the Jews?

:-) ok depends what you picture in your mind when you say jew because now days the word lost its meaning. But in this case no I did not mean only the jews though jews are also involved heavily in the establishment of the western NWO.

What I am saying is that is not only jews involved globalizing the globe. For me is more Them and Us. I also have difficulty understanding talmutians as anything else but religion. Because is not such a race as jews as is also not such a race as americans for that matter.

what I mention about was about the events that followed the kings order that caused the abolishment of all jewish from england. Dutch Indian Company financed Cromwell, to drop the king and reverse the order that lead to the establishment of the hard core of globalization in COL -vatikan and district of columbia. any way enough said .

Okay, now I understood in general all your point of view.

There is the cost of deep cleaning the busses after the US Proxy terrorists have had a free ride Barba :)

The green busses are owned by the government (ministry or governml. Corp. Of transport or something like that) while there are also private companies too.. their buses are usually purple or white or some other colour

They will need garden hoses and plenty of industrial cleaner to clean the filth and the smell alone from these fuckers.

U.N. declares forced relocation a war crime :-) Talk about not having any sense of perspective. They prefer the Mosul way, bury the civilians in rubble and pretend they don’t exist.

Looks good. That Isis pocket south of the city is probably next on the to do list. And the government should have plenty of clearing capacity on hand nearby from the Ghouta operation. So those Isis terrorist’s days are numbered as they face overwhelming firepower soon to be coming their way.

excellentes news for the civils from goutha!!!

And great news for the world!!!

This is good, makes the EG offensive less difficult…I wonder though, what stops Rus/SY airships to destroy these buses full of militants en-route to their destination?

Syria and Russia have always honored these agreements. This is why they work so well to clear the Jihadist out of pockets. Preventing many SAA and civilian casualties. Just keep sending them all to Idlib to fight each other. :)