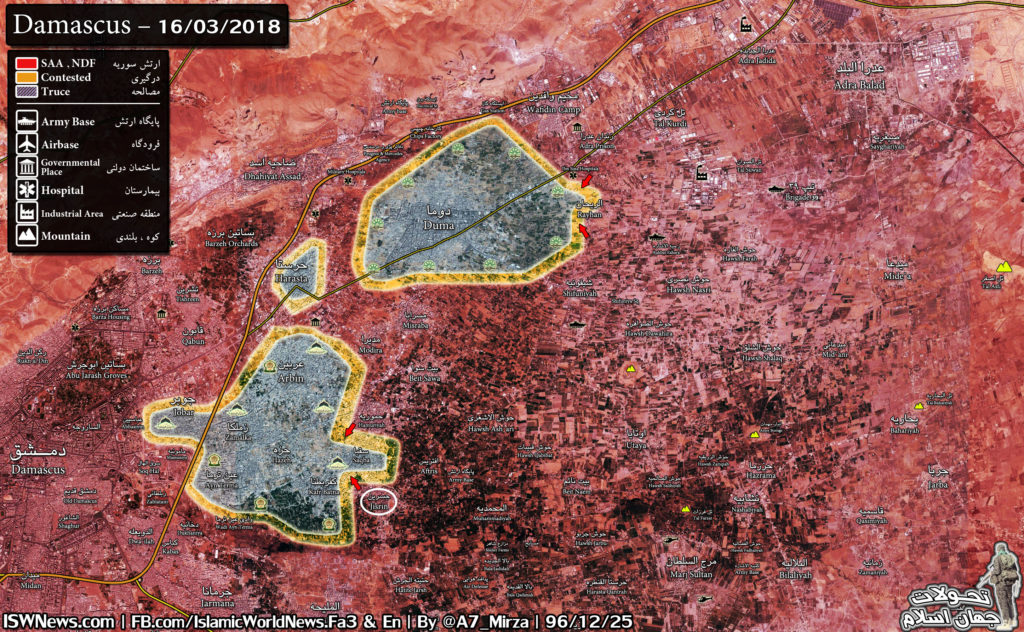 The Syrian Arab Army (SAA), the Republican Guard, the Tiger Forces and other pro-government factions are developing momentum in the Damascus subrub of Eastern Ghouta.

On March 16, government forces liberated the town of Jisreen in the southern part of the pocket and besieged the village of Saqba from the northern, southern and eastern directions. On the same day Jaish al-Islam claimed that it had downed a Syrian helicopter in the area of Douma, but these reports were not confirmed by evidence.

On March 17, the SAA and its allies continued their advance and attacked positions of Hayat Tahrir al-Sham in Saqba. Clashes are ongoing in the town’s vicinity.

“At the moment 11,300 people have left [the area], on average over 3,000 people per hour are passing through the humanitarian corridor,” Maj. Gen. Vladimir Zolotukhin, the spokesman for the Russian Defense Ministry’s Reconciliation Center for Syria, said on March 17.

The evacuation of civilians is an important part of the wider effort of the Syrian and Russian forces to re-establish security in eastern Damascus.

In the USA/NATO grip

During the first half of March, two major war exercises are underway – one in the Mediterranean off the coast of Sicily, the other in Israel – both led and supported by USA/NATO commands and bases in Italy.

At the Dynamic Manta 2018 – a submarine war exercise, supported by the Sigonella and Augusta bases and the port of Catania in Sicily – naval forces from the United States, Canada, Italy, France, Belgium, Germany, Great Britain, Spain, Greece and Turkey participate with 5,000 men, surface ships, sub-marines, airplanes and helicopters.

The purpose of the Dynamic Manta 2018 is explained by Admiral Foggo: the United States is fighting the “Fourth Battle of the Atlantic”, after those of the two World Wars and the Cold War. It is fought against “increasingly sophisticated Russian submarines that threaten the sea lines of communication between the United States and Europe”. The Admiral accuses Russia of conducting “an increasingly aggressive military activity”, citing as an example the Russian fighters flying over US ships. However, he does not say that these warships operate in the Baltic and Black Sea near the Russian territory. At the same time the US Global Hawk drones, taking off from Sigonella, fly two or three times a week along the Russian coasts on the Black Sea.

From the base of Gaeta, Mount Whitney, the flagship of the Sixth Fleet, arrived in Haifa, accompanied by the amphibious assault ship Iwo Jima. The Mount Whitney is a floating headquarters, connected to the global command and control network of the Pentagon also through the MUOS station of Niscemi.

The Juniper Cobra 2018 – which involves 2,500 US soldiers and as many Israelis – began on March 4, while Premier Netanyahu, meeting with President Trump, claimed that Iran “has not renounced its nuclear ambitions” (not saying it is Israel the only nuclear power in the Middle East) and concluded “Iran must be stopped, this is our common job”.

The exercise simulates the Israeli response to the simultaneous launch of missiles from Lebanon, Iran, Syria and Gaza. The real scenario may instead be that of a missile launch falsely attributed to the Lebanese Hezbollah allied with Iran, as a pretext to attack Lebanon by targeting Iran.

Just 72 hours later – US and Israeli officials declare – US forces would arrive from Europe (in particular from bases in Italy) to join the Israeli forces in the war.

The presence at Juniper Cobra of General Scaparrotti, head of the European Command of the United States, confirms this plan, which he defined at a meeting with the Israeli general staff on 11 March.

Since Scaparrotti is also the Supreme Allied Commander in Europe (a position that always belongs to a US general), the plan foresees a NATO participation, above all Italian, to support Israel in a large-scale war in the Middle East.

Syria, Afrin Report – 19 civilians killed by Turkish bombing in the center of the Syrian city of Afrin. Here’s the video: https://videopress.com/v/KIorqTXf (STRONG IMAGES)

With the exception of some new-looking mortar base plates, much of this equipment looks like it has been in somebody’s arms locker far too long.

Those idiots would probably use them as mortar base plates but I’m pretty sure they are satellite dishes for communication with their masters. Which could very well mean that they’ve lost the ability to communicate with them at the moment. That would be excellent!

Another 7 days tops and the Southern most picket will be liberated by the SAA from Al Qaeda / ISIS /Israel, maybe sooner.,