The Syrian armed forces, backed up by Russian strikers, repelled a terrorist offensive near the city of Aleppo, killing over 800 terrorists and destroying 14 battle tanks. 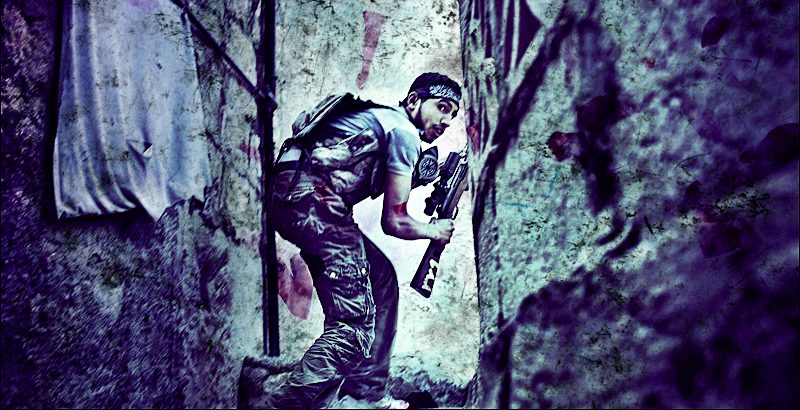 Over 800 terrorists were killed and 14 battle tanks were destroyed by the Syrian armed forces, backed up by Russian strikers, during the repelling of a terrorist offensive near the city of Aleppo, the Russian Ministry of Defense has reported.

“The Syrian army troops and Russian air force repelled a massive militant attack today. More than 800 militants were killed, and 14 tanks, 10 infantry fighting vehicles, and more than 60 technical vehicles with mounted weapons were destroyed,” the Chief of the Main Operational Directorate of the General Staff, Lt. Gen. Sergei Rudskoy said on Monday.

Rudskoy noted that terrorists continued to prevent the local population’s escape from the combat zone in an effort to use them as human shield, and pull reserves from other areas in an effort to undermine the government troops’ resolve.

“Thus, the terrorists executed four people attempting to exit through the humanitarian corridors yesterday in the Eastern part of Aleppo,” he said.

The lieutenant general pointed out that Russian aircraft do their utmost to avoid collateral civilian damage by not targeting populated areas within city limits, unlike the US-led anti-ISIL coalition active near Manbij.

Russian air strikes were also reported in Sarmin and Saraqib in Idlib countryside.

800 terrorists in a two-day engagement?! Does South Front consider this to be possible? This is really good news if it is destroyed.

over 10000 Terrorists ae involved in that.. considering the Size of that massive battle id say yes it is Possible.

yes, it is. And it would be even bigger number, if Russia would use Phosporus and Napalm, not only explosives.

That is a real battle, where you have serious casualties, the jihadi staging areas and avenues of approach were pinpointed and bombed accordingly by the Russian Air Force. This is indicative of jihadi inability or wage a conventional attack without proper arms coordination and without air support operating in civilian areas.

And it is real battles (full out war) and not this pin-pricking, which has been going on for 5.5 years now, which would ever end the war.

The reason I said the way I said it because you read headlines of great battles and only 10-15 casualties. Great battles involve large numbers of troops with large quantities of equipment, large battles cause large casualties.

It’s been more than two days. There were counter attacks on Mullah farms after the Tiger forces established fire control over that last highway at least two weeks ago.

In some major WWI and WWII battles there were thousands and 10s of thousands killed per day. Actually, I have been thinking all these years of the Syrian war, that the Syrian government forces would need to kill almost a 1,000 everyday for a few months to wipe out the rebels and end the war quickly. That is full-out war. At the current pace of, what seems like, a couple dozen of rebels a day, the war will never end, especially since Syria doesn’t have control of most of its borders and fighters from all over the world keep streaming in.

Also there were over 100 sorties (air force) raids). So it is possible.

“The lieutenant general pointed out that Russian aircraft do their utmost to avoid collateral civilian damage by not targeting populated areas within city limits, unlike the US-led anti-ISIL coalition active near Manbij.”

This is stupidity. Most of these are terrorists, their families and supporters. Plus, a certain amount of true collateral damage (i.e., people not terrorist families and supporters) cannot be avoided in war, and the responsibility for their deaths would lie with the jihadi terrorists who did not allow them to exit the warzone. The enemy does not spare Syrian civilians or captured Syrian soldiers; tortures and executes prisoners-of-war, and deliberately attacks civilians in government-controlled areas. When pressed too hard, the terrorists can simply sit out the assault of the Syrian-Russian forces by hiding out in these “populated areas within city limits”, which they know the Russians won’t bomb. The priority should be to wipe out as many of the jihadis as possible, as quickly as possible, without worrying too much about collateral damage. Otherwise the war will drag on and on, without victory, and with many more people killed.

Tactic so well developed in Croatia, Bosnia and Kosovo by American retired generals, actual commanders of Croatian, Muslim and Albanian forces in former Yugoslavia; the tactic that induced a tremendous outcry about the violations of human rights that served the purpose of being a pretext as for NATO air campaign against Serbian forces in 1999.

NATO and its proxies purposely went after the Serb civilians – especially once the Serb forces were removed from any area. The Serb civilians were stripped of any protection and they were then kidnapped, tortured and killed – though some of the young and healthy had their organs taken out and sold to Italy, Israel, etc.

And in BiH, especially, the war was very staged – with cameras in place at perfect, yet safe position, to capture the explosions as they happened. The Bosnian Muslims also had the most snipers and they were witnessed by UN officers/personnel shooting at civilians (including within their own lines) and at UN personnel. They used “several buildings” in the infamous “Sniper’s Alley” according to testimony of UN staff at the ICTY. The fact that the media would automatically blame Serbs actually gave the Bosniak forces a blank check and motivation to keep killing civilians – they knew they wouldn’t be blamed but Serbs would be demonized. There was NO MILITARY ADVANTAGE to Serbs to pick off civilians in a closed part of the city (and it was closed off because the Bosnian Muslim government/forces would not allow people to leave in the part of Sarajevo they controlled). In the Serb-controlled part of Sarajevo (which included some of the suburbs) people were free to leave.

Yeah. A Portugese serviceman a member of UN Police Force in Bosnia (2*6 months) told me a similar story. How is it possible for Americans to exercise such a power over UN officials to cover up all these crimes?