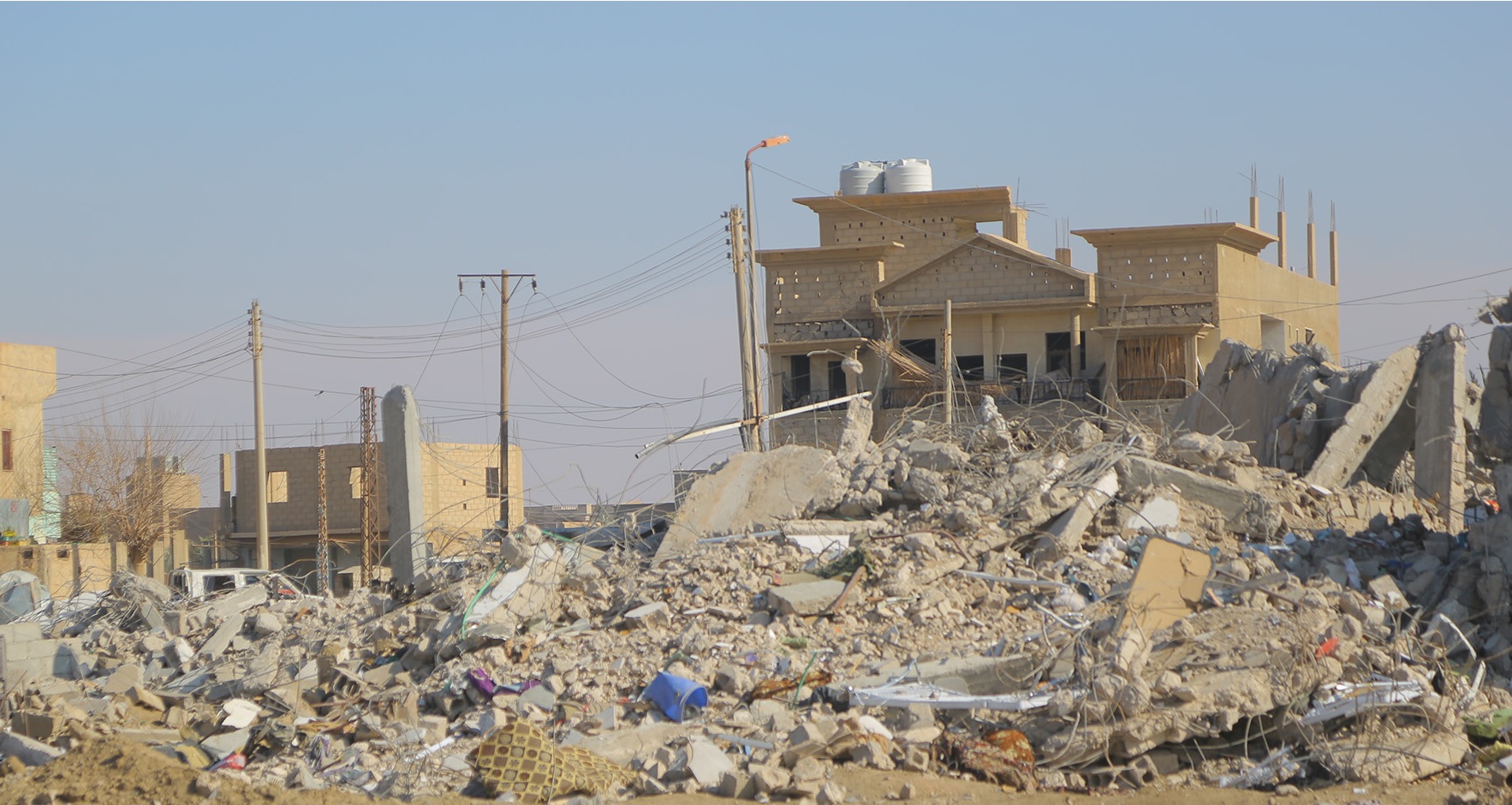 On July 12, warplanes of the US-led coalition conducted a series of airstrikes on civilian buildings in the villages of al-Baghuz Fawqani and al-Susah in the southeastern Deir Ezzor countryside, according to the Syrian Arab News Agency (SANA). The state-run agency said that more than 30 civilians were killed and dozens others were injured as a result of the coalition’s airstrikes.

Hours later, the Syrian Observatory for Human Rights (SOHR) reported that the number of casualties has risen to more than 54 civilians, including women and children. The pro-opposition monitoring group also accused the US-led coalition of carrying out the deadly airstrikes.

US-led coalition spokesman Colonel Sean Ryan told Reuters that coalition warplanes “may have” conducted airstrikes on al-Baghuz Fawqani and al-Susah in the last 24 hours. Col. Ryan added that the report of civilian casualties was being forwarded to the “Civilian Casualty Cell for further assessment.”

This is not the first time the US-led coalition is accused of committing massacres in Syria. According to SOHR, the coalition killed more than 3,300 civilians since the beginning of its operations in the war torn country in 2014.

The intense bombing on al-Baghuz Fawqani and al-Susah is likely a part of the preparations for a new military operation against the remaining fighters of ISIS along the eastern bank of the Euphrates River. The US-led coalition and its Syrian proxies may launch the operation in the upcoming days, if not hours.

Russia and Iran have defeated ISIS in Syria. Now Russia, Iran, China and Pakistan want to stop ISIS expansion in Afghanistan while having questions about unmarked helicopters flying ISIS to Afghanistan and US are ignoring it. Does it not make sense who is behind ISIS and who is against? These 4 countries and others in the region must unite against repeated terrorist activities that backed by US and their nonsense allies. Hope these professional global killers will go down soon.

Putin SUPPORTS the infrastructure that built ISIS 100%. He sells the s400 system to every member of the wahhabi bloc. He arms all the forces behind ISIS like activity outside of Syria, like the nations funding Boko Haram.

Putin’s votes at the UNSC have been 100% pure zionist evil. Putin voted to make all weapon supplies to the defenders of Yemen ILLEGAL, and them immediately offered Russia’s best to saudi Arabia, for instance. It was Putin’s vote IN FAVOUR of a NATO no-fly zone over Libya that ended Libya.

Putin is just another zionist monster. Never forget that he forbade Russian involvement in Syria until AFTER the West had wrecked that nation on behalf of Israel, and ruined the lives of tens of millions. When Putin did send the forces in, he boasted it was simply to train Russian forces in a ‘live fire’ arena, and to help sell Russian weapon systems.

Putin’s partying with the jew butcher of Israel was the end of it for me, and many others.

You want to watch that video I’ve been posting here, Rob, and try to recover a little of your lost Humanity. Those Cameroon butchers, proud to be filmed killing women and little kids, felt they were doing no more than the jew snipers carrying out their PUTIN APPROVED atrocities in Gaza. Putin feeds the jews monsters, and the jew monsters feed all the other lesser monsters on our planet. Putin isn’t ‘saving’ the planet- he’s condemning it to hell on behalf of the jews he so willingly serves.

Don’t waste your time here because everybody knows you.

The background of the airstrike

This video shows an official American supported Cameroon deathsquad, trained in Israel, operating according to ‘Gaza’ rules. The deathsquad is based in a joint Israeli/French/American facility. And news sites like SF have been ordered to blackout the video.

SF claims the Americans are targeting ‘terrorists’ in Syria and ‘accidently’ kill civilians. Putin has said this same lie over and over again. The Cameroon video PROVES the West directly and intentionally murders women and children.

I Have seen your movie….yeah Sick motherfuckers… Supported By the U.S. & IsraHell… But the Russians & Chinese hopefully will bring a little bit more peace in Africa…After you All are Kicked out… Bunch of Zio-Christian

The “Hasbaras & other Trolls” I Meant……

There are Israelis in South front that remove my comments.

Yeah I have the same problems, things get Censored, can’t open stuff or it is changed…they also can change things when they are inside your Phone… I don’t care… I drop it Again & and Again… Repeating the Common Thread… the Fact they are Doing what they are Doing Means they don’t like it…. Which is Great because the IDF & Satanyahoo are a Bunch of KidKillers… and they love doin’ it… so we keep Kicking them in the Nuts until they are Convicted for Warcrimes & Crimes against Humanity…

Here this is a simple Answer to their Censorship:

Rob: https://youtu.be/RrJ1wi8SJtA Pakistan, Russia, Iran, China secretly meet in Islamabad … — disq.us Published on 12 Jul 2018 click on link for better view. Russia and Iran have defeated ISIS in Syria. Now Russia, Iran, China and Pakistan want to stop ISIS expansion in Afghanistan while having questions about unmarked helicopters flying ISIS to Afghanistan and US are ignoring it. Does it not make sense who is behind ISIS and who is against? These 4 countries and others in the region must unite against repeated terrorist activities that backed by US and their nonsense allies. Hope these professional global killers will go down soon.

Thanks…. I am always fighting with Open Visor… Kicking against their Castle doors and asking them to Come Out… No Secrets..they know who I am..for I am Me… and I Demand My Freedom of Speech… They can take me to Court & I will Fight them there… or they can Hack my Smart-Car and Park it into a Wall… Fear for them? These Sneaky Cockroaches hidden in the Dark? Not in a Million Years…..

Again Thanks…but I save it All…Have backed it up… and Everyone can read what I think… I was Raised a Free Man… and I will stay a Free Man…..Freedom of Speech is one of it’s Virtues… if They try to Seize that…..I can only say: Bring it on… Going back to factory settings is always a good one…but temporary

I dont think so, you paranoid git.

Look at the top right, just before the comments section – “sort by”…. make sure that is on the latest = newest.

Detected as spam message comes and then my comments disappear.

Yeah…if you paste same thing in many articles wich you have done, its easy to highjack that as spam, solomon and his buddies can do that pretty easy.

Note – someone (troll you crossed) may be constantly flagging your comments as spam. To avoid this do not cut and paste the same material, rewrite uniquely phrased content. If your on homepage your recent comments have red banner saying flagged as spam and it’s being looking into, the whole ‘are you a bot’ routine may start. This will mean having a capcha picture match-up to log in each and every time – it is tedious. If that starts and continues, change your password, it appears to solve these issues.

OH I SEE, he was doing his cut and paste thing on all articles again…. it drives me bloody mad, but he is not a troll (my view), just a bit of a prick some days.

Oh my apologies, but I have had it myself on other sites BUT NOT ON SF. BEFORE you proportion the blame, just check please. Look at all comments below.

Read Bob’s message. Even I got angry with you when you posted on every article the same stuff about Palestine recently. Please stop doing that, as people do get a little fed up with it. Same as my swearing + many other things.

PS Go down the page and see if a comment was deleted. One was under moderation for some reason.

The claim by SOHR wad 28 civilians and 26 ISIS killed but according to body count and eyewitness reports 54 civilians were killed.

So, should the Syrian Government threaten to attack JFK International Airport with Cruise Missiles? In order to teach the US Regime a lesson and to ward off future possible attacks from Mad Dog Mattis, Don the Bomb Trump and their FUKUS Criminal Cartel….. Seems like a good fuckin idea

Russia and Iran have defeated ISIS in Syria. Now Russia, Iran, China and Pakistan want to stop ISIS expansion in Afghanistan while having questions about unmarked helicopters flying ISIS to Afghanistan and US are ignoring it. Does it not make sense who is behind ISIS and who is against? These 4 countries and others in the region must unite against repeated terrorist activities that backed by US and their nonsense allies. Hope these professional global killers will go down soon.

I have a terrible feeling, in that, before the US withdrawal or get kicked out, there will be a great deal more damage done to both infrastructure and unfortunately more civilian casualties.

The oil fields will be flattened + I still by my original statements years ago, that the dams will be damaged beyond repair (so far I have been proven wrong), in fact I hope I am.

The SOHR is not Assad freindly and so this report accusing the US of causing high civilian casualties is significant.

The article ends with a bizarre statement that the bombing was in preparation for further actions against ISIS. ??? I would not characterize the bombing of civilian targets this way. I think the US strike has a different purpose which is to send a message to Damascus. Like before, this will fail to intimidate Assad. Assad and his allies are coming.

This is just another war crime tantrum by the satanic zionists because they have lost the war…They will pay dearly for these outrages,sooner rather than later.The Synagogue of Satan.

Of course SANA says all the deaths are civilian, and of course everyone calls this a massacre while Gouta was… I ask why exactly was the strike carried out, and I will be back in a while when I find what other sourses say.

Ok, I only could find Arab and Russian articles on this so far that admit that details are sketchy. One said 54 were killed including ISIS fighters and civilians, while another said that at least 7 pro-government soldiers were killed. One headline said the targets were in a civilian area while another said that army positions were targeted. . So I say we suspend judgement for 24 hours.

OK. So some civilians were killed. Were they regular Syrian civilians or ISIS family members located in buildings where ISIS tries to hide operation headquarters and conduct meetings with field commanders?

Ofc for what else are capable those incapable US whores, just killing civilians. Remember one thing USA, what comes goes around, comes around. One day you will get a taste of your Aledget successes.Bastards.