More than 130 pieces of heavy military hardware have arrived to Estonia from Germany and the UK. 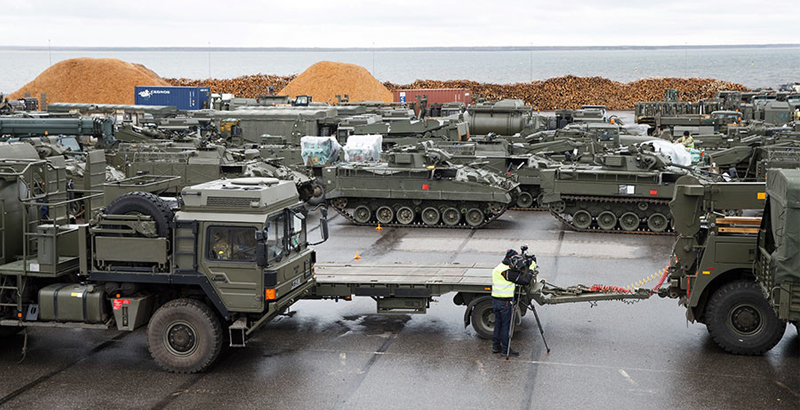 British tanks and military vehicles are unloaded at the port Estonian of Paldiski on March 22, 2017 (Photo: AFP / Raul Mee)

Dozens of self-propelled artillery guns, tanks and other military hardware have started to arrive in Estonia from Germany and the UK. According to UK Defense Secretary Michael Fallon, this is the largest deployment of NATO forces in Eastern Europe since the times of the Cold War.

As the UK Ministry of Defence reported, first of hundreds of UK military vehicles have arrived from ports in Britain and Germany to Estonia on Wednesday. The military hardware was delivered by a ferry.

According to the ministry’s statement, the military hardware, which includes the Titan, Terrier and Trojan armored battlefield engineer vehicles, the Challenger 2 tanks and the Warrior infantry fighting vehicles, will be sent to a military base in Tapa.

Reportedly, the main goal of the delivery is to support a British battle group in Estonia. The UK Defense Ministry stressed that it is “one of the largest ever NATO deployments” to the region.

“This is the start of one of the biggest deployment in Eastern Europe since the Cold War,” Fallon said and added that there will be “800 British troops, with armor, with tanks” in Estonia, close to Russia’s borders, by the end of April.

In addition, over a hundred of British military personnel have already been deployed to Estonia. As the Interfax news agency reported, citing the local Postimees newspaper, French, American and German troops have also arrived to Estonia within NATO’s international battalions. It is expected that some 1,650 international troops will be stationed at the Tapa and Amari military bases by the end of next month. The Amari base is persumed to host the NATO’s air forces from Germany.

NATO has justified the arrival of the vehicles and military personnel by boosting security in the region against hypothetical “Russian aggression.”

A battalion is hardly a threat.

Easiest place for Russia to destroy those vehicles were they so inclined. Anyway I’m getting very tired of the EU sable rattling to prevent them addressing the internal problems.

Trump proving to the world he’s the same shit as all other US leaders. Because US is a company not a country, and their presidents CEOs at the service of their Jewish owners.

The US is a nasty thuggish empire.

I think thoes troops were put into place for many reasons of course.One of the main being to prevent a Crimea type takeover.Like to fight against the little green men. If Russia were so inclined Russia would plow through thoes troops

More pointless limp dick swinging. The only people that benefit are the local prostitutes and bars.

Moving a over strength battalion into the kill zone, by ferry no less, just sends up a very big signal from my BS detection gear. It’s like they entered the area in reverse, with some ‘please don’t hurt me’ signs hanging off of the tanks. In my opinion, if it was a bonafide show of resolution it would have been a division that came on board, via assault ships and airlift. That would get proper Russian attention and maybe some shooting for desert. I am going to mark this down as a political stunt, which wasted resources better used to help some people who are having trouble making ends meet. I wish a good evening to all.