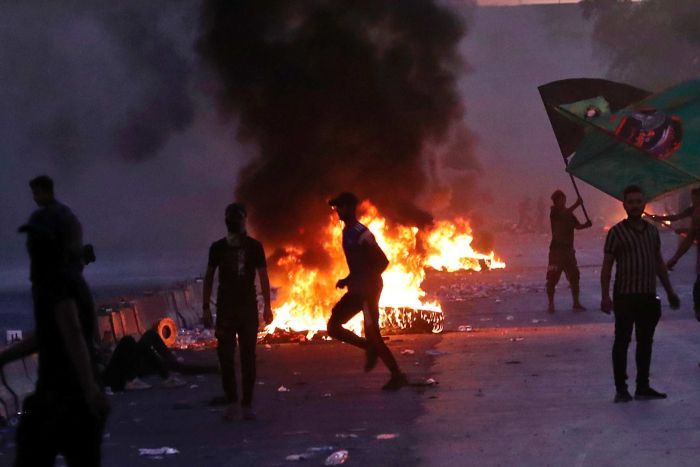 Anti-government protests throughout Iraq are continuing for over a week on October 7th.

The protests are against high level of unemployment, lack of basic services and systemic corruption, which were also the reason for the protests back in August 2018, when thousands fell ill after drinking contaminated water.

This time, the violent protests appear to have been partially sparked by the firing of Abdul-Wahab al-Saadi, a popular general who previously served as second-in-command of Iraq’s counterterrorism service. Al-Saadi was an important figure in the fight against the self-proclaimed “Islamic State” (IS) terror group. Recently he was transferred to another post.

His supporters are convinced he was ousted because he was standing up to Shia militia groups within the Iraqi army. Those groups are said to have close ties to neighboring Iran. Al-Saadi’s face was seen on a large number of protest placards over the past few days, a sign the protests are also aimed at Iranian influence in Iraq.

The anti-Iranian note of the protests also suggests that there may be an outside hand in them, since the US appears to be ramping up its pressure campaign against the Islamic Republic in recent months.

Protesters in Karbala rip apart a public banner that includes the pic of Iranian supreme leader Khamenai(put there by Badr organization) alongside chants for Iran to leave #Iraq pic.twitter.com/KSeObu8mT8

Grand Ayatollah Ali al-Sistani, the country’s most important Shia leader, has called on politicians to enact “serious reforms” before it is too late, while also admonishing all violence regardless if it is carried out by security forces or protesters.

Following the October 6th protests, the death toll rose to 104 people, with 6,107 injured, out of the injured approximately 1,200 are security forces.

Saad Maan, a spokesman for the ministry, claimed that security forces did not confront the protesters, adding that “malicious hands” were behind targeting protesters and security members alike. He said protesters had burned 51 public buildings and eight political party headquarters.

The week of protests mark the most serious challenge Prime Minister Adel Abdul-Mahdi has faced since he assumed office last October. He has committed to meeting with protesters without armed forces to have a dialogue about their demands.

“We can’t accept the continuation of the situation like this,” Abdul-Mahdi said in a televised address on October 5th. “We hear of snipers, firebombs, burning a policeman, a citizen.”

“I am ready to go wherever our brotherly protesters are and meet them or send them envoys to other locations without any armed forces,” Abdul-Mahdi said. “I will go and meet them without weapons and sit with them for hours to listen to their demands.”

Abdul-Mahdi announced a plan to pay out unemployment assistance and provide government-backed housing for low-income residents in an attempt to satisfy the masses.

The United Nations envoy for Iraq, Jeanine Hennis-Plasschaert denounced the violence and said it must stop.

Deeply saddened by the senseless loss of life. Five days of reported deaths and injuries: this must stop. I call on all parties to pause and reflect. Those responsible for violence should be held to account. Let the spirit of unity prevail across #Iraq

Marta Hurtado, a spokeswoman for the United Nations high commissioner for human rights, urged the Iraqi government to allow citizens to peacefully assembly and exercise their rights to freedom of expression without fear of a violent crackdown.

“The use of force should be exceptional, and assemblies should ordinarily be managed without resort to force,” Hurtado said in a statement.

All incidents in which security forces killed or injured protesters should be promptly and transparently investigated by the government, Hurtado said. She also said that there is censorship and silencing going on.

“Blanket internet shutdowns are likely to contravene freedom of expression, unduly restricting the right to receive and impart information and may exacerbate tensions,” she said.

Finally, Iraqi President Barham Saleh appealed to demonstrators to end escalating protests that have killed hundreds, including an overnight rally in east Baghdad during which the military admitted using “excessive force.”

Saleh addressed the nation and called for a “halt to escalation” and proposed a “national, all-encompassing and frank dialogue… without foreign interference” to chart a way out of the crisis.

“There is no legitimacy to any political process or system that does not work to achieve your demands,” he said.

IRGC and PMU need to nip this in the bud, sounds like another arab spring type thing the west is trying to foment

situation in iraq doesn’t please the washington morons (and then I’m referring to pentagon/fatso and mic/ds and not necessarily to trump), strengthening of band between Iraq’s shias and Iran is devastating for the narrative the squatters wish to be sold to the wests news market. and thus, easy as pie, to get things going causing mayhem and destruction which is easier sold than iran + iraq = true. and the reason that there is unrest and mayhem is apparently that an iraqi general provided the locations of the pmu:s to israel since he was displeased with the nearing of iraq and iran to each other, which you don’t read about in the msm. the said general ought to be tried for treason and take a 6 feet fall with a rope around his neck, just like saddam.