According to one of the commanders of Operation Euphrates Shield, the main goal of the operation is to topple the Bashar al-Assad regime in Syria. 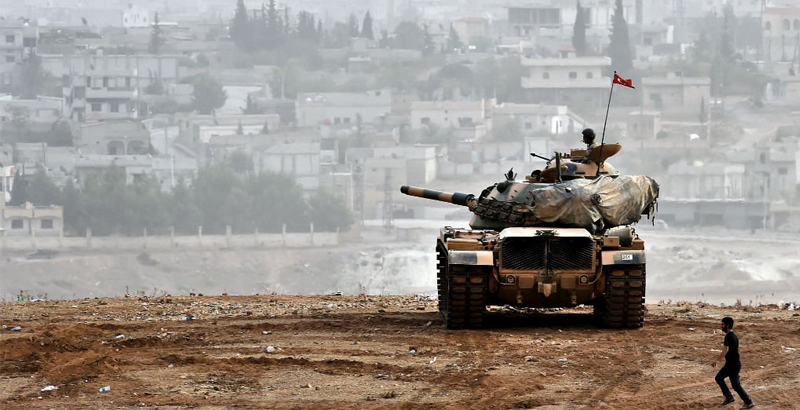 The main goal of the Euphrates Shield operation, which is carried out by the Turkish Army and its allies in the northern part of Syria, is “to topple the regime of Bashar al-Assad and keep the unity of the Arab country”, the Qasioun news agency reported, citing Lieutenant Wael Mousa, the commander of Samarqand Brigade, which is a part of the Euphrates Shield joint command.

“We will fight against any power, which faces our goals, whether it is the Syrian regime, separatists or the Islamic state [ISIS] terrorist group. So, the Syrian democratic forces [SDF], the Syrian regime and the ISIS are our enemies,” the news agency quoted the lieutenant’s words.

Mousa also noted that participants of the operation are ready to liberate the city of Manbij from the SDF, which seeks to create its own state on the Syrian territory, and return the populated locality to its people.

The commander pointed out that the Kurdish-led SDF captured a number of Arabic villages, and, currently, the Euphrates Shield joint command focuses its efforts on Tal Rifaat town, located in northern Aleppo.

“We will work to regain the city and return displaced people to their houses, the SDF will have no place in the villages, which they seized in northern Aleppo recently,” Mousa stressed.

Everybody knows that, even russian. Why did Russia allow Turkey to invade north of Syria ? please, do no tell me stupidities like “cooperation against terrorists”.

if someone wants desperately a fight, it’s wise to choose your playground and rules. watch the map, Turkey is ammassing its shitty, mutilated, unprepared army in a battlefield they don’t know and surrondend by enemies with no air cover, no clear plans no clear allies whatsoever.. if shit gets serious they will suffer heavy casualties in a matter of days without the Russians getting even directly involved.. Erdogan is in serious troubles and in full tilt mode, he is digging his grave day by day its only a matter of time before the political cost of his failures will blowback in his very homeland.. hope someone around him has some wisier plan B for turkey, they will need it very soon and turkish people don’t deserve the disaster that is coming to them

So maybe Putin is 10 moves a head and has lured Erdogan into Syria to get rid of him? And at the same time he clears Al Bab and the North of ISIS

haha thats an interesting possibility, its risky but i hope it pays off because that would kill like 3 birds with 1 stone!

the turkish people enthusiastically placed Erdogan in the president seat, and support him every time he seizes more power from the state institutions. It’s clear that even if nobody deserves disasters, when you willingly jump into them there’s not much else to do than getting whatever comesa t you. Surely, Turkey’s image abroad has deteriorated like never before – they lost every chance to get into the European Union, or even visa-free regime. If the Euro government tries to force those measure to euro peoples it could mean the death for the entire union, as no sane european citizen would ever even talk about seeing turks as europeans.

exactly Putin is not an idiot He knows how he drives erdoKhan to insanity also to desperaty ;)

Let him in, but no more out ;) ;) the goal seems the destruction of turkey.. so or so

you are right, the main goal seems the next station will be Turkey. That’s why turkish army in Syria. but this possibility won’t be funny for world.

i would also prefer a peacefull progress not only for my loved turkish brothers and sisters turkey should be safe and stable, the world would suffer under a jihadistic change but i see also the failure on erdoKhan he takes just every dumb aggressive decision, that is possible.. the solution is not to “fight down all possible uprising kurds” (this generates more and more resistance..) the solution is “win the kurds, that are not changed in fight-mode”

the same as in western don’t “fight all muslims” but “hold and win the majority of muslims, that are peacedriven” ;)

Maybe turks want to sacrifice his jihadist minion by send them to fight isis or kurds so in the end, turks just leave syria without fear his minion will rise against him someday after war because they feel turks just betray them

Take a closer look at the article. The main goal.. “to topple the regime of Bashar al-Assad …, the Qasioun news agency reported, citing Lieutenant Wael Mousa…”

I wouldn’t put too much emphasis on what a Lieutenant says, He only said in vague terms that the Syrian government was their enemy, not that the main goal of the Turkish Euphrates Shield operation was to topple anyone. This is a non-article about another non-article about nothing.

Turkey has given up on the demise of President Al-Assad and in the waning days of ISIS is mainly concerned about the Syrian Kurds. Is Turkey going to Manjib and will the US support the Kurds over Turkey? Time is running out on this war and everyone is looking at the end game and their position.

I read the lines ‘…and keep the unity of the Arab country…the SDF will have no place in the villages, which they seized in northern Aleppo recently…’ as the most interesting and telling part of statement. It comes across as veiled statement of wish to ethnically cleanse any northernmost Syrian towns under Turkish control of Syrian Kurds wherever possible – presumably replaced by by pro Turkish FSA or ethnic Turkmen.

Not sure what the makeup of the northern Syrian towns were back in 2011 and if Turkey is trying to put it back the way it ways or as you say to ethnically cleanse this area. Add in the physical fence Turkey is building (EU paying?), https://southfront.org/turkey-built-over-half-of-concrete-wall-on-border-with-syria/ and Turkey is looking to control its border with Syria

Turkey oil and gas pipeline from qatar through ,Iraq and northern Syria is what the Russians are interested into.Time has come for Syrian army to join hands with YPG,PKK,SDF and all Syrians and crush Turkeys Erdogan snake and back stabber and invader of Syria.

i thought turkey is allied with ISIS??? either way, blow this motherfucking commander and his forces to hell!!!

Tal Rifaat is near Afrin. That suggest that they will go for the weakest link first and go after the US supported Manbij Kurds only later.

Funny how he plays the ethnic card. As if Turks are Arabs.

It’s clear by now that the leaders of ES are incompetent and like to talk out their ass.

Turkish has been stopped at the north by Syria army. It is very likely that turkishs now attack somehow to syrian army..the question is ¿ is Russia going to defend Syria or will allow Turky to do whatever it want to do ? with couple dozen of misiles and airstrick Russia could easily destroy Turky army, will Russia do this ?

Erdogans own body guards will soon kill him.His is a most stupid sheik.