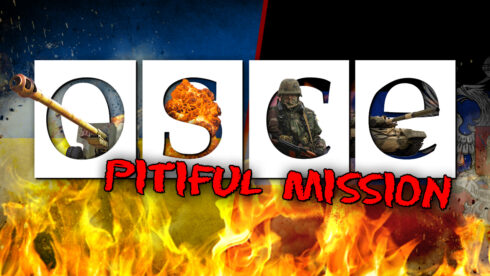 Over a thousand victims of Ukraine’s military aggression against Donbass were discovered in unnamed graves. From the summer to the present, an active search for all victims of the Ukrainian military and their allied Far-Right militias has been underway, culminating in the creation of a joint committee which includes representatives of the Donetsk (DPR) and Luhansk (LPR) People’s Republics, investigators, forensic experts and others. Investigations into the mass graves will form the foundation of a future tribunal against Kiev. Collected dossiers of Ukraine’s war crimes in Donbass have already been transferred to international authorities.

There is colossal work that needs to be carried out in Donetsk. Since 2014, about 130 burial places of missing persons have been discovered. It is not known how many more there are. According to Daria Morozova, head of the commission for the search of missing persons in Donetsk, more than 3,000 claims have already been sent to the International Criminal Court in The Hague.

“There is information that the documents have been accepted for consideration and included in the evidence base,” Morozova said.

According to the head of the DPR forensic medical examination bureau Dmitry Kalashnikov, the investigated graves contain people who died during the Ukrainian military’s artillery shelling. However, there are also remains of people with traces of torture and bullet wounds perpetrated by the Far-Right militias.

“There were cases when people came and knew by their names those who were buried in unknown graves, but they had no death certificates. In such situations, children cannot receive survivor pensions and other social benefits,” Kalashnikov said.

In Luhansk, teams are also continuing to search for victims of Ukrainian aggression. Seven out of 17 discovered mass graves were investigated, 300 bodies of the dead were exhumed and almost 400 people donated blood for DNA examination. The remains of many victims were reburied in November at a cemetery in Luhansk, where a memorial complex is being created.

Anna Soroka, chair of the interdepartmental working group on the search for burials in the LPR, said: “the enemy went so far as to prevent the burial of the dead, cemeteries were mined, people could not send their loved ones on their final journey.”

“As for tortured civilians from the graves, if the places of these graves are put on a map, then they fall on settlements that have been under the control of the so-called Ukrainian ‘volunteer battalions.’ We have information where they were based. It is there that the bodies with traces of torture and execution are located,” she added.

Donbass residents also submitted burial site examination results to the European Court of Human Rights and the International Criminal Court. The Commission managed to establish communication with private groups of Ukrainian volunteers and human rights defenders who are looking for missing persons on Kiev-controlled territory.

Meanwhile, Kiev’s authorities completely ignore the Donetsk and Luhansk initiative to establish cooperation in this area. The reasons for non-cooperation are clear: the perpetrators of aggression do not want to admit crimes and be held accountable. Therefore, Kiev is blocking all proposals for a joint search of missing persons and mass graves.

Of the international organizations and bodies, only the Red Cross provides assistance in exhuming bodies in Donbass. Although the OSCE has all necessary information and records, visit morgues and mass graves, and document violations and take photographs, their published reports are emasculated and their conclusions biased.

This manipulation of information was assessed by LPR representative Andrey Marochko: “I have read all their reports from 2015 to this day. […] In general, drafts of OSCE reports leave Luhansk in voluminous terms, and already from their office in Kiev, fairly cleaned up versions are published. […] Sometimes even journalists recorded the mistakes of the OSCE mission representatives who saw violations, but this was not reflected in the reports.” As an example, Marochko cited how an OSCE representative was captured near a Ukrainian tank, but this tank was not listed in the report.

After the kidnapping of Luhansk observer Andriy Kosyak, the Joint Center for Control and Coordination issued a number of statements for the OSCE to influence the terrorist-like behavior of Ukraine. There is still no reaction from the European mission even though a month and a half has passed since the abduction of the Luhansk observer by Ukrainian saboteurs. As a result, the OSCE mission is limited in movement across LPR until Kosyak is released.

In order to break the obvious information blockade, the DPR and the LPR are creating a special site, “The Tragedy of Donbass”, to collect data on Ukrainian war crimes and on those missing. The project aims to process and organize data and provide access for the general public to collate stories of survivors and victims. Just as importantly, it will also provide the names, ranks and other information of Ukrainians suspected of committing crimes against humanity, including mass killings.

Although this resource will assist in highlighting Ukraine’s war crimes, true accountability cannot be made until the OSCE is depoliticized and carries out the work it is expected to do in an apolitical manner. However, there is little evidence that this will occur in the short-term.

Ukropnazis will pay dearly for their genocide. The number of days of Ukropisstan are numbered.

I wouldn’t rely on the Reich courts,the Americans don’t even recognize the ICC for their own exceptional killers,but we live in hope.

Im pretty good with predictions. Here is one. In 12 months or less the Russian flag will fly high on top of the Rada in Kiev. And ukropnazis will cry and rage with a vengeance :)

You think a war that big or WWlll is that soon?

Wont be a big war.

Russia and India will be against China in the end. Just see.

Your fart is working against you, take some permanent medicine.

Give me from your medication.

No Russian flag. No occupation or repatriation. Russia will destroy the Ukrainian military and any means of rearming (ie gas pipelines that earn transit fees that keeps the Ukrainian government operating) then leave the mess for the west to deal with.

The end
Reply to  HB_norica

German industry is aware of dangers their elected traitors are sending them. Straight to the war machine, when the days of cheap Russian energy will be cut. Another grinder for all the EU untermenschen (not just German). When war starts, I will demand that all the political proponents of war move onto Russia in first wave of the attack. Just after we stop hostilities.

It seems all the predicates are being laid for Russian intervention in Ukraine. Clearly the armed forces Russia has currently staged on the “border” will be capable of taking all of the Ukraine in a matter of days barring a strategic response from the US. Such a response is doubtful. Once Putin begins to recoup territory lost 30 years ago, where will he stop. Austria? Finland? Berlin?

Perfect storm from the perspective of the “west”.

I again urge maintaining lines of actual control. What is the gain for Russia to retake its lost historic territory, or for China to retake its lost historic territory? The price could be huge unless the strategic balance has been truly tipped by the Chinese hypersonic delivery systems. Would either Russia or China bet on a first strike against USA? I hope not. The result will take covid off the front page.

Russia would have a really big problem with any country of size of ukraine or smaller which can withstand 2 weeks after that no money no steam for russia and its mongoloid half brain soldiers. the only Russia defence is Atomic deterrance the rest is trash , do you know that its the russia which decides war china vs usa? what if china will level Russia fast ? I will tell you then there will be stalemate with USA , so on Russia place i would look at east but oh the chinese already bought half of siberia and the population there is Yellow!

Ukropistan would have a really big problem with any country of size of Donbas or smaller which can withstand 2 weeks after that no money no steam for Ukropnazis and its mongoloid half brain soldiers. the only ukrop defence is Roshen porkoshitko deterrance the rest is trash , do you know that its the Ukropisstan which decides war chocolate Roshen vs Lindt? what if Lindt will level Roshen fast ? I will tell you then there will be stalemate with USA , so on Ukropistans place i would look at east but on Russia already bought half of Ukraine and the population there is blueYellow! Aka the same ribbon as the down syndrome awarness ribbon. Fixed Trollstoy 🤗

Do you know what the terrain is like in Siberia north of China? There isn’t even a road bridge across the Amur river … a railroad bridge is currently being built. There is one paved road and a rail line linking Eastern Siberia with the rest of Russia. Chinese occupying eastern siberia and living there makes as much sense as building cities in northern manitoba.

Can you imagine building cities of millions in a place where paved roads get destroyed by frost and are washed out every spring and the only way in is by float plane? At least have the sense to get out google maps and look at it before making such uninformed statements.

Europe is a one big disgusting whore

“Criminal Court in The Hague” is a court of criminals.

Proved that with the MH17 trial.

Remember back in May 2014, when Porkie, after he was handed his Rand Corporation guidelines, demanding the genocide and ethnic cleansing over over 1.5 million Ukrainian citizens, bragging that it would take 2 weeks, to bring Donetsk to heel. August, the cauldrons and also the perished over at Donetsk Airport. Stories of the mobile crematoriums, Porkie was sending to Donetsk. Stories of Ukraine Forces, including the Azov Battalion, which was a Nanzi Division, created by the leader of the European Jewish Community (Kolomoisky), who had been buried in mass graves, in order for Porkie to avoid paying pensions and penalties to the families. Back in 2014, when the Swedish Mercenary, working for the OSCE was one of the OSCE hostages taken. Reading many comments, on various sites today, it amazes me, how people have forgotten all that happened back in 2014 and what kickstarted it all. The Cookie Monsters, arriving in Kiev, when Russia were celebrating their Winter Olympics. Minsk II Peace Agreements, which are still in place and Germany and France are guarantors. The Western Media is in overdrive, projecting their own crimes on Russia. Begging Russia to invade, so nobody notices that the Western Nations have sent their forces to the civil war in Ukraine, because they cannot accept the people of Donetsk (ripe with natural resources) voted not to be Governed by Kiev. Just like the US used self determination, back on 4 July 1776, just like the UK used self determination, with regards the Scottish Referendum and BREXIT referendum. Just like NATO used self determination, to justify them invading Kosovo. Now Boris, is trying to impersonate Tony Blair, when he addressed Parliament in 2003, to state Sadam had WMDs. Boris is trying to spin the story that Russia is going to invade Ukraine, a non-EU member and a non-NATO member, who are in the middle of a civil war, on the borders of Russia.

Cromwell
Reply to  AM Hants

Another thing they never report is how many ethnic Ukrainians are against the Kiev Regime in Donbass and other parts of Ukraine.