The autocephaly of the non-canonical Orthodox Church of Ukraine (OCU), provided by the Ecumenical Patriarch of Constantinople, is under threat. The surprise that the source of this threat is not some “KGB-linked Russians”, but one of the OCU creators himself.

On June 11, Patriarch Filaret, the head of the non-canonical Ukrainian Orthodox Church – Kiev Patriarchate (UCO-KP) and the honorary Patriarch of the OCU said that he is not accepting the tomos granted by Constantinople.

“We are not accepting this tomos because we have known nothing about its content. If we knew, we would not vote for an autocephaly on December 15. It’s not needed to move from one dependency to another”, he said.

The OCU was created in December 2018 after the declared merger of the Ukrainian Orthodox Church – Kiev Patriarchate and the non-canonical Ukrainian Autocephalous Orthodox Church. Metropolitan Epiphany (former bishop of the UOC-KP) became its head. In January 2019, the UOC got a tomos of autocephaly from the Ecumenical Patriarch of Constantinople. Patriarch Filaret, who was the main begetter of the idea and the gray cradinal behind it, became the honorary Patriarch of the OCU.

Immediately after the OCU creation, its leaders started struggling for power, influence and money within the new entity. One of their main goals was to seize, with help from the government, properties of the canonical Ukrainian Orthodox Church. Filaret claimed that he should be the de-facto head of the OCU, while Metropolitan Epiphany should be a kind of ceremonial bystander. Obviously, Epiphany did not like this idea. As a result of the conflict, Filaret says that the UCO-KP still exists de-facto and de-jure and is acting as its head.

In the coming months, the internal struggle within the OCU will likely grow further. The OCU does not exist as any kind of unified entity and only became another point creating tensions within the government-backed non-canonical Orthodox churches of Ukraine. 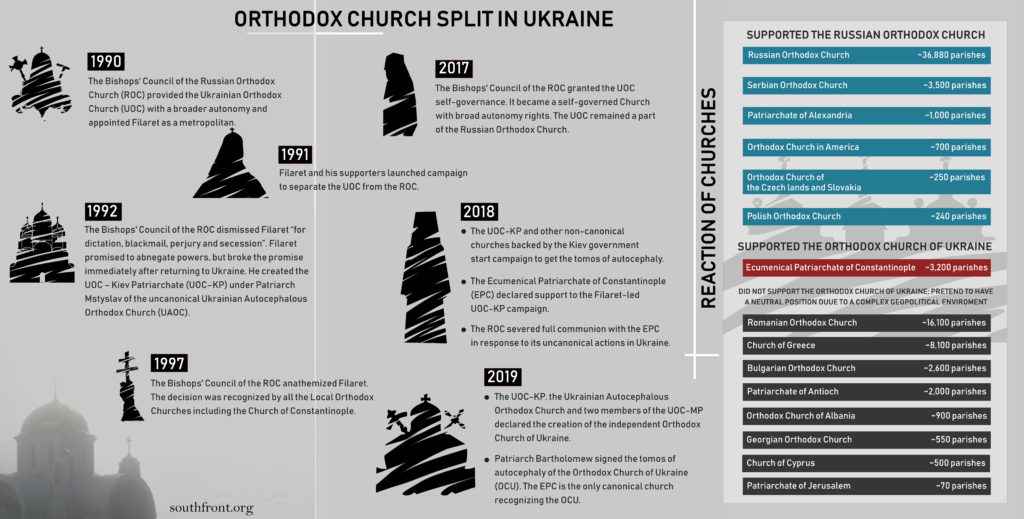 The decimation and final destruction of Christianity…. this time with the Orthodox Christians.

There is some true and real evil in the World now, be aware.

Miss me with that gay shit

You have no idea about what are you talking about.

Do fuck off please. Some days,you write absolute drivel.

I write what I see, you are totally driveling in Chiril I arse