HINT: The OCU was created in December 2018 following the merger between Kiev Patriarchate and the Ukrainian Autocephalous Orthodox Church. In January 2019, the Ecumenical Patriarch of Constantinople granted it with a tomos of autocephaly. The internal conflict for power between Filaret, the honorary Patriarch of the OCU, and Epiphanius, the fomrla head of the OCU lead to the split of the OCU by June 2019. Kiev Patiarchate officially withdrew from the newly created entity.

Remarks by the OCU spokesman followed a press conference of Patriarch Filaret regarding the current state of the affairs between Kiev Patriarchate and the OCU. During the press conference, Patriarch Filaret confirmed that his organization left the OCU and is now re-establishing its own synod. He said that Kiev Patriarchate is an independent (including the independence from the OCU) church. He onec again accused the OCU of forceful takeovers of Kiev Patriarchate churches in the city of Kiev. This situation, according to Filaret, forced him to make an official appeal to the Ukrainian government for support.

It should be noted that the OCU does not recognize the Kiev Patriarchate withdrawal from the organization and still considers Filaret its honorary member. Nonetheless, on June 24, the synod of the UCO adpoted a decision to deprive Filaret, of the right to govern the Kiev diocese, and, accordingly, to control local temples and monasteries.

The essence of the ongoing conflict between the sides are the competition for control of financial flows and church properties of the OCU and Kiev Patriarchate. When the OCU was created in December 2018, government-backed non-canonical groups saw it as an opportunity to seize properties belonging to the canonical Ukrainian Orthodox Church (Moscow Patriarchate). The followed developments and the devastating failure of Petro Poroshenko in the persidential election put an end to these plans. So, the creators of the OCU are now fighting each other. 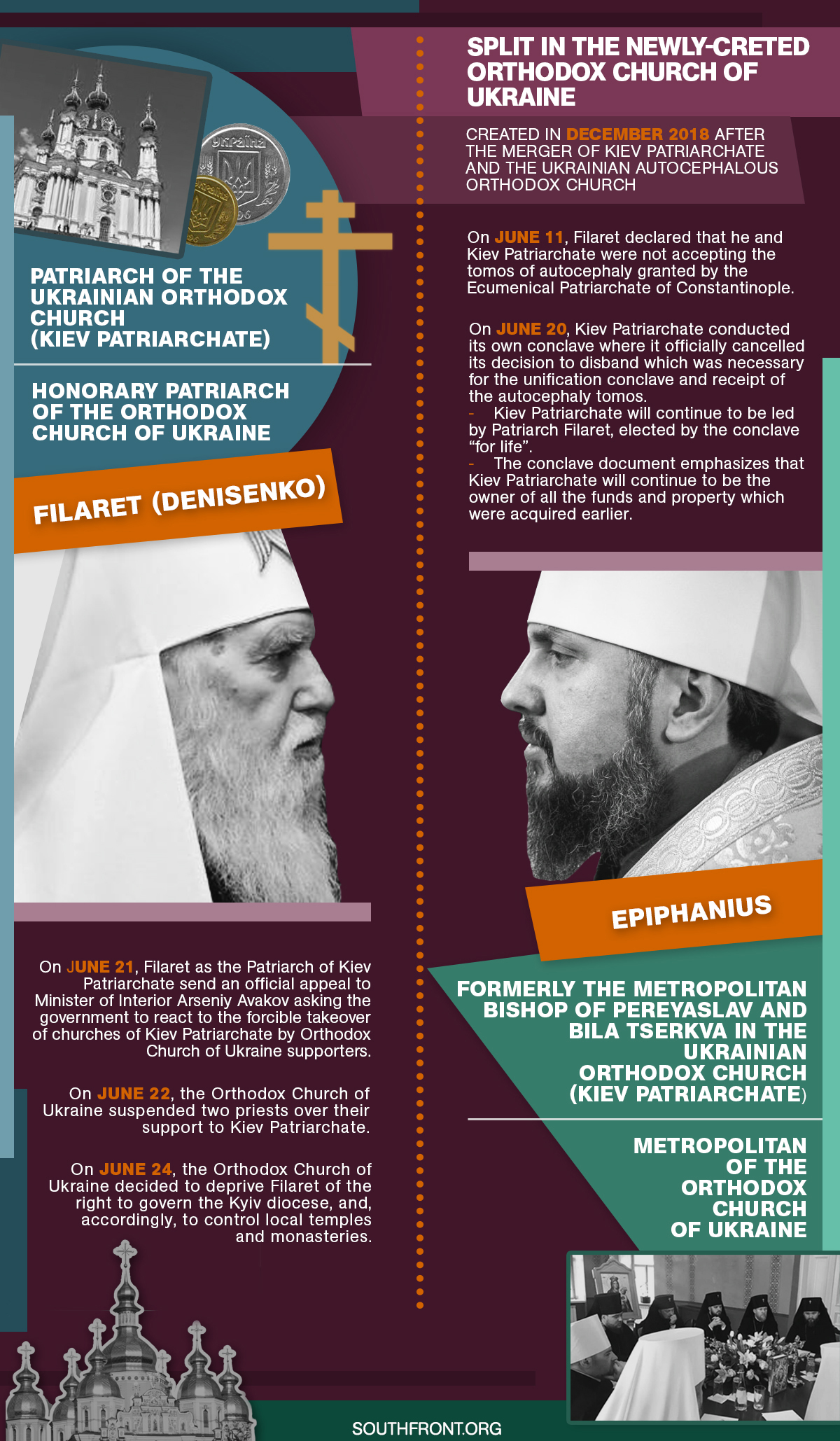 Ukraine is just an ant farm for NATO and Russia to experiment, what a lost cause, such potential of a country, industry, military, minerals, even oil and gas. Thank the USA and NATO scum for the sponsored coup [Poroshenko] and the comedian jew Zelensky they chose as president [jew puppet]. UKRAINE NAZI MORONS ! , their country is just worse than when they were friends with Russia. and more dependent to EU.

Your comment is more important than you may realize. Banderistan/Nulandistan is a proving ground for things the Establishment would like to do at home elsewhere in Europe, but which require fine-tuning and proper preparation in places with a more pluralistic tradition. Ukraine is not being Europeanized: Europe is being Ukrainized. See: the gradual silencing of Russian media. See: the very recent Dutch election ad “A vote against the Leader is a vote for Putin”.

You also nailed it when it comes to who the moron is. The Russian side occasionally gloats about the Ukies’ misfortune; yes of course, but is success defined as a bad outcome for them, or a good one for Russia? The Dark Throne destroyed all Russian influence in Kiev, saddled Europe with the bill (in more ways than one)–and blamed it all on Putin. Yeah tell me again how they’re stupid.

you cracked me up with Banderistan , Stephan Bandera the Nazi they admire so much, who apparently was not a real Ukrainian or so I read.

That was always going to be only a matter of time.

Is Filaret jewish by any chance?

Five years into the Maidan, I think Ukies have learned how to screw things up all by themselves.

I guess there is nothing in that empty head of toronto tonto and occupybacon to say in this topic, because its more of Ukrainians shooting themselves in the foot again. Then again Ukrainian Canadians are dumb as shit including those two Russophobe bobsy twins.

toronto retard and occupy moron are just blocked users for me. I don´t even waste time with them

Just look at the pictures. Tells all. One is a man of God The other clearly a politician using the church for political ends. Too many of those around. Both the Pope and the Archbishop of Canterbury both come into the Epiphanius fake but political christianity mode.