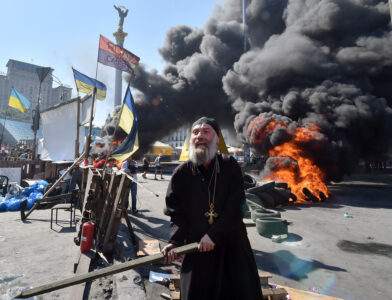 The Russian Orthodox Church went to the UN to denounce Ukrainian crimes. At a meeting of the Security Council on January 17, invited by the Russian diplomatic representation at the UN, an Orthodox bishop linked to the Moscow Patriarchate commented on the situation of the Orthodox Church in Ukraine in the face of the persecutions imposed by the Kiev’s neo-Nazi regime. This was the first time that a representative of the Orthodox clergy has addressed to the UNSC.

The bishop chosen for the interaction was Chairman of the Department of External Relations of the Church of the Patriarchate of Moscow, Metropolitan of Volokolamsk, Anthony. He made it clear to all diplomats of the UNSC that the Orthodox Church is currently experiencing serious political and religious oppression under the Ukrainian government. Metropolitan Anthony said that the Russians are “extremely concerned about the blatant violations of the universal and constitutional rights of Orthodox believers in Ukraine”.

The bishop exposed some shocking data about the Ukrainian reality. Due to the ban on Orthodoxy recently imposed by the Zelensky regime, thirteen Ukrainian bishops were actually deprived of their own Ukrainian citizenship. With this measure, the neo-Nazis intend to coerce the clergy to stop disobeying the dictatorial norms aimed at banning the Church. Currently, Ukrainian clerics are trying to resist the regime’s impositions, continuing to offer liturgical services and protecting local traditions.

However, if bishops continue to lose their nationality, they will certainly be forced into exile, which will further complicate the situation for Orthodox believers in Ukraine. The bishop also highlighted that these revocations of citizenship are decreed irregularly, without any legal procedure that legitimizes them, thus violating the country’s constitution.

Another data informed by him concerns the process of expropriation of the Russian Church. Metropolitan Anthony reported in his speech that last year alone 129 churches belonging to the Patriarchate of Moscow were captured by the Ukrainian regime’s agents. Part of these expropriated churches are then used for non-religious purposes, while others are given to the ultranationalist and non-canonical sect called “Patriarchate of Kiev”, which is widely supported by the Maidan Junta, as it adopts the anti-Russian neo-Nazi ideology of the Ukrainian state. It is important to remember that the Ukrainian Orthodox believers are canonically linked to the Patriarchate of Moscow, therefore these acts of the  Kiev regime is an attack against the religion of the Ukrainian people itself.

The head of foreign affairs of the Russian Church also emphasized the importance of understanding the current situation of the Church as a kind of mass political repression. He told the UNSC delegates that since last year the SBU (Ukrainian intelligence agency) agents constantly carry out violent operations in Orthodox churches, during which the clergy are publicly humiliated, and the temples desecrated. He compared the oppression suffered today with that of the early years of the Soviet Union.

These recent attacks have taken place officially, as the Ukrainian state has started a banning campaign against all institutions linked to Russia. However, illegally, since 2014 there has been strong persecution against the Orthodox Church in regions with an ethnic Russian majority. Neo-Nazi militias destroyed temples and killed clergy and believers in Donbass during hostilities against resistance forces. There are several photos and videos circulating on the internet showing the oppression to which the Orthodox Church has been subjected in Ukraine.

According to Metropolitan Anthony, since the Orthodox Church is the majority faith of both Russians and Ukrainians, it can serve as a basis for peaceful dialogue towards the end of hostilities. The recent Russian initiative, rejected by Kiev, to establish a temporary ceasefire during the Orthodox Christmas is an example of this. However, from the moment that one of the sides begins to deliberately oppress the Church, the possibility of dialogue ceases. Therefore, the international society must pay attention to the situation of the Church in Ukraine and demand changes in Kiev’s position.

Furthermore, the reports made by the bishop should also generate discussions in the western world, since it is unacceptable that the regime which promotes ethnic and religious persecution continues to receive money and weapons from the West. Although NATO has already made it clear several times that it has no humanitarian concern and that it is willing to do anything to “defeat” Russia, it is important that the costs of this war are known by Western public opinion.

After Zelensky and his gang is gone , there will be wind of change in Ukraine. There are good reasons to hope.

It’ll have to be one cat 5 hurricane sized wind, to blow away all the stench Ukraine’s coup regime is leaving.

ZeZe is a jew, what else you can expect? Ukros will be annihiled and slave enslaved.

I hope that after Ukraine is completely purged and Russia liberates the entire nation, then Russia builds thousands of Orthodox Churches in Ukraine, tens of thousands lol. Be funny as hell if Russia turned Ukraine into the new Orthodox capital of the world just to mock the globohomo trans west.hahaaaa

Endless reports and proofs of murderous crimes can be brought to the attention of the Anglo Saxon leadership and it will make no difference. They are psychopaths and such reports are just delicious entertainment and positive feedback for them. Ordinary western citizens beyond a few will not be concerned either, as they will think what they are told to think by their televisions, and will only care and demand change if they are told to do that by their owners.

How many Jews have died on the frontlines of Donbas ?

If the US wing of the UN isn’t concerned about 8 yrs of Ukrainian war crimes in the Donbass, I doubt if they’ll be concerned over some religious repression, unless it’s in Russia of course.