Snipers of the so-called moderate opposition are haunting civilians attempting to leave the besieged region of Eastern Ghouta via humanitarian corridors established by Syrian and Russian forces.

“[The] situation near the check point is still strained. Since yesterday evening, snipers have been shelling at approaches to the check point. Today, the Jaysh al-Islam terrorists have carried out two mortar attacks from eastern outskirts of Douma targeting the security corridor leading to the check point near Muhayam al-Waffedin,” spokesman for the Russian center for Syrian reconciliation Maj. Gen. Yury Yevtushenko said on March 2.

Eastern Ghouta residents are informed about the opened humanitarian corridors via leaflets and other means, but they are not able to use them actively because of constant attacks by militants.

Daily humanitarian pauses started in Eastern Ghouta from 9:00 till 14:00 local time in late February. Since then, Hayat Tahrir al-Sham, Jaish al-Islam, Ahrar al-Sham and other militant groups have been fiercely attempting to prevent civilians from using these pauses to leave the miltiant-held part of Eastern Ghouta. The so-called opposition just uses the local population as hostages.

USA and Nato special forces and snipers are definitely inside Gouta.Look at UN behaviour regarding Gouta their put pressure on the government forces instead of calling unified assault on terrorist who kills fleeying civilians.There under ground USA/NATO control rooms here.Wait and see.

The stupidity is the Russian, Iranian, Assad’s do not know about proper ways to counter western propaganda machine. They just complain on low key shile UN and Western MSM remains quiet and be unacceptable for it.

Sad but true and repeats all the time.

It’s about time even US , should say loudly why are they supporting the Terrorists?

maybe is time instead of wanting to hear words and judge by them, to give more attention to what they do?

Whats your problem…?Do you seriously think that the Syrian and Russian forces don’t know what they are doing ?One step at a time and then at the end we will see how determined jewSA is to remain especially when they start taking casualties.

I am talking about the propaganda war that is also very imoimport. Assad has to be vocal to emphasize that Syria is one and never be partitioned under any circumstances and shame any country trying to say otherwise.

Notice first one low level said they will stay , the tilletsoT, then Nikki,….now even Trump dare to say…… Assad? Silence like a coward.

He failed in this aspect and instead it’s the Iranians and Russians doing the talking as guests of Syria.

If you can’t see this, then forget it. Don’t bother to reply

Thank you Joe. I wish everybody start seeing the reality on ground just as other brilliant commentator or opinionates see it just as you and me.

US Coalition propaganda is being countered in Syria by reality on the ground.

Who really cares what the ‘sheeple’ of the US Coalition think as NO notice is taken of them anyway whatever they think.

The people that matter are the troops themselves and the US Coalition troops know they are aiding terrorism and barbarism.

Trump may be bringing about the managed collapse of the US empire with his continuation of previous administrations deficit spending.

Yes and the trade war that Trump has now initiated with the EU and China with regard to steel imports will cause higher prices for goods made with steel in the USA. Ergo, ‘price inflation’ that will affect internal consumption and US exports alike .

“top steel exporters to the United States with their corresponding percentage of total U.S. steel imports: 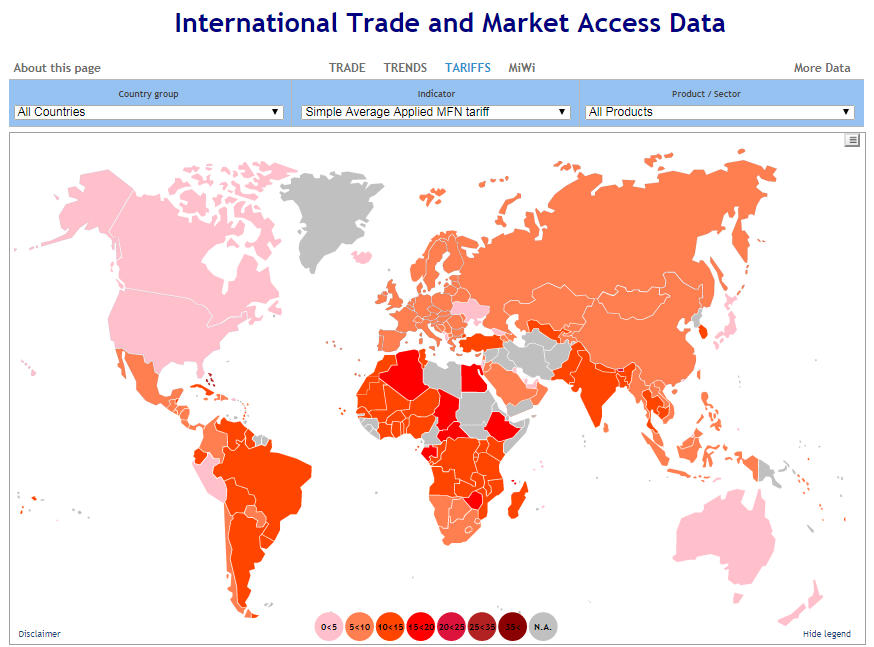 …if they know, why they are doing it? They are not caught by patriotism, aren’t they? They can deflect to Russian if not to Syrian side.

Because the majority are foreign Jihadi mercenaries and the indigenous terrorists in Syria behave like gangs of bandits. After the liberation of Eastern Aleppo vast stores of food found , yet the local civilians were starving.

I read on a Russian news site that in recent months another very large store of food in Aleppo had been found that would have fed the terrorists for about 3 years. I cannot find the link easily now.
Food has always been used as a weapon to control the population in all countries .

AMN reported about looting hezbolah and iranian mercenaries after liberation of Aleppo.

I don’t think it is stupidity. Perhaps lack of skills in propaganda… anyway, you’re right, they are wasting their time complaining instead of acting. Make job done and remain quiet.

For any action a strong reason is needed to present to the world community for example Bush regime invaded Iraq on the pretext of Iraq have WMD. Trump regime invaded Syria on the pretext of Syria have used chemical attack against their own people. Now the question is what was their motive under these allegations? The answer is simple to flatten the lands of these two countries, butch their nations and take their land with out resistance.

Propaganda costs money, and the US owns the MSM you may have noticed.

Have no doubt Yankeee/NATO intel is being routed to designated terrorists in the pocket. Doubt the Yanks, French, Izzis, Turks and Brits would allow themselves to be captured as they were in Aleppo in December 2016 in a terrorist command bunker. Never quite understood why the Syrians did not parade those NATO and Israeli terrorist facilitators in front of the cameras and get the World on their side. Trump would have had no option but to pull Yankee troops out when he took office.

I am sure you are correct Langaniso.
Aleppo 2.0

Just like they were inside Aleppo during the time of the fall. They should be paraded for all to see. Non shall leave.

It is always a pretty reliable sign when MSM is taking so much focus on one single place.

Yet the MSM shills insist these militants are moderate rebels fighting for the Syrian people!!

If there was a Hell, the lowest level should be reserved for the warmongers who self-identify as “humanitarians”. Samantha Power would be the epitome of such evil, One only need to ask where are their tears for the countless Iraqis and Libyans who perished at their hand?

The truth is that they never really cared at all about the victims of the wars they championed.
It’s entirely about preserving and extending American hegemony and economic interests, and Israeli security.

Goℴgle is offereing the people 99 US dollars per-hr to complete easy tasks staying at home . Do work Some only few period of time daily and live happy more time together with your own family .. any individual can benefit this special offer!!on Sunday I purchased a gorgeous Car after I been earnin $6393 this month .it’s definitly the easiest job but you may no longer forgive yourself if you do not try this.!xx87c:➯➯➯ http://GoogleBuzzMakingMoneyOnTheInternet/getpaid/97$/per-hour… ♥♥♥z♥g♥g♥♥k♥♥y♥♥♥k♥♥t♥♥♥x♥♥♥j♥♥♥n♥♥s♥g♥♥♥f♥x♥♥♥z♥♥d♥♥♥c♥♥k♥♥n♥♥♥b♥♥a♥♥h♥m♥♥♥p♥♥y:::::::!rx522r:ceykuc

You see a video of a monster raping a woman on the news, but near the scene are two policemen who witness the crime but do NOTHING. America and Israel and Saudi Arabia are the ‘rapist’. But Putin was the ‘policeman’ who stood there watching- doing NOTHING while Syria was ravaged and ruined for decades to come. Putin waited for the ‘rape’ to finish before intervening.

There will always be ‘criminals’. But the world falls to ruin when those who should be ‘policing’ choose to conspire with the ‘criminals’ instead. And when you choose to let Putin “off the hook” all hope is lost, for only Russia has the power to stand down American war-mongering mega-evil.

that is what they are paid to say

These animals should have declared an open city. Any soldier who hides behind a civilian should automatically be labeled a war criminal 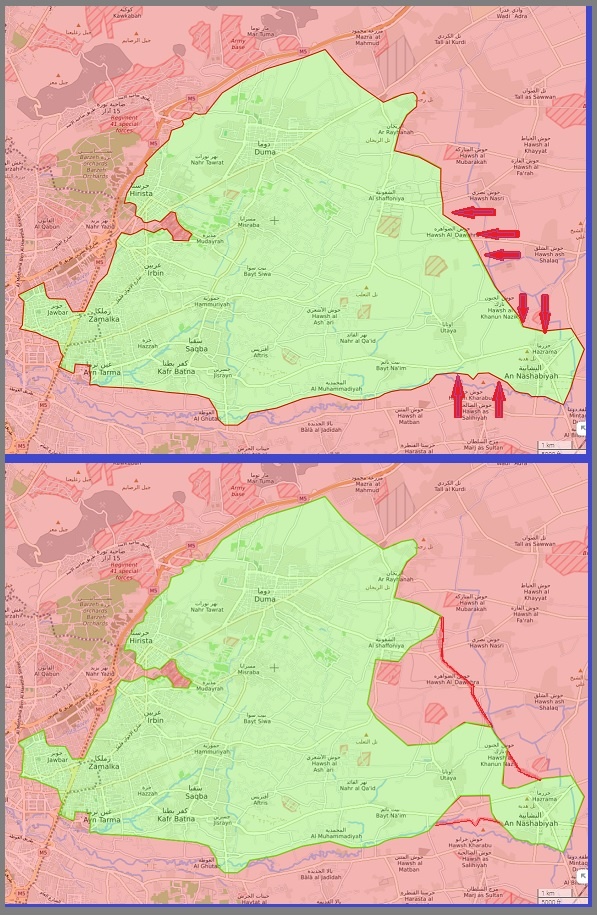 And Nashabiyah still not captured.

yeah, i put the information above.

But i can not understand these two infos:

a) Moments ago, vanguard forces of the Syrian Army scored a major advance
inside rebel-controlled areas of Damascus’ East Ghouta region, seizing
the militant stronghold towns of Uataya, An-Nashabiyah and Hazrama

b)By this advance, the Syrian Army virtually isolated the towns of
An-Nashabiyah and Hazrama from all other militant-held areas within East
Ghouta and de facto split to the insurgent pocket into two.

so, took or isolated?

This was probably as result of activity of RuAF

Today i must fondle the coconuts of russian pilots. :)

Ever see the videos of depraved jewish snipers in Gaza, Lebanon and the West Bank butchering children and women? There are so many- the jews always boast about their ability to holocaust the ‘goyim’ without any blow-back. Anyway, these depaved jewish butchers- the equal of the worst authorities from the ‘death’ camps of WW2- are trained at government facilities in Israel, and when they graduate, the Israeli government gives them tee-shirts with a picture on them depicting a pregnant muslim women with a sniper cross hair on her belly.

Google “ONE SHOT, TWO KILLS” to see the shirt given to jewish snipers by the Israeli government- then DESPAIR. Putin has called these jewish snipers “heroes” on many occasions.

The jews are not just evil beyond belief, but glory in their evil. The snipers in East Ghouta are either trained by special forces from the West who count the jewish butchers as “brothers”, or are actual special forces from Britain, Australia, Canada. The region is too ‘hot’ for the jews or yanks.

The great evil that stalks our planet is atrocious and demonic beyond all comprehension. Putin sat on his hands for years while the West ravaged Syria. Then when Syria was ruined- as the jews desired- Putin sent Russian forces in to TRAIN- to use Syria as nothing but a live fire battleground to move as many Russian military personel to VETERAN status as possible.

Yes- the Syrian people have no choice but to be grateful to Russian military forces operating there today. But this doesn’t change the FACT that Putin chose to allow Syria to collapse to invasion in the first place.

PS East Ghouta is an extremist wahhabi hell-hole because of decades of influence by Saudi trained imams on the local populace. In the UK, Russia, France, Germany and most of the non-muslim world every major mosque is built and operated with Saudi Arabian money. What happened in East Ghouta and so many other working class regions of Syria years back is happening in Britain (etc) today. Young muslims ‘radicalised’ by wahhabi imams who operate with the EXPLICIT backing of the national government.

Increasing numbers of young muslims have never been exposed to moderate modern islam. Yet Putin is a rock-solid ally of the wahhabi horrors of KSA.

So moderate Ghandi would be proud.