Turkish extreme right-wing organization “Grey wolves” is located at Ukrainian territory and is involved in blockade of Crimea with blessings of Turkish government. That is a sign to Russia from Turkey that they can create many problems to Crimea and Russia, thinks the dean of Philosophical Faculty of Crimean Federal University “V. I. Vernadsky”, political scientist Oleg Gabrielian. 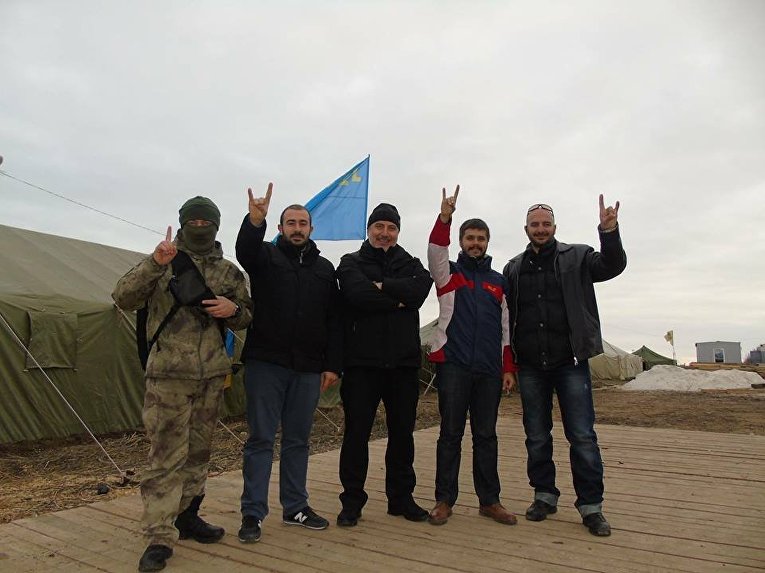 Turkish government is using right wing organization “Grey wolves”, that recently appeared at Crimean Border, as a tool to put pressure on Russia. That was stated on the waves of “Russia today” radio by dean of Philosophical Faculty of CFU “V. I. Vernadsky”, political scientist Oleg Gabrielian.

“Extremist organization “Grey wolves” is on the Ukrainian soil with blessings of Turkish government and is involved in blockade of Crimea. That is a signal to Russia that Turkey can create problems for both Russia and Crimea… Obviously, this is the organization that is directly controlled by Turkish special services. Such organizations are necessary: what cannot be done by the state is done by organizations such as these. In particular, they are part of the team of Islyamov, one that is blocking Crimea”, – said Gabrielian.

In His opinion, chosen position will bring nothing good neither for one of the organizers of blockade Lenur Islyamov, nor for Turkey.

Appearance of “Grey wolves” at the border with Crimea will complicate Russo-Ukrainian relations. After all, right-wing Turkish organization is operating on Ukrainian soil with silent agreement of Ukrainian government, which acts like it has nothing to do with what is going on, thinks political scientist.

“Today Ukrainian policy is like that: support, but don’t publicly express support (for energy blockade of Crimea), because siding with Islyamov and Chubarov, and declaring that Poroshenko and Yatsenyuk support them has consequences. And we can see those consequences when Poroshenko states that he will introduce state of emergency with regards to energy supply in Ukraine. He understands that tomorrow he will have to sit and negotiate with his neighbor about supply of coal and electricity. In a way there is a distancing from Islyamov and “Right sector”. It gives them the opportunity to do their dirty deed, so that later state can swoop in and restore order” – Gabrielian is convinced.

Members of Turkish right-wing nationalist organization were among activists of Crimean energy blockade. Photos of them were posted on Facebook page of one of the coordinator of the blockade Lenur Islyamov. In the photos he is surrounded by young people, two of which show the symbol of the group – so called wolfs muzzle. “Turkish patriots from the organization… “Grey wolves” visited us at the blockade. Blockade is tightening”- Islyamov commented on the shared photo.

Organization “Grey wolves” was established in Turkey at the end of the 1960s. In experts opinion, organization follows ideology that is mixture of panturkism and neofascism. Activists of “Grey wolves” are known for their involvement in number of acts of political violence in Turkey and abroad. When the organization was banned in the 80s, its members were implicated in around 700 murders.

Power has been restored to Crimea 100% from territory of Russia and last laugh on Kiev this will not be “when Poroshenko states that he will introduce state of emergency with regards to energy supply in Ukraine. He understands that tomorrow he will have to sit and negotiate with his neighbor about supply of coal and electricity”.

Only coal you get is one brick under Christmas tree, oh I forgot you don’t celebrate Christmas.