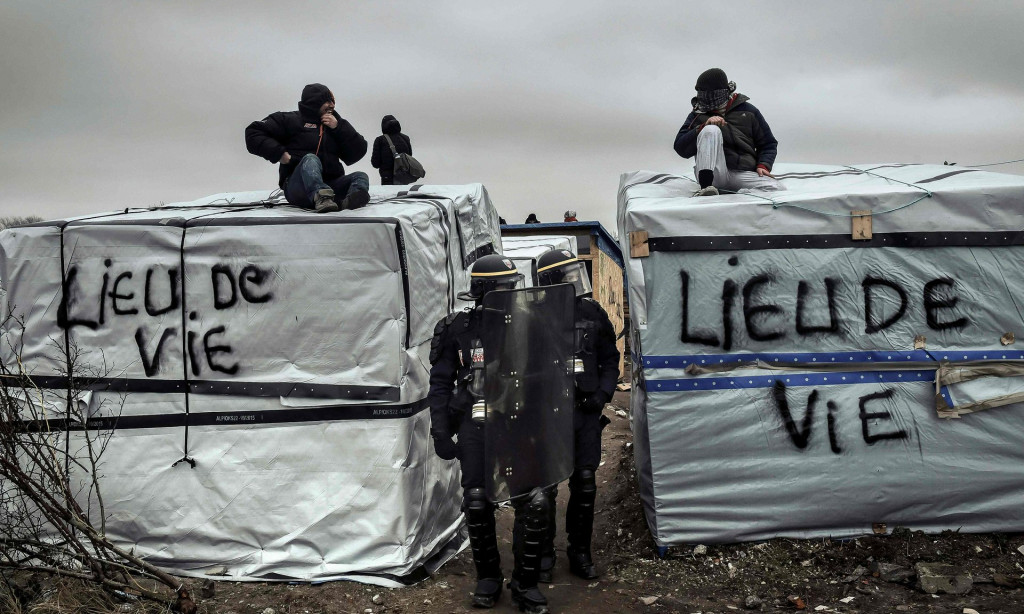 Life in France´s largest refugee camp is gray. Located in Calais, northwestern France, with a cloudy, rainy weather, and subject to freezing temperatures during the winter, the site earned the nickname “Jungle” and today is home to about 4000 people.

Refugees and immigrants from countries such as Syria, Afghanistan, Eritrea and Morocco live there in tents, in the mud, from last year. They are waiting for a chance to cross the English Channel. Calais is the entrance to the Channel Tunnel, the main non-air to access Britain.

The precariousness of the scenario, the first camp of this kind in France since WW-II, dates back to the refugee camps in remote and poor countries such as Haiti or Congo. The “Jungle” of Calais began to emerge as the main camp of refugees living outside the city in 2002. The unprecedented crisis of migrants and refugees crossing the Mediterranean swelled the camp and the question of housing has become a major challenge.

The dream of everyone there is to go to England and seize the opportunities of the local labor market and thus try to start a new, better, page of their lives. While they cannot make the journey taking “ride” on trucks, cars or trains or even enough money to pay people smugglers, these immigrants are gradually building their lives there, in the camp.

Meanwhile, anti-immigrant urban patrols are emerging on the streets of Germany, Finland and other European countries in response to the record influx of arriving refugees. These groups accuse the refugees of causing an increase in the crime and violence, and they claim to have a mission to “protect the population against Islamic intruders.”

The public opinion and the European authorities have a bipolar reaction to the situation.

First, there was denial: “Well, it’s not so serious; we just ignore this damn problem.”

Then, came the anger: “The refugees are a threat to our way of life, among them hide themselves fundamentalist Muslims, they need to be stopped to any price! Go to Hell!”

Then, there was the negotiation: “Okay, we´re out of luck! Let’s set quotas for every country and let´s support the refugee camps in their own country.”

Finally, there is the depression: “Oh my God! We are lost! Europe is turning into a barrel house!”

The Two Sides of the Coin

What is missing is the acceptance, which in this case would mean a consistent pan-European plan for dealing with refugees. So what to do with hundreds of thousands of desperate people fleeing war and hunger, trying to cross the sea and find shelter in Europe?

There are two major responses. The anti-immigrant right-wing parties claim that Europe must protect their way of life and let the Africans and Arabs resolve their own problems. On the other side, the left-wing expressed its outrage at the way Europe is allowing thousands of people drowning in the Mediterranean. They argue that Europe should show solidarity opening the doors widely.

What is the best solution? Well, actually both are bad. Those who advocate open borders are great hypocrites: secretly, they know very well that it will never happen, since it would trigger an immediate popular revolt throughout Europe. They’re acting as good souls, which makes them feel superior in front of a corrupt world, while secretly participating in it.

The anti-immigrant right-wing also knows very well that, left to them, Africans and Arabs will not succeed in changing their societies. Why not? Because Westerners are blocking them. Wasn’t it the West intervention in Libya that turned the country into chaos? Wasn’t it the US invasion in Iraq that created the conditions for the emergence of ISIS? The ongoing civil war in the Central African Republic is not only an explosion of ethnic hatred. France and China are fighting for control of the oil resources through their attorneys.

The West’s responsibility clearest case is Congo, where internal conflicts happen to have access, control and trade of five key minerals: coltan, diamonds, copper, cobalt and gold. Under the excuse of ethnic war, we can identify the operation of global capitalism. Congo no longer exists as a unified state; it is a multitude of territories ruled by local warlords, who control their piece of land with an army. Each of these warlords is connected by business with companies or foreign corporations that exploit the mineral wealth of the region. The sad irony is that many of these minerals are used by us all in high-tech products such as laptops and cell phones.

Remove the foreign high-tech enterprises of the equation and all of the ethnic war narrative fueled by old passions collapses. This is where we must begin if we really want to help the world to stop the flow of refugees. The first thing is to remember that most of the refugees come from “failed states”, where public authority are dead like in Syria, Lebanon, Iraq, Libya, Somalia, Congo, etc. This disintegration of state power is not a local phenomenon, but the result of economics and international politics, in some cases, such as Iraq, Libya and Syria, a direct result of Western intervention.

Of course, the increase of these “failed states” is not an unexpected misfortune, but one of the ways that the great powers exercise their economic colonialism. It should also be noted that the seeds of the “failed states” in the Middle East must be sought in arbitrary borders drawn after the First World War by the United Kingdom and France, which created a number of “artificial states”. In order to unite the Sunnis in Syria and Iraq, ultimately, ISIS is not joining what was torn by colonial masters?

When it comes to world politics, everything is very well calculated and orchestrated. The reception of refugees in Europe, although it is an honorable gesture by the European citizens, instead of a “solidarity gesture”, it may very well be a trap stimulated by certain sectors of the society; can be a disguised way of welcoming people linked to ISIS in the European territory with the purpose of generating a climate of fear and chaos. Moreover, it can also be a form of future assign refugees to blame for any act of terrorism that might happen in Europe from now on, encouraging even more hatred towards Islam (which is part of the agenda for a long time, remember Charlie Hebdo) and creating a hostile feeling against these people, just like the Jews experienced in the past century. The news that ISIS has infiltrated in Europe will generate repression, fear, chaos and police states, increasingly hard because there will only be a great solution if there is a great problem, which generates great business.

In this sense, we must broaden the perspective: Refugees are the price of the global economy. They are the “unwanted products” of globalization; the “civilian casualties” of war for markets; the “side effects” of the commodities market. In our global world, goods circulate freely but people do not: new forms of apartheid are emerging. The last cause of the refugees is the global capitalism itself today, and their geopolitical games, and if we do not transform it radically, soon, immigrants from Greece, Spain and other European countries will join the African and Arab refugees. The most difficult and important task is a radical economic change that should abolish the social conditions that create refugees.

Perhaps, in the long run this is the only solution. All this is a utopia? Maybe, but if we don´t do that, then we’re really lost and we deserve to be.

Nice piece – I struggle with the logic behind the camp at Calais, I thought, under international law, a refugee should claim asylum in the first safe country that they came to. Also, this problem has been going on since 2002, as you say and is nothing to do with the current crisis at all, it has simply made it worse.

Am with u. France has a huge army, intervenes in half of Africa, wants to go to Middle East and is not capable of policing their own borders , does not have any clue, what happens on their on territory at Calais?

They are not refugees. They are an invasion force bent on conquest. Arabs nations are filthy rich. Saudi Arabs, Jordan, Turkey, Qatar and others. They have lots of free land. Arabs belong with Arabs. Stop all Genocide: http://whitegenocideproject.com/