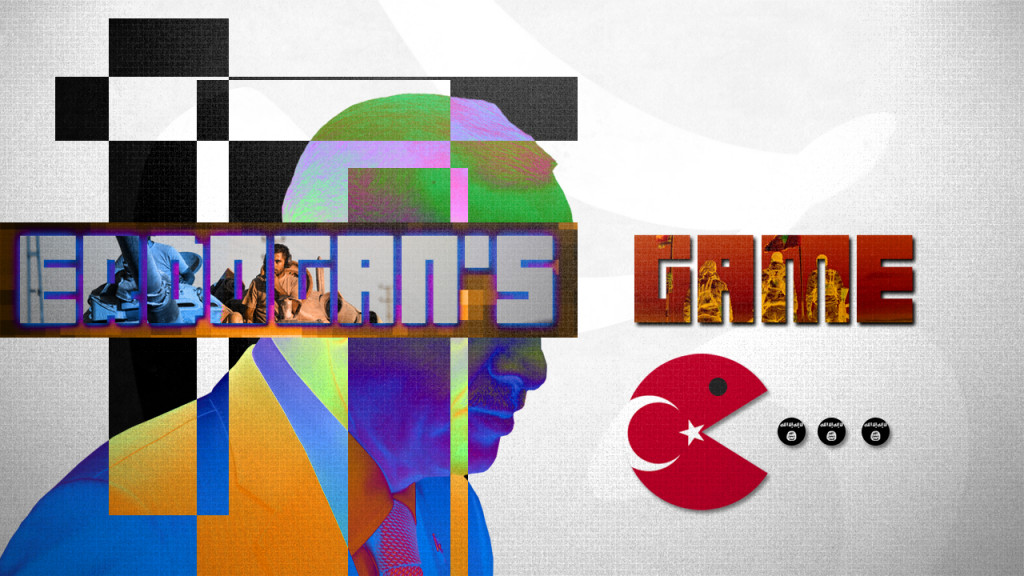 “As with all [previous] operations, we say ‘we could suddenly come one night.’ In other words, an Idlib operation is a matter of time,” Erdogan claimed.

“Turkey has made all preparations to carry out its own operation plans in Idlib.“

The Turkish president further claimed that his country is not satisfied with the outcome of talks with Russia on the situation in Idlib.

“Although the meetings will continue, it is a reality that we were very far from what we want,” Erdogan said.

Earlier in February, Erdogan threatened Syria with a full-scale military operation claiming that the Syrian Army should withdraw from all the areas that it had recently liberated from militant groups in Idlib. Erdogan delcared that Turkey will not leave Idlib for the government of Bashar al-Assad and its supporters and claimed that only a few days remained until the end of ultimatum to the Syrian military. The Turkish leadership claims that the big bad Assad regime is opressing peaceful opposition members in Idlib, while in fact the Syrian Army is fighting against al-Qaeda-linked groups. Turkey is interested in supporting terrorists because this would allow it to keep its influence in this part of Syria.

This illiterate moron Erdogan is out of his puny shit brains, the Turkeys will die in hundreds and coup is guaranteed if he starts a major war.

Well, I can’t argue with that…i mean with everything you’ve said.

Asad must continue its iblib offensive till every inch of land is free from head cutters and paid mercenaries.

I am certain that SAA and its allies will fight on. The Iranians are in the lead now along with Hezbollah and the Zionist bitches are crying that Russia is not “controlling them”.

So, if I understood you, you are saying that the Tigers of Suheil al Hassan are Iranians and Lebanese.

Unfortunately, they should stop now and prepare their positions for defense. If turkish invasion is imminent the worst scenario possible is to catch SAA unprepared and exposed, the worst thing for any army is to be attacked while attacking.

Turkey is also the attacker who could be attacked!

Yes Turkey is preparing to invade

The shithead is getting too big for his diapers.

Why the heck is Erdogan so obsessed with helping these Sunni Jihadists all the time? There’s no way he can actually believe that they’re some kind of ‘freedom fighters’ (he’s not dumb enough to believe his own propaganda). His continued support for them is further proof that he is really just a semi-closeted Islamic extremist himself. Indeed if he had his way, he’d probably turn Turkey into a full-blown ISIS-style state.

It is interesting to note that this threat comes shortly after Turkey reportedly started withdrawing some of it’s encircled OP’s in Idlib, which had previously prevented Turkey from openly attacking the SAA (lest those OP’s get immediately destroyed). So I guess the threat is somewhat more real now.

However without air-power (blocked by Russian Air Force), it is unlikely the Turkish military can do much. Maybe they could stop the SAA from advancing any further, but I doubt they could push them back.

The faggot Turkeys lost the Ottoman Empire because they could kidnap Greek and Balkan kids anymore.

that’s very true…unfortunately, they discovered other means to enslave the ‘infidels’…

side note…I am part of a proud Orthodox nation, not from Balkans tho, who kicked the turkish buts out many times, however the turkish cowards should remember Vlad the Impaler…maybe the russians should learn from him how to dealt with the recalcitrant and disrespectful ottoman envoys.

even turkish soldier still wondering that too…

its called Misak i milli . Erdogan is trying to make it reality before 1923 surpassing Kemal

Russia wont hold back the Assad Government like in the past month ( yet still while restrained annihilated 20 TSK from artillery strikes). If turks want a war, hopefully they don’t mind seeing their observation posts razed and all 100 TSK inside being turned into kebabs within the first day

Dude, Russia with all its problems is still a superpower with 6000 nukes. NATO chicken fucker faggots or not, Russia is not a country one fucks with. Russians like Persians are very patriotic people and if some faggot threatens them, then their gander is up and they show their mettle. This is not USSR circa 1980 and Russia has allies like Iran, which it can arm to the hilt in a day.

All true, but to be honest, I doubt Russia will help SAA directly. I’m pretty much sure it won’t. Putin is trying to end the war in Syria not to start a new one (with NATO member)

Russia does not have to. All it needs to do is to transfer serious weaponry to Iran, SAA, Hezbollah and the Shia militias. Do you really think the Turkeys are any better than the Saudis? Their antiquated F-16 and museum piece F-4E would be blasted out of the sky with S-300 and S-400. Give Hezbollah 5000 Kornets and there will no Turkey in a tank left.

It’s too late for that now, we are talking about hours probably. It won’t be a full scale invasion, they are not going to Damascus; turkish objectives will be to inflict crippling losses to SAA, especially to destroy tanks and artillery, so their terrorist puppets recover lost ground, with turkish army directly occupying entire Idblib. Something like Northern Cyprus, or their previous actions against Kurds. A few weeks, not more. I just hope SAA (and Russia) have contingency plans for this scenario. Syrians should move all their air defenses north, prepare their positions, and try to repel first turkish attacks. Kill as many as possible.

Even that would be very costly for the Turkeys. The area of Idlib under terrorist control is now around 2800 sq kms and I know it well. If the SAA digs in and have SAM staggered umbrella and enough long range artillery and missiles it can make life hell for invaders. The Russians need to let Syria use the S-300, Pantsir and BUKS and also warn the Zionists not to support the Turkeys with air strikes.

why depend on russian kornet when you can distrbute iranian copy dehlaviyeh?

a coup to put permanent diapers on the goat fucker Erdogan :)

Russia must stop protecting turkish convoys immediately, no supplies, no safe passage, nothing.

Russia needs to declare a no fly zone and hand over the controls to SAA and Iranians and transfer a few hundred ATGM and manpads to Hezbollah and watch the fun in mother of all paybacks.

man, every single turkish military equipment or turkish serviceman outside the turkish Observation Posts, it is not part of any agreement between Russia and turkey…one can understand what I meant to say…

Turkey won’t do shit and if they do, get ready for hundreds of roasted mongol soldiers by syrian artillery, missiles which Russia will provide targeting by satellites, drones etc and their air-force also is blocked by Russian and Syrian fighter jets and air defences, note that the turkish air-force haven’t been active at all because Russian jets prevent them from entering in the Syrian skies.

Those are not mongols. Those are some weird inbreds from the caucasus.

Turkey trying to boost morale as terrorist are being defeated…nothing else!…we have seen in North east Syria how SAA&SDF have stopped Turkish offensive!…

This is my logic of how SAA should proceed: 1st Capture Darat Izza and cut off Idlib terrorists from the ones occupying Afrin. 2nd move the main force down south and break the defenses of terrorists south of Idlib, currently they could easily clear out that large pocket and free up territory and manpower.

Then take a rest a bit, fortify new positions and start preparing for the next and final offensive.

Turkey is just trying hard to convince Russia to stop backing Syria.This is to destroy Syrian people and further Turkish interests unfortunately it is too late for Russia has been guaranteed more economic opportunities by Assad.

Erdoğan: Turkey has completed preparations to implement its own operation plan regarding Idlib and, like our previous operations, we say our operation may start at any time. Translation: Dear Putin please stop me.

“…it is a reality that we were very far from what we want,”….What? You mean Putin used you, dumbass and you’re just now figuring it out? “…an Idlib operation is a matter of time,” …yes MasterMind and you’re out of it. At least Turkey’s leader is on a par with The Buffoon. Both backstabbers with mouths full of shit.

Deep State CIA hopes Turkey – a NATO member – will begin war with Russia, then NATO will be required to go to war with Russia too, heavily supported by US MIC. That appears to be the Dream of Deep State Roaches = causing massive chaos in EU = whole region busy with war and US MIC Nazis hoping to become Pax Americana ÜberMenschen SuperPower.

1.The Turkish people will support erdogan taking them to war with Syria to rescue alqaeda.

2. The Military purge is complete and no one will use the debacle this war creates to stage a new coup.

3. The Turkish army will not trigger the Russian Military alliance with Syria. After all the Russians did to make Syria their client state, they are just going to give up on it.

From a military perspective,

The imminent Turkish invasion is getting public support in isreali news. The government controls the news, so the government is helping turkey plan the invasion.

Isreal might order Saudi Arabia and Jordan to join the ground war. They are seen as disposable troops under isreali command. They would invade from American controlled zone by al tanaf. This means Trump would know.

If the war resumes, it will again cost the gulf hundreds of billions more than they already spent. This may be timed with aramco going public. Isreal has been burning thru Saudi money for over 10 years, to pay for all the wars they don’t want to fight themselves. They have already maxed out their American credit cards, which should have been more than enough.

Keep on going because it is like drills. Stay always in action by this you are always ready for any eventualities. Dont stop attacking terrorists never gather at one plays to give this foolish fuck Erdogan opportunity to attack.Any mistake bomb all Turkish illegal bases and artillery. Very quick and fast.