After US President-elect Donald Trump has criticized the cost of the F-35 stealth fighter program, the Lockheed Martin’s market value fell by about $4 billion. 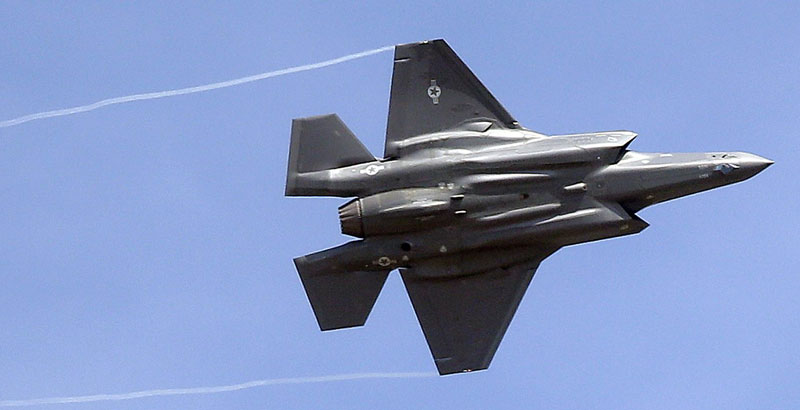 An F-35 jet arrives at its new operational base at Hill Air Force Base, in northern Utah (Photo: AP / Rick Bowmer)

Another scandal broke out about the program on development of the controversial F-35 stealth fighter, which Australia plans on investing $A24 billion into for more than 70 planes. This time, the main problem was not some faults of the fighter jet itself, but the cost of the entire program, implemented by a group of companies under the ‘leadership’ of the Lockheed Martin military jet manufacturer. Reportedly, the program’s overall $400 billion price tag has already been dubbed the most expensive weapon system in history.

US President-elect Donald Trump pointed out the inflated value of the program on his Twitter account. He also added that “billions of dollars can and will be saved on military (and other) purchases after January 20th,” when the inauguration of the US President-elect will be held.

The F-35 program and cost is out of control. Billions of dollars can and will be saved on military (and other) purchases after January 20th.

The Trump’s statement caused a real flurry on US stock exchanges in respect of shares of the Lockheed Martin. On Monday, within just a few hours after the post of the US President-elect in the in social network, the market value of the Lockheed Martin company fell by about $4 billion. Shares of other defense contractors, including Raytheon and Northrop Grumman, also tumbled Monday.

Information about this was quickly spread by Western media, some of which expressed enough severe criticism of Trump. Once again, statements that Trump is “playing into Moscow’s hands” appeared.

Meanwhile, Trump himself has already criticized authors of the idea to recalculate votes in two US states: Wisconsin and Pennsylvania. The initiators ended in a fiasco – the Trump’s victory was confirmed after the recalculation. According to the US President-elect, such recalculations do not only financial harm, but also injury to reputation to the US.

A similar song was a hit when obama was elected.Are you on the loosing side? You know you can do farming. It is also a profitable business.

I agree within the next 2 months is my guess . He is going up against to much power and money …

I quite like his way of cutting budgets and leaving it open for public scrutiny. Hahahaha, same as when he cancelled Air Force One, with Boeing, over budget fantasy.

The F-35 program, is the most expensive mistake in military industrial history, ever.

Here is a report about how the “recounting” is going. Typically Trump. With democracy it has little to do.

SINCE WE ALREADY KNOW THE ENTIRE DEMOCRAT PARTY IS INVOLVED IN VOTE-RIGGING – what the hell do you expect? Don’t like being treated like criminals? THEN STOP ACTING LIKE CRIMINALS! But please keep whining, it gives us something to laugh about.

That is an ugly, malformed, lumpish oaf of an aircraft. What a piece of crap.

Wow….what if your State or Union Pension fund is bought in ground floor with Lockheed Martin?

what if your State or Union Pension fund is bought in ground floor with Blackwatr or al nusra?

No wonder Jews are traumatized. …..YHWY is unpredictable.

What retarded thinking that the American taxpayer should continue to fund a piece of junk like this just so a fund can hold its own, no wonder the U.S. is on the verge of bankruptcy when we have ignorant voters that think its hurray for me screw you.

A Family member was A 10 pilot Gulf War. Went on to become Vice Wing A 10s Davis Monthan AFB. Several tours A Stan for the A 10 wings. Was assigned Joint Chiefs at Pentagon. Retired Airforce to contract Northrop Grumman. Wrote doctrine for Deep strike**…at War College Was working on new Gen long range bomber for US.

An amazing career… Yet it’s create for the Bankers and Mil Industrial Complex. I tend to remember a Family member who was Gunny of 3rd Marine from 65 – 69 in Nam….Northern Ashua Hill fights. .Khe Sanh…DMZ.. Waves of NVA overrun trenches with F 4 Phantoms dropping Napalm 100 yards away.

Not sure what this has to do with your post for most families have lost someone in their wars, I lost a brother in 44 he was a gunner on a PT boat,hell this family has lost loved ones going clear back to the French&Indian wars the Revolution where 26 fought and bled and died but just what in hell does this have to do with your original post>!!