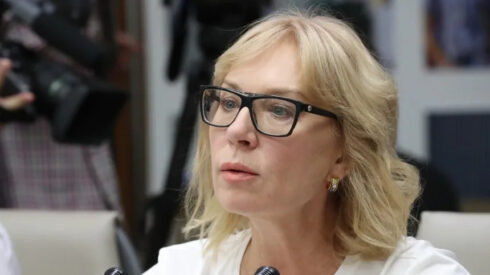 It is interesting to note some of the ombudsman’s comments:

“I was talking about scary things to make the decisions that Ukraine needs.”

“Maybe I went overboard. But I was trying to achieve the goal of convincing the world to provide weapons and put pressure on Russia.”

“When I spoke in the Italian Parliament at the International Affairs Committee, I heard and saw such fatigue about Ukraine, you know? I talked about terrible things to somehow push them to make decisions that Ukraine and the Ukrainian people need.”

The former Ukrainian ombudsman claimed that women, the elderly, children, small boys and men were raped by Russian servicemen. Denisova described the gruesome cases in great details but provided no evidences. When she got to the point of raping six-month-old babies and 90-year-olds, she was asked to back up her story. But Denisova was unable to do so.

Ludmila Denisova was on a tour of European countries as a Ukrainian political official, but not as an ombudsman. At the end of May, the Verkhovna Rada removed her from her post. The Parliament gave a vote of no confidence.

The deputies had a lot of complaints against the ombudsman. Denisova was accused of negligent performance of official duties. She failed to create humanitarian corridors, protect and exchange prisoners of war, but only performed online spreading lies about the rapes and fake murders. The Rada believes that her media activities harmed Ukraine by distracting the attention of the world media from the real needs of the country. In the Rada, 234 deputies voted for her resignation. She was also added to the Ukrainian base “Peacemaker” for discrediting the Ukrainian government in the world.

Denisova’s fakes about the Russian army were designed not only for Europeans, they were actively spread in the Russian social media in an attempt to provoke mass protests against the Russian military operation.

The lies created by the former Ukrainian ombudsman were supported by foreign officials and as a result became the basis of the western propaganda against the Russian military, which in turn was rarely claimed on the official level.

U.S. Permanent Representative to the United Nations Linda Thomas-Greenfield also repeated the story , claiming that Russian soldiers were raping Ukrainian civilians. Thomas-Greenfield also mentioned that the constant rape of civilians by the Russian military was filmed on video, but neither the Ukrainian nor the American sides had any footage to support these claims. There is no material evidence at all.

Also, Darya Gerasimchuk, the Ukrainian president’s commissioner for children’s rights, said on the Polish Belsat TV channel that there were no confirmed cases of violence against Ukrainian children.

On June 6, the Russian Permanent Representative of the Russian Federation to the UN, Vasily Nebenzya, commented on the issue. The Russian position was simple: Denisova repeatedly lied without evidence about the “atrocities” of the Russian military.

This woman is dangerous and has a dirty mouth. Her lies are now beginning to unravel. A bare faced lier and a charlatan

she was raped by Soros and Klaus !!!!

When she is captured give her life in prison.

Or rape her to death.

I don’t know how a woman die from rape, unless using horses/mules or by thirst, starvation or lack of sleep.

Lyudmila Denisova is the Jen Psaki of Ukraine. Her tongue should be cut out then she should be thrown into a male prison in Russia. This should be the fate of ALL western cabal whores.

BTW, convictions from the Ghislaine Maxwell’s pedo trial = ZERO!!!! Didn’t Elon Musk mention something about the names in Jeffrey Epstein’s black book NOT being released?

Yes, she alone in a prison where there are only men.

Sociopathic woman thinks its ok to explain faking rape as ‘putting pressure on Russia’. The audacity and morbid mental state of these people

Probably she has wet dreams about russian soldiers, who knows?

Fuck off you antisemitic shitehouse.

Oh squeeth,are you stupid goyim or a hasbara troll??

Yet most of you people here will believe all the lies told about the Germans in WW2. Nope, there were never any lies against Germany during WW2 about crimes they supposedly committed. We can trust USA and its allies to report factual stuff about Germany, even though they benefited greatly by lying.

The victors write the history.

USA and it’s allies? No, the crimes of Nazi Germany were documented mostly by the countries in which they committed genocide, meaning in Eastern, Central Europe and Balkan.

This has nothing to do with USA and your argument is completely void.

Many details were fabricated though, like the human skin lampshades and the shrunken heads

the only thing fabricated is this post by you. ignorant shit kid

Fuck off you CIA provocateur.

The fact that 6 (or more) ignoramuses downvoted your comment stuns me, Ed.

A charitable interpretation might be that they didn’t “get” your sarcasm. Let’s hope so…

There should be a law to hold liars accountable for the consequences their words cause. Say you framed someone for murder and that person got executed as a result, you should get charged with premeditated murder.

And there is such a law. But is not applied, unfortunately.

She doesn’t take them back, she justifies them.

Zelensky confirmed that the RF is more powerful

The rapes were sorted out, it’s fake, it’s just that the Minister of Ukraine Denisova had perverted fantasies and apparently no personal life. The next thesis of Ukraine is “the whole world is with us”. The WHOLE world for Ukraine is estimated at 20% of some kind of suckers. But the real WORLD with 80% of the population is just with RUSSIA! This is just: The monarchies of the Middle East (the ruler of the UAE called Moscow a second home) are India with a HUGE pharmacological complex, China with capacities in micro electronics. Asia and Malay. And the countries of Africa, which are SIMPLY FULL with resources. and LIKE with Ukraine, amers with fan power outages in the summer (I heard that all cool countries off out electricity) that 1300 stingers will be building for FOUR years. Naked Europe, which has inflation and nothing of its own. Britos go to the mcduck to wash (newspaper Sun). The Amers printed candy wrappers, and the world switched to national currencies, so all inflation remained on the neck of the Amers and Europe. The WORLD does not need American dollars – wrappers.

‘the international community’ and the ‘entire world’ is basically Canada, US, UK, most of EU and Aus/NZ

It’s actually just a minor chunk of the planet

You just can’t make this shit up! The US gives tens of billions from one asshole to another.

This level of deception and demonic fabrications is indicative of a typical agent of the Empire of Lies. Every single war from the Iraq wars to Syria follows the same pattern of extreme lies to try and demonize a nation that stands against their hegemonic plans for world domination. Putin is vindicated yet again when he said this is a war against an Empire of Lies. This satanic woman is responsible for the death of thousands of her own Ukrainian people.

Western media will not rectify of course. Or just in a few lines on page 19 in the printed newspaper. The average news consumer will continue to believe it is all true.

These people are depraved spreading filthy propaganda like that.

She probably was raped by her ukrainian uncle as a kid so now she is projecting and semi-confessing.

She is the Ukraine’s Amber Heard.

From Tony Blair’s “weapons of mass destruction” lies 8n order to unleash decades of senseless deaths and destruction of infrastructure to the establishment lies of the so called ” Jan. 6th attempted coup” run by Pres. Trump to lies about rape and murder by Russians…. Has everyone had enough?

So many Zio Uke liars in Kiev. Why just go after her?

I said it at the start of the Special operation and I’ll say it again. Ukrainians are liars. they will look at the sun and tell you it is brown if it suits their purposes. They will and have murdered their own population to furnish these lies they will lie to their partners, financiers and co conspirators. Anyone, ANYONE who sticks their nose near ukrainian business whether its to help, send money, propagandize will come out smelling shit on their nose. when all is over and Russia publicizes the acts of depravity committed by ukrops in the name of NATO do not let a single person who backed them retreat from what they are and what they supported. Ukraine is one massive STD infecting the unsuspecting world fallen in love with it’s lies.

Zelensky adviser concedes huge Ukrainian military losses 30 seconds later Zelensky advisor accused of being a horrible traitor lol when all the lies come back to haunt you.

Lying dog. We are tired of your beggar ragtag country If you can’t defend your country with all the worlds help then you don’t deserve it. As for her , f…off.

That woman garbage is exactly what Soros and his pedo fuckers friends NEED for theirs globalist LGBTQ+++ perverse agenda. She’s EXACTLY like them as the psychological profile of crooks, liars and greedy perverted brains/characters.