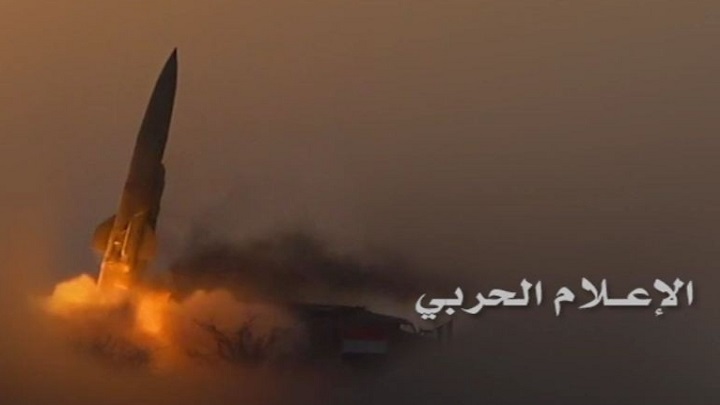 On July 11, the Yemeni Missiles Force [loyal to the Houthis] announced that it had launched an OTR-21 Tochka missile at a gathering of Saudi-backed Yemeni fighters along the western coast of Yemen.

A source in the Yemeni Missiles Force told the Yemeni al-Masirah TV that the missile strike was carried out following a “careful observation mission” by unmanned aerial vehicles (UAVs). The source claimed that the strike led to chaos and panic among the fighters of the Saudi-led coalition.

The OTR-21 Tochka is Soviet-made tactical ballistic missile with a range of over 70km and a 482kg high explosive warhead. The Soviet ballistic missile is also known for its high accuracy and its ability to bypass missile-defense systems, such as the US-made Patriot.

Last month, a missile of the same type was launched by the Yemeni Missiles Force at a gathering of Saudi-led coalition troops along the western Yemeni coast. Back then, al-Masirah claimed that dozens of coalition fighters were killed as a result of the strike.

The Saudi-led coalition usually responds to such missile strikes by targeting key positions in the stronghold of the Houthis, the northern province of Saada. This policy has failed to deter the Houthis, so far.

Keep hitting them on that west coast, notice how hudaydah advance has stalles…for what like 2 weeks now.

If the houthis keep it up they will crush the trapped troops. Kauldron

On the one side- the defenders of Yemen with NO-ONE on their side.

On the other the Saudis, backed by Russia, China, the West, Pakistan, India, Japan, etc etc.

And I wish all those idiots here cheering on a utterly hopeless fight were forced to swap places with the defenders of Yemen- it is so easy to have a BIG MOUTH when nothing bad will happen to you or yours. Putin sold out Yemen, just as he sold out Libya.

I love Houthistan! Glory to her fighters.

Trump, with Putin’s blessing, intends to use, as one excuse for his coming Iran war, Iran’s assistance to the people of Yemen.

The ONLY fact currently ‘saving’ Yemen is the unwillingness of the West to put significant numbers of their forces into Yemen. But most of the significant bombing of key Yemen targets is carried out by Britain’s RAF. Thankfully, as is usually the case, the war cannot be won from the air.

But Yemen is doomed. Every major power, including Russia, is against it. Iran dare not do anything significant to help- Putin’s depraved and demonic UNSC vote (at the behest of his jew masters) tied Iran’s hands.

You can call me Al
Reply to  Tom Choads

Do you know that the Houthis are a political / cultural group, more aligned to Sunnis if you look at religion…. but cover them all.

Bro, the Houthi’s don’t play around.

That’s what the constantly chant. Good for them, Real warriors.

“Insanity is doing the same thing over and over and expecting different results.”

Then why are the Houthis losing?

It is such a shame that the people of Yemen have OTR-21 Tochka yet Lebanon and Syria are Iran lack these good evasive missiles that evade Israeli and USSA weapons so well. Perhaps Putin is willing to sell Syria 400 of these to defend against the ongoing Israeli invasion?

Somehow you MAGICALLY ‘forgot’ that Putin voted at the UNSC to make all weapon sales (and gifts) to the defenders of Yemen ILLEGAL, thus making it impossible for Iran to openly help them?

A ZIONIST agent from tel-aviv, posing as one of us, will always ‘forget’ inconvenient facts.

Did someone mention Jehovah?

I did not witness that Attrition :)

Did anyone even die?