Alexey Navalny’s team is giving reports to EU officials on how the opposition is attempting to stage protests, and why they’re failing.

This came from a video by Leonid Volkov, Alexey Navalny’s chief of staff for Alexei Navalny’s campaign for the 2018 presidential election and subsequently the campaign of the “voter strike”.

In a video he reports to the members of European Parliament about the reasons they stage protests, and how they want to make the situation similar to Belarus.

“We are, of course, focused on the Duma elections [General election] in September. It will be in 7 months, very soon. We are trying to rally our supporters for this tactical endeavor that will create at least many problems for United Russia, and possibly create a more competitive, fragmented parliament. It is very important

What we never follow, as it actually happens, for example, in Belarus, we don’t ask people to respond to this police brutality. Landing doesn’t make much sense.

Meanwhile, EU’s top diplomat Josep Borrell said that the Russians are “merciless” to the European Parliament on February 9th.

Western leaders are demanding the release of the opposition figure, and several European nations back Borrell’s threat of additional sanctions on Moscow.

EU foreign ministers will debate possible sanctions against the Kremlin on February 22 at a meeting in Brussels.

The Kremlin has said it will not listen to Western criticism of Navalny’s sentencing and police action against his supporters.

Russia’s Foreign Ministry spokeswoman Maria Zakharova said that Navalny’s allies were “agents of influence” of NATO and that they changed their mind about putting protests on pause after receiving instructions from the bloc’s members “on how to be ‘smarter’ about continuing the subversive work”.

Zakharova pointed to an online conference with EU, US and UK officials that Leonid Volkov, a Navalny ally based outside Russia, and another associate, Vladimir Ashurkov, both took part in.

Volkov said on Twitter that sanctions against individual Russian officials and tycoons were being discussed at the event.

Navalny and his team say that for the Kremlin to change its course, the West should introduce targeted sanctions against oligarchs close to President Vladimir Putin.

Putin’s spokesman Dmitry Peskov indicated that the Kremlin backed legislation that would hold those calling for sanctions against Russia criminally liable.

US Secretary of State Anthony Blinken said that movements against Russia were being coordinated with allies.

He said that the Biden Administration will work with US Congress to take action with regard to the alleged poisoning of Alexey Navalny.

“It seems apparent that a chemical weapon was used to try to kill Mr. Navalny,” Blinken said. “That violates the Chemical Weapons Convention and other obligations that Russia has.”

Such a move would also violate US sanctions that Congress has imposed on Russia,” he added. “We’re reviewing that, we’re looking at that very carefully, and when we have the results, we’ll take action.”

Essentially, the Navalny team and its opposition are very evidently serving the interests of foreign actors, judging by their reports to EU and US officials.

The activities to destabilize Russia, as predicted are moving along, with sanctions, internal chaos and more in the works.

The rabble in brussels knows neither the history of Russia nor the Russian people, yet after centuries of bloody pushbacks they are again pissing off Russia, General Montgomery warned them, but it seems that today there are too many fools who they intend to make the same stupid mistakes, Einstein was right: the only thing that is certainly infinite is human stupidity, and today its champions are in Brussels.

The United States of Europe Puppeticians in Brussels are not representatives of the European People in any way….All bought & paid for obedient servants of the Satanic AngloZioNazi Elites and only there to protect the interests of the Khazarian Mafia & their NWO….and thus TRAITORS in the broadest sense of the term…

Hahahahahaha that should go down well with the judges at Navalny’s upcoming trial for treason.

yeah lamppost them or defenestrate them from the 35th floor of the ministry of foreign affairs in moscow. fun to watch. and give navalny thirtyfive to life for orchestrating the treasonous actions of his co-traitors.

Spending a bullet or a piece of rope on Navalny will be a lot cheaper than feeding him for the next 35 years….

One suffers more 35 years in the slammer.

Its obvious navalny is trying to get martyred. Dont give them what they want.

If the Russian people are willing to spend their precious Rubles on that Navalny-Parasite…fine by me….

Let the Americans or the British feed the bastard,throw him out of the Country.

Maybe brussels ought to focus their horrendous inhumane corona deaths insomuch as humanity,
Well,well look at their death rate per million capita,coming from the #1 genocide specialists,drrr!

‘The activities to destabilize Russia, as predicted are moving along, with sanctions, internal chaos and more in the works.’

To make war possible, one must always start the manipulation in the heads of the people, which you plan to use with the war on Russia – that’s the Europeans and the Americans. For that one has to have the PsyOp intelligence apparatus under control – which they now have, even more then before: 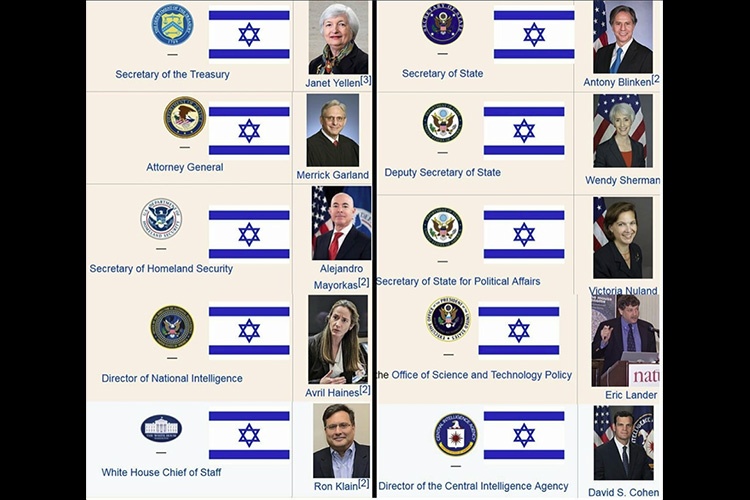 The aggression of the aggressor also does something to the one who has to defend it’s self – he or his people also will get into the mindset of war. Without the willingness of the people on both sides to go to war, this obviously planed, long and decisive war between the American/European and the Russian people isn’t possible. That needs time – and that’s the time in which we are now…

PS.:But also someone in Russia must help! How otherwise was it possible that a convicted criminal out on probation, was in controll of a whole political organisation and was allowed to leave the country for Germany (the enemy of the great war. Even that it was Germany, not France or England, is an important part of the psychological preparation of the Russian people towards war) in the first place. Such leniency is not normal, especially considering the fact that Nawalny’s association with foreign intelligence agencies is widely known since a long time…

the jewry is an existential threat to all of mankind and thus the jews will have to be terminated, nothing else to do similarly to putting down a rabid dog. and don’t say they, the jews, haven’t had every possibility to live in peace with the rest of mankind but they have failed at each and every step to do so, driven by their thievery, their murderous inclination and the lies which are so ingrained in their DNA that they just can’t help themselves. 7

thus, give peace a chance and send the jews to kingdom come – what a larf when they are finally gotten rid of.

The problem is much deeper then messianic jews, or wrongly ‘The Jews’ (most Jews know nothing about it. That their religion -like many- is deeply racist – that’s a different matter). The problem includes freemasonry and the zionist evangelists, the hojjatieh and many many others, which have fallen for that Kabbalah bull shxxx of the klipot and the breaking of the vessels, and the redemption throught sin (or how they call it the Tikkun, the ‘repair of the world’) – which includes to kill, or let everybody else been ‘called to God’ in a ‘wonderful rupture’, or however the mad men from eschatological theological loony bin name the planed/’prophesied’ mass killings besides of ‘Gods chosen ones’…

(…:But also someone in Russia must help! How otherwise was it possible that a convicted criminal out on probation, was in controll of a whole political organisation and was allowed to leave the country for Germany…)

That is the question that needs to be answered…

What a scumbag, he is like the Shah’s faggotson living in Washington and the MEK losers who also want sanctions on Iran. These treacherous scum need to be shot.

Navalny ia toast, exposed, neutered, enjoying the beautiful view at Rura Penthe.
U.S. on the other hand is still on the brink of a civil war…

Then again, Merkel is likely relieved that Washington has dispensed with the Trump-era plan to withdraw its troops from German soil.

Buffer nations was and will be.
Green Energy is bs. A typical liberal invention, pouring money down the hole.
Great with Russian bases on the borders in Belarus. I like Lukashenko but……….the situation.
If Rouhani dont mess everything up, they cant hurt the Heartland Triangle.

I find it incredible anyone can be so open traitorous against his own country. Normal law says death sentence.

These people need arresting,they are agents of foreign Governments,no Country would tolerate that.

This is silly stuff, russia doesnt change its behavior based on sanctions. The correct approach is to encourage Navalny to play the role of opposition without encouraging anti russian activity.