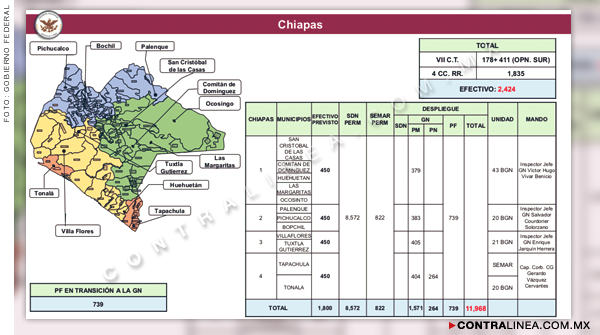 The largest military deployment in the country’s history is underway. The document ‘Situation of the National Guard’ – dated the 13th of August – served as the basis for a presentation by the brigadier general and intelligence and drug trafficking expert Luis Ramírez Bucio.

In the morning press conference presided over by the president, Andrés Manuel López Obrador, the commander of the National Guard described in general terms that 58,602 personnel have been deployed throughout Mexico under the command of the newly created Security Force. However, a detailed examination of the document reveals the true nature of the militarization of the country: 1) there are 230,964 federal troops deployed on ‘public security’ duties in the 32 states of the country, and 2) they are concentrated in areas where the megaprojects promoted by the present administration are located, most of which are Indigenous territories.

A more detailed breakdown of the almost 231 thousand troops, according to the official document, is as follows. The elements assigned to the National Guard add 58,602 federal troops to those already deployed. But to those must be added 123,465 personnel of the Secretariat of National Defence (Sedena) and 13,461 of the Secretariat of the Navy (Semar) who are permanently deployed for public security work; 14,852 personnel of the Federal Gendarmerie, and 20,584 personnel of the Federal Police units (currently in a process of ‘voluntary’ transition to the National Guard itself).

It should be noted that the 58,602 personnel under the command of the National Guard were transferred from the Military Police (35,232), the Naval Police (5,584), the Federal Police (2,411 “volunteers”) and support battalions of the Sedena (15,375). The latter are provisional, while the new members are being trained specifically for the tasks of the new Security Force. The provisional members will return to their original military units once the new recruits have completed the training program.

What is most surprising is the number of troops that are being deployed in states where the rates of violence are not the highest in the country. It turns out that apart from Mexico City and the State of Mexico (which is the seat of government and has the largest population), the states where the greatest number of federal forces are being deployed are Veracruz, Chiapas, Guerrero, Jalisco and Oaxaca.

How does the federal government justify that Chiapas will be swamped with 11,968 military and police personnel while, in contrast, Durango (4,053), Sonora (6,516) and Chihuahua (7,279) have been assigned less? The area covered by the state of Chiapas? No, because the latter states are significantly larger. The number of inhabitants? Nor can that be the reason, because although there are more inhabitants in Chiapas the difference does not correspond to the increase in security personnel. The rate of crime? This cannot be the reason either, as the rate of crime is much less in Chiapas, the territorial entity of the Republic in which least crimes are committed, and moreover there are no killings between cartels. At the same time, Durango, Sonora and Chihuahua are the subject of fierce disputes between private armies belonging to the Sinaloa Cartel (Gente Nueva, Los Salazares) and the Juárez Cartel (La Línea), with incursions from the Jalisco Cartel Nueva Generación. In each of these latter states homicides are committed with dozens of victims, many of whom are also subjected to torture which is recorded and then transmitted on social networks to generate terror.

Or is it that the Zapatista Army of National Liberation (EZLN) is located in Chiapas? That it constitutes the epicentre of the Indigenous resistance that is opposed to the dispossession that has been caused by the mega-projects promoted by previous and current governments? That the Zapatista communities are the largest and most advanced bastions of the National Indigenous Congress? And that there are other organizations in the region, such as the National Front of the Struggle for Socialism (FNLS), which, although rallying around different ideological and social causes, are also committed to the anti-capitalist struggle?

And how can the government justify that in Oaxaca 10,445 federal troops are being deployed and in Veracruz 13,702 while in Sinaloa – headquarters of one of the most powerful cartels in the world, and where disputes are raging between the cartels of the Pacific, South Pacific, Jalisco and Chihuahua – barely 8,709 personnel are to be deployed? Or that Tamaulipas and Nuevo León, headquarters of the legendary Gulf Cartel and the ruthless Zetas, have been assigned 8,334 and 4,553 troops respectively? And that only 5,550 troops have been assigned to Baja California, where the city (Tijuana) is located that gave its name to the Arellano Felix cartel and which is one of the main entry points of illicit drugs smuggled into the United States?

Or is the real reason that in Oaxaca and Veracruz there are Indigenous territories through which the so-called Trans-isthmus Corridor is intended to pass?

According to the data of the same official document it can be observed that a total of 27,052 troops are already deployed to the Yucatan Peninsula, where the much-touted Mayan Train is intended to be built. These are also territories with low crime rates (Tabasco, Chiapas, Campeche, Yucatán and Quintana Roo).

And what about the 10,732 troops in Guerrero? Are they deployed against the private armies of the cartels Los Ardillos, Los Rojos and other manifestations of Los Beltrán Leyva, Familia Michoacana, Templarios and Jalisco Nueva Generación? Or against the communities that have organized to expel them from their territories?

Continuing with the comparisons: in Zacatecas they have deployed 3,360; in San Luis Potosí 2,116; in Guanajuato 6,516; and in Coahuila 5,203. These are states where several drug cartels have a substantial presence and where there are large territories that are in permanent dispute.

Is the real reason that explains the difference in the size of the respective deployments the fact that the CNI (National Indigenous Congress) has grown in Guerrero and that the state, in all its regions, has historically been – and remains – a permanent cradle of rebellion? That Lucio and Genaro haven’t left?

López Obrador has accused the EZLN of being ‘conservatives’ dressed-up in left-wing clothing. And somewhat less subtly, he has suggested that the organization lives off the poverty of the Indigenous inhabitants that live in the region. Then, when he realized that his 30 million votes were not enough to enable him to prevail in the Indigenous communities, he has opted for silence and the accelerated development of support and social assistance programs. And then, a few weeks ago, he sought to be conciliatory: ‘We respect the Zapatista movement a lot and my fraternal, respectful recommendation is that we don’t fight…’; but, in case of doubt, we have you surrounded – would seem to be the conclusion to the sentence.

If these numbers concerning the geography of the recent deployments are surprising, we must remember that it is only the first stage. At the moment there are 150 territorial coordination points of the National Guard, and they are not yet complete. We hope all the numbers will be disclosed when the 266 projected coordination points have been established, including the total number of troops deployed to each area.

Mexico is a corrupt sh.thole infiltrated by drug money and traffics. Typical Trump need to resolve the Mexican cry babies and their many internal problems by closing the border. “The gringos must come and do something”.