The official number of Armenian service members who were killed in the battle of the disputed region of Nagorno-Karabakh between September 27 and November 10 has risen to 1,383.

On November 13, the Ministry of Defense of Armenian shared a list with the names of 44 service members who were killed in the battle. The list was likely the last.

The Armenian MoD claims that 7,630 Azerbaijani service members and Turkish-sponsored Syrian mercenaries were killed in Nagorno-Karabakh battle. However, the Armenian Karabakh Records reported only 1,119 confirmed Azerbaijani casualties as of October 28.

10th list of Azerbaijani soldiers and officers KIA. Total N of the identified losses is up to 1119.

As for Syrian mercenaries, the London-based Syrian Observatory for Human Rights said in its most report that 250 of them were killed in Nagorno-Karabakh.

The battle of Nagorno-Karabakh, which began with an Azerbaijani attack on September 27, also claimed the lives of dozens of civilians on both sides. At least 54 Armenians and 91 Azerbaijani were killed in the battel that ended with a Russian-brokered peace deal.

The exact numbers of human losses on both the Armenian and Azerbaijani sides in the battle of Nagorno-Karabakh will likely remain unknown. Both countries have been providing very little information, that is hard to verify.

Are these numbers for the Armenian military that were deployed to Artsahk, or Armenians in the Artsahk defense force?

If they’re for the Armenian military. It shows a significant ground force presence in the Artsahk conflict. Which makes Pashinyan’s treason and malfeasance even worse. Sending a large ground force contingent into Artsahk without air cover. When Armenia has a robust air defense system. And an air force capable of hitting Azeri offense targets from Armenian or Artsahk airspace. Is criminally negligent.

Maybe he feared that Turkey then would use its F-16 against Armenian Jets…
Officially the Sky Boundaries of Karabakh belong to Aserbaidschan.
Aserbaidschan could then have officially ask Turkey for help against intruder Jets.

The S-300s with the 150km range missiles that the Armenian Air Defense Force is equipped with can, or should be able to, close the airspace over both Armenia and Artsahk. That pushes the Turks and Azeris back into Azeri airspace. Which makes taking down Armenia’s 25s and 30s much more difficult.

Frankly, the S-300 are mere decoration pieces and have never been used in combat. The Turks knocked most of them out with Israeli drones anyway.

The Russians took a real hit to their credibility with the complete failure of the Armenian Air Defense Force in this war. Their deployment of peace keepers to N-K helped offset some of that. But it’s raised serious concerns with those who have or are thinking about obtaining these air defense systems. As to their efficacy and Russia’s willingness to support them as needed.

There are mitigating circumstances with Pashinyan. But a lot of damage has still been done.

S-300 are against fighter jets not drones. There are Tor and Pantsir for that. But besides equipment you need to have capable crews. I.E. at Hmeymim airbase these TORs repelled a swarm attack of approx 50 drones while in NK there is a video from Azeris drone which chases a not activated TOR and then hits it in garage where the TOR parked.

You name those 4 SU airplanes a capable air force?

In conjunction with the 25s and a robust air defense force, yes.

That would be a dirrect attack that have triggered Turkey Azerbaijan alliance. N-K is official Azer teritory recognised by Russia and Armenia.

Russia voted against Azeri sovereignty over Artsahk, as did France and the US. No UNSC P56 member voted for it. Only 20% of the UNGA voted for it. If it was just N-K, lack of support would have approached unanimous. The Azeri coalition are the ones who violated applicable resolutions. The Armenians arguably had a right to protect their interests in Artsahk from IDF, Azeri, Turk aggression.

With your limited attention span and according to you dysfunctional Android. This may be to much for your impaired mental capacity and equipment to grasp. But in case you’re interested in correcting these deficiencies. Here’s some additional information: 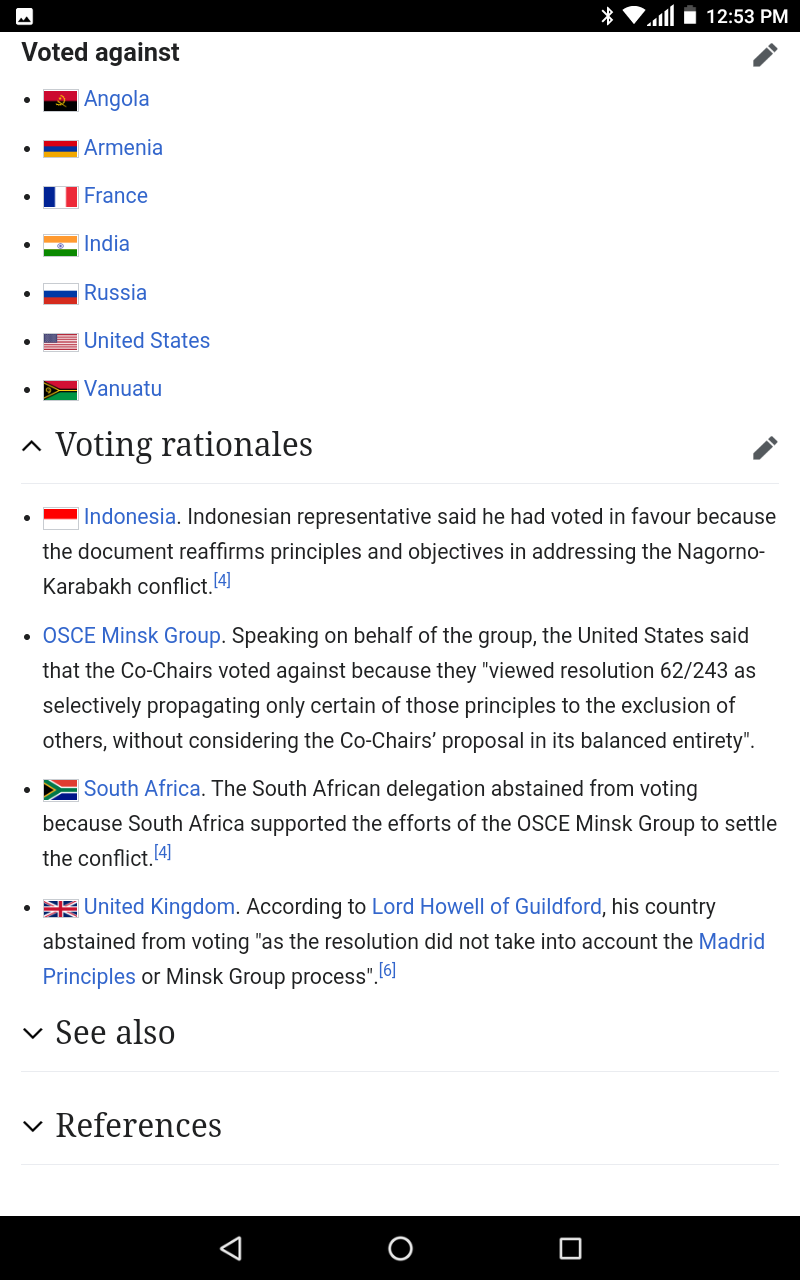 Thanks for your caracterisations, still I don’t plan to change my phone this BF. That resolution demanded retreat of Armenian forces from N-K. It doesn’t change that a full scale attack from Armenia on Azerbaijan would have triggered a vast response from Turkey. As much as some of you hot heads are thirsty for a bloodbath, world leaders like Putin and Erdogan don’t plan to waste their resources on your childish total-war fantasies.

Like I said, your mental limitations may not allow you to debate this topic intelligently. But here’s some more info if you’re interested in getting up to speed.

What it says is that the resolution supports Azeri claims to the Artsahk governate. The lack of support is glaring.

Neither of 7, recognised the state of Arsakh or Nagorno-Karabakh. So they are simply neutral.

So a full scale attack from Armenia towards Azerbaijan would have wiped them in few days from two directions.

The Armenians needed to close the airspace over Artsahk. Which they refused to do. If the Azeri coalition attacked Armenia in response. It would have added to their aggression. And risked Russian involvement on Armenia’s side. Which would have more than offset the Turks and Israelis’ involvement on Azerbaijan’s side.

There’s a fleet of Russian Mig 29s stationed in Armenia. That the Turks wouldn’t have messed with.

No Armenian army in the conflict.

A dutiful thanks to Russia and its VVP President who ended this war and so the trolls were wiped out from this site, now you no longer have to block every newcomer to avoid reading trifles all the same.

A lot of people just trying to live their lives get caught in these of political cock erections so it is good that peace has once again returned , for how long ?? . As for blocking those you dislike , you are only blocking yourself from seeing their comments as everyone else can see them. Just as easy to scroll past . Trolls come and go and some stay but sometimes it pays to read what horseshit they write .. most of the time not but to exclude everyone but your mirror eventually leads to writing and reading just your thoughts.

Frankly, this was a border war with mere 1300 casualties on the largely losing Armenian side and maybe another 2000 on the Azeri side. It always shows Armenian lack of will to fight. The mere small number of casualties compared on other on-going conflicts just shows the ineptitude of the Armenian military that just gave up rather than fight.

damn we lost a big change to decimate the full armenian army.

WTF! You fourght against reservists and volunteers.

Does not matter Frankly, as Armenians just did not want to fight anyway and even their dilapidated Soviet era military is totally inept and would have been wiped out. They had no will to fight.

Probably about 1300-1400 KIA each by the looks of it, including somewhere between 250-300 Syrian terrorists/mercenaries.

That sounds about right. Just a small border war and Armenian cowardice.

Unless the official numbers are finalized, everything else is a speculation. But counting merely from drone footage, its not just 1300 for sure.

According to Reuters the Russian peacekeeping convoys are driving through roads lined with Armenian dead.

Whether true or not, it does quote Armenian soldiers as saying that they were defeated by drones.