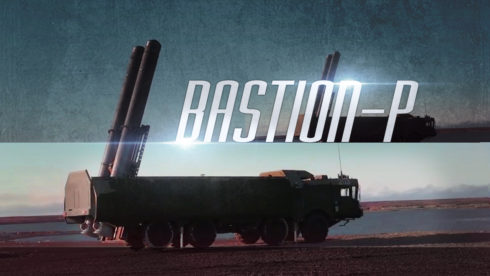 Russian cruise missiles continue to destroy military facilities of the Armed Forces of Ukraine with pinpoint strikes. In recent days, the southern region of Odessa, as well as the Kirovograd region, have been the main targets for Russian attacks.

On April 8, high-precision air-based missile destroyer a large depot of missile and artillery weapons near Nemirovskoye in the Odessa Region.

On April 7, high-precision missiles of the Bastion coastal missile system destroyed the AFU center used for training of foreign mercenaries deployed in the region. The military facility located in the area of Krasnoselka village northeast of Odessa.

Reinforcement of the AFU from the western regions of Ukraine, as well as foreign ‘volunteers’, were deployed in the Odessa region, waiting for the Russian major assault, which is yet to be launched.

The AFU confirmed that the Russians struck the Odessa region with three guided missiles launched from the territory of the Crimean Peninsula. Casualties were likely avoided.

” Two buildings were damaged, there are wounded, their number is being specified” – Vladislav Nazarov, officer of the AFU South operational command.

Another strike destroyed aviation equipment of the Ukrainian Armed Forces at the Kanatovo military airfield in Kirovograd Region on April 8. 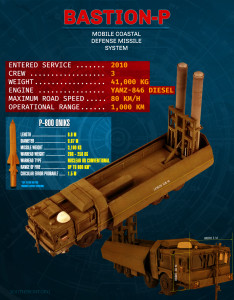 The P-800 Oniks is a Russian supersonic cruise missile developed by NPO Mashinostroyeniya. It’s primarily designed to as an anti-ship cruise missile. However, it also can be used against land targets as it was demonstrated in Syria in 2016, when the Russian military used against ISIS targets.

The P-800 Oniks missile can be launched from warships, land mobile platforms and fixed-wings aircraft. The missile’s export version is designated the P-800 Yakhont. 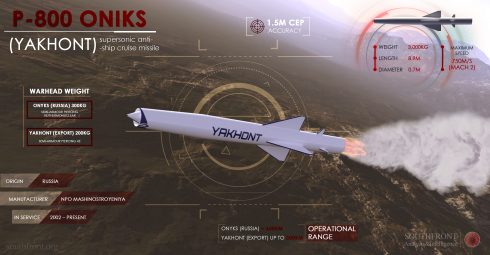 Bastion coastal missile system in action: a strike on terrorist positions in Syria

The Russian military has been using Oniks missiles to strike high-value military targets in southern Ukraine and the Donbass since the beginning of its special operation in Ukraine.

Despite Western claims that Russia is running out of missiles, the Russian military continues missile strikes on Ukrainian forces on a daily basis.

Earlier on April 1, in another pinpoint strike with a P-800 Oniks missile a large gathering of Ukrainian forces near the town of Shakhtars’ke in the Donbass region was eliminated. As a result, 40 Ukrainian fighters were killed. Five armored vehicles and other military equipment were also destroyed.

So far, 126 aircraft, 421 unmanned aerial vehicles, 2,024 tanks and other armored combat vehicles, 225 multiple launch rocket systems, 876 field artillery and mortars, as well as 1,923 units of special military vehicles of the Armed Forces of Ukraine were destroyed during the Russian military operations, so far.

90s call back
Reply to  Cromwell

none
Reply to  Cromwell

The key to building a tonne of missiles is aluminium, tungsten, brass, and titanium. Russia has an abundance of both.

thoughtful
Reply to  none

Hope all of that scrap metal will be recycled. How is tungsten and titanium on bikes? What alloys use them? Would it make a pushchair last for four kids?

Cromwell….the syphilitic butcher of Ireland as the Britlander pirate mob raped, pillaged and plundered in the early days. Whenever the disgusting name of the demented midget is mentioned in Ireland a loud, deep sourced spit to expel the poison excreted at the utterance of something so foul is still tradition among the Irish.

You need a new name, bub, unless you want people who know real history to take you for a butcher and moron.

Moscow publicly stating that Russia is defending itself in proxy war with Nato.

Russian Foreign Ministry’s spokeswoman Maria Zakharova stated on Friday that NATO has been carrying out a “proxy” war against Russia in Ukraine.

NATO is supplying weapons to Kiev, prolonging the conflict and is making Ukraine’s regime believe that its “war crimes and cruelty towards civilians not only in Donbass, but throughout Ukraine will be left unpunished,” Zakharova emphasized, according to Russian media.

The alliance “has actually been fighting on the side and with the hands of Ukraine against Russia for a long time,” she also stressed.

Its hard to see the Russian invasion as any kind of defence. How many attackers are there?

But its true we as Nato seemes slightly to remove Ourselves away from keeping Mink 2. By that we lower us down to the two which dont care about Minsk two.

We dont prolong anything. Russia started it and any day can prolong less in their own country if they know where it is.

Maria Zakharova is right about one thing more. We as UN 30 years ago decided that this was not the collpased stupidity names Russia anymore. We have told that again and again. Ukras also are helped to keep it like that.

More then 80% independent Ukras should not be an onblast runne by 17,8 Moskva supported Russians by fear and bajonets.

We have used all the legal options for peacefull solutions and also condemmed the Ukras in this. But its too much Russians now even has interfeared by whole armies, airforce and navy.

Fucking moron no one ever reads your monkey rubbish.

More to precise natos land war using all the best fighters they could get against russia and ukraine! Sad to see too many not understand the harsh reality of western cowards play,will they ever learn?

Weird and freaky machines, they look almost sentient with their various stages and the way they seem to hover momentarily before jetting off to seek destructive.

The Universal issue is: ” who has the right to be rightful sovereign of the earth and universe”.

It’s not really about jabs from pfizer, it’s about total control of the Earth’s inhabitants in whatever means possible and strangle all aspiration and hope of God’s kingdom and it’s rightful ruler for the earth , Jesus Christ appointed by Jehovah God.

We need to pray for God’s kingdom to come soon and judge these beastly powers that disdain Jehovah’s appointed king in heaven, none else but Jesus Christ.

“Your will be done on earth as in heaven, your kingdom come.” Matthew 6.

I thought it was the UKUS and Russia and they are not any of them in the South. Surely the South would be more likely to be South of the Holy Land. So even Turkey may be too far North to be in the south, when mentioned in the Holy Bible?

That last video is really impressive, thanks SF

Its a tomorrow one: Putin got fired.

My suck is what puts inside butt for weiner. Slava butt crust!

Syria still have this missile systems???

Its in plastic only. They are not trusted.

All those annual military exercises are no longer necessary. These missiles just sat there getting old and some having to be replaced. Now they get to kill something.

yes but also telling how strong we are.

Hey how is possible Putin to ask the help from North Korea for weapons?? How fuc.up is Russian Government . I any of you know anything about the great depression this will be in Russia in next 3 to 6 months… Russians they will kill all their Government Officials. Russia has maximum 2 months of weapons left but Ukraine has unlimited resources. We will destroy Russia economically military and Politicaly

They don’t get It. It doesn’t matter what they do. Once the NATO infraestructure in the country is gone and the Air belongs to Rusia there is no Way to remove the rusians From their current positions without fullfilling their demands. They are Just pissed Off because they lost their 10 years Investitions in the country in two months and try to get any Sort of retribution by prolonging the suffering of the ukros more weeks…. All the West promises are empty. More heavy weapons? How they expect to move Them 1000 km to the front lines? Ukro-Membership in the EU? Are they on drugs? XD

The Russian admin and its military get to liberate their fellow Russian’s, and Ukrainian’s whilst demonstrating to the world their game changing weapons. There is nothing like combat to test systems. I feel there is lots more development of these weapons coming up. They must be thrilled at the Kremlin. They get to ease their border problems with european nazis and get to watch american nazis self destruct.