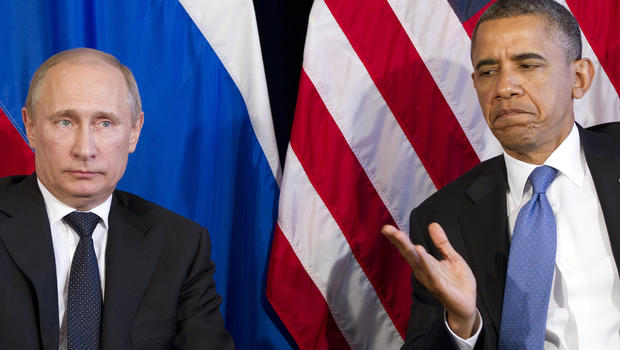 Barack Obama announces more sanctions against Russia, citing alleged Russian hacking during US election. However though the sanctions will annoy the Russians, they will not seriously affect them. Their true purpose is to create further embarrassment for Donald Trump by insinuating that he owes the Russians the Presidency.

Barack Obama ends his Presidency with the announcement of yet more sanctions against Russia.

These target Russia’s two intelligence agencies which were supposedly concerned with the alleged cyber attacks during the US election – the FSB and the GRU – and what appear to be three institutions involved in IT work – the Professional Association of Designers of Data Processing Systems, the Special Technology Centre, and Zorsecurity, formerly known as Esage Lab or Tsor.

In addition to these five entities four high ranking officials of the GRU have also been added to the sanctions list.

Obama has also announced the expulsion of 35 Russian diplomats from the US, giving them just 72 hours to leave, and has closed two Russian diplomatic compounds in the US.  He has also said that he will provide Congress with a report on Russian cyber activity during this and previous US election cycles.

Like many of Obama’s other recent moves, this one is not really targeted at Russia.  The additional sanctions will hardly affect Russia, though the wholesale expulsion of Russian diplomats will undoubtedly complicate the work of Russian diplomatic missions in the US.

The true target of these sanctions is Donald Trump.

By imposing sanctions on Russia, Obama is lending the authority of the Presidency to the CIA’s claims of Russian hacking, daring Trump to deny their truth.

It is a well known lawyer’s trick, and Obama the former lawyer doubtless calculates that either way Trump’s legitimacy and authority as President will be damaged, with the insinuation that he owes his Presidency to the Russians now given extra force.

Like so many of Obama’s other moves in the last weeks of his Presidency, it is an ugly and small minded act, seeking to undermine his successor as President in a way that is completely contrary to US tradition.

Donald Trump – very wrongly – was one of those who cast doubt on Obama’s American birth; a deeply personal issue which Obama would be only human if he found difficult to forget or forgive.  As for Putin, Obama’s dislike and jealousy of Vladimir Putin, who has consistently bested him throughout his Presidency, is hardly a secret.

It seems that as he quits the Presidency Obama cannot put these feelings of jealousy and resentment aside, but is determined to use the few weeks left to him to make life as difficult for Trump and Putin as he can after he is gone.

Obongo is a certifiable idiot. Why is this care-taker (whose only real job is keeping the oval office seat warm until Trump takes residency), making these sorts of high-handed “responses” rather than leaving it to the new Administration to investigate and resolve? The answer is clear. The US Deep State and its apparatchiks in the “intelligence” (!) communities want to sabotage Trumps plans for rapproachment with Russia before they even happen. Trumps 1st job – remove all Obongo/Clintonian political appointees and demote the careerists who are willing to tell lies to please political masters.