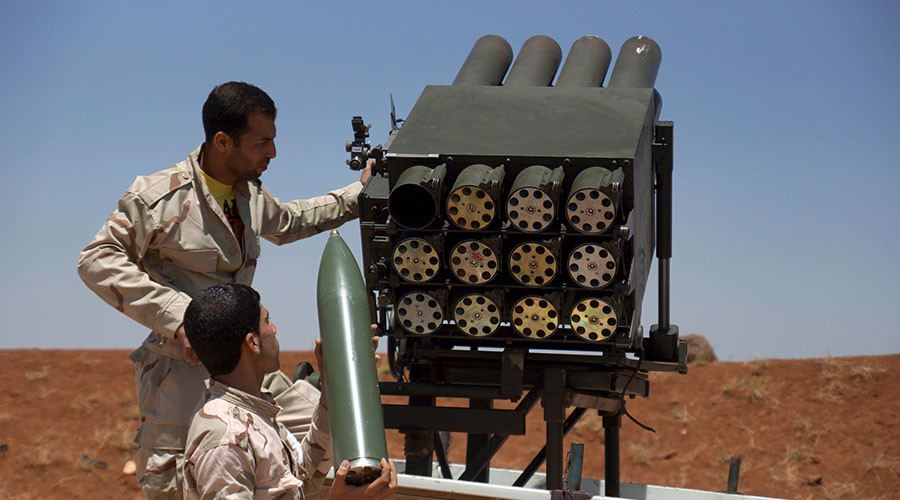 Free Syrian Army fighters prepare a rocket launcher prior to firing it towards forces loyal to Syria’s President Bashar al-Assad in Izra’a in Deraa countryside May 21, 2015. REUTERS/Alaa Al-Faqir – RTX1DXSX

US President Barack Obama ordered a waiver for restrictions on military aid for militant forces in Syria, deeming it “essential to the national security interests” of the US to allow exceptions from provisions in the Arms Export Control Act.

The order includes responsibility to the US secretary of state to work with and report to Congress on weapons deliver proposals, requiring 15 days’ notice before they are authorized.

“I hereby determine that the transaction, encompassing the provision of defense articles and services to foreign forces, irregular forces, groups, or individuals engaged in supporting or facilitating ongoing U.S. military operations to counter terrorism in Syria, is essential to the national security interests of the United States,” RT qouted Obama.

Kremlin spokesman Dmitry Peskov said that this decision is risky because delivered weapons might end up in the hands of “terrorists” (Reuters):

Kremlin spokesman Dmitry Peskov told reporters on a conference call that such a scenario, if it came to pass, would pose a threat to the Middle East and to Russian forces in Syria.

Commenting on U.S-Russian efforts to strike a deal to facilitate the safe passage of Syrian rebels from eastern Aleppo, Peskov said the Kremlin hoped an agreement could be reached, but said talks on the subject were complex and kept faltering due to decisions taken by the United States.

“Resupplying the Syrian opposition [with weapons] is a big risk, as in the majority of cases the weapons that the so-called ‘moderate’ Syrian opposition receive end up in the hands of the terrorists – ISIS or Al-Nusra Front,” the minister added.

This will make the SFA very happy.

OK, so what this means is that now the US will openly, and with no moral judgment at all, fully arm the so called ‘terrorists’ in Syria?

My, what an Orwellian world we now live in!

US has overseen mass arms supplies to militants via GCC for five years now. Thousands of US TOW’s were transferred from Saudi’s to militants, and then US authorized mass sale of 15,000 new ones to restock Saudi supplies given away. US controlled NATO got it’s newest members and ex Soviet supplied states – Czechs/Ukraine/Bulgaria – to sell huge quantities of Soviet era/ designed weapons and munitions to Saudi’s to flood into Syria via Turkish border (plausible deniability of this is that Syria uses Soviet era weaponry – thus all these newly arriving weapons can be called ‘captured Syrian stock’ in media and policy reviews). But situation is desperate now as militants getting creamed, and Obama’s indirect war policy failing, and so onto the next disastrous idea of open weapons supplies.

That would explain the large number of ‘rebel’ tanks that formerly operated in and around Aleppo. It seemed rebels frequently had armour superiority. .

I read report maybe two months ago – that Saudi intermediaries had bought a batch of approx 100 old T-55s tanks from Bulgaria earlier this year. These were to be shipped to Turkey where Turkish military engineers were to do evaluation/ repair/ cannabalism/ maintenance work prior to delivery to militants in South Turkey. The mass batch of Grad missiles that arrived in South Aleppo during last ceasefire and used to launch militant’s second failed offensive in South Aleppo were bought in Czech republic by Saudi’s. It’s been a serious multi-state logistics operation to keep this going.

As opposed to the same thing under-cover as per earlier. This is just a desperation move to open the floodgates to weaponry in his last 40 days, fortunately, the tide turned many months ago, or even a year for those that could see clear.

Just say you’re fighting terrorism and it’s all good. Let’s see if MANPADs are part of this. That will be great if we can get such weapons into the hands of the terrorists Obongo loves so much.

Opening the door to the Russian defence meeting room…

“Now are we going to shoot down damned Israeli and US combat aircraft”! ?

I left Nam just as the reality of SAMs started to intrude. Until then it was small arms that were the threat. We’ve spent a lot of time in the post-WWII period without real SAM threats to deal with. Today, it’s a very different story. Even the Serbs had some success back when against our very best.

Family member was Gunny for 3rd Marine Mike Co. 65- 69 Went in during opp Starlite. Quang Tri Province. ..Hill fights,Khe Sanh,DMZ. During my poster years at Freerepublic back 2001….Poster Aloha Ronnie Was Col Hal Moore radio man… (The Movie – We were Soldiers ) Mel Gibson The battle in the IA Drang. One poster at Freerepublic who followed on to Liberty post was Green Beret With 5th special forces. He specialized in over the wire into Laos/Cambodia Reece,Hatchet Missions and recovery of downed aircrews. 3/3 Marine Rockpile /Quang Tri Province. http://rs150.pbsrc.com/albums/s99/MERKAVAS/Airlift3.jpg?w=480&h=480&fit=clip

The Saudi and CIA were primary cause of Chechnya wars. Saudi seem to get a pass from Russia in the recent mid east wars, Israel enjoys free range too. Next to USA….the next big players in the war on terror, Are Teflon Terrorist.

I gather CIA were heavily involved in events leading to Georgia’s war over South Ossetia that caused direct Russian intervention too. It’s also now apparent the CIA transported Afghan based mujahedin into Bosnia during Bosnian war, as currently there is Bosnian trial in which Croatian ex- HVO officers are now charged over murder of captured of Serb paramilitaries, although they didn’t directly participate, rather, they were in overall command of local Bosniak forces that included these mujahedin who did the killings.

Yes….and with these Conflicts is the Roaring Lion of England Press which finds its twin Lying media in USA as demonize Serbs and anyone connected to Russia/Serbia. Bill Clinton and the UN authored genocide. The UN does nothing as Israel slaughters Gaza. Gaza Strip are terrorist. .. Hezbollah is terrorist….so flatten Lebanon…

In Canada when the British were struggling against the Native people’s for the land. They intentionally gave out and placed blankets with various contagious diseases To the natives. ..and let germs do the genocide for them. With the practice occurring in Colonial America.

Excerpt: On June 24, 1763, William Trent, a local trader, recorded in his journal that two Indian chiefs had visited the fort, urging the British to abandon the fight, but the British refused. Instead, when the Indians were ready to leave, Trent wrote: “Out of our regard for them, we gave them two Blankets and an Handkerchief out of the Small Pox Hospital. I hope it will have the desired effect.” (Colonial Germ Warfare/Harold B Gill Jr)

From the CIA backed wars against Russia/Serbia to the Colonial Era, We find agents of death about the landscape…

What a great farewell gift the Nobel peace prize laureate is giving to the people of Syria to ensure the war will be prolonged in their country for as long as possible after his departure.

What were you expecting russia from the americans? To see until when Russia stops trying and agree with the Americans. Because they are not and will never be your friend, much less your ally. Then no kind of solid and trusting agreement or cooperation must ever exist between them. Discussing about peace and on the other hand arming to the teeth their sponsors, sheer American hypocrisy as always.

Obama is a criminal who must be punished by crimes against “lesa humanity” of lybian and syrian people.