As violent attacks continue nationwide amid protests over the death of George Floyd, a viral video has emerged showing a man throwing a firecracker at a 66-year-old homeless man in Harlem, which explodes as the attacker trots off smiling.

SHOCK VIDEO: Thugs are seen throwing fireworks at what appears to be a sleeping homeless man on Malcolm X Blvd in #Harlem. #DeBlasiosNYC @NYCMayor @NYPDNews

The incident happened on MalcomX Blvd. at approximately 4 a.m. No arrests have been made as of Tuesday, while an investigation is reportedly underway. The victim was hospitalized with minor burns, according to the NY Post.

The incident is the latest in a spate of firecracker attacks, which New York Times‘ Pulitzer Prize-winning reporter, Nikole Hannah-Jones promoted a theory that “government forces” are setting off fireworks to disrupt the Black Lives Matter movement.

#DeBlasio’s New York. The cops don’t stop anymore. And frankly why should they? #DemocratCities pic.twitter.com/g9UEtAKZIU

This is incredibly irresponsible on every level. pic.twitter.com/hFSmxe8HtA

#BrooklynFireworks #NYCprotest No war zone here. I’d rather they express themselves with fireworks than guns. Real NYers know how it could really be pic.twitter.com/qj2Au6ANX6

And what’s with the left attacking homeless people?

Rioters cheer as this homeless man’s belongings are set on fire in Austin.

This is heart wrenching. pic.twitter.com/rnafp39w90

And obviously agents provocateur. False flag if I ever saw it.

those teeth were white af

Look at those rioters, burning an old homeless guy’s mattress, thinking they are strong. Shitty motherfuckers act tough on an homeless guy, the U.S police officers should learn from us how to treat those scumbgs:
https://www.youtube.com/watch?v=R6llh_fe2kY

I am willing to bet that they are tools (US police or military officers disguised as protesters) of the US government. The US government will do anything to disparage the current protest against their corrupt/brutal/tyrannic and Zionist infiltrated system.

Sure they are, the entire world is Zionist too.

You lost 6 million in WW2, cowardly b’stards that you are.

Are you proud of this ? Or just happy spreading hate= (to receive your trolling paycheck.)? From the system you work for. Any human that wishes death on any innocent human will surely get KARMA in the end.

They are not innocent, we’ve warned the SAA that if they help Iran transfer weapons to Hezbollah, then they will pay too.

The Zions play them like fiddles time and again but in the end, they too will tire and then the Zions will be driven out as they always have been all throughout history. I wonder if the Chinese will alow them to infect?

They already have and that is the problem. The old man is better off getting shot with a firecracker then with a 9 mm don’t you think?

The old man just wanted his mattress back, I didn’t see any police officers there to protect him from the crowd. That is their job, and if they have to use firearm then do it.

No perhaps in Nazi/Zionist Israel but Here in a free country the police should not be armed with lethal weapons. We have a constitution that protects most of our inalienable rights.

Your constitution doesn’t worth shit when people can do whatever they want and face no punishment. Let me know how it ends for you, I know here it works just fine.

Most US BLM protesters support ABORTION RIGHTS, unlike most Palestinians, so it’s apples and oranges.

In theory according to 2A, all Americans should have the right to self defence including carrying lethal weapons. Police shouldnt be denied from their exercising their own right of self-defence, either, like any other citizen.

IMO, police should be nothing more than citizens with reasonable police powers, held to the same standards as everyone else.

Surely you can see the problem if police are denied this basic right….

You made a good point that I was not seeing. Thank you for that, you are correct.

The attackers were cops, so they were obviously there. I think a real protester stamped out the fire.

Ya, they’re criminals and should be arrested and prosecuted. However the police using excessive force and killing people unnecessarily like you do is what is causing the riots. If we didn’t have 6 million Jews here including 3 on the Supreme Court it’s unlikely that we’d have the problem to the extent that we do.

I bet you the homeless man was white.

And the attacker was an undercover cop, which explains why he wasn’t caught.

Ashkenazi jews have some of the highest rates of serious mental illness, which explains your posts.

THE TIME HAS COME AMERICA TO BURN AS NEVER BEFORE

Assad must stay
Reply to  World_Eye

karma for all the countries they destroyed

It’s probably time to forget about building a wall on the Mexico border and instead build walls around every major municipality – aka shithole – in the USA to keep this sort of garbage contained, since the mayors of these shitholes are not only unwilling to resist the Mob, but in many cases, are actively conspiring with the Mob.

We have the deepwater ports and heavy transport hubs, without which grain and fuel can’t be shipped, so be my guest!

Where do you think the grain and fuel comes from, genius?

Shitty cityholes exist at the pleasure of ‘flyover country’, Shlomo. You will probably find that out soon enough.

US society is totally fucked lmao

It’s not about society, I think. Most of Americans are hard working people while there are black sheep. What we are witnessing now in USA is another phase of plan of deconstruction of national governments worldwide. The world order is transforming from capitalism to digitalism. In the end of transformation, most powerful and wealthy people would be those who controls information and not those who controls capital like it was last 5 centuries before. Now they need to make people to believe in inefficiency of hierarchical government while offering the alternative based on false self organization of people using digital platforms they control. You can witness this process even now when crowd is organized by tweets or FB publications and Democratic mayors or governors direct sabotage of work of all level authorities.

Not quite. USSR was one of the first signs of the capitalism decline. Capitalism as another stage of the World development. Like slavery, feudalism or monarchism. Every political system has it’s life time. The capitalistic system is one step from the grave now. What is upcoming will be worse. BTW every world system change was always accompanied by disasters. Like 30 years war or Black Death.

What does that have to do with anything? Its still the ghost striking back

It’s not ghost but long term strategy were USSR was one of the development stages. But if you want to call it ghost – why not? 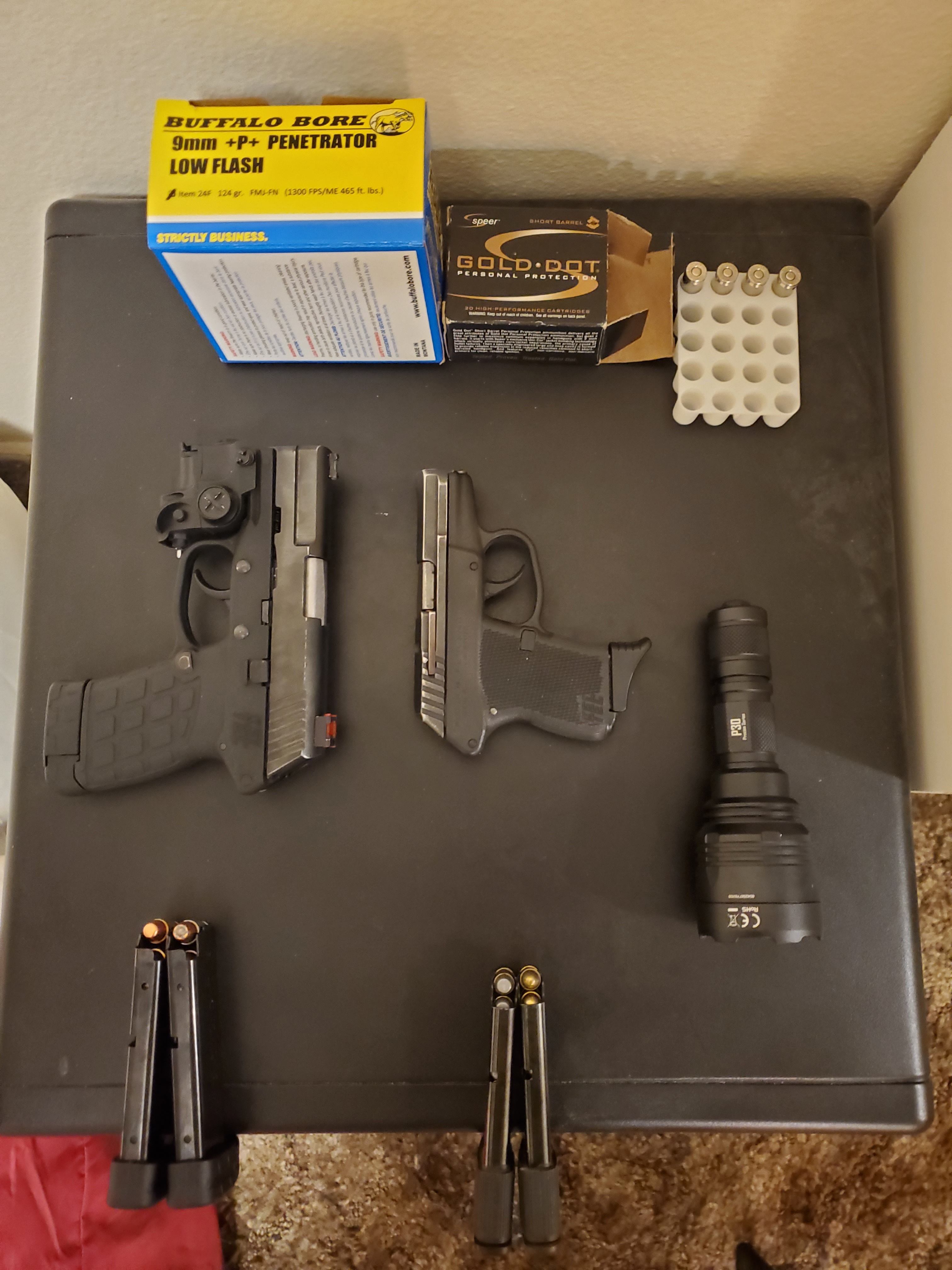 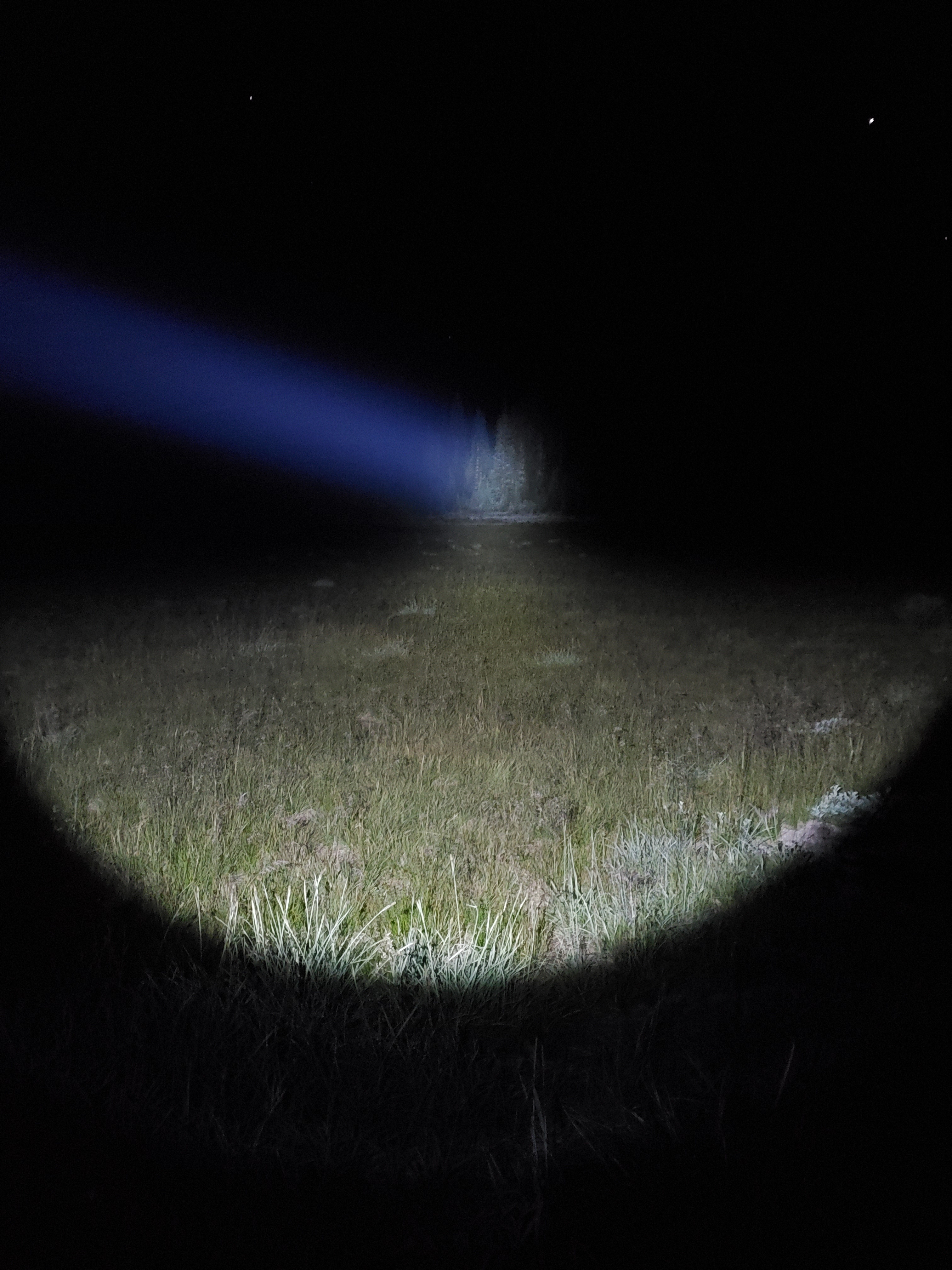 BLM is a heath speach.

The protest camp and zone is expanding by an increased number of tents and setting up new barricades another block down the street from the previous boundries. 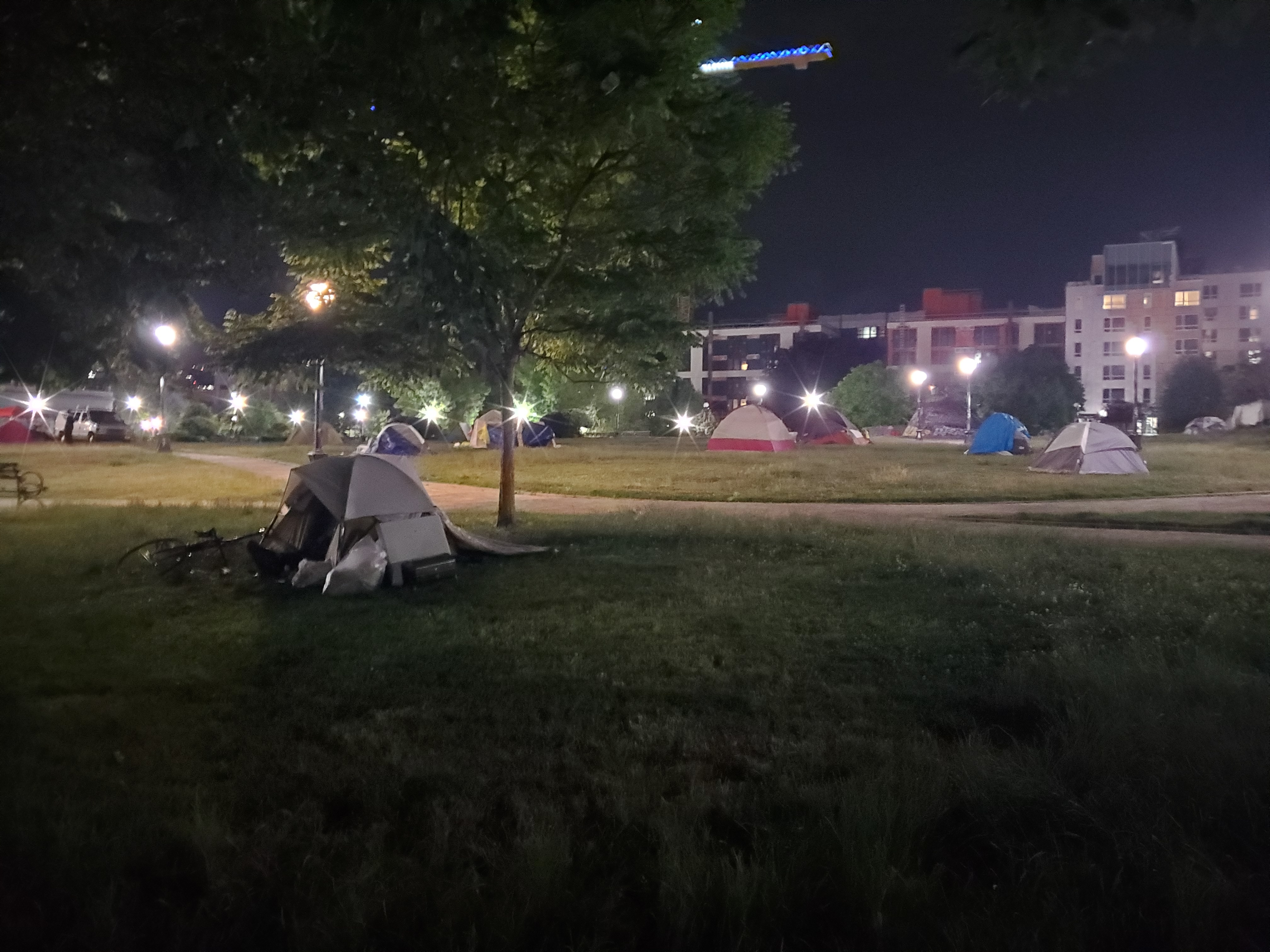 I left the 9mm and mags in the car and just brought the 32. Without a shoulder rig it was too much to carry both guns, phone, wallet, keys, flashlight, etc. comfortably with summer clothes and a light jacket.

There doesn’t appear to be any attempt to implement a curfew. There are a lot of people here. 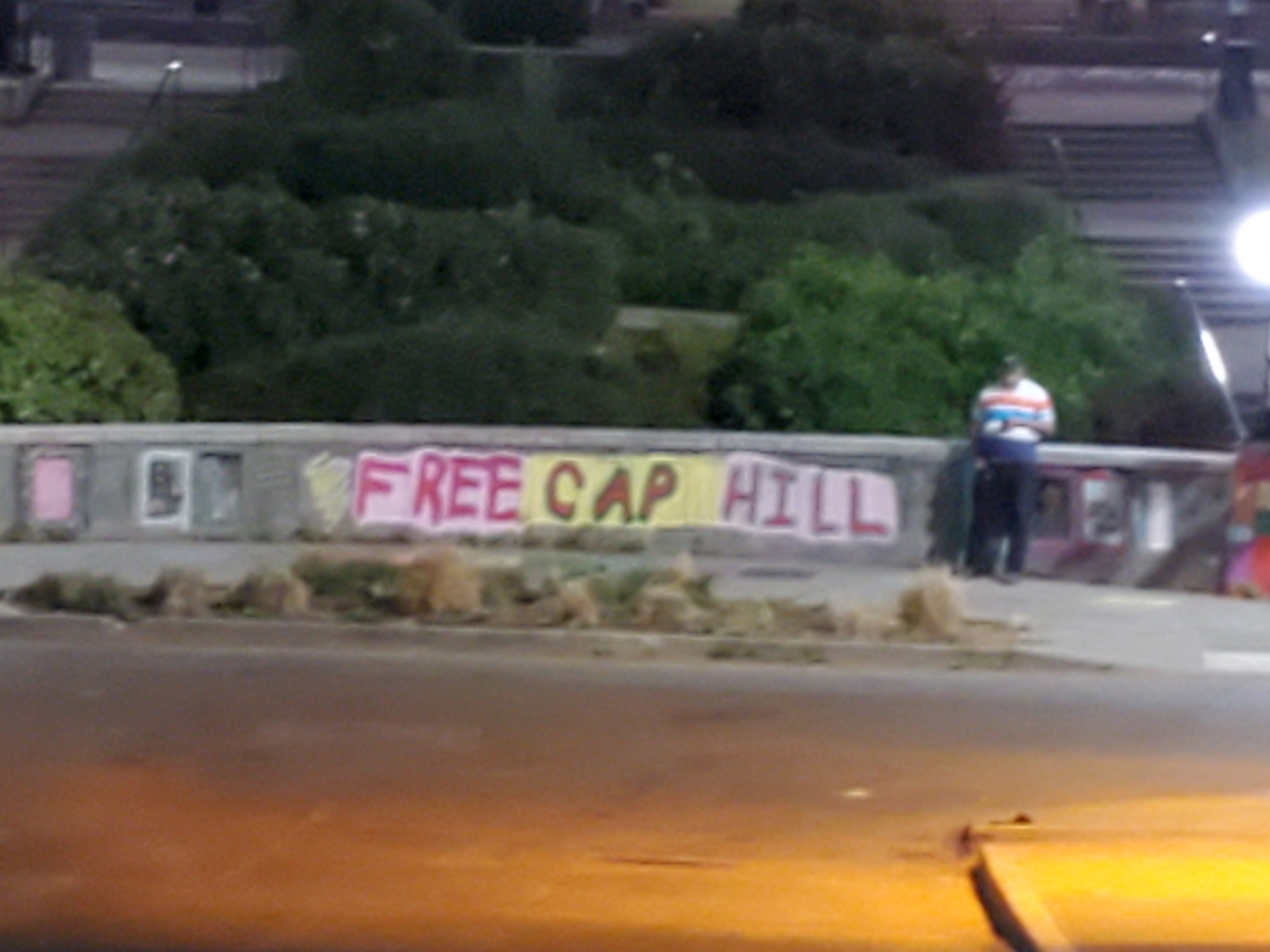 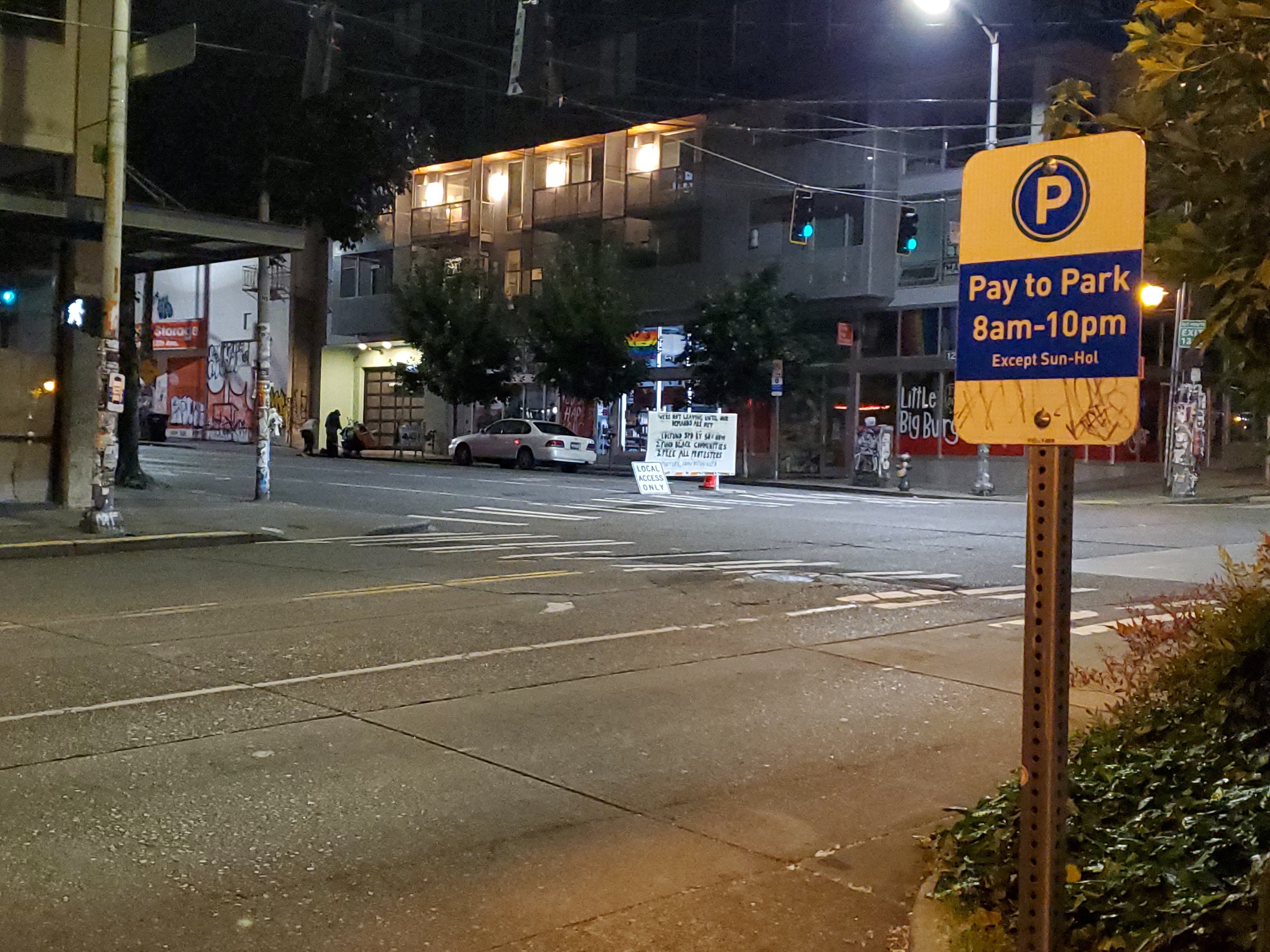 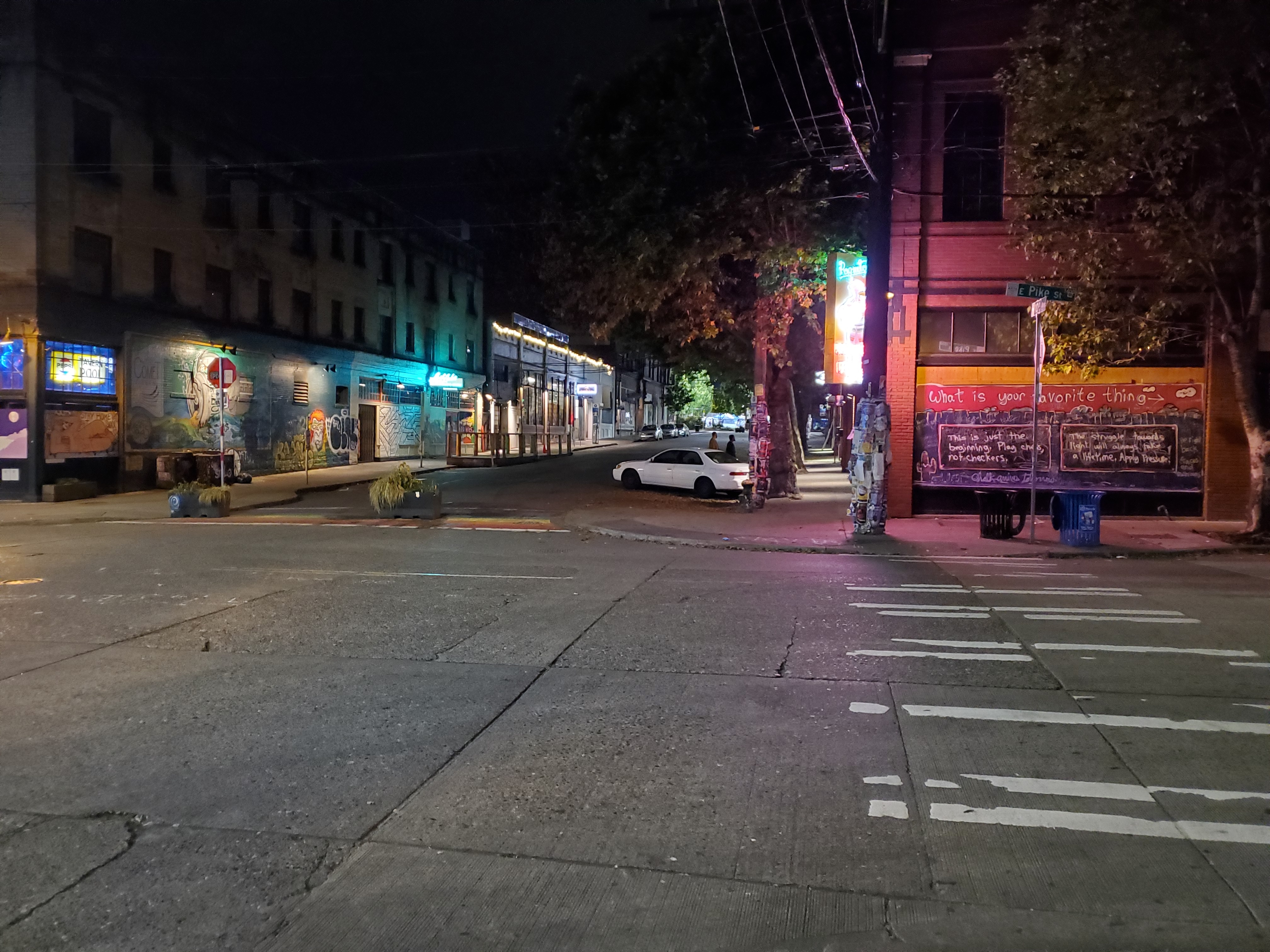 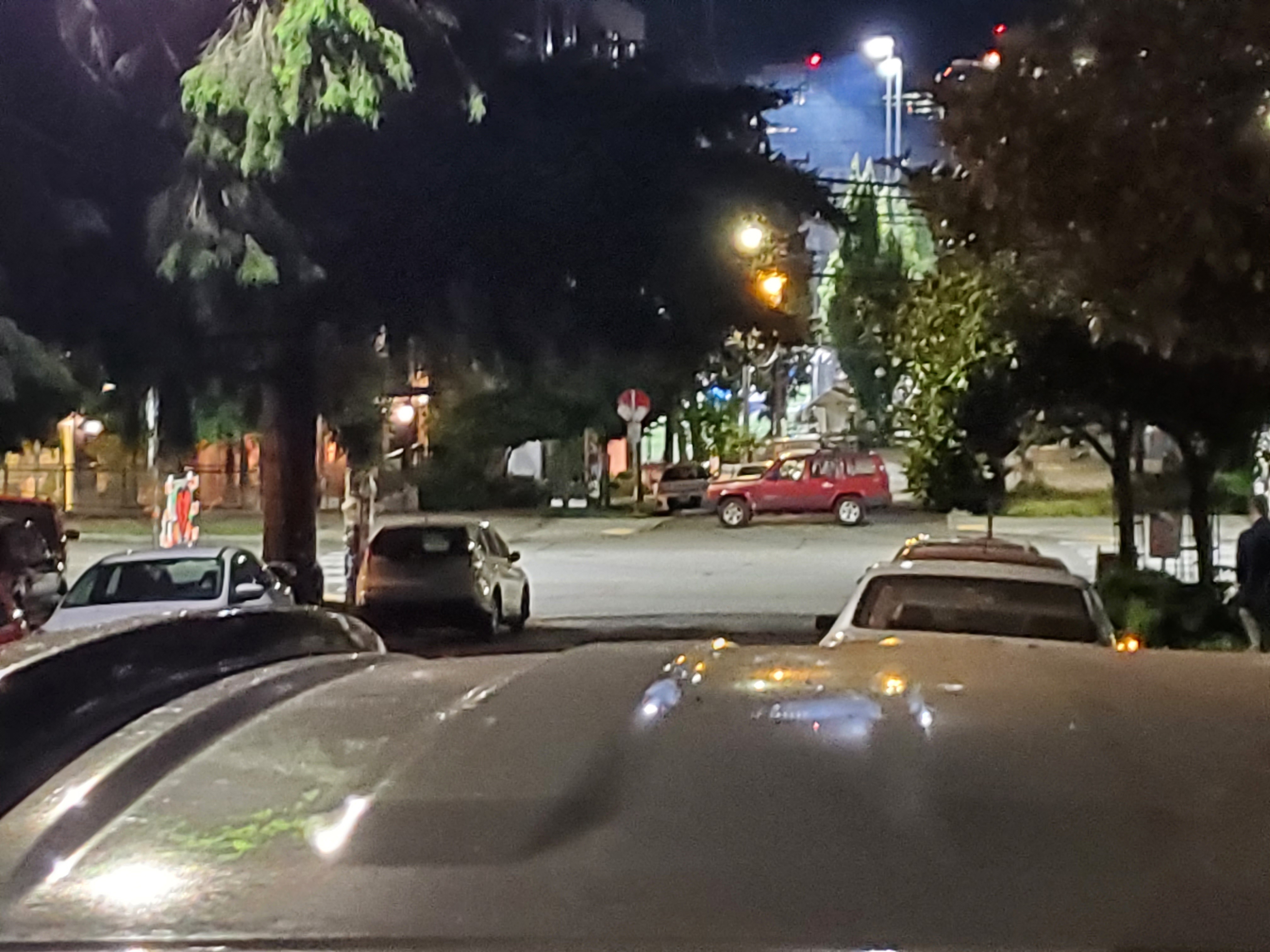 The lights have been turned on at the sportsfield. 5 or 6 blocks are being added in various stages of expansion. There is an armed man open carrying walking around. I didn’t take a picture to avoid initiating a confrontation. Though it was in front of the police station. So I’m sure that it’s on camera. 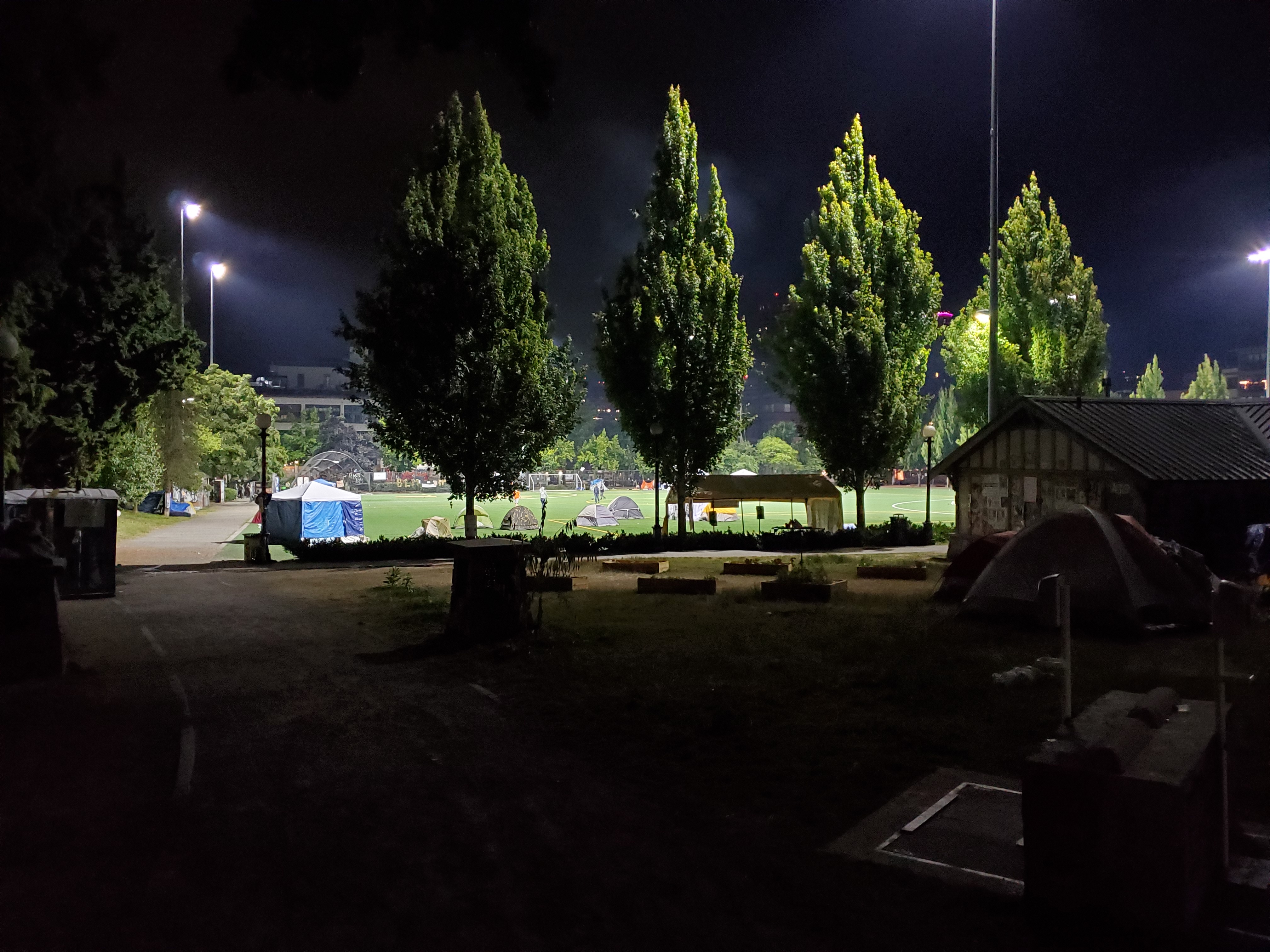 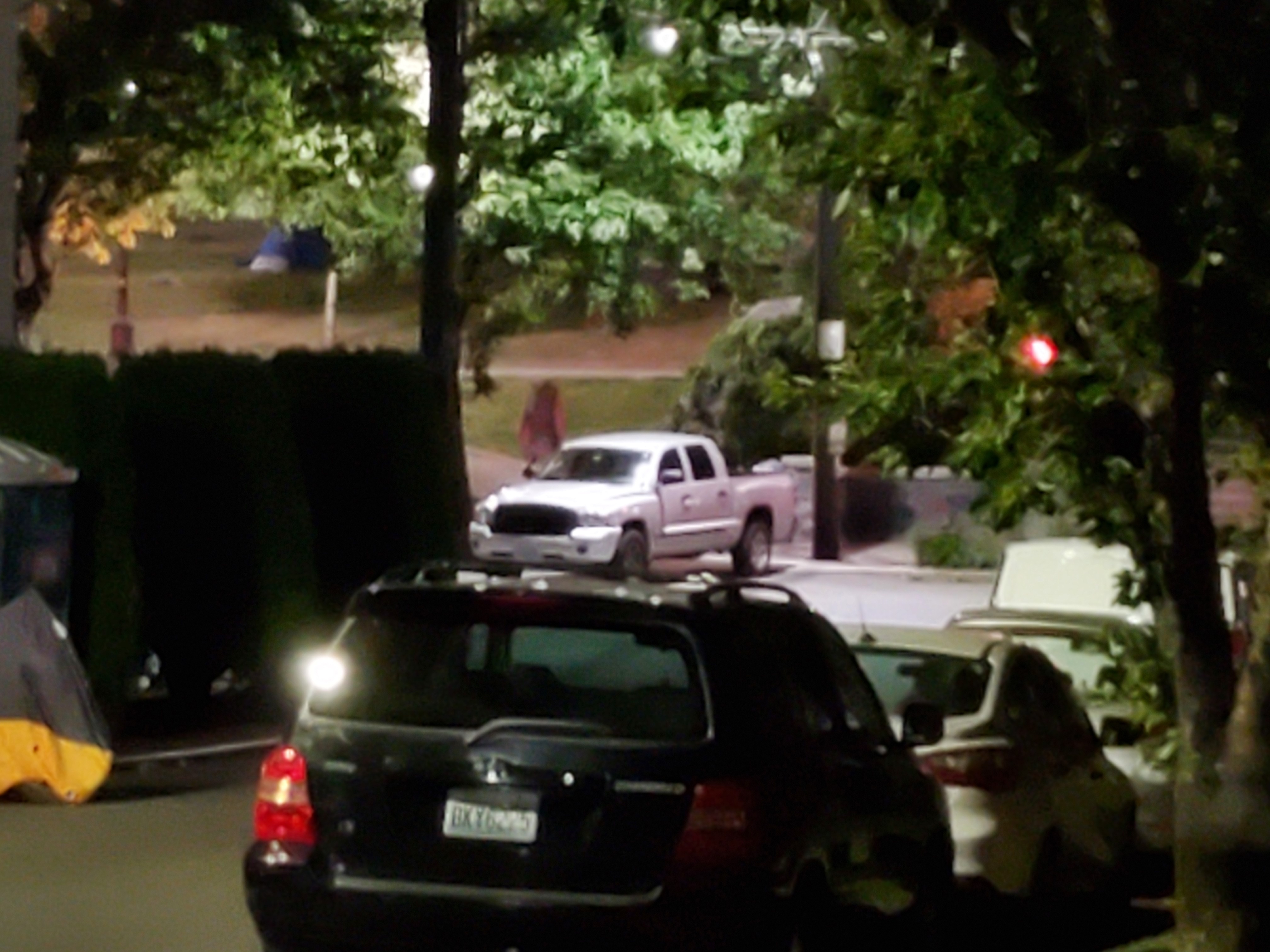 Mayor Durkan is a fraud and disaster. She knows that her plan to get the CHOP zone protesters to voluntarily disband is a non solution can kicking exercise. They won’t even meet to talk about ending the protest.

She and Governor Islee are planning to drag this debacle out for as long as they’re allowed to get away with it. They both need to be removed from office and replaced with people who’ll do their jobs properly and not run fake scamdemics destroying the economy and sedition zone dystopia operations ushering in lawlessness with police no go zones run by anarchists vandalizing public and private property severely damaging people’s businesses and lives.