At least 107 Turkish-backed Syrian militants have been killed while fighting for Azerbaijan in the disputed region of Nagorno-Karabakh, the Syrian Observatory for Human Rights (SOHR) reported on October 9.

According to the London-based monitoring group, more than 26 Syrian militants were killed by Armenian forces in the last 48 hours only.

The total number of Syrian militants supporting the Azerbaijani attack on Nagorno-Karabakh is no less than 1,450. At least 250 were transported by Turkey to the disputed region’s frontlines last week.

Despite the ever increasing international pressure and mounting losses, Turkey is still recruiting Syrian militants to fight in Nagorno-Karabakh.

“More than 400 fighters from the Sultan Murad Division, the Hamza Division and other factions, are preparing to be transferred by the Turkish government to Azerbaijan in the next few hours and days,” the SOHR said in its report.

A day earlier, Syrian activists leaked a video revealing how Turkey was using radical rhetoric to recruit militants for the battle in Nagorno-Karabakh.

Turkey’s involvement in the attack on Nagorno-Karabakh appears to be larger than was originally thought. Recently, it was confirmed that Ankara deployed F-16 fighter jets in Azerbaijan prior to the attack.

PICS OR IT DIDN’T HAPPEN:))

There are UN resolutions demanding the Turks to end their illegal occupation of Cyprus yet both America and Russia sell or give strategic weapons to Turkey.

There are UN resolutions demanding that Israel dismantle its illegal settlements which were enabled by the West to start with by giving Khazars (Jews from Europe who are Turkic people who adopted Judaism) Palestinian lands that don’t belong to them, based on claims that could only be made by Canaanites that no longer exist. Khazars are not even Hebrews (Jews) that no longer exist either. Khazars (which are erroneously called Jews/Hebrews etc.) are *Turks* who adopted Judaism emphasizing its most hideous Talmudic tradition, which is both secular and pseudo-religious. (It’s common knowledge that rabbis themselves mock the Old Testament/Torah as being mere children’s stories for the gullible, saying that God Himself consults the Talmud to learn what He doesn’t know. The Torah was written by rabbis who are supposed to have been created by God!)

…to this end Declares that:…

2. All peoples have the right to self-determination; by virtue of that right they freely determine their political status and freely pursue their economic, social and cultural development…

4. All armed action or repressive measures of all kinds directed against dependent peoples shall cease in order to enable them to exercise peacefully and freely their right to complete independence, and the integrity of their national territory shall be respected.

5. Immediate steps shall be taken, in Trust and Non-Self-Governing Territories or all other territories which have not yet attained independence, to transfer all powers to the peoples of those territories, without any conditions or reservations, in accordance with their freely expressed will and desire, without any distinction as to race, creed or colour, in order to enable them to enjoy complete independence and freedom.

The UN is contradicting itself by demanding that Armenians vacate their own lands or accept to be genocided again by the Turks.

Don’t stuck your long Greeko nose into our business, go handle your own problems. Israel will do what is best for Israel, and we are not going anywhere.

Oh, you are going somewhere. That somewhere is the dustbin of history. Your frantic attempts to “normalise relations” is just proof that even you recognise that the end of your parasitic host the Imperialist States of Amerikastan is close, and when it implodes, your protection will end. (And spare me any talk of your “Samson option”. Zios, like cockroaches, are survivors. They’ll seep into cracks rather than blow themselves up.)

Come find out yourself then.

So you can spare time in between stealing Palestinian land for illegal settlements?

Let me write it in a language you understand, you filthy Jihadist:
al mawt ila aljihadyn, ana bisq alaykum, aljirdhan.

Since I can’t speak Arabic, that was a waste of your time, zio.

Why the Jihadi in your name then? are you a little bastard who wished he were a Jihadi and you failed to do it? and you should know I do know Arabic, since I am a true Middle Eastern. Bitch.

You obviously don’t know the meaning of “jihadi”.

And you’re not a “Middle eastern” (West Asian). As a zio, you’re an invader and illegal occupier. A criminal, in other words.

Also, I’ll bet I can speak more languages than you. So what?

So don’t mind your nose into our business, no one has asked your opinion.

Really? You racist fascist zioscum poke *your* illegal noses into everyone’s business. The entire world is affected by your evil. And you claim we shouldn’t have an opinion about you?

What the fk you on about long nose zeigheir isis cretin!

While in Syria it is universally recognized that these troglodytes are not Syrians but foreigners, now that they go to do damage abroad they magically become Syrians, Coventry should stop reporting the fake news of MI6.

There are a substantial number who are not foreigners. Most of them are from the Islamicised Sunni villages. Many have been paid from the start to join the headchoppers and have never been anything but pure mercs.

What some losers. They are paid by their UK masters. 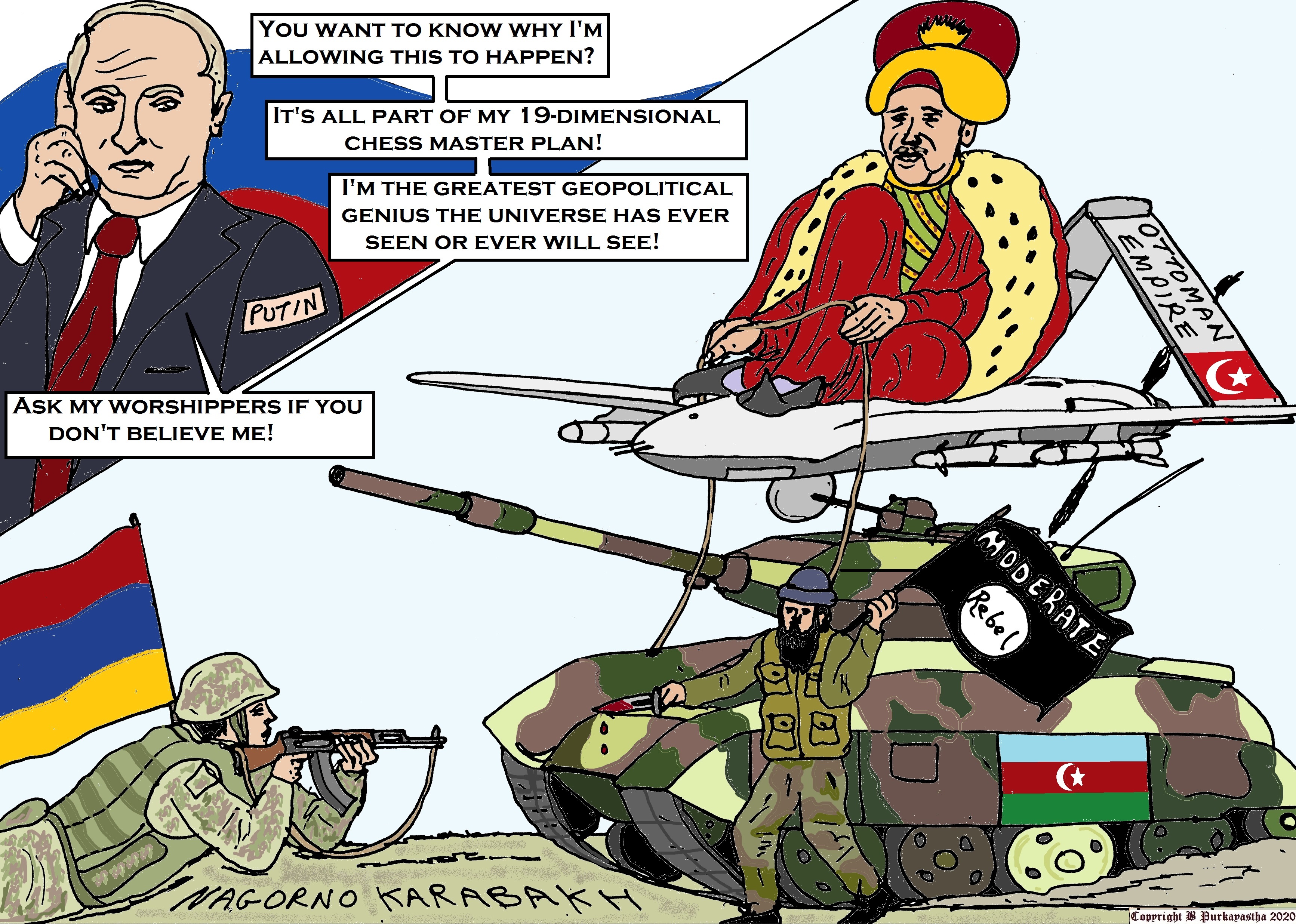 That’s one hell of a funny political cartoon, crude but effective.

Go ahead and share it if you want. It’s by me.

I don’t think you’ll get a job with South Front but your cartoon is exactly what a clever political cartoon should be, well done.

Version without dialogue, for anyone who wants to add their own captions: 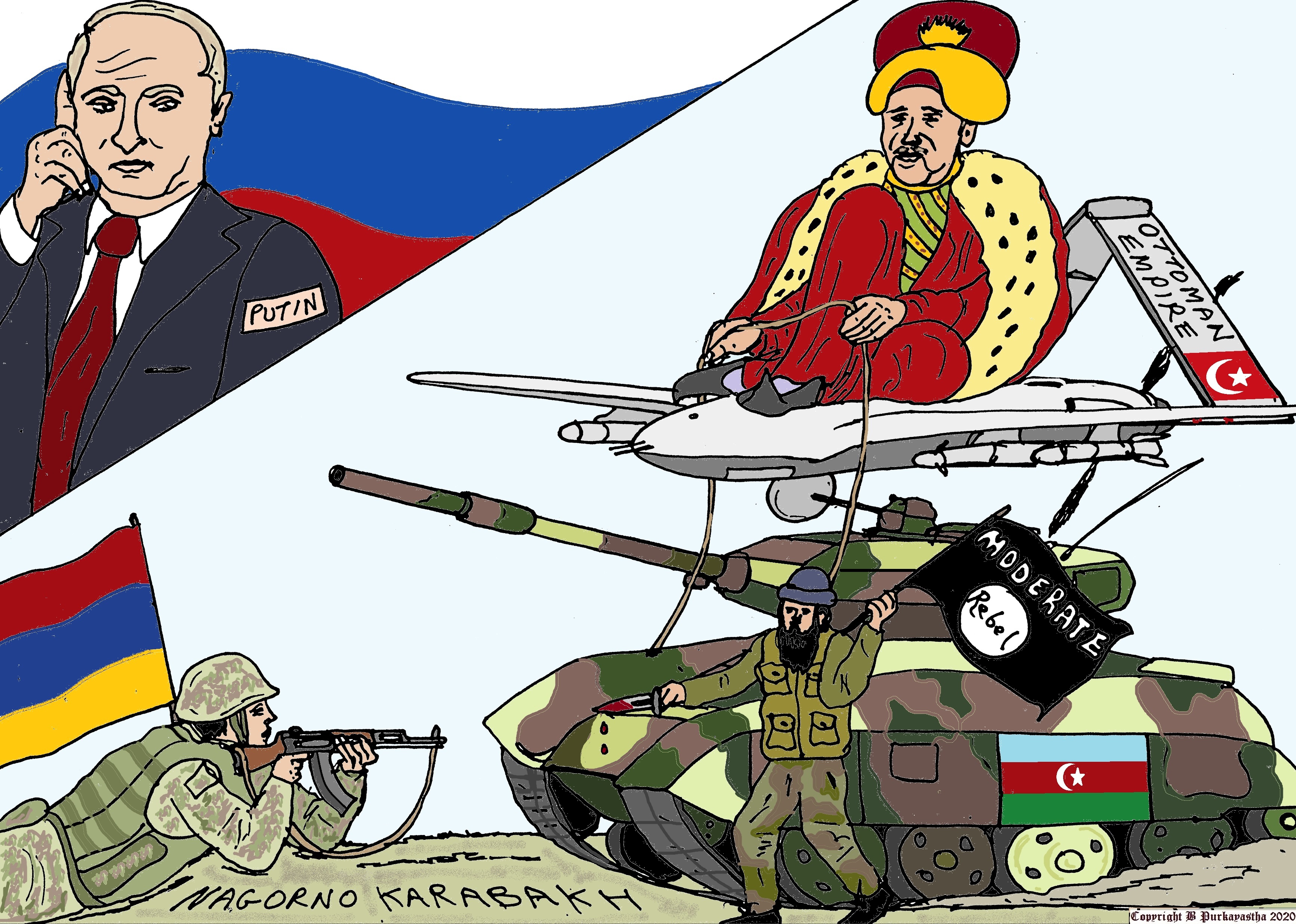 All the foreign Jihadists that went to Syria now need money and an easy way to get their families out before the political process begins.
They have to get out and they can’t do it legally, and they can’t just go to Turkey just across the border either because Erdogan won’t let them, but he will give them some money and a plane trip out if they do him just one little favour before they go home.
I always wondered how the hell Erdogan was going to get all the foreign Jihadists out of Syria when he needed to, he wouldn’t let them into Turkey so they appeared to be trapped in northern Syria with no escape route out, but now I know how they’re going to get out, that’s if they survive the payment process, LOL.
Erdogan treats his friends and allies alike, everyone’s expendable, he’s only loyal to his own ambitions.

All these pro Turkish forces are going to Libya and Azerbaijan to fight against pro Russian forces, that means Turkey confronts Russian interests with [proxy] military force in 3 different countries now.
So who’s next, Chechnya seems a very likely candidate for Erdogan, there’s plenty of Muslim Brotherhood support there, despite the fact the Russian strongman’s clamping down on them with an iron fist, the same way he did the Russians when he used to kill Russians for the Muslim Brotherhood, before he switched to Russia’s side of course and started killing his old allies for the Russians, so there’s definitely fertile ground there for Erdogan and the Muslim Brotherhood if they want to start even more trouble for Russia.