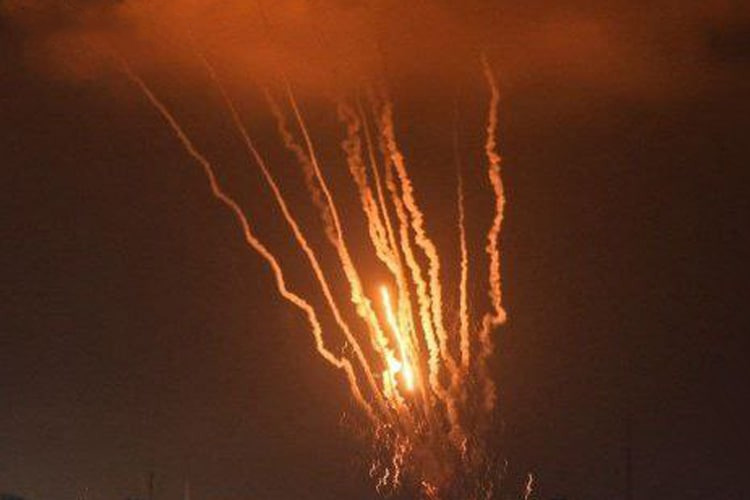 The number of rockets which have been fired by the al-Quds Brigades, the military wing of the Palestinian Islamic Jihad (PIJ), since the start of Israel’s Operation Breaking Dawn on August 5 has exceeded 261, according to the Israeli Defense Forces (IDF).

The IDF claimed that Iron Dome systems had successfully intercepted 95% of rockets that were heading towards populated areas.

Despite an increase in Israeli strikes on Gaza, the al-Quds Brigades escalated its rockets attacks on August 6. The faction targeted several towns and cities in southern and central Israel, including Tel Aviv. Footage of some of the recent attack were released.

The Magen David Adom, Israel’s main emergency service, said it has evacuated 21 people to hospitals, two lightly wounded from shrapnel, 13 after falling while running to shelter and six for anxiety, since the start of Operation Breaking Dawn.

The results of the Israeli strikes on Gaza were more severe. According to the most recent update by the Health Ministry in the enclave, 15 people, including a five-year-old girl and a 79-year-old woman, have been killed, so far. More than 140 others were wounded.

The IDF said it launched Operation Breaking Dawn following threats by the PIJ, whose military wing has been very active in the West Bank.

Israel may be planning to further escalate its operation. During a visit to the Southern Command, Chief of General Staff of the IDF Lieutenant General Aviv Kohavi said that Israel will strike the PIJ in the Gaza Strip, West Bank and other areas.

Egypt is currently making efforts to end the Israeli operation. However, both the IDF and the PIJ are not reportedly ready yet to cease fire.

Palestinians knew that their casualties would quickly increase in numbers including the lost of housing accommodations but no one could stop them expressing their grief and anger towards the brutal predator.. These skirmishes would cease once the prey had outpoured their emotions and adrenaline levels settled down.

Will hezb get involved?

Iran said yesterday Hezbollah is going to hit the final blow. There’s rumours that israel is planning on going for Hezbollah, thats why Israel called up reserves, so Hezbollah has all its units ready. Another way Hezbollah will get involved is the gas conflict which negotiations are done in less then a month, if it’s not in Lebanon favour, they’re going to war.

If that happens, the US and Israel will order Egypt to fight Hezbollah.

If that happens, Egypt will collapse from the inside as Iran gets directly involved.

Egyptians in general are incompetent at almost everything they do …

Hope they get rid of that cancer called Hezbollah from our country once and for all. Maybe this time with Israel from outside and Lebanese from inside will fuck these Iranian dogs out.

Hezbollah is the only reason you still have a country.

LOOOL We are worst than Gaza, Gaza still gets more electricity and water than we do here, they even have banks and can withdraw their money! come live here and see for yourself, in fact Lebanon was never a fucking country to begin with, I consider it a whore house and a good one at that, The day it became a whorehouse is when they took the so called independence form the French. I’d rather sell this shithole to the UAE and US and build a life than fight this hypocritical co-called unwinnable holy war of these brainless brainwashed fucks who can’t wait to die and rather live in shitholes sucking Nasrallah’s dick all day long.

I bet you love zionist cock up your ass you little bitch.

Aww you think you’re so tough don’t you Jew hating fag? What’s the matter? Sad because mommy and daddy are dead and you have no-one to hold your hand as you cry in the middle of the night and end up wetting the bed?!

You little fucking snot rag I would tear you asunder. You’re jew whore of a mother sucks cocks for shekels.

I bet you like sucking cocks more though, don’t you fag? It must be the only enjoyment you get out of your pathetic, miserable Jew hating life?

The long catalogue of ongoing crimes committed by chosenites were normalised by their avid supporters from the west who keeps feeding the atrocities of IDF. I do wonder what’s being kept in the synagogue to compell the western power to comply whatsoever small hats desired. We’re they all compromised?

There are reports that the zionists are planning an offensive against Lebanon.

Nobody cares about brown people.

Joe Bidet Is A Senile Pedo
Reply to  Bal- baleg

What?, did you really expect the Jew controlled UN & western MSM to condemn the actions of the kike scum? Muh 6 gorillion holocaust pass excuses them from any expectation of human decency apparently!

Al-Sisi said he was using their contacts both with Palestinians and Israelis “to return calm” (لإعادة الهدوء. That’s a slab in the face of the Palestinians as he’s basically saying “let yourselves be killed and shut up”. This recent assassination is the first for a long time. It’s possible that it has to do with Israel’s set-back concerning the Karish gas field. Hizbullah played an important part here and it’s possible, that they’re one of the targets. Note that this assassination comes in the month of Muharram, on Monday, it’s the day of Ashura, where Shiites especially morn the killing of Imam Hussein, the son of Ali Ibn Abi Talib. The timing of Israel’s attacks is hardly coincidental. The leader of IJ said there would be no more ceasefire after this assassination and attack.

The Egyptians are cowards in general. Their national balls were cut off when Nasser was killed.

Al sisi is a pirce of shit

The criminal state of Israel is at it again. They count their 5 anxiety stricken “victims” while discounting the slaughter and maiming of 155 people on the Palestinian side. The racists in Israel don’t consider the Palestinians or anyone else’s life on the planet worth anything. To them whether Palestinian or not, we are all cattle only born to serve them. To think that our governments are all owned by the ZioNazis.

It is perfectly fine for me that Jews, Muslims and other Islamists kill each other.

It is perfectly fine for me when white supremacists butcher each other. WW1, WW2 was a service to the world, it almost ended white colonialism.

What we need in Europe is one more white man’s war to bring the European race to extinction so the rest of us can live in peace.

A jew said it. Therefore it is a lie.

The jew has been lying since one of them claimed to be the son of god.