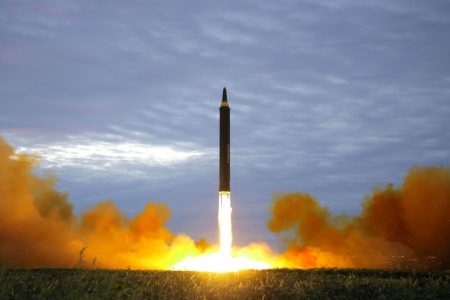 A missile is launched during a long and medium-range ballistic rocket launch drill in this photo released by North Korea’s Korean Central News Agency in Pyongyang on August 30, 2017.

Agreement paves the way for nuclear proliferation in Asia-Pacific

Apparently, the creation of the AUKUS group is the new big topic of debate on the geopolitical scenario. While the main focus is on China, which is undoubtedly the main target of the American initiative, the North Korean issue cannot be neglected. North Korea is among the countries that can be most affected by AUKUS’ actions, both in the direct sense of tensions in the Asian space, and in the indirect sense, considering that what hits China affects Korea collaterally, as it is a country extremely dependent on Beijing.

Pyongyang severely criticized the creation of the AUKUS as a dangerous measure that threatens international peace and regional security by promoting a new arms race in the nuclear sector. In a recent statement to the Korean Central News Agency, a spokesman for the North Korean ministerial foreign news section, said that the new military pact violates the strategic balance in the Asia-Pacific region. These were his words: “The US has recently struck the trilateral security partnership with Britain and Australia and decided to transfer the technology of building a nuclear-powered submarine to Australia. These are extremely undesirable and dangerous acts which will upset the strategic balance in the Asia-Pacific region and trigger off a chain of nuclear arms race (…) it is quite natural that neighboring countries including China condemned these actions as irresponsible ones”. In another moment, he added that Pyongyang condemns the “double-dealing attitude” of the US, also calling it “the chief culprit toppling the international nuclear non-proliferation system”.

The spokesperson’s words sound very realistic. Indeed, by providing advanced weaponry to Canberra, Washington and London are launching a new agent in the military disputes of the Asia-Pacific region, which does not seem prudent from any point of view. In a world increasingly concerned with peacekeeping, inserting new states into military tensions and arms races in which they were not present before appears to be irresponsible and irresponsible, with results that can be disastrous for all the sides involved.

For nations in a weaker military situation, this is even more significant. While a direct confrontation between the US or UK and China is virtually impossible to happen, considering the high destructive power that would result from such a war, it is possible for other nations, with less military potential, to face proxy wars representing the interests of each of the superpowers indirectly involved. The biggest representative of Chinese interests in that region is precisely North Korea, which, despite not having a large military force, has nuclear weapons, which makes it stronger than most of the Western allies in the Pacific. However, now, arming Australia with nuclear submarines, the West paves the way for a new arms race. This could even result in the proliferation of nuclear weapons in the region, which would make Australia in equivalent forces with Korea. Historically, both nations have strained relations because Australia has always prioritized serving the interests of its Western allies. Since 2013, both countries do not have diplomatic relations. However, a conflict between these nations was not on the horizon for Korean strategists, who have always regarded Seoul and Tokyo as the greatest threats. Canberra is now included in Korea’s list of frontal enemies, as it will soon be orbiting atomic submarines and operating dangerous military maneuvers in that region.

The issue of nuclear weapons and submarines, however, while very relevant, is not the only problem involved in this case. The AUKUS is an extremely broad military cooperation agreement, which guarantees the transfer of military technology to Australia in various sectors. In fact, for an “unknown” reason the US and UK want to equip Australia and make it ready for armed confrontations. Of course, China is not the only target in this situation. British Prime Minister Boris Johnson recently emphasized that the AUKUS alliance is not aimed at China or any specific country. In practice, this does not mean that Beijing is not the target, but that there are multiple targets in addition to Beijing – these other targets are precisely the governments that represent Chinese interests, such as North Korea.

So, the scenario that is developing is this: the US and UK are stepping up their siege strategy against China by arming their Asia-Pacific allies for possible armed conflicts. This transfer of military power includes nuclear technology, which threatens not only world peace but nuclear security as well. Evidently, there is a flagrant disregard for the norms of non-proliferation of nuclear weapons. Although nuclear submarines are not “weapons” in the common sense of the term (usually referring only to missiles), their use threatens security as it encourages a race – and as these submarines are used to launch nuclear missiles. In fact, if new countries start using nuclear technology for military purposes, all security will be threatened, and this is why Washington and London should respond for this and sanctions should be imposed on these countries for putting peace at risk.

Good luck to AUKUS. They are gonna implode before all is said and done about this. What US will turn out is anyone’s guess in next 10 years. That AUKUS amounts to your daily squats in your local gym down the road with little britain similar to south korea in population and australia with a population of mere 24 million, the smallest country in asia. It is just a media stunt and even south front is helping their stunt. They are doing this thing out of desperation. Good luck again to AUKUS and they need a lot of it.

They are surely puffing themselves up to appear bigger but they are really hollow.