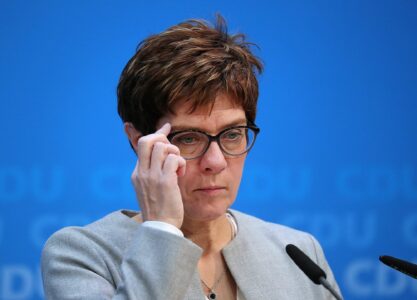 Although she is only temporarily in office due to the upcoming change of government, the German minister of defence, Annegret Kramp-Karrenbauer, is tightening the escalation screw against Russia even further.

On October 21, on the side-lines of the NATO summit in Brussels, she gave an interview to Deutschlandfunk radio in which she threatened Russia with the use of nuclear weapons if the country did not bow to NATO’s guidelines. The Baltic region and the Black Sea were specifically named as possible war targets.

The minister is undoubtedly also keeping an eye on the 20 nuclear weapons that are being stored at the Büchel air base in Rhineland-Palatinate, Germany. Although it is not officially a nuclear power, these American nuclear weapons are available to Germany in the event of war and are to be dropped over Russia by Bundeswehr aircraft.

Although, on October 24, there was opposition from Rolf Mützenich, a high representative of the future government coalition, it was only half-hearted and even turned into the accusation that Russia, for its part, was threatening NATO. In the past all parties of this new coalition have supported the German policy of confrontation unconditionally or even called for it to be tightened.

German dreams of war against Russia have already brought the world to the edge of the abyss. A world war with nuclear weapons, however, would be a step beyond.

Germany again? Really? Two loses in a row and they want more

maybe she thinks the third is the last one🤣

We all know it’s the Jews that do this to Germany every time thus far.

Frankly, I doubt it, considering AKK and others of her ilk are USian puppets that take orders from Washington/London and act against their own country’s long-term interests.

Nobody wants more. This is just one incompetent political puppet trying to piss of everybody off while leaving office after a failed election. If Germany wants to hurt Russia, they simply would stop the pipeline. But they don’t. What they say and what they do is not the same.

She is mentally handicapped, just look at her. Anyways if they dare to attack Russia there will be a nice big parking lot between Poland and France.

That is, will there still be a Poland?

All of Europe is under Judeo-American control and they are in turn controlled by the Unholy See in Rome, the evil of all evils, The Cupola. Ironically, the Cupola, is another term used to define the Mafia or organized crimed in Italy.

Only in your dreams. Yeah, mafia is running Europe :-)

Who created the CIA cuckhead??? Who can blackmail and threaten like no other criminal organization? And another one, if it weren’t the Mafia, Gen. Patton and the Americunts would still be in Tunisia waiting to invade Sicily. Every world leader, including the Zionazis, like Nutty yoyo go to the Cupola to kiss the Capo Mafia Bergoglio’s ring finger. That’s a fact asswipe. For all I’m concerned, the Poop, can kiss my ass, he and his pedophile ring of priests, nuns, monks, friars and assorted scum.

What an odd play given how badly Germany needs Russian oil. I wonder if this is Germany’s way of saying we’re going to buy US nukes. If true, then the NPT is dead.

what kind of joke is this one? Really she thinks her country is able to attack the russians for third time? it is time to take her at an asylum

Cromwell
Reply to  yo666

Last time the Nazis had two million troops for Barbarossa,what would they use this time the boy scouts?

something wrong with posting in this site

If we can dream it, we can do it. This time will be the winner time and Russia cant do a shit about it, and you know it.

Germany can’t even defend their own borders from criminals. Their army is a joke. Half of their hardware is unusable. Moral is at the bottom. Most people don’t love their country anymore. It is filled with asylum seekers and more than 1 Million educated people leave the country every year. They are already finished. No need for war.

What would be the reason to attack Russia other than insanity?stop dreaming such foolish dreams.

She is trying to look like a legitimate leader, saying things that should get eespect from German people. Let’s be honest here. Russia probobly laughed at these comments… first of all let’s just honestly go through this logically here.

How is she going to get those nukes past turkey and how is Russia not going to see 20 nukes I presume big into the black sea and not notice, let alone not instantly respond with disabling said transport ship like last time?

She isn’t going to escalate jack didly, the germans won’t fight the Russians they are as tired of this war drum garbage as the Americans and well the Ukrainians. No one’s buying it… there is that a good logical set of words ? 20 nukes… what about Poland? Yhe I’m sure the polish are going to just sit back and listen to 2 countries threatening to hurl nukes over their heads like it was some kind of a cartoon and they are some sitting duck quickly looking to the left and to the right making funny faces…. uhuh… she’s a joke she’s another blm leader who’s gonna get a nice house and disapear.

Place her in a cage in a zoo in Hiroshima where she can explain how wonderful nuclear weapons are to the people that live and visit there. She should be dismissed from her position for threatening to Wage Aggressive War which is what Iraq and Saddam actually went on trial for. But first the German government should request a full Psychological Evaluation of her.

Yes and she can be fed on radioactive Bratwurst in the Zoo.

She was/ still is totally incompetent as a politician, so nobody put any weight into what she is saying. Besides her party lost the election and now they try to piss of everybody. Germany again proved to be a total tool against Russia. But they are no match in any way thinkable. NATO is really, really pissed, that Russia has developed weapons the NATO cannot do anything about. Russia warned NATO many years ago and was ignored, when NATO put missiles and radar station in Europe. And now they face reality and see that Russia kept their promise and did respond to their stupid ans selfish actions. It will be very expensive to catch up to Russia’s level and probably impossible anyway. They will wait until the US will sell them more crap to “help”. Russia doesn’t need to fire a single missile at Europe anyway to win. They just stop delivering gas and Europe will collapse next winter for sure.

Any country attacking China, Russia or Iran will stop existing, my money is on Turkey and Israel first.

Looks like some Nazis didn’t get the message last time,maybe it will take Berlin reduced to rubble again.

Go and wash the dishes.

There was a time when I supported the moves to bring in women in important government jobs but now, it’s obviously bad moves. Women are easily influenced particularly when they want more power. And let’s not take away “the time of the month” when some of them go nuts. You clearly don’t want one of them at that time with her thumb on the button.

Either she’s stupid as it gets, or this is some smokescreen and parade for Americans.

The Germans should just stick to things they are good at like sodomy.