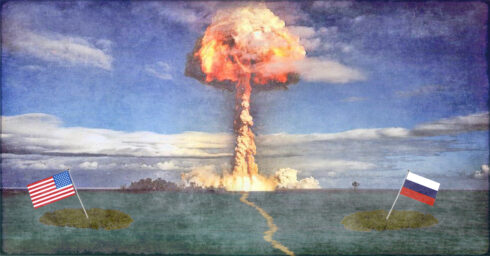 Nobody knows for sure what happened to the radioactive sources that were available to Ukraine in Soviet times. ” Many Soviet-era radioactive sources are not on anyone’s radar, not even in Ukraine’s ” is the alarm raised by Vitaly Fedchenko, a nuclear safety expert at the Stockholm International Peace Research Institute. There are many radioactive sources in Ukraine, extremely sensitive material in wartime, material that could entice those who want to precipitate the conflict between Russia and Ukraine and turn it into a nuclear scenario.

With the collapse of the Soviet Union, in 1991 Ukraine found itself in control of about 5,000 nuclear warheads between strategic and tactical weapons, the third largest nuclear arsenal in the world after Russia and the United States. To the detriment of a certain internal opposition, the country chose denuclearization from the beginning and in accordance with the Budapest Memorandum of December 1994. By June 1996 all nuclear weapons (and their vectors) were dismantled or transferred to Russia.

But even today, experts count thousands of sites in Ukraine that contain radiological materials. Most of those substances are under the watchful eye of the Ukrainian nuclear regulator. But most, in these cases, is not enough. Because the nuclear option has been at the top of the list of risks since the beginning of the conflict, with Moscow and Kiev accusing each other of being in the process of using a dirty bomb, a bomb whose explosive material is contaminated with nuclear substances.

A scenario that could easily spiral out of control. Thus, the information collected on social channels is of great concern. Telegram is not always a reliable source but for some days rumors have been circulating that the Kiev authorities speak of preparations for the construction of a dirty bomb to be used in the conflict.

The following information appeared in Ukrainian telegram channels – “Our source in the Presidential Administration told us that the President’s Office is ready to create a dirty nuclear bomb to deter Russia. A headquarters has already been set up at Bankova with atomic scientists and military officers who are urgently preparing a team to develop nuclear weapons.”

Is it just propaganda or is there something true? Impossible to say for sure. But the consequences of such an action, if it were ever true, would be unimaginable for the entire planet. It is of little importance to establish who can push the nuclear button first: it does not matter whether it is a tactical device or a dirty bomb.

A nuclear attack would involve the immediate reaction of the other party. Researchers and scientists have no doubts. It would be the first step towards escalation. A nuclear war, even if regional in scope, would have such an impact on the climate as to cause a drastic reduction in crops and condemn a large part of the world to starvation, with a number of deaths that could range between a few hundred million and 5 billion.

The latest paper available on the consequences of a nuclear conflict in Europe was written last year by Rutgers University in New Brunswick. The researchers compare six possible nuclear conflict scenarios. One of the hypotheses considered is precisely that of a nuclear confrontation in the heart of Europe, with its epicenter on the border between Russia and Ukraine. The worst case scenario, the one that would occur in the event of a conflict between the US and its allies and Russia, would produce 150 million tons of soot and a nuclear winter on a global scale. The reduction in the availability of food in the world would be about 90% and more than 5 billion people would die from the consequences of hunger.

“In conclusion, the dimmed light, global cooling and likely trade restrictions after the nuclear wars would be a global food security catastrophe,” the researchers write.

There is only one rule to be respected in the face of the madness of the world: a nuclear war cannot be won.

US gift to EU before midterms 🏴

Does not matter… the Prostitute (CIA) is about to be exposed. “They will tear her flesh she will be exposed”

Ukraine is a king installed by the CIA and only has a biblical “one hour” short time to live.

The empire of the beast with seven heads (G7) and Ten horns (countries like Ukraine, Poland etc) is coming to an end.

The whole world should celebrate this!

This is another reason why NATO should join up with Russia and remove this psychopathic junta and install in place a real democracy or temporary UN managed government. Blowing up EU pipelines, shelling NPP and nuke waste reposotory, shelling civilians for 8+ years, killing its own citizens to make psychopathic psyops—all this has gone way too far. Clowne world must end one way or another, and this way would be the good path.

What?!! You don’t know that NATO was behind all of it? They’re evils in human clothing.

I'm too from Romania

If jew owned EU accept to be again the Empire of Lies and terror to the end, let’s be IT ! It deserves annihilation together with his oberpimp JUSA.

Two superpowers are facing off with nuclear weapons. Meanwhile in the middle we have Nazis who have no problems with starting wars and taking life. What could go wrong?

Only normal folks will suffer and die in conventional wars. What’s so bad about nuclear war?

From the start of the SMO Putin has threatened to use nuclear arms three times.

All major power conducted THOUSANDS of nuclear experiments and there was no such effects.

I don’t know what you’re talking about.

russia is losing so badly they are getting desperate…heheheh

any nuclear power plants inside Ukraine and near to Poland border should be strategic targets for a hypersonic missile strikes.

should choose the period where wind conditions consistently blow towards Europe.

Good Idea, just pop it outside the gate at Rammstein.

“Most of those substances are under the watchful eye of the Ukrainian nuclear regulator.”

Well that’s OK then. (and if that reassures you..you should probably be medicated and institutionalized)…

but …wouldn’t these be the same imbeciles perchance that failed to point out that firing missiles at a nuclear power station could perhaps… just possibly.. be quite dangerous..

Would Zelensky’s dirty bomb be worse than Chernobyl or Fukushima? Both of the areas seem ok today. Not to mention Hiroshima. Nagasaki and Beirut. I guess what I’m saying is, it seems nuclear weapons while certainly destructive, are not as detrimental to the planet’s survival as were told. Just a thought.

Niggers are less affected by radiation. Blacks will thrive, along with cockroaches.

Whether a nuclear war is ‘winnable’ or not does not prevent this event from occurring. The outcome of a world war in a nuclear era is self-evident (likely the product of reaction rather than calculation). As such, adequate preparation by Russia and China for this potential (I would suggest approaching) event would be prudent (as the US-NATO-allied bloc seeks to attain nuclear primacy, so should this be a matter of priority for the military commands of Russia and China).

Missile warfare is a key feature of modern warfare. With minimum times from detection to response, radar data unable to determine if incoming missiles are conventional or nuclear, worst case assumptions will be required. The eventual outcome of ongoing US-NATO-allied bloc escalations is a matter of logic (a direct stage of warfare between opposing nuclear armed powers).

Note: Hypothetical exercises by various academics may be of interest to some but are largely irrelevant. As this event is likely to occur in the context of gradually unfolding developments (another world war scenario), we will likely find out through experience (at least those who may survive). Worst-case assumptions are however unlikely to occur. While famine, disease, violence, etc., would claim many lives subsequently, normalization of environmental conditions would logically occur upon the end of the fallout period (1-2 months depending on proximity). Many nations would however be largely destroyed in such an event. It would be prudent to monitor global developments closely (US-NATO-allied bloc escalations moving towards broader situations of war against China, the DPRK, Iran, etc.) and to quietly prepare accordingly.

Niggers will thrive, just like the black frogs at Cernobîl. Too bad madamm Zelinsky will be dead, she would enjoy a black dick party in the bunkers…