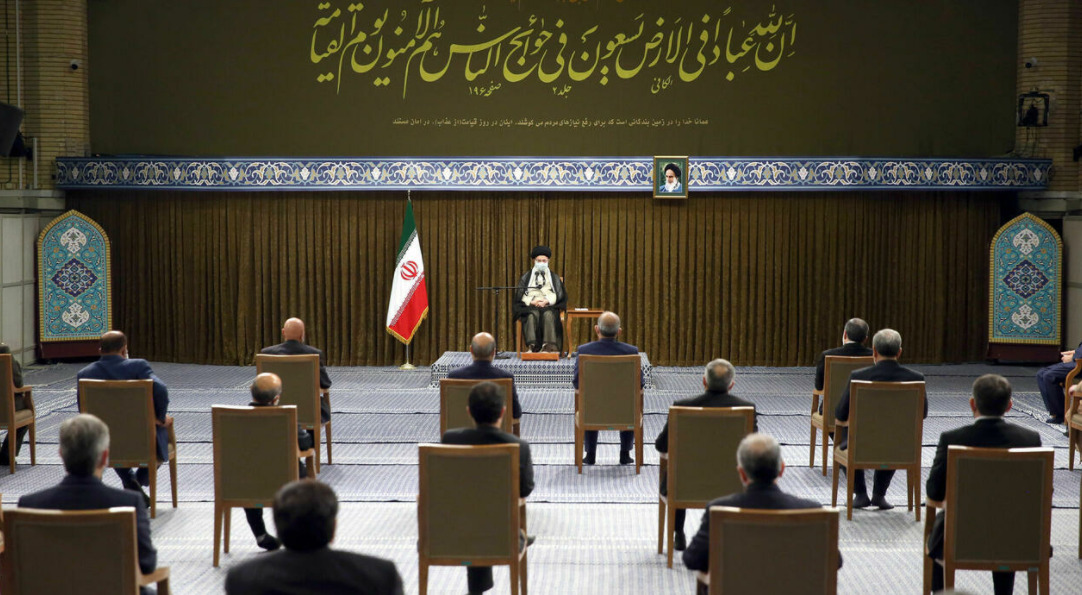 On August 28th, Iran’s Supreme Leader Ayatollah Ali Khamenei had his first formal meeting with the incoming cabinet of President Ebrahim Raisi. One of his main calls to the new government was to “repair” the public’s damaged trust in government. Speaking about the foreign policy, Khamenei also blamed the U.S. for “shameless behavior”, describing U.S. Presidents as “predatory wolves”.

Supreme Leader asked Raisi’s cabinet not to waste time, to be aware of public perceptions and to uphold public trust with their work and their lifestyle.

“These four years will end soon, so use every hour, every opportunity. Do not let time be wasted when it belongs to the people and to Islam,” he said.

Khamenei called on the government to boost international “economic diplomacy” with other states, and paid special attention on the Iran’s neighboring country Afghanistan. Having offered his condolences over the recent terrorist attacks in Kabul, he blamed Washington for the current chaos in the country.

Moreover, Khamenei claimed that the United States “acted shamelessly” during the negotiations on the nuclear deal, and that  President Joe Biden is not different from his predecessor Donald Trump.

“The current US administration does not differ from the previous administration,” he stressed. “There is a predatory wolf behind the scenes of US foreign policy that sometimes turns into a cunning fox. The situation in Afghanistan today is an example of US policy.”

While blaming Washington of “shameless” behavior on Iran’s 2015 nuclear, Khamenei explained that it acted as if Iran left the accord and not these were not the Americans who had unilaterally withdrew from it in 2018, additionally imposing harsh sanctions.

The similar accusations targeted the European members of the deal, who were said to act the same way as the U.S., “but in words and rhetoric they are always demanding, as if it was Iran that for long ridiculed and undermined negotiations”.

Khamenei made his claims at the time when the two sides are expected to head back to Vienna for talks.

Iran has recently confirmed its readiness to at some point continue six rounds of talks that ended on July 20th. However, the exact date of a new round remains unknown.

The sides are yet to decide on how and what sanctions should be lifted as well as how Iran should scale back its nuclear programme.

Khamenei’s remarks may be seen as a signal to the U.S. before talks in Vienna. He stressed one more time that new Iranian government would stand still, working on country’s international trade amid the U.S. sanctions.

In his turn, Biden is yet to fulfill his promises to return to the nuclear deal. He is still following Trump’s pressure policy and refuses to lift any sanctions before an agreement is reached in Vienna.

Iran had a big win in Afghanistan and with no civil war breaking out it could become the game changing factor for Central Asia. Furthermore the US gambled on chaos and sacrificed their political standing to make it happen but Taliban is on to them and are able to restrain their instincts for revenge in order to really hurt the bastards. All praise be to Allah (swt). My claim to be Jesus Christ is going well but satan has a powerful hold, for example the Jew Freemasos are pinning their hopes on the quad but China is pulling the plug on Taiwan and Russia is ramping up armaments sales to India so they can have first hand experience in getting to know what their dealing with.

In 2015 all partners signed a contract. The only one that comitted to this contract was Iran. There is no need to negociate anything. All partners have to do what stand in the contract signed in 2015, no less no more. So Iran can kick the nuclear spys out of the country. When the not trusworry signands do there contractual behavior, Iran can recom to the deal. In Vienna they are playing a dirty game, stay out of that. In the same time give them a taste off there medicine, an stop using the dollar in your trade. When one will do a foolish act, be readdy to retaliate so that they never ever try it again.

Satan and his demonic Jewish followers never honour their contracts or deals.

Iran isn’t sticking to the deal, because there is no deal, it sticks to the terms to demonstrate to the world what is obvious, that Iran is honorable, credible, and a trustworthy, respectable partner in all circumstance’s. As well as reinforcing it’s statement Iran is developing nuclear capabilities for civilian use. Concentration for use for military purpose’s is 90%. US behavior serve’s as proof it has zero credibility, honor, or sense of duty to responsibility, sadly. It’s a criminal terrorist organization, and supporter of terrorism. Not to be trusted further than one can throw a dromedary.

The pretender’s will use their nukes despite knowing full well, they’ll be destroyed to the last pretend son of a bitch.

With the CIA trained, armed and controlled tallywackers in charge, plus Israel’s proxy terrorists ISIS to play instigator, Iran is closer to destruction than most people realize.