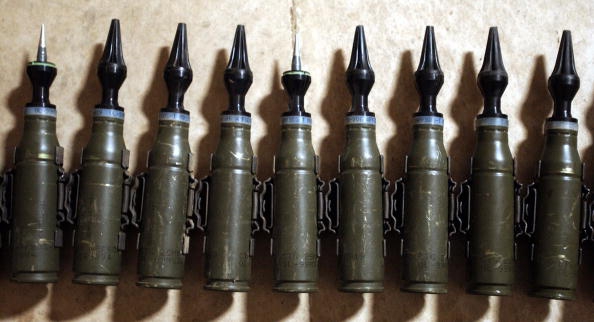 This article originally appeared in Russian at russian7.ru

After the collapse of the USSR the media started reporting on a mysterious weapon developed in the 1960s. Nobody really knows whether it was a hoax, or the “nuclear bullets” really existed.

The main material for creating a nuclear bomb is either uranium-235 or plutonium-239. In order for explosion to happen, the charge should have critical mass. The critical mass of uranium and plutonium is 1 kilogram. The nuclear ammo’s caliber for heavy machine guns was reported to be 14.3mm and 12.7mm. Some even reported 7.62mm caliber nuclear bullets for Kalashnikov assault rifles. Such small nuclear projectiles are widely considered to be unlikely even today.

According to the sources, Soviet physicists were producing the nuclear bullet fillers out of transuranium element called californium. The atomic mass of this element is 252, while its critical mass is meager 1.8 gramm. Californium-252’s biggest advantage, however, is that from five to eight neutrons are created during its fission, as opposed to uranium and plutonium creating from two to three.

The scientists have figured out two ways to produce californium. The first one is considered to be the simple one — a nuclear bomb explosion. The second one is to create the isotopes using a nuclear reactor. The former method is considered to be more effective, because the fluence rate of neutrons is superior compared to producing californium in a reactor. However, you’d have to conduct nuclear tests non-stop. They were apparently conducted at the infamous Semipalatinsk Test Site.

So, the bullet had a tiny californium part not heavier than 6 gramm in a form of a dumbbell — two hemispheres connected by a thin bridge. The explosive in the shell was in a form of a compact ball 8mm in diameter (in the case of a 7.62mm bullet). These were enough to produce a nuclear explosion upon impact. The tests reportedly showed that one bullet was able to smelt tank armor and vaporize bricks.

Why did the project get cancelled?

Nonetheless, in the early 80s, before Brezhnev’s death, the project was cancelled. The problem stemmed from californium fission producing too much heat. Each bullet produced up to five Watt of heat, changing the properties of explosives and the exploser itself, which could lead to bullet being stuck in the gun or even self-detonation.

That’s why the bullets had to be kept in a special refrigerating device, a 15 cm thick copper plate with 30 bullet sockets. Liquid ammonia was acting as a coolant, supplied through the channel in between the bullets. The temperature was sustained at -15°C. The refrigerator device weighed 110 km and consumed a lot of energy (200 Watt), hence transporting it required a special vehicle. Adding to that, a nuclear bullet should have been used half an hour after taking it out of the refrigerator. If the bullet was out of the device for more than an hour, it should have been destroyed, which also required special equipment. In short, it was very cumbersome.

The other significant detriment of the bullets was the fact that the energy created by the explosion was unstable. It varied from 100 to 700 kg of explosive yield. This blast radius  was small, yet produced a high radiation level. In the end, these mini-bombs were effective in extreme long range, yet the shooter was at risk of serious radiation exposure. Therefore the sharpshooters were not allowed to fire in long bursts, with the maximum of three shots at a time being allowed. The explosion would not happen if the shot hit the water, as liquid slowed down and deflected the neutrons. Lastly, the californium supply produced with nuclear explosions depleted fast, and using reactors to produce it would be far too costly for lesser effect. All these factors contributed to the project being shut down.

There is an account of the first small nuclear charges being developed in the US during the Cold War in the 1960s. This project focused on killing living beings in a certain radius using a special gas produced during a nuclear reaction. USSR developed the nuclear bullets as a countermeasure. One way or another, these projects did not come to fruition.

Can these legendary bullets be found now? Researchers suspect that some of them may be in museums or private collections, although their shelf life was estimated to be six years, so they would not be fit for use.

A nuclear bomb test was conducted in Texas recently. The bomb was made with a hafnium isomer core, with a 50 kg of explosive yield. In order to produce the isomer, the core of the element was irradiated by X-rays. This resulted in a colossal amount of gamma-ray spectrum energy produced, which is harmful for living beings. Fairly powerful weapons have been developed in Russia as well. Perhaps they will surpass the Soviet nuclear bullets we did not get to see.

That’s a one way towards nuclear escalation anyhow.

The US Libtard military being destroyed with ” Californium ” would rather ironical though :)

Two years have passed and we are now nearing the climax I suspect.

Interesting element. It’s being produced at about .25 of a gram per year in both the US and Russia. There are actually 3 ways of producing ca252: The nuke explosion, reactor, and particle accelerator.

The stuff is so dangerous that in order to transport 1 gram of the stuff requires a 50 ton shipping flask….

” The critical mass of uranium and plutonium is 1 kilogram.” Nice try guys, try 52kg and 10 kg… and for Californium it’s between 3 and 6 kg. https://en.wikipedia.org/wiki/Critical_mass#Critical_mass_of_a_bare_sphere

We already have a serious problem with nuclear armaments – depleted uranium. This stuff will turn out to be one of the biggest health scandals in history if we manage to get through another decade without either the USA or Zionists killing us all.

So I guess just making miniature APFSDS-DU rounds for small-arms and crew-served weapons is out of the question?

“The critical mass of uranium and plutonium is 1 kilogram.”

What a cr@p! Why the author does’n go to do some basic research before writing this pile of sh*t?

1. The critical mass of Californium-252 is a few kilos. 2. It cost about 25 million per gram to make and only 8 grams have been produced. 3. Each gram gives of 2.3 TRILLION neutrons per second, making it extreemly hazardous to handle and means that any attempt to use it for a gun type nuke is guaranteed to pre-detonate and fizzle.

This article is completely bullshit.