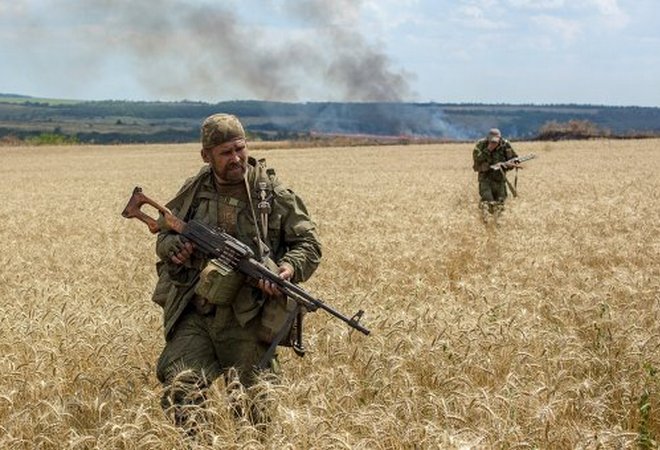 How the militia of Donbass has prepared for half a year for a new UAF attack.

This article originally appeared at Interpolit.ru, translated from Russian by Carpatho-Russian exclusively for SouthFront

— “Proofs concerning five thousand law-enforcement personnel and approximately three thousand military are being gathered. They will be brought to trial”, declared Matios.

The last notorious case of the transfer of high-ranking Ukrainian security officers occurred in June, when Kiev reported that two officers of the foreign intelligence service of Ukraine went over to the side of the militias. A criminal case was brought under the article on state treason. In this regard, despite the facts confirmed by Kiev on participation of thousands of former Ukrainian security officers in battles on the Novorossiyan side, “independent” Ukraine still refuses to recognize the conflict as a civil war, instead going on about “Russian aggression”.

We have more than once described how the UAF changed after “Minsk-2”, and how mobilization plans are being carried out. But what transformations in Novorossiya’s Armed Forces (NAF) have occurred during this same time?

We note that according to the Minsk agreements it was stipulated that the Donetsk and Lugansk National Republics must not have an army, and that their armed forces must be set up as a national militia.

So, on October 7 by Decree of the Head of LNR Igor Plotnitsky, the army of the Republic was converted to the National Militia of the LNR. In Donetsk the armed forces likewise began to be transformed into the National Militia Corps of the DNR Ministry og Defense. Thus, Novorossiya’s armed forces consist of two army corps (AC), the 1st (Donetsk) and 2nd (Lugansk). Information on them is rather sparse, but it is known for example that the LNR National Militia contains separate 2nd and 4th brigades, one artillery and one tank brigade, a reconnaissance battalion, territorial defense battalion, and so forth. Armament is T-64 tanks, BMP-1, BTR-80, SAU 2С1, BM-21 Grad, Msta-B, ZRK Strela-10 M, etc.

According to the representative of DNR in Rostov Oblast Eduard Popov, the national militia of LNR and the DNR corps have a precise military structure which it has been possible to build very recently.

— In addition, there are also other force agencies with particular capabilities — the Ministry of Internal Affairs and the Ministry of State Security in the DNR, the Republican Guard, and a number of other subdivisions. The precise number of force structures of both republics was never sounded out, but, I think that in the DNR it exceeds 25,000. Despite all failures of mobilization plans, Kiev’s capabilities surpass those of DNR by a factor of two. But the level of motivation of the fighters of DNR and LNR protecting their own families and homes, significantly exceeds that in the UAF — there, only nationalists and military personnel of airmobile forces are ideologically stable and ready to be at war with their own brothers.

The level of preparation of people in Donbass varies significantly, and depends not only on specific subdivisions, but also from its fitting out. It is clear that it is impossible to demand from the staff of the Ministry of Internal Affairs the same qualities as from fighters of army divisions.

I note that, however much they criticized Minsk-2, it did however bring in many pluses. For half a year, military construction in both republics went along at accelerated rates: supply services were arranged, operational coordination was carried out, company and even battalion training was conducted, and a great percentage of staff passed through the training grounds. In comparison with February, the DNR armed forces of August are distinguished by their good order. Let’s say, on the tank ranges fighters engage daily under the leadership of instructors who have considerable fighting experience behind them. In my opinion, the DNR armed forces surpass the army of Ukraine qualitatively overall, but as I already said, fall short on numbers.

Regarding armament, during the time that war proceeds between Ukraine and Donbass, hangars and DNR and LNR arsenals are being considerably replenished with UAF equipment — trophy items and those sold by Ukrainian troops. Another thing is that for the last two months, militia located on the line of contact are noting the presence of foreign equipment with the UAF. In addition, my companions repeatedly have had contact with an opponent with a totally different level of preparation from the Ukrainian troops. In their opinion, these were not even groups of mercenaries from western countries — they were very coordinated and interacted in an ordered manner. Most likely, theses are actually regular detachments of NATO special operations.

Journalist Dmitry Rodionov who has been multiple times with divisions of the NAF, says that Novorossiya’s present army has been essentially transformed in comparison with the summer of 2014 when, in fact, divisions were “Makhnov groups”.

— At that time there was neither unified command, nor normal provisioning and uniforms, nor supply of ammunition. People quietly passed from one division to another, not even informing their command. Also it is necessary to pay tribute to the head of LNR, Igor Plotnitsky, and the leader of DNR, Alexander Zakharchenko. They carried out the tasks for structural formation of force agencies. Literally last week, one of my companions signed a contract with national militia for five years. That is, it is possible to actually speak about the formation in the republics of professional force structures.

The former commander of the 58th Army of the Armed Forces of the Russian Federation, Lieutenant General Victor Sobolev, notes the eradication of “partizanshchina” [guerrilla warfare] in the republics, hardening of army discipline, and adjustment of organizational and staff structures of brigades and battalions. And at the same time he points to an insufficient level of combat training of the militia.

— Front-line soldiers who have taught in military higher educational institutions have constantly said, never send a battalion into battle if has not had some training under field firing. People must experience how interaction is carried out between attached units and the divisions. To say that in the DNR and LNR such high-grade learning is developed will be a major exaggeration.

Military expert Anatoly Nesmeyan (El-Murid) says that the staffing table in the brigades and battalions of the republics is far from being completed everywhere.

— What is called a brigade can correspond to a regiment. I think the total number of NAF comes to approximately 50,000. But the main problem is in qualitative composition: volunteers often leave, and contract employees are the main support, but they receive a rather low salary by our measures. And the qualitative composition of volunteers from Russia has likewise changed. Generally it is someone who was not able to find himself in the army, although here of course there are exceptions. In the divisions there are major issues with command composition.

By and large, the NAF is a militarized militia, which under dense fire can conduct itself as it pleases. Naturally, in Debaltsevo it was clear that such an approach does not lead to anything good.

At the tactical level, training in DNR and LNR is done very well, but there are still difficulties.

As regards provision of equipment and armament. Militia detachments lack sufficient communications, especially in tank divisions. Donbass very much needs handheld transceivers, because their tanks are far from being all radio-equipped. Yes, the T-64s are “dressed” by the militia in Contact-1 and even Contact-5 DZ (dynamic protection), but if there is no communication during battle, then interaction will be carried out by what is called using a wrench — knocking on the plating. That is, having received a task, the tankmen will carry it out to the end, despite the fact that the situation can exchange, as well as the orders.

— Yes, but considering that Ukrainians had “burrowed into the ground”, the efficiency of their rocket systems, by and large, greatly decreased. They are good for open areas, covering columns on march, etc. And to break bunkers, etc., powerful howitzers or a large number of portable anti-tank missile systems of the Fagot type are necessary.

And although the DNR and LNR have enough artillery — howitzers and self-propelled artillery – nevertheless it is necessary to refashion the entire structural composition of the available artillery group. In addition, the main issue in its application, and specifically so, is in its interaction with the infantry. Here the situation is rather unclear. On the other hand, it is evident that counterartillery suppression is not conducted very much by the militias: if every day the UAF shells the cities, then that means that the NAF artillery is not able to neutralize their firing positions.