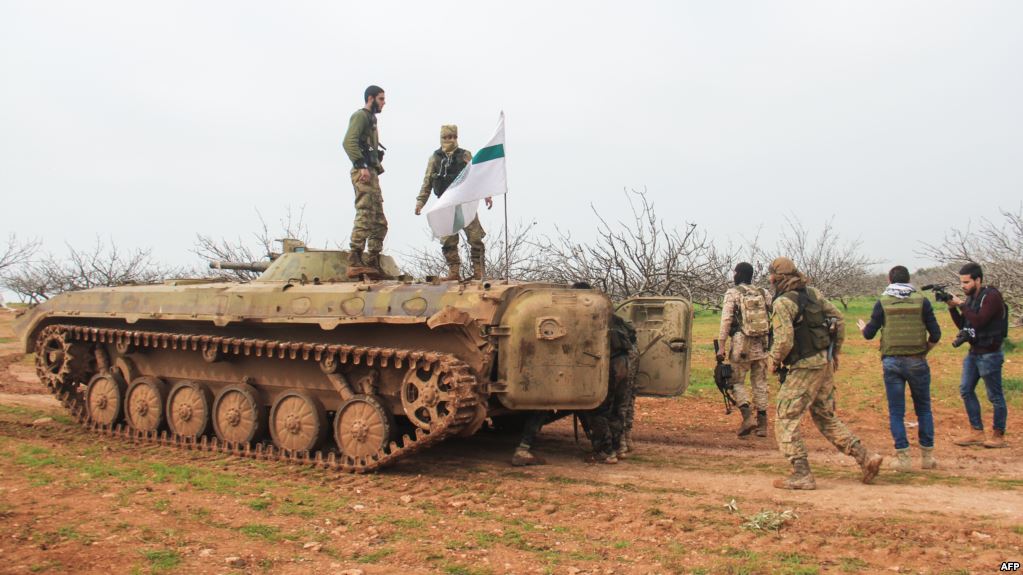 On November 10, Ali Saidou deputy commander of the Nour al-Din al-Zenki Movement announced in an official statement that the movement is now in an “open war” with Hay’at Tahrir al-Sham (HTS). Saidou also accused HTS of attacking the positions and fighters of al-Zinki movement north of Aleppo city, and in the western Aleppo countryside on November 7.

In the official statement, Saidou called on the civilians and religious scholars in Idlib province to support the Nour al-Din al-Zenki Movement’s war on HTS. Saidou also promised that the group will support foreign fighters in Idlib, who are usually affiliated with al-Qaeda or ISIS, if they don’t support HTS against it.

Meanwhile, Syrian opposition sources reported that HTS and Nour al-Din al-Zenki  members are now clashing in Sheikh Sulaiman, Kafarnaha al-Ibizmu villages and in the 111th Brigade military base in the western Aleppo countryside.

The sources also reported that HTS fighters opened fire on civilians who were protesting against HTS in Urum al-Kubra town in the western Aleppo countryside, injuring many of them.

HTS will likely launch a wide-scale attack against the Nour al-Din al-Zenki Movement and make an attempt to eliminate it in the upcoming days, if the movement does not receive any support from the Turkish Army, which is stationed in the northern Idlib countryside now.

HTS is still the strongest military force in Idlib province in terms of fire power and public support.

The more they kill each other the better. It is all a power grabbing exercise by rival gangs who hope to gain political mileage as the war subsides anyway.

The timing seems to good to be true, but hey !!, God works in mysterious ways.

Hopefully the SAA will wipe them off quickly.

Let them fight it out, whilst the SAA get some well deserved rest + back up.

No offense, my view only.

This is precisely what is happening in Libya. So much opposition against the government is later channeled at each other.

That’s because opposition against a common foe, the government, was the only thing uniting them. Take that one thing away and you are left with different groups with different agendas with the military hardware to fight out their differences, and the will and experience to use them.

Relocating all the vermin to Idlib is looking more and more like a brilliant strategy.

has it occured to you that thi might just be an excuse for Turkey to invade Idlib province and not just have troops on vacation there…..it was supposed to be a common effort between turkey and SAA to defeat HTS…..then we saw Turkey having a meeting with HTS and making a deal. Turkish troops were accompanied by HTS until they reached their target location…ever since….they just polish their boots and clean their weapons…..now they are given the excuse to move further inside SYria…..’fighting’ again HTS who murders civilians….and one last thing……why arent those men fighting instead of protesting? protesting while your country bleeds……lazy cowards

HTS adopted this initialed acronym so it could sound like and get closer to its mother HNC. Also in a similar terms of semantics Uncle Un just bested Uncle Sam, a pattern is emerging which started forming when JFK was done in by LBJ, and now Jared Kushner has led Salman into al – black hole and Netanyahu is leaving him in the meridian mire where a 180° is inevitable but probably untenable, so naturally then Kushner’s head is going to roll when Trump starts waiving his hands around, again, hasn’t he got anything better to do with this life, if you could call it that.

O heck, I know what to do. Quick as the flicking lizard tongue…. BLAME the AMERICANS. Because after all, Muslims never killed other Muslims, until our Marine s attacked the ‘shores of Tripoli’..