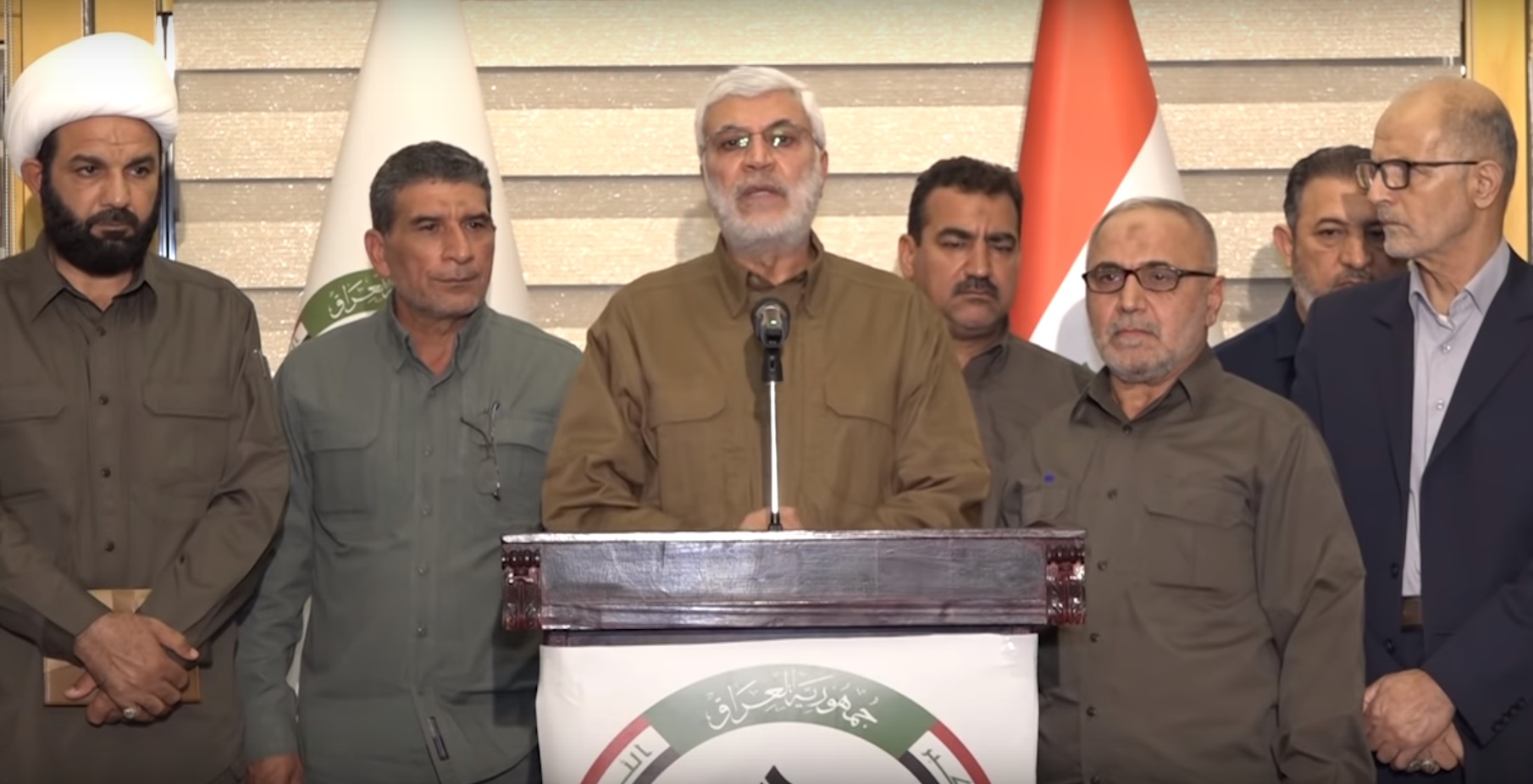 Al-Muhandis during the press conference in the Iraqi capital of Baghdadi.

On June 24, deputy leader of the Iraqi Popular Mobilization Units (PMU) Abu Mahdi al-Muhandis accused the US-led coalition of carrying out infamous airstrike on a position of the PMU near the Syrian city of al-Bukamal on June 18. Beck then, more than 30 fighters of PMU were killed.

Al-Muhandis revealed that an investigation committee formed by the PMU visited the site of the attack and was able to confirm that a US-made missile was used to target the PMU fighters. The deputy leader of the PMU said that the missile was “clearly” launched by the U.S.

“The strike was carried out with a missile and we still have the remnants of that missile,” al-Muhandis said, during a press conference in the Iraqi capital of Baghdadi.

The results of the PMU investigation contradicts to the claims of an unnamed U.S. officials who told the CNN TV on June 18 that the airstrike was carried out by the Israeli Air Force (IAF). The official didn’t explain back then how the IAF was able to reach al-Bukamal without coordinating with the US-led coalition, which is operating there.

During the press conference, al-Muhandis also criticized the Iraqi Military Joint Operation Command for their “hasty and confused” statement on the incident, in which they claimed that the PMU don’t have any units near al-Bukamal.

“The crime is considered a war crime and we are waiting for the government to defend the rights of these martyrs,” al-Muhandis said at the end of the press conference.

The PMU has not made any threats against the US-led coalition yet. However, the Iraqi force may take action against the coalition inside Iraq if the Iraqi government continues to follow the U.S. narrative.

But the spare Sunni Wahhabists. Trump’s no-visa list includes ONLY Shiite countries like Syria and Iran that are fighting Sunni terror. The ISIS-sponsoring Saudis are exempt and are welcomed with open arms in the US. Yeah, this is for security.

I never believed the US statement in the first place. Their first thought is to lie. A Syrian officer on the scene said it was a drone attack coming from the direction of US lines. Manpads need to be issued to these front line troops.

Pantsir systems are best for this. They can take on even a swarm of incoming missiles or drones, up to a certain limit, of course.

There is no fucking difference between the Zionists and the Neocons all same shit, but different packing. Why this US coalition killed these PMUs for what benefit, and then blame each other with the zionists. Probably it is one thing that comes to my mind, they were about to crush some ISIS stronghold and the US saw that and bomb them, the US must protect their proxies in Syria, the ISIS-Daesh, if not, if all Daesh are dead, there is no excuse why the US is there in Syria. So eventually they have to protect their investment of going totally destroyed.

And the haters always shouting zionist are the same shit, with the worst, nazi package.

Your anti-gentilism sucks eggs. When will you get that the word ‘zionist’ is now synonymous with ‘nazi’? All because of your pathological bloodlust and kelptomania.

You need to get out that synagogue of satan more often.

You’re projecting again mister closet homo. No one is gonna be more punctured than tel aviv in smoking ruin. And guess what? Your ISIS friends can’t do shit to help you against the Axis of Resistance when they come for you in them satanic jewish settlements. If I were you, I would start turning that sheet you’re wearing on your head into a diaper. You’re gonna need it – by gawd you’re gonna need it!

Putin the zionist appeaser knows the truth. Nothing happens anywhere in Syria without Russiam military intelligence watching. Every attack by a major foreign nation is greenlit by Putin himself.

So why didn’t Russia spill the beans this time- as they have done on SOME other events? Well the zionist appeaser operates in lock-step with the USA and Israel, having agreed to America’s demand to partition Syria. Russia allows the yanks to operate in Iraq (Iran, the other major power in Iraq, wants the USA out but cannot achieve this while Russia backs the USA in Iraq). And America occasionally seeks to establish its dominance by wacking official Iraqi forces, like Putin does now and again in novorussia, when the locals dare to declare too loudly their unhappiness at daily shelling and sabotage by the neo-nazis of Ukraine that Russia official supports (yes, Russia’s daily trading with the neo-nazi regime is the only thing keeping it in power).

Politics is a DIRTY business. A true peasant LOSER ‘thinks’ his ‘team’ actually cares about him/her. Putin considers Trump an equal. He considers the grunts on the frontline as disposable assets and nothing more.

Again, please research Putin’s voting record at the UNSC. It has 100% supported the neo-con wars that followed the 9/11 false-flag (which Putin has repeatedly claimed happened according to the Deep State ‘official’ narrative).

thats the handwriting of them satanic jews.they always proove me right.satanic, evil through and through…..and there will be no help from either us jew slaves or eu jew slaves or russian jew slaves or china jew slaves.Whcih countries do not recognize the illegal entity named israel??those are the countries being hammered now….the countries that do recognize israel are in on the plot…russia best friends with israel, so is usa, china,eu etc… and just to make u think for a second…which country refuses entry to jews…which country “lost” a couple of passenger airline planes by “mysterious circumstances??malaysia…warning from the jews…thats what it was.

usa is scared shitless of PMU…they know that if the PMU decide to engage us forces in iraq…its over in 2-3days………but more imporatnt is the silence of iraqs prime minister…clearly a us stooge……imagine in any country of the world that your forces are being butcherd by your so called allied nation and the prime minister stays totally silent.clearly like saddam hussein a us stooge, with the same promises made to saddam through the early years of his leadership in iraq…its the usual “selling my soul” …do as we tell, and you are made king of this country with all the sweet packages that come with it. PMU….time to get your country back…kill abadi and his traitors and the 2000+ us forces and the 8000+ western private contractors(mercenaries)

(..usa is scared shitless of PMU…they know that if the PMU decide to engage us forces in iraq…its over in 2-3days……but more imporatnt is the silence of iraqs prime minister…clearly a us stooge..)

You are absolutely right! PMU should now avenge the blood of their heroic warriors bakstabbed by the satanic US while they fight ISIS. As for the Iraqi PM, he is indeed an American stooge and the PMU should deal with him as such.

Snipers should be engaged immediately and for every Iraqi/Syrian killed or injured the equivalent plus 2 US coalition get shot.

I agree, the US should be told to leave Iraq forthwith and if the US Military does not ,the IED campaign that pushed the squatters to leave the last time would work again now.

Probably, like Russia and China, the Iraqis know that they can only afford to make small waves and are awaiting the moment when the dollar is only good for toilet paper.

To all AngloZio/WASPs Scum Of The Earth… How Much Cock did you jews take up the ass in ISISraHELL In HELL’AVI-! At the ‘2018 BIGGEST IN THE WORLD GAY PRIDE’ Parade-? While Innocent Palestinian Unarmed Civilians Were Shot In The Back-! While All https://uploads.disquscdn.com/images/05b72c43e54fad9b4d43445dc60544b8d3c3c2d9bbaed613a8bd6e59e3de370c.jpg The Scum In the World Was At The Sucker Traitor USG-Opening Of The Scumbag US-Embassy

As usual the Arabs redefine words for propaganda’s sake, it’s an act of war not a war crime. We’ll never know for sure who carried out the attack, there are many such things that go on under the surface of this “congested battlefield.” On the other hand, who cares? One of Iran’s enemies hit their proxy and got away with it, the inability to establish firmly who did it rules out counter action.

If the West can lay the blame on Russia for the downing of MH17 because it was a USSR made missile then logically one can blame the US.

I have a sneaking suspicion that the Iraqi government told that PMU to stay in Iraq and was ignored so gave the green light to whomever to blast some sense into them. Gotta remember that the government in Bagdad wants to demobilize and disarm all the PMU militias!

Do you sneak professionally, or are you an amateur sneak?

The US manufactured missile fragments are a primary indicator of who was likely responsible. US warplanes operate freely within Iraq and routinely violate east Syrian air space to fly cover for the US-SOF occupation there – whereas in contrast, Israeli warplanes would have to enter well inside of Jordanian air space to achieve the required range of absolute eastern-most Syria – such a flight path would not have gone unnoticed or unreported. It remains the Iraqi-PMU’s decision as to whether they consider some form of recompense should be pursued.

You know, if you were a true Israeli, a descendant of the people of Moses, you would be an Arab.

Are you testing if I Jewish by seeing how offended I get? . But no. And to correct you the Quran said that Ishmael (founder of Arab culture) was the miracle child God gave to to Abraham and Issac (founder of Jewish culture) was the adopted son, while the Torah claims it was the other way around. Moses is considered a major profit sent to the Jews in ancient Egypt by both religions. . And no, I American like you most likely are too.

That suggest a notable interest in the theological debates between the advocates of the Quran and Torah – over the original source identities.

But your Disqus handle name of Elijah is a Hebrew name right – meaning, ‘my god is Yawheh’. That combined with your notable interest in the theological distinctions and conflicts between the Quran and Torah, regarding key original narrative figures, is rather suggestive. Incidentally, ‘American’ is a nationality – not an ethnic or religious status.

Iraq is already acquiring Russian weapons and the US has not objected very much because the Pentagon knows that the US position in Iraq is shaky. Iraq bought $4.2 bill in 2012 https://www.reuters.com/article/us-russia-iraq-weapons-idUSBRE8980KB20121009 and at least 1 bill in 2017 https://www.strategic-culture.org/news/2017/07/22/moscow-baghdad-sign-huge-arms-deal.html. Talks are ongoing regarding the S-400 American bomber killer air defences.

Things are starting to warm up and telling the Iraqi government to stop interacting with the US is a threat of civil war.

Iraq should retaliate by denying the use of it’s air space for the US Coalition to carry out operations in Syria, now that ISIS is defeated.

It is rather difficult for Iraq, you have obviously seen how the US bombed the country back to the stone age? Obviously they don’t want another dose of American freedom bombed into them, so they are very careful not to anger the dogs of war.

“The crime is considered a war crime and we are waiting for the government to defend the rights of these martyrs,” al-Muhandis said at the end of the press conference.

What can we expect to happen?