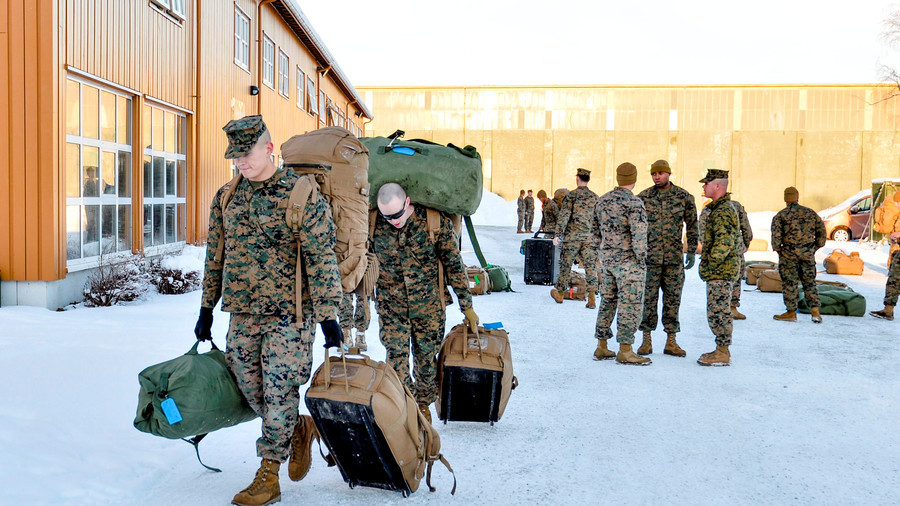 Norway has requested the US to increase the number of US Marines deployed in the country and lend them for longer.

According to reports, Norway will ask the US to station 700 Marines on its territory, starting in 2019. This number is over two times higher in comparison to 330 Marines that are currently deployed. The US troops will be based in the Inner Troms region of the Norwegian Arctic, close to the Russian border. The rotation of the new US forces arriving in Norway will last for a five-year period.

According to Foreign Minister Ine Eriksen Soereide, decision did not constitute the establishment of a permanent US base was not targeted at Russia.

“There are no American bases on Norwegian soil,” she said, adding the idea had broad parliamentary support.

At the same time, it’s clear that no matter how you describe US military factilities in Norway – premanent bases or temporary facilities – the US military presence near the Russian border is growing.

or get banged by them

Fear Fear Fear of Russians will always be in their bones and hunt them. And what if they are americans stupid kids there, they think that will help something, if something goes bad. LOL. Poland wants the same, well much more actually from Fear from Russia is paying the Washington $2 Billion to make permanent US base there in Poland. See what Fear does.

Well, everyone knows poles like to suck anglo-saxon cock…

Most of Europe has become Playstation4 Black Ops Heroes…10 push ups, 5 pull ups and a walk to the kitchen for your pizza is more than enough….

To me it doesn’t look much like fear of Russian aggression. I think they know as well as we know that Russia isn’t planning any invasion. To me, all of this looks like preparing for their own invasion on Russia in 2019/2020. I think they are counting that they have much more chances before Russia starts the serial production of S-500, Su-57, Sarmat, Avangard… and many others superior weapons, which are all sheduled for 2020!

In Norway there are US proxy in power.

This represents an inconsequential number of troops. It’s an understrength battalion that would be fed into the maw of overwhelming Russian forces, if anything was to kick off. They would be considered expendable. For my take, it is pure symbolism and represents nothing real. I wish well to all.

You demonstrate an understable ignorance, but this is kind of an esoteric field.

This is arctic war. The target area is Murmansk/Finmark/Lapland. The unforgiving, open, and expansive terrain does not allow mass armies but favors many small scale actions of local importance. For comparison, the fighting around what is now Pachenga in the Russian Civil War, the Winter War, and WWII never involved more than an overstrength division.

Remember that these troops augment local allies and form a ready reserve permanently camped in position. While this has modest significance to the grand scheme, it changes the situation greatly in the most isolated and remote part of Europe.

Ironically, if Hitler and Ribbentrop had the wit to allow the UK and France to invade then neutral Norway and Sweden in 1939 to aid Finland in the Winter War as Churchill wanted to do. (He of Gallipoli fame)…..The course of history would have drastically changed. UK and France would have been at war with Russia. Since the Reich was already at war, albeit phony with UK and France the likely outcome would have been Stalin joining the Axis Pact. This would have had for more strategic importance than the temporary loss of Swedish iron ore, or the loss of a lukewarm Finnish ally. Russia was already Hitler’s chief supplier of raw materials.

Instead Hitler threatened the Swedes into refusing the Allied request to transit their territory. Of course the Allies would have doublecrossed the Swedes and Norwegians and the “neutral transiting” would become a military occupation but that would be inconsequential in comparison.

Smaug, you are as dumb as a rock. Besides, I actually operated up there doing a NATO COLD EX. I know what goes down in the arctic kid. lol

Don’t tell people they are dumb because what you read in a book, makes you think you are smart. Buzz off Smaug.

Poser alert. Why do I always get stuck with the egomaniacs?!?!

So you admit you were lying about your military experience?

Dude, I served my time in the suck. I have spoken frequently about it in the past.

Your post was garbage Smaug. It was complete military unreality, combined with a smug and disrespectful attitude towards me. I don’t accept that. For instance, If you think Norway will support a tiny deployment, after they requested their protection though their presence, you are on drugs man. Second, that 700 Marines would be less than half the number of guys we landed in Narvik and Andslev. That was a time when, the Russians were penetrating Norwegian airspace twice a week on the regular. They were coming right through. You don’t know jack sparky.

That deployment, pfffft 700 guys, would be peanuts in the wind there you. They wouldn’t have the gear to properly defend themselves and the people who asked for their support, against a serious attack. This is purely a theatrical move by Norway and the Russians are rolling on the ground, laughing their asses off at it behind the scenes.

If you have your point of view, that is fine. But, don’t come after me when you don’t have 1 single clue about what you are talking about. So, go ahead and hit me with you nonsense, your dime is over. And again, buzz of Smaug.

I was always taught that God made all humans humans equal, and I see that you’re not stupid because you saw that my opinions were the product of long study.

However, your first instinct upon being corrected was to launch a derogatory tirade about how worthless I am and how awesome you are. You stick to your original statements and insist that I believe them because you say them. These are narcissistic tendencies.

Furthermore you pretend to be a veteran, but such liars are easy for actual vets to spot. You’re neither the first nor the last poser I’ve caught. Mute.

You are truly blind.

It’s very puzzling why these country leadership would want additional thugs frolicking about in their respective country ? They don’t even take care all their shit properly. Just to where their citizens should plight their cases when’s these thugs committed crimes against them ?

I read recently that these troops also went on training exercises with allies. Taking equipment (including tanks) from hidden arctic caves they traveled through Finmark into Finnish Lapland and joined a division of Finnish forces. The training simulated a theoretical Russian invasion of arctic towns and forests. And the new cold war goes on…

The norwegian PM is another social-marxist like Angela Merkel who actually looks quite a bit like a trans-gender man. Not enough vikings left in Norway either – they’re being demographically and ideologically invaded by the zio-masons. Not really surprising given that the Norwegian royal family are the same blue reptilian blood as the rest of the european “royals”

There are no UZ bases in Norway – only tanks in secret caves! Why do these politicos bother to say anything. Virtually every word is a lie!

The US/EU anti-Russia hysteric propaganda is scoring well in Norway, Sweden, Poland and the Baltic statelets.