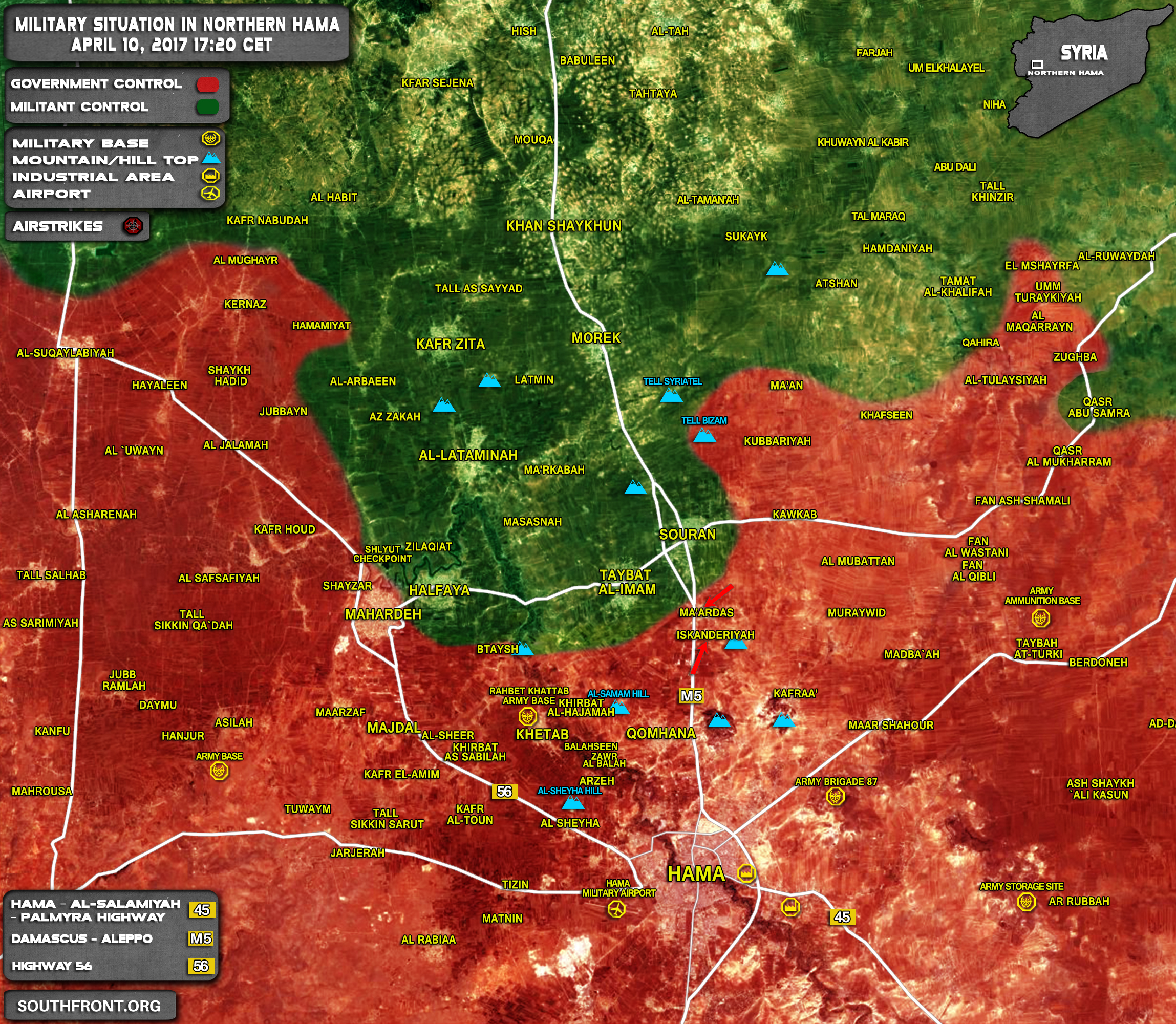 The joint militant forces led by Hayat Tahrir al-Sham (formerly Jabhat al-Nusra, the Syrian branch of al-Qaeda) repelled a government advance in the area of Halfaya in northern Hama.

The militants were able to keep their defense positions despte a stiff pressure from pro-government forces and multiple airstrikes made by the Syrian Air Force and the Russian Aerospace Forces. The Syrian Arab Army (SAA) lost at least 1 armoured vehicle during the April 10 attack.

Meanwhile, the SAA and its allies further advanced against Hayat Tahrir al-Sham (HTS) and its allies in the area of Maardes and Iskandariyah. Government forces had taken control over Maardes and Iskandariyah earlier today. Then, pro-government forces, led by the SAA’s Tiger Forces, attempted to advance in the direction of Souranl but were not able to make a significant progress. The HTS-led forces reportedly hit the SAA’s T-72 battle tank and launched a counter-attack. An intense fighting is ongoing in the area.

Pro-government sources say that government forces destroyed a battle tank, a shilka self-propelled gun, 1 armoured vehicle belonging to HTS and its allies during the clashes in the Maardes area. Up to 20 militants were killed or injured

SAA capture Souran and Taibat Imam first . Then Halfaya will be easy .

Attacking the most fortified positions head on to make incremental gains?

That could work with enough artillery and air support. Which SAA didn’t have even before us airstrikes. The introduction of tos1a system is why there were any gains on this front in the first place , but they need to triple the artillery units if they are going into a city like souran head on.

Those tos 1 buratino range is soo short that make saa uncomfortable to use in that area especially if that b*stard still had long range artilery on their disposal, tos 1 buratino more like besiege weapon rather than attack weapon unless they put more range to it even bm 30 smerch with thermobaric or fuel air explosive work better than buratino cause it had long range

The tos recently doubled their missile range to 10 or 12 km. But more reliance on artillery will be necessary, because the logical next step for trump is to ground the entire Syrian air force. He’s one chemical attack from doing that and Alqaida is happy to do it because they know trump will blame assad.

Yep but I dont know if they got that variant I thought that version just for russian only, hell to those b*stard, I believe getting blow up with that thing not different with getting blow with other in the end same roasted cockroach result

The SAA may be doing that to draw militants down from the north and center so they can have less resistance when moving in from the east and west to pinch off the salient. That maneuver would pull away militants from the southern sector which may allow the SAA to make greater headway retaking the towns and countryside.

You’re back? There were some folks here worried that you had been caught by tomahawk missiles or something… lol

Good knews, you’re always updating the status of some news here, thank you.

yea i thought that happened to him too, i saw him over on russia-insider.com, glad he is back

Northern Hama will fall entirely very soon, it will crumble within a week. That was a brilliant move I applaud the general designer. What happen Is they(SAA) managed to relocate the offensive bulk in the past 5 days in W.Aleppo and The offensive is actually there. So all militants reinforcements and main forces will start relocating North to West Aleppo. So within a week the defense in the region of North Hama will be zero.