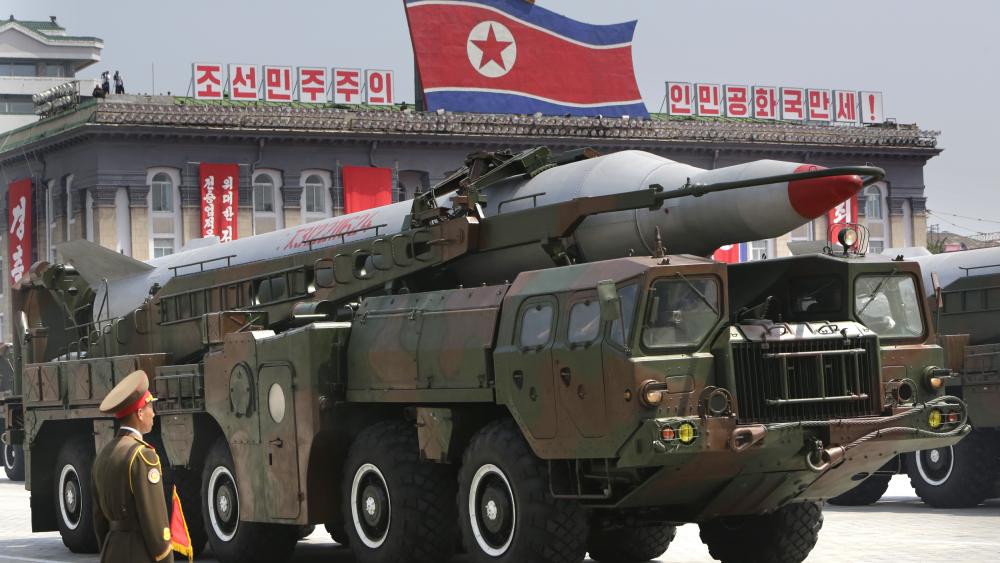 One day after South Korea press reported that US special forces, including a Delta Force team and the infamous SEAL Team 6 are participating in local drills, practicing the removal of Kim Jong-un as well as the infiltration and destruction of North Korea’s weapons of mass destruction, North Korea threatened the US with “merciless” attacks if an aircraft carrier strike group led by the USS Carl Vinson, which is currently taking part in joint South Korean drills “infringes on its sovereignty or dignity”, Reuters reported on Tuesday.

North Korea said the arrival of the U.S. strike group was part of a “reckless scheme” to attack it.

“If they infringe on the DPRK’s sovereignty and dignity even a bit, its army will launch merciless ultra-precision strikes from ground, air, sea and underwater,” the North’s state news agency KCNA adding that “on March 11 alone, many enemy carrier-based aircraft flew along a course near territorial air and waters of the DPRK to stage drills of dropping bombs and making surprise attacks on the ground targets of its army.”

Meanwhile, a US Navy spokesman told Reuters the Carl Vinson was on a regular, scheduled deployment to the region during which it would take part in exercises with the forces of ally South Korea. Last week, North Korea fired four ballistic missiles into the sea off Japan in response to annual U.S.-South Korea military drills, which the North sees as preparation for war.

North Korea’s warning comes as Secretary of State Rex Tillerson is due to make his first visit to South Korea on Friday. Last week, the U.S. ambassador to the United Nations said President Donald Trump’s administration was re-evaluating its North Korea strategy and “all options are on the table.”

As reported last night, and adding regional tension, China has been vehemently opposed to the deployment in South Korea of an advanced U.S. anti-missile system. According to the SCMP, a retired PLA general, Wang Hongguang, said that China is set to deploy anti-radar countermeasures which will neutralize the South Korean THAAD.

“We will complete our deployment before THAAD begins operations. There is no need to wait for two months [before the election of the next South Korean president],” he said on the sidelines of the political sessions in Beijing. “We already have such equipment in place. We just have to move it to the right spot.”

The United States and South Korea say the Terminal High Altitude Area Defense anti-missile system is for defense against North Korea, but China fears its powerful radar can probe deep into its territory and compromise its security. The United States began to deploy the system a week ago, a day after North Korea launched its latest four missile tests.

As a reminder, South Korean and U.S. troops began the large-scale joint drills, which are billed as defensive in nature, on March 1. The exercise last year involved about 17,000 American troops and more than 300,000 South Koreans. South Korea has said this year’s exercise would be of a similar scale.

Additionally, the United States has also started to deploy “Gray Eagle” attack drones to South Korea, a U.S. military spokesman said on Monday. China says the exercises do nothing to ease tension. Last week, it called on North Korea to stop its weapons tests and for South Korea and the United States to stop their drills.

A state-run Chinese newspaper said the USS Carl Vinson was taking part in a simulation of a preemptive strike against North Korea’s nuclear and missile facilities. The drills sent the North “an explicit radical threat”, to which it could not be expected to remain indifferent, the influential Global Times said. North and South Korea were “equally hysterical”, it said. “The U.S. and South Korea often accuse China of being uncooperative, but the reality is they are uncooperative over China’s mediation,” it said, referring to complaints that China does not do enough to rein in old ally North Korea.

Finally, the latest breakdown of US naval forces around the globe is shown below, courtesy of Stratfor. 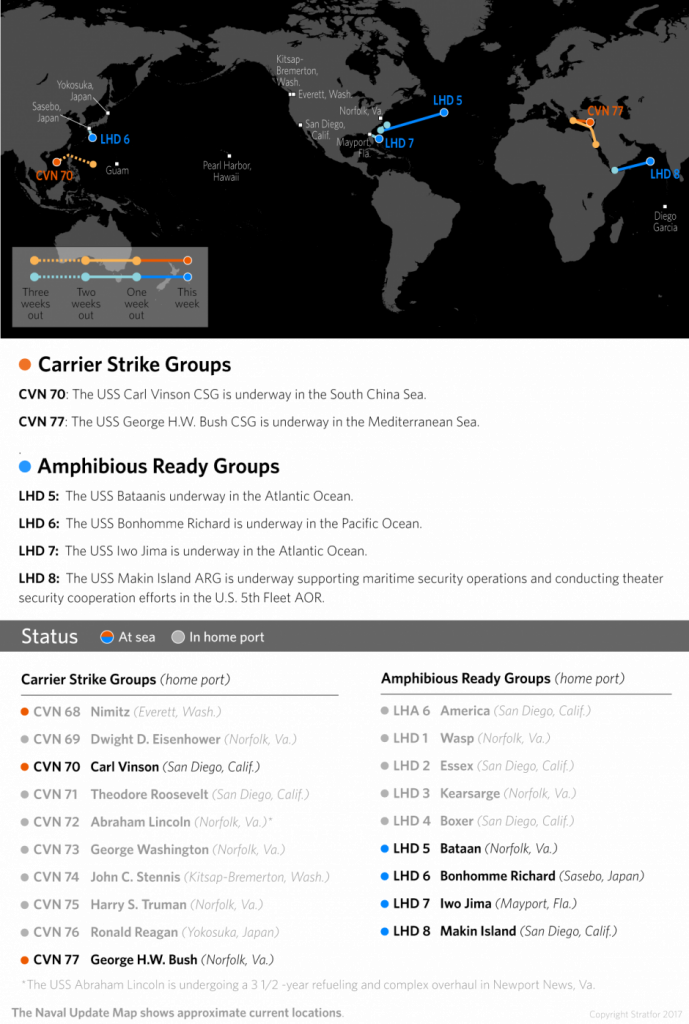 Why does the US show up with it’s military everywhere they go? To they have to do this every time?

It’s the only thing they have left. The US economy is in terminal decline and the Chinese are out competing them.

Perhaps North Korea for all its ills will give the US the bloody nose that many would say they deserve. The death of the 30,000 US troops in South Korea would be a salutary experience for the US and its civilian population who are rather too jingoistic for their own good.

Surely its time for the US to put its guns to one side and talk? As Churchill famously said :- Jaw Jaw is better that War War.

All titles of articles I read about North Korea on any news site are always wrong. The “misleading” title reads like “North Korea promises all out nuclear war just because aircraft carrier arrives” When in actuality what North Korea said was… “If the US invades our country, then we will fight back including with our missile arsenals”