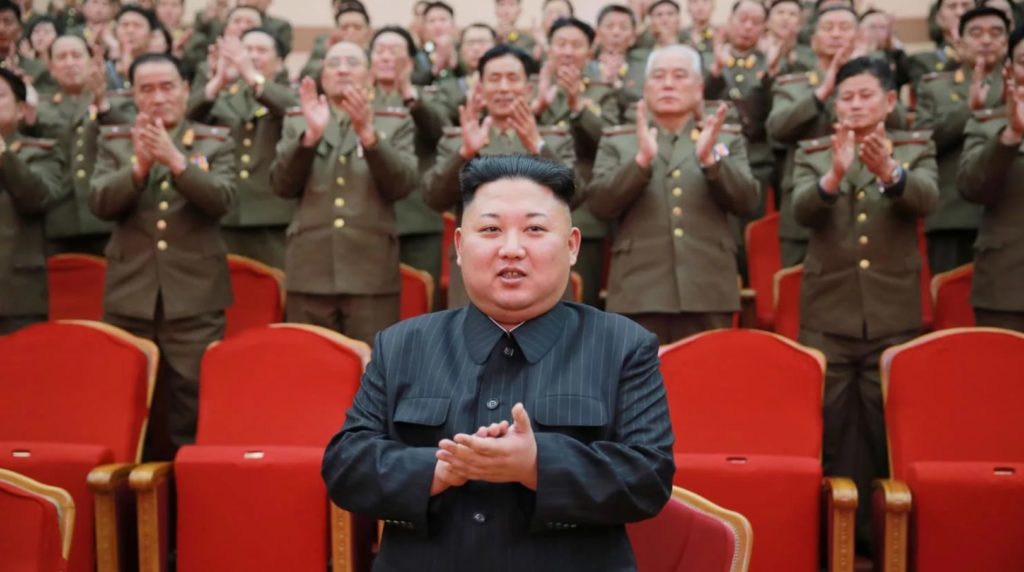 North Korea would reconsider its participation in the historical Pyongyang-Washington summit in Singapore planned for June 12, the country’s state-run news agency KCNA reported on May 16.

According to a press statement of North Korean First Vice Minister of Foreign Affairs Kim Kye-gwan, North Korea’s Supreme Leader Kim Jong Un stated that its country isn’t interested in any negotiations that envisage only unilateral denuclearization without guarantees.

Kim Jong Un criticized the “so-called Libya mode of nuclear abandonment” as this move hadn’t been an “expression of intention to address the issue through dialogue.”

“It is essentially a manifestation of awfully sinister move to impose on our dignified state the destiny of Libya or Iraq which had been collapsed due to yielding the whole of their countries to big powers,” the statement reads.

“It is absolutely absurd to dare compare the DPRK, a nuclear weapon state, to Libya which had been at the initial stage of nuclear development.”

Kim Jong Un called on US President Donald Trump to review their policy towards North Korea:

“If the Trump administration takes an approach to the DPRK-U.S. summit with sincerity for improved DPRK-U.S. relations, it will receive a deserved response from us.”

On May 15, Pyongyang cancelled the May 16 North-South Korean talks “in light of the provocative military” military exercises between the South Korea and the US, KCNA reported.

The large-scale 2018 Max Thunder joint air combat drill throughout South Korea started on May 11 and will last until May 25.

According to the KCNA report, the military exercise “is a deliberate challenge to the Panmunjom declaration and is a deliberate military provocation” and “reflects the unchanging attitude of the US and South Korea to continue ‘maximum pressure and sanctions’ against us.”

On May 15, a spokeswoman for the US Department of State Heather Nauert defended the right to conduct drills and pointed out that Washington would continue planning the meeting with North Korea’s leader:

According to a press release of the Ministry of Foreign Affairs of North Korea posted on May 15, North Korea’s government took “technical measures for dismantling the northern nuclear test ground of the DPRK in order to ensure transparency of discontinuance of the nuclear test”.

“A ceremony for dismantling the nuclear test ground is now scheduled between May 23 and 25, depending on weather condition,” the document reads.

On April 29, US National Security Advisor John Bolton stated that Washington “is looking at the Libya model of 2003, 2004” for North Korea to give up its nuclear weapons, according to the interview at the US TV channel CBS News.

In 2003, Libya gave up its nuclear weapons program under the “international community” pressure and transferred its nuclear weapons to the US. In 2011, the US and its NATO allies intervened Libya, backed an armed insurrection and immersed Libya into chaos.

Joe
Reply to  MADE MAKER

Point is American thinks they are the one calling the shots.. when it is mainly China that convinced NK to give up nukes (under of course the protection of China) .. NOT TRUMP or stupid BOLTON

Thomas Wolsey
Reply to  MADE MAKER

US see themselves like some kind of the Emperor of the world what give them moral authority above anyone and right to do anything.

Vince Dhimos
Reply to  MADE MAKER

Americans are incapable of empathy — they cannot put themselves in others’ places. There is a severe gray matter shortage in the US, Eventually, nations like this lose big time. They could become slaves of the people they persecuted.

Don’t lump all Americans in with our corrupt government. The American people are the most generous on the planet, check donations by country. Just because our government is run by servile bootlickers doesn’t mean the average American lacks empathy.

Is this by percentage of surplus income above cost of living? or an absolute number? since rich people giving more than poor people does NOT make them more generous!

https://i2.wp.com/smoloko.com/wp-content/uploads/forrestalMeme.jpg https://youtu.be/LVQn9wdMNu8 http://de.metapedia.org/m/images/5/50/Kerstin_Lorenz.jpg ZOG hit jobs ( the last photograph iss krestin Lorenz ) http://historyreviewed.com/index.php/2018/03/20/have-alicia-frischmann-smolokos-scottie-disappeared/ just informing where is Scot Spencer and Alicia Frischmann from smoloko.com ? they are probably either got kidnapped or kidnapped and assassinated by ZOGs for telling the truth. join http://www.gab.ai now they were gone since late january 2018 and 2 the same week zionist terrorists hacked smoloko twice and shut it down yet Scot managed to bring smoloko back online, who will defend smoloko now? I support christianity and european folk nationalism patriotism and american folk nationalism and patriotism . know don’t forget these germnan and austrian heros who were suddenly taken down by jews deliberately and those assasinations were with cover ups as to appear as accidents for the general public remember them : vice chancellor Jurgen Mollemann a good man who dared to speak out and oppose zionist war criminal mass murderer israeli ariel sharon then assassinaed by zog cia mi6 mossad in 2003 , and german politician Uwe Leichsenring was assassinated in 2006 in a deliberate traffic accident, and Jorg Haider spoke out against bankers mafia doing the economic burden 16 days before he was assassinated before his last day and a day before he was assassinated by shadow ZOG agents he made a powerful good speech that the evil luciferians didn’t like in 2008 and NPD german political party candidate leader Kerstin Lorenz who was assassinated in 2005 by ” brain stroke” . that what not an accident with mollemann’s parachutes , that was not coincidence accidents . and mossad bombed north korea in 2004 look it up. all these 4 events were assassinations in this ( 21st , 3rd ) century , millennium with cover ups to appear as accidents and a medical condition. the most logical scenario is that mossad was chasing haider and he was fearing for his life and excelerated the speed of his car and it crashed and then they went to him and finished their assassination job he would have been elected to be the austrian chancellor. look it up on duckduckgo or yandex http://www.metapedia.org is an alternative non lying online encyclopedia. boycott Zionist jews-owned merchandise , websites, start-ups,supporrters e.g. spot.im ,myheritage.com ben & jerry’s ice cream that was Kerstin Lorenz

If there is a failure , Bolton will be the man responsible with his ARROGANT remarks.. Really arrogant . He said NK must FIRST transfer all their nukes to USA before any concession!!!! This really is an idiot.

NK will surely give this chap their middle finger .

He also threw chemical weapons into the mix for the first time. When they do that you know that what they are really after is regime change.

My opinion is , North Korea should announce end of negotiation unless Bolton is out of picture.

I believe the world will force Bolton out to get NK to denuclearize after all US said they will not lift any sanction until NK fully denuclearize!! This is pure insult .

Then Bolton will not know where to bury his knuckle head

The problem is still that the US has a habit of not honouring past agreements and treaties.

Would you trust any US declarations Joe, if you were a president/leader of another nation ?

I am fairly certain that this not honouring agreements has already happened to North Korea. I will not repeat the details here but there was a failed agreement under Clinton/Bush. It was this failure that lead to the current nuclear development program .

I would never trust the word of any nation, especially if the leader who made the agreement has retired. People give their word, not nations.

Bolton is merely one of the actors on the stage. He will probably be the stalking horse used to sabotage any chance for a peace deal.

It’s all deliberate. They don’t want to loose the excuse of nuclear North Korea to encircle Russia and China in far east.

Breaking their agreement regarding the JCPoA just before their talks with NK signals the NK that “don’t make an agreement with us”, and Boltons says what he says just in case the DPRK’s rulers are slow.

The US doesn’t want a de-escalation in the Korean peninsula. It all boils to ABM and their “pre-emptive” [nuclear] attack strategy against China and Russia.

They do all in their power to not reaching an agreement with DPRK, mark my words.

Remember the installation of ABM systems in Poland, on the excuse of Iranian missiles (which didn’t have the range nor nuclear tip by the way)? It was intended for the Russian retaliation in case of an American preemptive attack on Russia. Just like the case with Korea

Well this time i hope it’s the US would be the one to walk away while the rest of party’s involved resumed their peace negotiations processes. China can uphold it’s obligations in keeping the NK connected to global market even if US threatened them with sanctions.

Fortunately for North and South Korea, the US doesn’t get to decide the future of the Korean peninsula. Bolton has prevented reunification once before. They should not let him be successfu successful a second time.

Bolton: “On April 29, US National Security Advisor John Bolton stated that Washington “is looking at the Libya model of 2003, 2004” for North Korea to give up its nuclear weapons” The problem the US has is that the world now has a model to base its decision on and no one trusts the US any more. Keep firing away, Kim. You know what happens to those who bend to Washington.

You can call me Al
Reply to  Vince Dhimos

Exactly. Libya agreed to the demands and sent all the nuclear stuff to the US as agreed; then the rest is history.

Also these war games are just taking the piss, NK has bent over backwards to accommodate the US demands and the SKs new damn well, that Asians admire a show of mutual respect + trust, but still went ahead with the war games with the Yankers.

It is a bloody disgrace, but many of us guessed the outcome of the peace talks, once the Yanks started pushing their wishes and bullying SK. To be honest, I am more disappointed in SK, as I think NK i.

Samantha Green
Reply to  You can call me Al

Why did Libya send the stuff to the US instead of Russia, China or France? Same for NK. Why would they give nukes to US when they could give, or sell, them to China instead?

My prediction. US will enter the negotiations as SK ally while China and possibly Russia enter as NK ally. US will demand complete disarmament and unrestricted inspection like Iran before anything offered from their side including calling off wargames. NK will reject them. Suggests mutual concessions by both sides and gradual removal of nuclear weapon for immediate partial lifting of sanctions with gradual complete reintegration with global market. US will rejected them. Threaten more sanctions or military options. China and Russia would suggests using the sucessful JCPOA or Iran deal format to be used. US reject them. Saber rattling start again. NK restarting it’s ballistic missile test.

I mean in the end if all goes smooth what guarantees can US give to the North Korea, so that N,K.,be satisfied, whatever guarantees he receives, how he would know that tomorrow that the US will screw him over. Yet again, the US cannot be trusted, who trusted the US got 100x more screwed.Don’t de-nuke Kim they will screw you over and will make your country Libya 2.0 or Syria 2.0. The US will bring home their soldiers and will leave there some paid proxies to stay on the place of the Army. I mean screw the US. Especially this Trump administration.