Earlier this morning we reported that according to Korea Times, China had allegedly sent North Korea what amount to a final warning over its military provocations. The rumor cited the May issue of Hong Kong monthly news outlet Dong Xiang. It said a Chinese Ministry of Foreign Affairs junior minister invited Park Myung-ho, an official of North Korea, for a meeting. China’s Foreign Minister Wang Yi attended the meeting and asked his junior to read aloud the warning to the North over the nuclear test. The memorandum mentioned that China will condemn strongly, pull back on all economic cooperation and even blockade North Korea if it conducted the test. 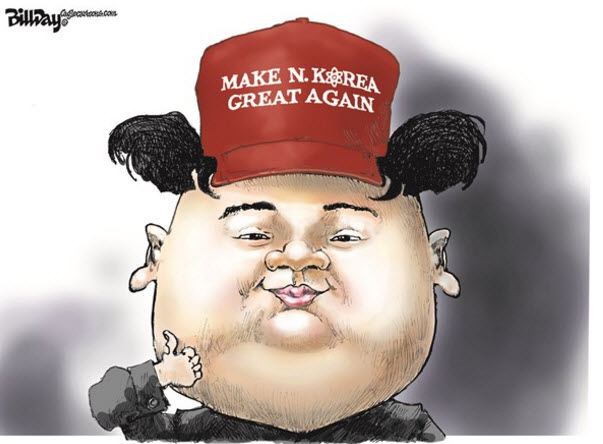 In an almost unprecedented criticism of China on Wednesday, North Korea’s state media said Chinese state media commentaries calling for tougher sanctions over Pyongyang’s nuclear program were undermining relations with Beijing and worsening tensions. As Reuters reports, a commentary carried by the official Korean Central News Agency (KCNA) slammed China’s “insincerity and betrayal,” referring to recent commentaries in China’s People’s Daily and Global Times newspapers, which it said were “widely known as media speaking for the official stand of the Chinese party and government.”

The response was terse and aggressive…

“A string of absurd and reckless remarks are now heard from China every day only to render the present bad situation tenser.”

“China had better ponder over the grave consequences to be entailed by its reckless act of chopping down the pillar of the DPRK-China relations.”

The KCNA commentary charged that the Chinese articles had attempted to shift the blame to Pyongyang for “deteriorated relations” between China and North Korea and U.S. deployment of strategic assets to the region. It also accused China of “hyping up” damage caused by North Korean nuclear tests to China’s three northeastern provinces.

Chinese state media calls for North Korea to dismantle its nuclear program were “a wanton violation of the independent and legitimate rights, dignity and supreme interests” of North Korea and constituted “an undisguised threat to an honest-minded neighboring country which has a long history and tradition of friendship,” it said.

North Korea’s “media” responded by explaining that the nuclear program was needed for the “existence and development” of the country and “can never be changed nor shaken.”

The bottom line is that the window for threading a diplomatic solution, brokered by China, is closing rapidly…

“The DPRK will never beg for the maintenance of friendship with China.”

It is so nice of you to inform us what Mr. Reuters has to say regarding things he knows nothing about and was caught time and again lying about.

I would not be surprised CHina backstabbing N.K or even Russia. China has over 1.3 trillion Dollars invested in USA in bonds and treasuries. Therefore they will not risk to loose the money and americans will use this to keep China on tight leash

Brilliant logic. China owes assets n US and that allows US to control China. It is shocking that even Mr. Dumb never got that far. Is there any money US invested in China? Or is there anything China could do to US should they decide to appropriate Chinese assets in US? What, you did not think so far?

Its a big show for the USA and Israel. It means nothing its just smoke and mirrors, it only matters if China stops supporting the North Koren economy which they have not stopped. North Korea is only targeted because Israel orders it since Israel thinks North Korea is helping Iran’s missile program.

let out IL from this issue

They already did that back in the 1990s.

Understandable that NK does not want to depend on them.

Its the other way around China has the USA on its debt leash because the borrower is servant to the lender. China is making its economy and military as strong and as independent as possible before the coming collapse for the Zionist global empires economy so China will suffer the least amount of damage, when the empire goes down. This North Korea stuff is all show like WWF wrestling, so the empire will be fooled if China were doing as you say they would collapse the North Korean economy, that is what counts and they are not doing that.

I believe this is done to de-legitimize THAAD in SK over time. SK will soon have an election, apparently there is a substantial potential for some NK relations friendly candidate to win? It may also very well be that there will be no more launches for a while and Chinese know this – NK scientists needed to return to the drawing table anyway.

I have a hard time believing that Chinese ever fold to US threats, they always look at the long term of things. US already backed off from attacking (they are scared of body bags on the news) so maybe this was China’s part of the deal, but in no way folding to any Trump threat.

People should fuss less about what nations say and focus more upon what nations actually do. For rhetoric does not necessarily equal actions. The Norks may huff and puff, but in the end they can’t do without China. But huffing and puffing in public makes for good posturing at home, even if in practice you basically cave in. After all, no nuclear test has so far occurred.

In this day of mass media, the well-fed one has to announce something. Do not take anything seriously, it is just verbal posturing. He knows that without Chinese trade relations, his country will fall apart like a cheap suit. Both China and South Korea would certainly not want millions of refugees storming their borders, so they placate him but remain vigilant.