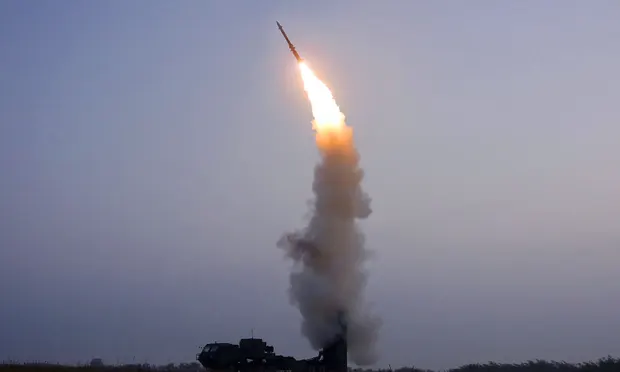 On September 30th, North Korea test-fired a newly developed anti-aircraft missile in what has become a regular occurrence in past weeks.

It was North Korea’s second known weapons test in the same week after launching a previously unseen hypersonic missile on September 26th.

The tests highlighted how North Korea has been steadily developing increasingly sophisticated weapons, raising the stakes for efforts to press it to give up its nuclear and missile programmes in return for U.S. sanctions relief.

The missile has new key technologies such as twin rudder control and double impulse flight engine, it said.

“The remarkable combat performance of the new-type anti-aircraft missile with features of rapid responsiveness and guidance accuracy of missile control system as well as the substantial increase in the distance of downing air targets has been verified,” KCNA said, citing the academy.

North Korea has said in recent weeks that its weapons tests are aimed at boosting its defence capabilities just as other countries do, accusing the United States and South Korea of “double standards” and “hostile policy” toward it.

On September 29th, Kim said he has no reasons to attack South Korea and was willing to reopen severed inter-Korean hotlines.

South Korea’s Unification Ministry, which is in charge of North Korean affairs, said the North did not answer the lines on October 1st but it vowed to continue efforts to restore the channels and resume talks.

On the same day, South Korean President Moon Jae-in, in a speech celebrating the 73rd Armed Forces Day, did not refer to North Korea but said he was committed to fostering lasting peace while sternly responding to any life-threatening action.

The US, the UK and France have called a UN security council meeting on North Korea, set to take place on October 1st. It was originally due on September 30th but was delayed by Russia and China, which asked for more time to study the situation, a diplomatic source said.

Still, this appears to be a way for North Korea to flex its muscles and boast of its non-nuclear progress, as well as a warning that its nuclear one could be similar. The United States seems to feel no sense of urgency to negotiate, while both Seoul and Pyongyang appear to be making steady progress in attempting to reach some sort of normalization.

Yes stand strong against the US axis of evil.

US will do whatever is needed to prevent a reunification of the Korea peninsula. There is no interest in a unified Korea from US geopolitical point of view. If a unification would happen, stationing of US Troops in Korea would be obsolete. Hence Korea would rethink, if they need to pay 1 billion US dollars per year for the US bases in country.

It is a new system and North Korea hasn’t named it yet. North Korea already has anti aircraft and missile defense system called Byungae (Lightening) -5, which is comparable to S-300.

Lol, You know the empire is fvcked if NK has a working hypersonic missile before the US.

And Russia and China will end up backing the U.S. once again against North Korea.

Don’t just blame the U.S.. Russia or China could have vetoed any of the inhumane U.N. sanctions passed so far yet they tucked their tails and fell in line.

Western nations led by the bloated imbecile trump had their chance with North Korea.

Their missile tech and military designs continue, unimpeded. The impotent american/british fools sit back and can do nothing.