While the world awaits more of North Korea’s attempt at attention-grabbing “explosive displays” following the dramatic televised explosion of the inter-Korean liaison office Tuesday, there’s been a reported build-up of NK troops along the the demilitarized zone (DMZ), according to new reports. Ships have also been observed entering areas along the disputed maritime border.

Pyongyang’s recent threats to mobilize extra forces have been made good on, apparently: “North Korea’s military appeared to be moving to the front lines near the South as a U.S. reconnaissance plane flew over the peninsula, following days of threats and provocations from Pyongyang,” UPI reports. 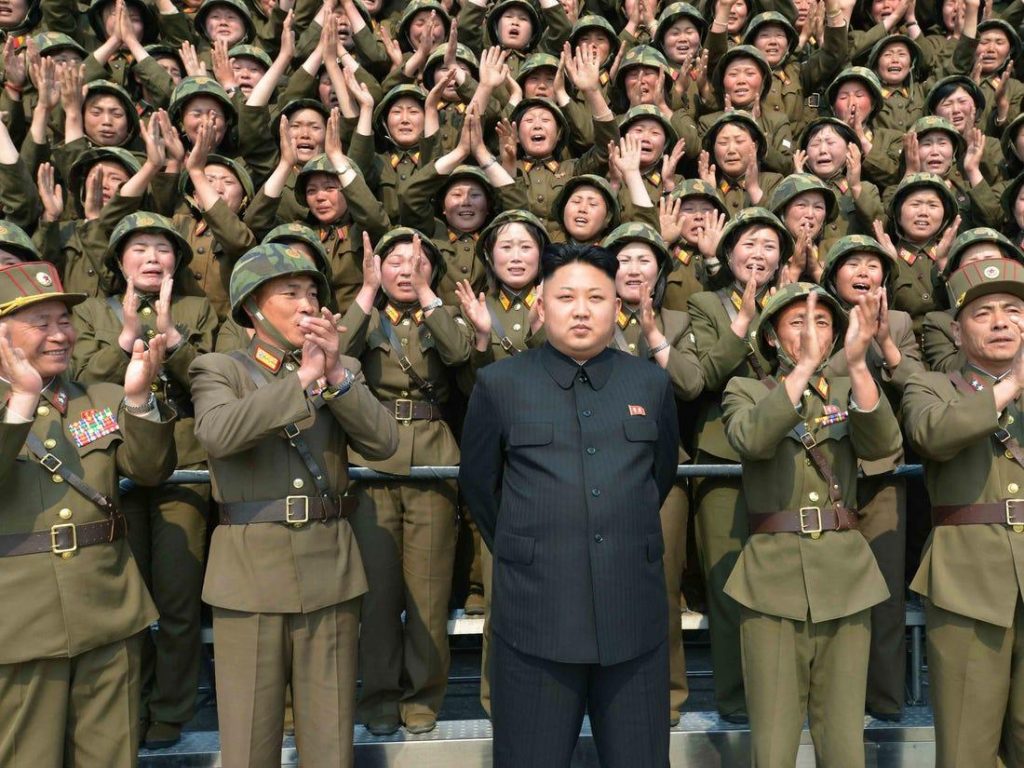 South Korean media and military sources report that “North Korean troops were stationed on the North’s side of the Korean demilitarized zones, at vacated guard posts of the tense border.”

Pyongyang’s latest saber-rattling is ostensibly related to an ongoing campaign of defectors spreading propaganda leaflets into the north via the border. Apparently in some cases activists are using balloons to transport messages into the north encouraging people to defect.

“On Wednesday North Korea had said it would retake vacated guard posts and take military action if North Korean defectors in the South continued to send anti-Pyongyang leaflets by helium balloon,” the UPI report adds.

Thus it appears Pyongyang’s troop movements, including what it says are elite units, are an attempt to make good on the prior threats.

North Korea releases pics of the destruction of the inter-Korean liason office.

It also comes amid disappointment at stalled – and what now appears to be completely failed – nuclear talks with Washington, which Seoul had previously touted as something it would help achieve.

South Korean diplomats have reportedly reached out to restore communications with the north but have been rebuffed. It’s widely believed that Kim John Un and his increasingly visible sister Kim Yo-jong, who has lately emerged as an outspoken military ‘enforcer’ of sorts, are seeking new leverage with the Trump administration, at a time sanctions are still in place with little openings forward.

Any ass lickers yet?

Did you know that when Israel bombed the Syrian nuclear reactor a decade ago, then some NK scientists also died in the attack? they also help Iran to have a nuclear bomb, with support from Russia and China. Look at the bright side Ranger, atleast a nuclear war will end the human kind.

I didn’t know that but Im not surprised. And thats a good thing?

Well, if you ask me it will come sooner or later. How many countries would get involved? nobody knows.

You could also argue thats its only due to nuclear weapons that we havent had WWIII yet. You know, the most effective weapons are the ones that never have to be used…

That is what I claim, it will be used eventually. I think you should already add Iran to this report: https://ploughshares.org/world-nuclear-stockpile-report

You think Iran already has it? Hm. Could be. But I dont think U.S., Russia or China are willing to nuke eachother. For what? And even if Iran has them and are willing to use it, that would be the last thing they did. Its much more worth to use it as a leverage.

Based on what evidence? This is nonsense. Anyways Every country should have nuclear weapons or none should!

Not sure if you posted it as a meme or you took it as serious.

Good on them, you can’t negotiate with snakes. I’m looking forward to seeing what they have in mind for October.

How can a war between two countries be good news? Why do guys like you enjoy death and destruction?

Says the globalist shill, don’t be so fucking hyperbolic, the only death and destruction happening there is that caused by the medieval siege imposed on the North. The gall of guys like you talking peace and love with a forked tongue in defence of the most brutal and insidious Empire in history.

NK is the most free country in the world, too bad you are a slave of the Internet.

How is all you wrote relevant to a possible war in the Koran Peninsula? Or it’s a reply that you copy and paste regularly regardless.

It’s relevant to your comment, as replies should be. You implied that North Korea strengthening it’s border positions was “death and destruction” which is hyperbolic nonsense. Don’t try and project your inability to think for yourself onto me you viper, you are the one trying to derail the conversation with tangential low effort accusations that avoid addressing the points of your interlocutor.

Is the liberation of South Korea from servitude to the Zionist banking syndicate at hand?

These may be the best of times for North Korea to make a move. The U.S. president is weak. Domestically the U.S. is politically fragmented and in a state of social and cultural balkanization. The U.S. president has repeatedly been reluctant to use military force. Threats have all been bluster. Isolationism and withdrawal are the new U.S. foreign policy doctrine. In its place are largely impotent economic sanctions. As important is that U.S. relations with China are at a nadir. China, with its heavy hand, would oppose a move by NK with no more than empty rhetoric. U.S. relations with traditional allies are at a low point as well. And, given the historical and recent track record, everyone knows that existing treaties and agreements with the U.S. aren’t worth the paper they are written on. Good luck SK. Thus, in combination with all these factors, the probability of any U.S. led unified international coalition to oppose a significant North Korean military action is at an historic low point.

“Is the liberation of South Korea from servitude to the Zionist banking syndicate at hand?” – I haven’t laughed so much in a long time. I hope your wishes come true and you and your family will live in a wonderful country like North Korea. LOL.

Where are you from ‘Free man’?

I’m guessing it is the “Land of the Free and the Home of the Brave” where they are burning books, banning movies, toppling statues and kneeling in groveling obeisance to anarchist mobs.

It is not my wishes, but the consequences of your inability to even defend yourselves against ignorance that are coming true.

Always think before you open your mouth that the joke is not on you.

What are you doing on the Internet, unplug it, get free of Imperialism

you must be communist

No, I’m a neo-confucianist

Don’t bother with me, then.

The possibility that South Korea wants to be liberated by North Korea is particularly funny. You want the dictatorship that starves its citizens, will “liberate” one of the world’s most advanced economic powers. Surely this is an exceptionally creative thought.

All government is dictatorship.

Apparently you missed the lesson on democracy. Or maybe that concept doesn’t exist in the country you live in?

Lol your country should try getting it out of the conceptual realm and put it into practice by fixing your broken Oligarchy.

No it doesn’t exist. First of all The United States is a Republic not a democracy. Second, I Very much doubt it exists in your country either.

Over here required 6 in 8yrs to do two term job what one man used to do at ease!Meantime ccp proved democratic india this centurys far more retarded! Ah democracy,what man shall not foresake his only son,for the sake of,well’

Click bait. No one cares if they’re retaking vacated guard post. Also, no mention of the estimated size of the build up.

What about Corona in North Korea? What happens when North Koreans dont get Bill Gates vaccine??

Then the North Koreans will spread Corona all over the world because they are still not vaccinated………..through the air. The answer is blowing in the wind. Therefore we have to nuke the whole place down, to save innocent American citizens.

As if there aren’t enough unnecessary wars right now.

Hear hear, the US should end the occupation of the South and let the two parties negotiate without coercion. Stop the illegal siege of Venezuela, stop pitting Ukrainians against their Russian kin, stop arming the Saudis for their brutal slaughter of Yemenis, stop supporting the Zionist parasites in their war on humanity as a whole and use the money to address the inequities being exploited to foment civil war in their own country.

I bet you will stop breathing first

I feared I might for a good portion of my life but things are moving faster everyday, I now have real hope that I may live to see the fall of the Empire.

Ohh you are such a rare animal

You’re way too logical, the US will never go for it.

So I guess this is your way of saying that fighting in the Korean Peninsula is a good thing.

No, that’s my way of saying exactly what I just said you slimy cunt. I’ll take your inability to address anything I actually say in deference to cookie cutter accusations and projections of your own failings as an admission of defeat.

Older than you I’m guessing from your infantile retorts.

Honestly. Kim was ignorant if he thought the U.S. would ease restrictions in turn for N.K. concessions. The U.S. is a satanic nation. Believe me, I live there. And the whole world seems to want what the U.S. has. Reminds me of Revelations 13:4

It is indeed now or (maybe) never for NK – the sub-trolls notwithstanding.

North Korea is one of a handful of nations that are free from the world government or least semi independent.This does not make this government a good government but it does make it independent to some degree.

there r excellent reasons why North Koreans a civilized collectivist people where individuality exists, support their government–universal health care, 99% literacy….of course 40% of amerikans can’t read above the 5th grade level and 69% of their university grads are not English proficient per the US dept of Ed…..they have never bothered to illegalize marijuana, etc—unlike the amerikan colony South Korea…before the amerikans colonized Albania.kosovo these people did not permit gangs and clans to engage in murders revenge and the organized crime–these gangs r now a problem in Italy as are the Algerian gangs in France, the Palestinian gangs in Denmark, etc…today the amerikan ruling class r legalizing illicit drugs–flooding the US w cocaine, heroin, etc—keep those peasants narcotized