North Korea has again been observed moving several missiles from a rocket facility in the capital Pyongyang, according to a report late on Friday by South Korea’s Korean Broadcasting System (KBS) rising speculation that the North is preparing to take more provocative actions. The last time a similar report emerged was at the start of September, which was followed just days later by a ballistic missile launch which flew over Japan.

As previously reported, South Korean official have speculated that the North could launch another nuclear or missile test to coincide with the anniversary of the founding of its communist party on Oct. 10, or possibly when China holds its Communist Party Congress on Oct. 18. Meanwhile, US Pacific Command revealed on Friday that the US and South Korea had recently completed their first joint short range air defense training exercise in South Korea, though it did not say when or exactly where the exercises had taken place.

Separately, on Saturday Secretary of State Rex Tillerson acknowledged for the first time that the US is in direct communication with the government of North Korea over its missile and nuclear tests – a stunning revelation considering that administration officials have until this point insisted that there has been only limited, indirect contact between the White House and the Kim regime. According to the New York Times, Secretary of State Rex Tillerson revealed as much during a speech at the residence of the US ambassador to Beijing after a meeting with Chinese leaders. Tillerson is in China on Saturday for what the NYT described as a “brief visit.”

“We are probing, so stay tuned,” Tillerson said when pressed about how he might begin a conversation with Kim Jong-un, the North Korean leader, that could avert what many government officials fear is a significant chance of open conflict between the two countries.

Tillerson wouldn’t say if the North Koreans had responded to the US’s overtures. 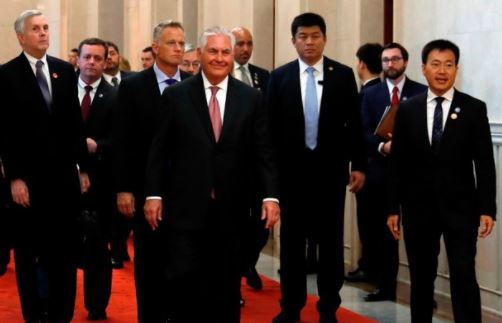 After noting that this was the first time a US official had confirmed that the US was directly communicating with the North, the NYT compared the secret backchanneling to a strategy used by the Obama administration to help forge what became the Iran deal – a comparison that Tillerson swiftly pushed back against. “We are not going to put a deal together with North Korea that’s as flimsy as the one in Iran,” he said. He added that the situation is different and that the North already has nuclear weapons, while Iran was still years away from obtaining them.

“We ask, ‘Would you like to talk?’ We have lines of communication to Pyongyang – we’re not in a dark situation, a blackout. We have a couple, three channels open to Pyongyang,” he added, speaking at the residence of the US ambassador to Beijing after a meeting with China’s top leadership. He would not say if the North Koreans had responded, beyond a heated exchange of threats in recent weeks. Trump has repeatedly threatened to “totally destroy” North Korea, while the North has threatened to conduct a nuclear test over the Pacific Ocean, and to shoot down US aircraft flying in international waters if they come uncomfortably close to North Korean territory.

When asked whether those channels ran through Chia, he shook his head. “Directly,” he said. “We have our own channels.”

Tillerson added that the most important thing was to lower the tensions between the two countries.

“I think everyone would like for it to calm down.”

Reactions to the admission of bilateral contacts were mixed: that the United States would be in contact with North Korea is not surprising, said Narushige Michishita, director of the Security and International Studies Program at the National Graduate Institute for Policy Studies in Tokyo, “But it sounds a little too early.”

“The timing is unexpected,” he said. “It was perfectly clear that both North Korea and the United States, and others, are in the prenegotiation bargaining process.”

Meanwhile, in Japan, where Prime Minister Shinzo Abe recently dissolved the lower house of parliament and called a snap election, the news that the United States is already in direct contact with North Korea could give ammunition to Mr. Abe’s opponents. The Japanese leader has steadfastly maintained that it is not the time for dialogue, arguing in a recent Op-Ed article in The New York Times that “emphasizing the importance of dialogue will not work with North Korea.” “Now,” Mr. Michishita added, “the opposition party members can say ‘Look, you have been talking about pressure, but the U.S. is just leaving you behind.’ ”

Needs to see confirmation from NK before one can believe what the US claim. Communicating with Twitter is not the way to go.

I hope the Koreans are able to push the colonizers into the sea! http://ihr.org/