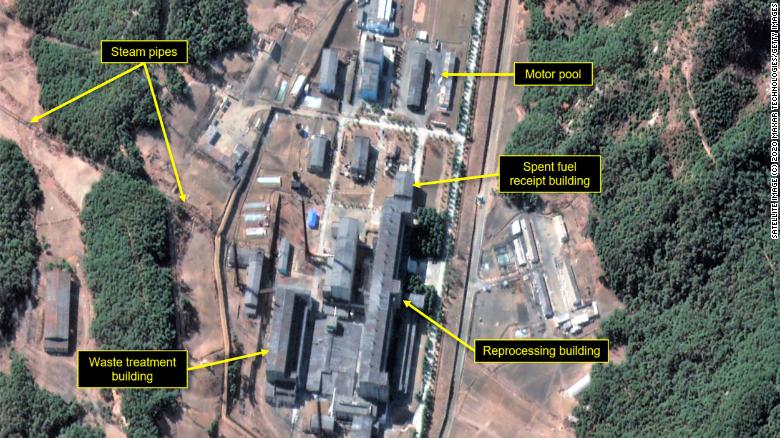 North Korea seems to have restarted operation of its 5MW (e) reactor and the Radiochemical (reprocessing) Laboratory.

The reactor is believed to have produced plutonium for nuclear weapons.

The International Atomic Energy Agency has had no access to North Korea since Pyongyang expelled its inspectors in 2009. The country then pressed ahead with its nuclear weapons programme and soon resumed nuclear testing. Its last nuclear test was in 2017.

“There were no indications of reactor operation from early December 2018 to the beginning of July 2021,” the IAEA report said of the 5-megawatt reactor at Yongbyon, a nuclear complex at the heart of North Korea’s nuclear programme.

“However, since early July 2021, there have been indications, including the discharge of cooling water, consistent with the operation of the reactor.”

Back in June, the IAEA said there were indications of possible reprocessing work to separate plutonium from spent reactor fuel that could be used in nuclear weapons.

IAEA Director-General Rafael Grossi said in June that the duration of activity at the lab was consistent “with the time required for a reprocessing campaign.”

However, Grossi said it was not possible to confirm that reprocessing was taking place. IAEA inspectors were kicked out of North Korea in 2009, and the agency has been forced to monitor the country’s nuclear facilities remotely.

That report said the duration of that apparent work – five months, from mid-February to early July – suggested a full batch of spent fuel was handled, in contrast to the shorter time needed for waste treatment or maintenance.

“The new indications of the operation of the 5MW (e) reactor and the Radiochemical (reprocessing) Laboratory are deeply troubling,” it said.

There were indications “for a period of time” that what is suspected to be a uranium enrichment plant at Yongbyon was not in operation, it said.

There were also indications of mining and concentration activities at a uranium mine and plant at Pyongsan, it added.

“The continuation of the DPRK’s nuclear programme is a clear violation of relevant UN Security Council resolutions and is deeply regrettable,” the agency said.

The Yongbyon nuclear complex is an ageing facility about 100km north of Pyongyang that once was the only source of its fissile material.

It produced out roughly enough plutonium each year for one atomic bomb.

Since then, however, North Korea has used uranium enrichment as the main source of fissile material for weapons. According to some, enough material is being produced for 6 nuclear bombs per year.

North Korean leader Kim Jong Un purportedly offered to dismantle the Yongbyon complex in exchange for sanctions relief during negotiations with former US President Donald Trump in Hanoi in 2019.

However, those talks collapsed in part because neither side was willing to budge. Trump’s team wanted either ballistic missile or other nuclear sites included in the deal, and Kim refused to accept a trade of Yongbyon for partial sanctions relief, according to former National Security Adviser John Bolton’s book.

Like Iran my ass. Iran hasn’t been nearly as mistreated as North Korea.

We could actually have a contest for ‘who has been mistreated the most by the United States’ and it would be a rather large list. I wish there was a prize we could give for 1st, 2nd, 3rd place. The contestants are, in no particular order … N. Korea, Iran, Syria, Venezuela, Yemen, Cuba, and Lebanon

I could add Russia and China to the list but perhaps we should exclude countries once they exceed a certain size. All of these countries have had their property seized without any due process, their currency destroyed, and GDP diminished from being denied global markets.

It is not the law of the jungle.

North Korea is one of the greatest examples of resistance, willpower and success in the face of the worst persecution any country has ever had to face.

So for 3yrs, N. Korea did not produce any plutonium and they also froze all long range ballistic missile tests and the Neocons in the U.S. bleated that ‘we got nothing after legitimizing them when Trump visited Kim’. In fact, we kept all of our starvation sanctions in place, added new ones, and confiscated tankers because of the student who ended up dying accusing them of torture (without any forensic evidence).

We are so narcissistic. As if the glow of a visit is so precious that the mere touch of our garment is worth 3yrs of concessions from N. Korea without anything else from us except hatred and scorn, ‘WE GOT NOTHING!’

We are such a sick, demented people.

Your people can be great, there are, and I know, so many great Americans, despite what some would have us believe. But your government has been hijacked a long time ago, and the controllers have managed to stay in the shadows. They are the truly sick ones. Time to change that.

It wasn’t even ever stopped. Just step up brotherhood of free World.