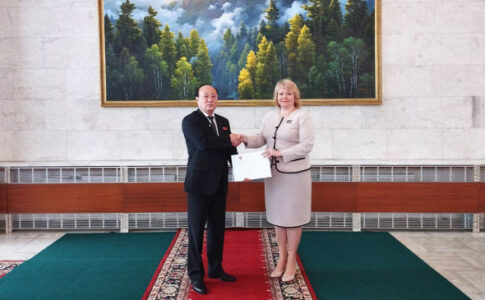 The document on the decision to recognize the independence of the republic was handed to the DPR Ambassador Olga Makeeva by the North Korean Ambassador to Russia Shin Hong Chol. The parties also agreed “on further steps to establish diplomatic relations.”

“The note was sent on behalf of the Minister of Foreign Affairs,” the North Korean embassy said.

Earlier, the head of the DPR Denis Pushilin announced the recognition and thanked North Korea “for such a significant support of the residents of Donbass,” noting that such a decision would serve as “a basis for further development of relations in the economic sphere.”

In addition to Russia, the sovereignty of the republics of Donbass was recognized by Abkhazia, which is a partially recognized state, as well as Syria. Kiev broke off diplomatic relations with Damascus.

of course, very good news. why don’t you build a railroad Mariupol – Phenian? only to connect 2 lands which belong (or will belong sooner or later) to Russia? and have a basketball macth with mr. Kim god bless his socks. socks bloody socks.

Natalya, don’t run ahead of the locomotive! Everything has its time. Putin knows what to do, no doubt!

Iren, do you fantasize about Putin dressed in cape and sword, like Yuri does?

Natalia dont eat Bugs its too much climate change !!!!

aka22
Reply to  Natalia Guberna

Beijing is building that road already. Ever heard of the Belt Road Initiative?

Yes its good news, but more it’s normality for these small countries after years of abuse from the Ukrainian Nazi piss. The Western coup instigated a civil war in Ukraine. The results of that coup haven’t fully played out yet. All we know is at the moment we are moving to more and more areas being liberated from the Ukrainian Nazis, and more and more of the world becoming brave enough to fight western oppression and stand up for sovereignty and peace against western supported Nazis.

LPR and DPR should invite Syrian and N Korean troops to police the civilian areas to maintain peace and order while the Donbas troops were still busy fighting the ukroNazis.

of course, very good news. why don’t you build a railroad Mariupol – Phenian? only to connect 2 lands which belong (or will belong sooner or later) to Russia? and have a basketball game with mr. Kim god bless his socks. socks bloody sock.

such a railroad would be popular among Western Touris. The new Transiberian XXL. I would ride on it myself.

Natalia are you working on railroads or you talk to Hunter ???

Brave little country, always fight against the Empire when the rest of the world serve and obey. NK shot down U.S. spy plane, they captured U.S. ship, they just don’t give a fuck for Anglo World Order.

And they loathe the vile Zionist Israeli scum.

However, they can drink a 2 gallon serving of Diet Coke and a triple order of Big Macs and X-Large fries in 5 minutes farting the whole time. That’s quite something to be proud of.

Have North Korea recognized Hong Kong and Taiwan? Didn’t think so, so the virtue signaling and corruption needs to shake hands and fake smile for the cameras while oppression of their nations people continues. When will the Imam or any middle America military dictator be on picture to recognize dumbass, next week?

When did Hong Kong declare independence you drooling imbecile?

The United Nations gives legitimacy to a newly created state, not the number of states that have recognized that new state. From the legal side, DPR, LPR, Republic of Abkhazia and Republic of South Ossetia have the same legitimacy as Kosovo. Crimea decided to join Russia in a referendum, which is in accordance with international law. Kosovo was separated from Serbia by the decision of the “Kosovo Parliament”, which is contrary to international law. DPR, LPR, Kherson, and probably Zaporozhe, Nikolaev, Odesa and Kharkov will be annexed to Russia by referendum, which, as I said, is in accordance with international law. Don’t be mad at me for writing this, don’t be mad at the Russians for their actions, that’s the law… ask why America and the EU didn’t respect international law when they took Kosovo, why wasn’t a referendum held?

I’d like to point out 2 things: 1) When Gutierrez met Putin to negotiate the evacuation of civilians from Azovstal, Putin mentioned to him that he read very carefully the decision of the advisory opinion of the International Court of Justice on the Kosovo case that concluded Kosovo hadn’t violated International Law, and used it as precedent for the case of Crimea. Gutierrez replied that the UN haven’t recognized Kosovo, and Putin said that still there’s a court precedent. (of course, when the USA and EU didn’t accept Crimea’s declaration of independence, they claimed Russia’s soldiers were there and no international watchers were present)

At the St Petersburg International Forum 2022, the President of Kazakhstan said they don’t intend to recognize DPR/LPR (Pushilin was among the audience – he must have felt awkward that even Russia’s allies didn’t follow Russia in this) and also that people’s opinion in his country is divided because the UN Laws seem to contradict themselves. (stable borders vs separatism)

2) Even if legitimacy hasn’t been given to a country by the UN, what does it matter in practical terms, when Kosovo participates in Eurovision, has trade with countries that have recognized it, wants even to become a partner of NATO? Yes, it supposedly can’t participate in international organizations, but it even participated in the Olympics, for God’s sake!!! Maybe the fact the UN haven’t recognized Kosovo isn’t as important after all… Or maybe even the International Law that Putin and Lavrov hold so dear isn’t set in stone. Or maybe the judges aren’t impartial as they should be!

Kim want’s to remind the USA that he is still there i guess.

It’s pointless to do this since the republics will not be able to exist without russian permanent help. At this point it is probably better to just take the whole damn country.

Now DPR and LPR can import weapons or other technology from Norh Koreea.