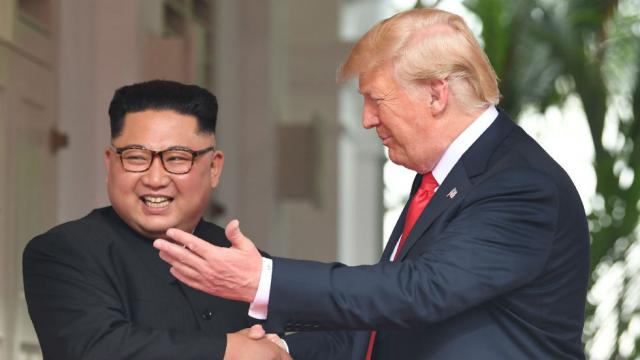 North Korea has received a list of 47 demands from the US, which it has to fulfill to ease sanctions pressure from the US, Japanese Foreign Minister Taro Kono said in an interview aired by national broadcaster NHK on June 17.

The foreign minister claimed that this includes a full elimination of the nuclear stockpile, other weapons of mass destruction, missiles and relevant infrastructure.

“The supreme leader of North Korea agreed to full denuclearization. US Secretary of State Mike Pompeo said during his visit to Pyongyang that, according to the United States, this notion includes elimination – in the transparent and irreversible form – of the nuclear stockpile and other types of weapons of mass destruction, including chemical and biological ones, as well as missiles and all relevant infrastructure,” Kono said. “In this regard, a list of 74 demands was submitted to North Korea. If the demand for full denuclearization is not carried out in this form, sanctions against North Korea will not be lifted. I think they [North Korea] understand this.”

Kono emphasized that that the missile arsenal and infrastructure of North Korea also has to be eliminated.

As to security guarantees to North Korea, the minister said they are yet to be finalized.

“They can be given in the form of a document, which states that the United States will not attack North Korea, cross the 38th parallel and topple the existing regime,” Kono said. “Guarantees may be given within the framework of a multilateral structure as well. This matter is yet to be discussed.”

According to the foreign minister, the reduction of the US military presence in South Korea is not a matter of the discussion at the moment.

Notrh should not trust this racist US zionist state they are inder influrnce of israel. once north give up the weopeons .Israel will defenetly look for every excuse to attack north. bcuz North is anti israel/zionist. North should keep only 3 demands . 1. Denuclerastion of israel. 2. withdraw all US force from Korea and 3.All Sanction to be lifted otherwise no country in northeast will support North korea if US break the agreemant and attack North specially japan and south korea bcuz they are slave

NK what has common with IL??

American troops are in South Korea because the legitim goverment asked them.

“no country in northeast will support North korea” what is this? which countries??? northeast is only Nippon.

“NK what has common with IL??” Both ruled by reckless criminals.

“North[K] should not trust this racist US Zionist state”

Don’t worry, KIM doesn’t trust anybody :)) KIM just won some TIME and Trump made a PR-trip to have something pompous to tweet and to “put aside” N-Korea, because Israel asks him to accelerate the war-preparations with IRAN. Don’t you already know Teflon-Don? The “J€vv-Yorker Boris Yeltsin” lies even when he sleeps.. And POMPEO is a totally IDY0T, you can see that he’s a CIA-breed.

Dajew wants to get into north korea pretty bad as NK has the most rare earth minerals in the world. And as a added bonus if dajew successfully enslaves NK(via debt and western “amenities”), then they will also be on chinas front door and on a path to infiltrate china too.

NK has the most rare earth minerals in the world

All of them., Itzig And don’t play stvpid, cause you’ll remain like this..

Rabbi, do not drink so much!

Dajew, or Uncle Samuel as he is known in polite company, wants to keep the Korean peninsula under American control, and stop it becoming part of the growing Eurasian empire.

aside from the PROPAGANDA Dumbing down THE SHEEPLE

Who really RUNS THE WORLD?????

All bad things that happen in the World, can be narrowed-down to these two: https://photos.vanityfair.com/2015/03/24/551185abd34b741011012670_t-jacob-rothschild-david-rockefeller-charlie-rose-cop.jpg ……….. https://pics.onsizzle.com/new-boss-oldboss-thefreethoughtproject-com-same-owners-wakeup-timetoawake-president-12605591.png

meet their brothers They also take young innocent girls and use them,make money on them and destroy them (really a Satanist ritual) and then say it was SUICIDE…. SUICIDE or SUICIDED?????????????????????? yeah they hung themselves by a door nob the list is long and While everyone knows WEINSTEIN……..very few know his family..also SATANIST CHILD SEX TRAFFICKERS and FUCKERS..here you see a beautiful young woman molested by these PIGS and USERS and a WEINSTEIN

Or, you could send this shortened and more clear demand: Bend over and try to enjoy or not!

Yeah, another list of impossible to fulfill demands, a known guaranteed way to not make peace, as old as history itself.

Hah! Ayastollah, your country is satans land! Your football player kissed the ball (blasphemy!) and the moroccoan player shoot own gial. Witchcraft. So, in Iran the dark forces rule.

Ah Solomon, how happy I am to see you! How’s wifey?

I can even kiss you and still not committed blasphemy, let alone a ball. And the Moroccan #20 is now considered a national hero for us!

I hope your sarcastic….otherwise my cat can write something better.

Or even better, wait until they do disarm, and then invade and take over like they did to everyone else capitulating to disarmament. While the terrorists state of Israel holds on tight to their nukes.

Hopefully Trump will be another Stalin, and after having collaborated with the evil Jew cult will turn on them and get rid of 6 million American Jews like Russia and Germany did. Judaism should be outlawed and the synagogues and yeshivas permanently closed and Israel delisted from the UN and replaced with Palestine to humanely dejudify our planet so that there are no more Jews and we have a Jew free planet that will be much better for humanity. Then we’re going to have far fewer Jew world order enemy fabrication hegemony problems like Korea, Russia, China, etc.. These people aren’t America’s or humanity’s enemies. The Jews are America’s and humanity’s number 1 problem and enemy.

http://www.informationclearinghouse.info/49654.htm “Israeli Lawmaker Proclaims Supremacy of ‘Jewish Race’” Likud’s MK Miki Zohar says are the smartest in the world, so know Netanyahu is’t corrupt … _________ I lived to read this Zion-idy0cy, too ! So nothing that comes from that scvmbags can surprise me anymore..

“North Korea Received 47-point List Of Demands From US” And how many points were on the list received by Trump from CHINA?… Oh, sorry, I meant North-Korea… (SIC!)

Everyone , please note that japan was sidelined during the Summit , precisely because japan lobbied trump not to go to the summit and trump took the advice and cancel the summit.. Only because South korean leader threaten to go ahead with their own talks with Kim , that trump suddenlu agreed to meet Kim in singapore.

Japanese right wing govt been against the korean peace summit , and even now after the summit japan still sidelined by every party involved.

the rethoric and lies coming from japanese govt via their media propaganda showed how they abhor south/north peace and how they want US military to stay in japan because of north korean threat,

one thing japan fear most , is a resurgent south korean and north korea cooperation , leading to reunification (without war or anything).

i think the japs prefer NK and SK go at it and destroy each other.. because the japs hate korean people and consider them as below japanese.. well actually japs think they are superior to other asians..

Japan gave the rule of its country to the USA at the end of WWII, Uncle Samuel is Shogun.

The talks will fail. Showing too eager to make peace , you get complete surrender terms.

So what? NO one can do anything about it. And me thinks the world already knows.

“”According to the survey results:

The US was the overwhelming choice (24% of respondents) for the country that represents the greatest threat to peace in the world today. This was followed by Pakistan (8%), China (6%), North Korea, Israel and Iran (5%). Respondents in Russia (54%), China (49%) and Bosnia (49%) were the most fearful of the US as a threat.

Interestingly, Iran was seen as the biggest threat by Americans, Canadians and Brits, “”

Please note that Canadians and Americans are fluoridated stupid.

And lets not forget, the Americans are only the globalists hammer….”thors hammer” as it were. The bankster/globalists rule.

Hope the Whores were paid well, do not look for another party Trump.

The empire-in-decline can present any list it wants, China & Russia have decided that NK deserves sanctions relieve. In fact, following that last round of sanctions NK was already getting supplied a bit through the backdoor, and will continue to be supplied that way, even more so.

The one and only effective security guarantee for North Korea is to keep its nuclear bombs.