According to North Korean media, the country has conducted the 5th nuclear tests of warheads that may be mounted on its missiles. 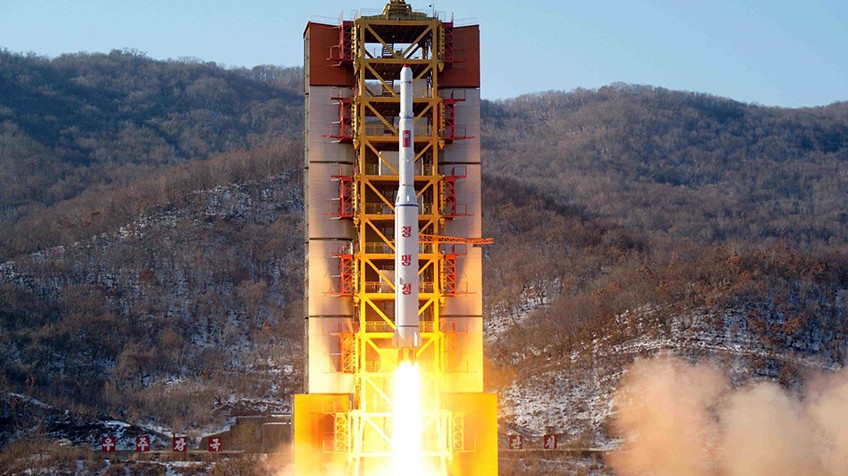 North Korean missiles may be equipped with nuclear warheads, the North Korea‘s Central News Agency (KCNA) reported on Friday, citing Pyongyang’s officials. According to the news agency, a nuclear test of the warheads was successfully held on September 9.

As KCNA reported, through tests, Pyongyang was able to assess the potential of nuclear power, as well as to specify the features of “standardized” nuclear warheads that may be installed on “strategic ballistic rockets.”

Unfortunately, war against N Korea is in time more likely than not.

It is also worth observing that according to N Korean statements, a state of war (albeit not yet in a kinetic/military conflict phase) current exists. U.S. economic warfare operations (an aspect of broader destabilisation/regime change operations geared primarily towards engineering an internal collapse) have transitioned the situation into a state of war. N Korea has stated the latest sanctions were a “declaration of war” and that “all matters between the two countries will be handled under its wartime laws.”

The U.S. is also uncompromising in its regime change objective and is developing operational plans for a ‘military option’ if other mechanisms to engineer an internal collapse of N Korea prove ineffective. Ongoing military exercises simulate the implementation of such operational plans.

“The annual joint US-South Korean military exercises known as Ulchi Freedom Guardian (UFG) began yesterday amid rising tensions in Asia fuelled by the American military build-up throughout the region. While nominally aimed against North Korea, the war games consolidate Washington’s military alliance with Seoul as it makes preparations for conflict with China…… Last November, the US and South Korea formally adopted a new military strategy—Operational Plans 5015 (OPLAN 5015)—that is explicitly offensive in character. In a conflict with North Korea, US and South Korean forces would make pre-emptive strikes on key targets, including nuclear facilities, and carry out “decapitation” raids to assassinate high-level officials, among them North Korean leader Kim Jong-un. OPLAN 5015 provides the framework not only for the UFG war games, but also the Soaring Eagle exercises currently being carried out by the South Korean Air Force, involving some 60 military aircraft and 530 troops. According to the Korea Times, the air force is practising to “pre-emptively remove the North’s ballistic missile threats by proactively blocking the missiles and their supply route…… The most significant move, however, was the announcement last month that the US will station its Terminal High Altitude Area Defence (THAAD) system in South Korea as part of its anti-ballistic missile network in the western Pacific. THAAD, which can intercept and destroy ballistic missiles, is not aimed primarily against Pyongyang, but against Beijing. It is part of US preparations for nuclear war with China….” (US-South Korean war games inflame Asian tensions, WSWS, 23 August 2016)

There is understanding in N Korea of such U.S. preparations and the state is responding accordingly: (refer p2)

p2. “Han Song Ryol, director-general of the US affairs department at North Korea’s foreign ministry, said the US move to put North Korean leader Kim Jong-un on its list of sanctioned individuals and other recent actions have put the situation on the Korean Peninsula on a war footing. Han said US-South Korea military exercises conducted this spring were unprecedented in scale, and that the US has deployed the USS Mississippi and USS Ohio nuclear-powered submarines to South Korean ports, deployed B52 strategic bombers around South Korea and is planning to set up the world’s most advanced missile defense system, known by its acronym THAAD, in the South….. Han said North Korea believes the drills reportedly now include training designed to prepare troops for the invasion of the North’s capital and “decapitation strikes” aimed at killing top leadership. “Nobody can predict what kind of influence this kind of vicious confrontation between the DPRK and the United States will have upon the situation on the Korean Peninsula,” he said….. By doing these kinds of vicious and hostile acts toward the DPRK, the US has already declared war against the DPRK. So it is our self-defensive right and justifiable action to respond in a very hard way. “We are all prepared for war, and we are all prepared for peace. If the United States forces those kinds of large-scale exercises in August, then the situation caused by that will be the responsibility of the United States.” (US-South Korea military drills to proceed despite North Korea’s warning, Associated Press/Guardian, 31 July 2016)

As the U.S.-allied bloc is uncompromising in the objective of regime change, is maintaining a hostile posture (while being consistent in the rejection of numerous N Korean sponsored peace treaty initiatives), is gradually intensifying operations (provocations, military exercises simulating offensive operations, etc.) and is deploying military forces/missile architecture (with the THAAD system configured to intercept higher altitude Chinese missiles, not low altitude N Korean missiles) in preparation for the situation of military conflict, N Korea will continue to have no other option but to enhance its deterrent capabilities (nuclear deterrence being an aspect of this) and to take appropriate counter-measures.

It is also worth observing forms of warfare (economic warfare, information warfare, destabilisation/ regime change operations, etc.) are active, albeit in preliminary stages so far absent of direct military conflict. The U.S.-allied bloc will continue demands that N Korea capitulate (effectively surrender its nuclear deterrent capabilities). N Korea also understand that the regime change objective will remain if it abandons its nuclear deterrent capabilities (regardless of any agreements offered the U.S. which are almost certain to be disingenuous/will not be honoured as is the established modus operandi of the U.S.). Furthermore, the language of pre-emption being used by both sides motivates each side to act first rather than respond after experiencing losses if events escalate to such a point.

The current situation is likely a relative calm. The actions of N Korea reflect recognition of this state of (cold) war that is progressing to a situation of military conflict (despite efforts to prevent this outcome). Peace is a priority for N Korea however it is preparing for an undesired but possible situation of war (indeed, I would argue as escalation is the logical progression of conflict, unfortunately a probable outcome).

Idiot, the “State of War” cited by NK and yourself has existed since the armistice signed in the 50’s. If you do not know “anyting” don’t post Bullshit.

“By doing these kinds of vicious and hostile acts toward the DPRK, the US has already declared war against the DPRK”

“The United States has crossed the red line in our showdown…… We regard this thrice-cursed crime as a declaration of war.”

“The Republic will handle all matters arising between us and the United States from now on under our wartime laws” [Han Song Ryol, director-general of the US affairs department at North Korea’s foreign ministry]

The difference is between a cold war state (non-kinetic) and a hot war state (a declaration justifying the employment of military force/active military conflict/kinetic warfare phase). This is self evident to all but fools (such as yourself). The statements by the foreign ministry can only be interpreted as such.

I am comfortable for others to consider your comments and compare them to my comments and come to their own conclusion as to who is informed and who is the fool. As for you attempt at offense, such behaviour is irrelevant.

P.S. It is also not surprising that you are unaware that your comments and behaviour do more harm to your position than any reply I would make. Communicating with fools and is a waste of time and you are a time waster I have no more time for.

.KCNA Sept 9 2016 9 It was confirmed through ……… the nuclear material usage coefficient

“The standardization of the nuclear warhead will enable the DPRK to produce AT WILL and AS MANY AS IT WANTS of SMALLER LIGHTER and diversified nuclear warheads of HIGHER STRIKE POWER [tritium fusion] with a firm hold on the technology for producing and using various fissile materials. This has definitely put on a higher level the DPRK’s technology of mounting nuclear warheads on ballistic rockets”

The successful test of DPRK weapon using blend of fissile material was able to efficiently reach critical mass necessary to fuse tritium using smaller warhead and with less fissile material. Now the number of critical mass explosives can be smaller use less material have higher efficiency for tritium fusion. Likely it implies that DPRK potential arsenal has doubled or tripled to “AS MANY AS IT WANTS” . The boosted fission warheads are now small enough for artillery rockets. What is “as many as it wants? Russia maintains 1500 deliverable warheads . DPRK would want at least 500 . 500 fission events could not be achieved based on plutonium alone. Blends of fissile HEU and plutonium are used that consume only small amounts weapons grade plutonium. The DPRK arsenal can grow from 50 to 150 to 250 nukes. DPRK has adequate tritium gas. The DPRK nuclear goal likely is between 500 and 1000 warheads with 70 percent deliverable to US . KCNA is saying their goals are within reach , This is 5th nuclear test in 10 years. Pakistan tested 6 nukes and has 130 plus nukes. Likely the DPRK nuclear stockpile is over 100 already on its way to 500