According to a member of the Russian delegation, who has just returned from North Korea, Pyongyang is preparing to test a missile capable of reaching the US western coast.

“In the near future, they are going to carry out, as far as we understand, yet another launch of a missile, but this time with a longer range,” Anton Morozov said, adding that the general mood in Pyongyang is “rather belligerent.”

Morozov is a member of the Russian lower house of parliament’s international affairs committee. He and two other Russian lawmakers visited Pyongyang on October 2-6.

A research group dedicated to analysing North Korea released a new report on hypothetical nuclear attack on Seoul and Tokyo.

The report was released by 38 North, based at Johns Hopkins University’s U.S.-Korea Institute. It estimates that in case of escalation, nuclear detonations over Tokyo and Seoul could result in as many as 2.1 million fatalities and 7.7 million injuries.

According to the report, North Korea may have the capability to arm ballistic missiles with nuclear warheads and has a baseline nuclear arsenal estimated at around 20 to 25 nuclear warheads with yields in the 15-25 kiloton range.

Multiple nuclear weapon detonations on both Seoul and Tokyo based on the current North Korea yield estimates could result in anywhere from 400,000 to 2 million deaths. With possible thermonuclear yields with the same number of weapons, the number of deaths could range between 1.3 and 3.8 million.

The report suggests that were North Korea to launch its entire arsenal against Tokyo (population 37.9 million) and Seoul (24.1 million), casualties in each city could reach as high as 3.8 million.

Great news !!! At last yanks jaapan ant Seoul will be destroyed if they continue bullying N Korea !! Great , let´s see now what the fucking yankee bastards will do !!

thaad will shoot down each of them

have i said what you are?

but you … you are kim´s cocksucker!

You have been watching too many Hollywood movies Solomon.
Reality is all together different when the Genie of War is released and grandiose plans are no more than wishful thinking.

no hollywood, i saw thaad in action. higher level than s-400

You’re talking such utter idiotism.
How the heck you compare thaad, that was NEVER tested in real situations, and s-400, that keep down entire Israeli wings?

IL is pissing on s-400. also russians know, it is not modernsystem more, therefore want have s-500

Talk to my dick, so I can hear you.

Dude, your thinking is convoluted at best. How many NK test launches have been intercepted by thuud/agis thus far? Do you know what the us mod gave as a reason for not shooting down the last NK launch? They said it would have been an embarrassment if they missed!

propably you want to write this about s-400

Ahhhh, so the s400 was supposed to shoot down Kim’s missile tests? I was unaware. I’ll take my leave then.

Your comments on this thread are void of facts.

It was way to high for even S400 I think. THAAD is probably a lot less capable than it’s specs. 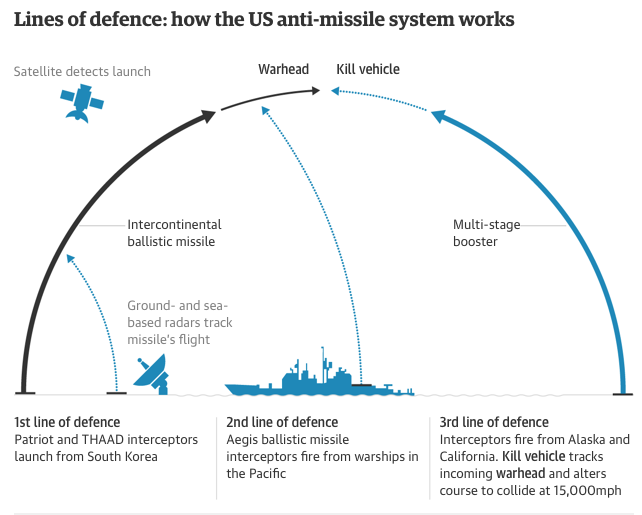 The US provided anti-missile defence systems to Israel and Saudi Arabia during the First Gulf War as protection against Scud missiles fired by Saddam Hussein’s Iraqi troops.

The US system appeared to have clear superiority and it was initially claimed that it had shot down 41 of 42 missiles fired by Iraq. But the claim was later scaled back and eventually it was acknowledged that only a few missiles had been hit.

Recent tests of interceptors have provided little comfort – with success rates of around 50% on average.

The Pentagon celebrated in May when it destroyed a mock warhead over the Pacific. US vice-admiral Jim Syring, director of the Pentagon agency responsible for missile defence, described it as an “incredible achievement”.

Should we be worried?

Writing in 2015, Steven Pifer, an arms control expert at Washington’s Brookings Institution, asked a US official what would happen if a North Korean missile was launched in the direction of Seattle. The official said he would fire a bunch of interceptors and cross his fingers.

NK needs to build up their nuclear arsenal ASAP and then start selling nukes and signing mutual defense treaties with countries that the racist, supremacist, Jewish, genocidal, global, slave, empire, wants to attack, which will prevent many future wars, holocausts and shoas of hundreds of millions if not billions of innocent Goyims by racist supremacist Jews.

The engines and components for these come from the industrial complex around Dnipro & Zap. Oblasts in Central UKRAINE. That industry, under the effective PM Azarov, was meant to service the planned Brazilian space centre. Rabbit Jazenjuk, the former illegitimate PM cancelled those plans at US State behest (Russia and other of the so-called BRICS were also part).

End result, factories took orders elsewhere, the Ukrainian origin of the NoKor rocket engines which are the motors for the Medium Range and ICB Missiles has been established by multiple observers, incl. UA technicians.

Irony, Maidan (Azarov was ANTI-Maidan and a good man also) is what gave North Korea the capacity to hit the West Coast (potentially, at least).

Wow, the Ukrainian’s (Azarov) gave it to N Korea purposefully!
Those are the RD-180’s yeah?
I hear the Ukraine version is only as efficient as the RD-170’s!
No matter.
Apparently the Americans are trying to copy them inside the US so they don’t have to have such a red face when it comes to bulling countries into sanctioning Russia yet they themselves can’t do it when it comes to these engines!

in the 3D world of multiple conflicts, what this really means is, “get out of Syria, get out of Ukraine, get out of the south china sea.”

they are at least 10 years fom icbm.

They tested two of them this summer, moron.

in your head :DD

read my answer him. and for you both: check the missile on the photo. how is put together the corp pf missile. this is milk can, not rocket :DDDDD

and all fell apart.

IF yanks needed 10 years with all resources, NK also.

so, russians are sneaks of yanks :D

When you have a big bad guy(US) with guns there is nothing better than a Good small guy with bigger guns(NK).
Straight from the mouth of the NRA….

this is what you get when you station thousands of US troops and forces and do constant military drills near a country like north korea. you think they like that? you think that makes them feel good or safe?